US election 2020: Where does Pete Buttigieg stand on Middle East issues?

An eloquent military veteran, Mayor Pete wants voters to look past his lack of convention experience 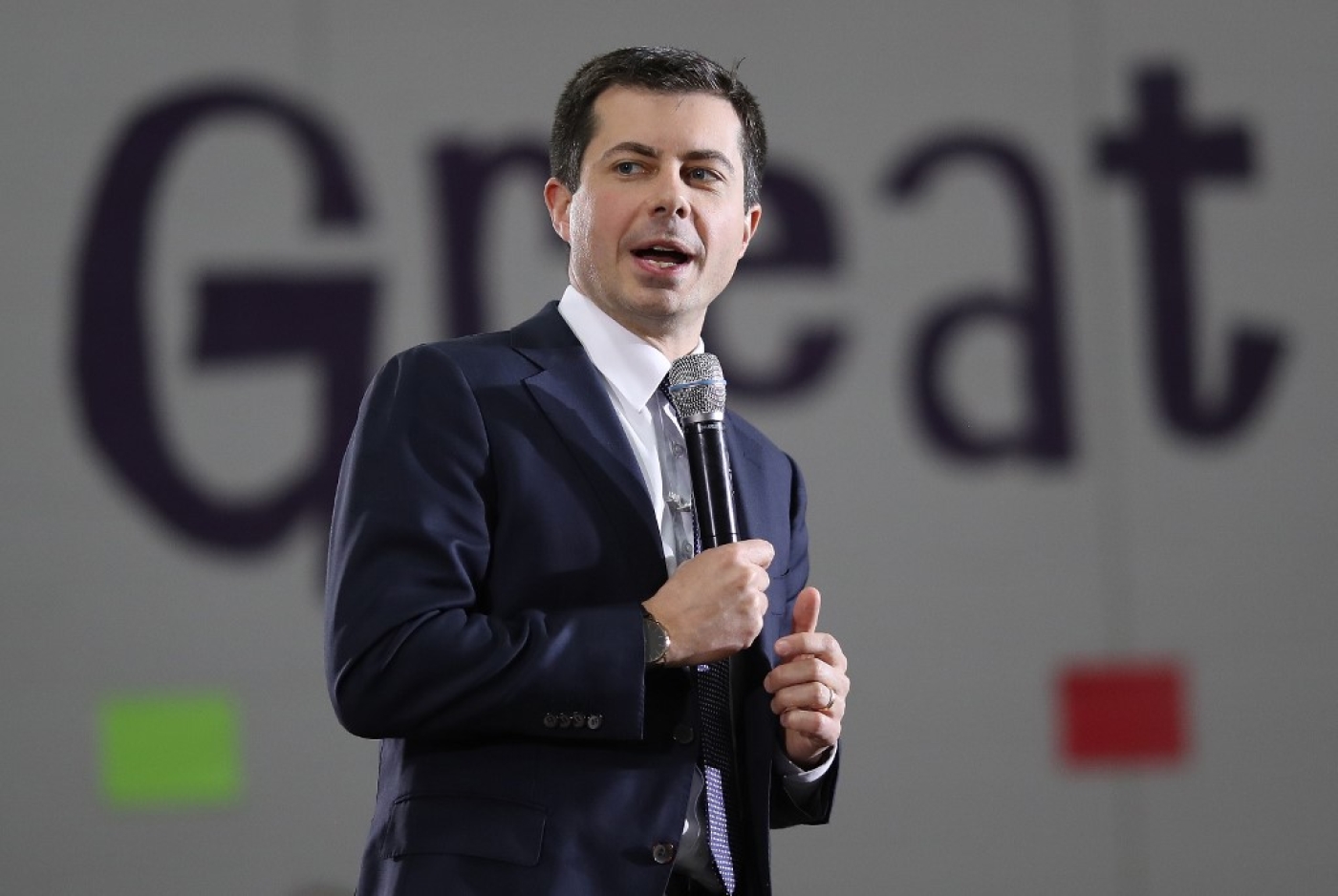 Buttigieg stems from the Arabic words "abu dajaj," which literally translates to father of chicken (AFP)
By
Sheren Khalel
in
Washington

As the former mayor of a town of 100,000 people, Pete Buttigieg's government experience is negligeable compared to some of his competitors who have been in the business of policymaking in Washington for decades.

Yet, the 38-year-old mayor of South Bend, Indiana, has managed to mount a serious presidential campaign, challenging some candidates who entered politics well before he was born.

While serving as a mayor may have provided Buttigieg with some executive experience, when it comes to foreign policy his credentials are thin.

But Mayor Pete has relied on his years in the military, exceptional education and evident eloquence to articulate and promote his foreign policy positions.

The Harvard-educated Rhodes scholar and Afghanistan War veteran has been vocal about his plans.

Following the US's deadly strike that killed Iran's top general in early January, Buttigieg's has touted his own military experience as a valuable asset that would help him with peace and war decisions.

Who is Pete Buttigieg?

The son of two Duke University professors, by the time he was 25 years old, Buttigieg had graduated with top honours from both Harvard and Oxford universities.

During his studies, Buttigeig showed a serious interest in politics, volunteering for both John Kerry's and Barack Obama's presidential campaigns in 2004 and 2008.

Prior to entering the world of politics himself, Buttigieg worked for three years at the consulting firm McKinsey & Company, which has been linked to authoritarian governments and questionable business practices.

In 2012, he ran successfully for mayor in South Bend. That was two years after signing up to become an officer in the US Navy Reserve. So during his first term as mayor, he was called up for deployment to Afghanistan.

He spent 7 months on the ground in Kabul, where his work focused on identifying and disrupting financial support networks for terror cells.

Buttigieg announced his bid for presidency on 14 April 2018 and first rolled out specific details of his foreign policy plan in June during a packed rally at Indiana University.

At the rally he called for an end to never-ending wars, criticised US military spending and announced his intentions to recommit to the Obama-era nuclear deal with Iran that Donald Trump abandoned in 2018.

In his book, Buttigieg, a left-leaning moderate, said he did not think the US's war in Afghanistan was a mistake, but where does he stand on issues relating to the Middle East?

On Saudi Arabia: 'Putting the brakes on that relationship'

Buttigieg, like most of his fellow Democrats, has been an ardent critic of the US's support for Saudi Arabia's involvement in Yemen.

"The United States must stop supporting the Saudi-led campaign in Yemen, which has killed thousands of civilians,"Buttigieg told the Washington Post in March.

"As president, I would suspend all offensive arms sales that could be used in that war, including spare parts for US-made aircraft."

In June, as Congress was battling to pass legislation to do just that, Buttigieg told NBC's Meet the Press that for the time being, the US should consider "putting the breaks" on its relationship with Saudi Arabia.

On the anniversary of Khashoggi's murder in October, Buttigieg tweeted that the US had missed an opportunity to "hold dictators accountable".

On Iran: 'A diplomatic strategy'

"When I was an intelligence officer, I was trained to ask tough questions so that they could be thought through before a decision," Buttigieg said. "We have seen no evidence presented that that took place here."

The former mayor went on to say he thought the assassination was not the "right strategic move".

"This is about consequences," he said. "We need answers on how this decision was reached."

Buttigieg supports a more diplomatic approach to Iran, criticising Trump for leaving the 2015 nuclear agreement and promising to negotiate a bigger and better deal.

"I would take the agreement as a floor, not a ceiling," Buttigieg told the Washington Post.

"Follow-on agreements should extend the timeframe of certain nuclear restrictions, cover Iran’s missile program and address its role in regional conflicts. Discussion of timing of phased-in sanctions relief in return should of course be part of these negotiations."

Buttigieg has compared the current situation with Iran to the rising tensions that led to the Bush administration's Iraq War.

"There's no question that Iran has a pattern of malign activities. There's also no question that there is a pattern that is disturbingly reminiscent of the run up to the war in Iraq, in some cases being driven by the same people," Buttigieg told CNN during the summer of 2019.

On Twitter in September, Buttigieg blamed Trump's "erratic, go-it-alone approach to Iran" for the rising tensions in the region.

"We must focus on a diplomatic strategy to resolve the war and reduce risk of miscalculation with Iran," he said.

On Israel: 'Not a zero-sum game'

Buttigieg has taken the typical stance of the mainstream Democratic party regarding his stance on Israel, backing the two-state solution and holding support for Israel in high regard.

He considers the US alliance with Israel and support for its security to be "fundamental tenets of US national security policy", but he also told the Washington Post that the conflict between Israel and Palestine "is not a zero-sum game".

"Israeli security and Palestinian aspirations are fundamentally interlinked. To visit the West Bank (as I did) and Gaza is to understand the fundamental need for a two-state solution which addresses the economic, security and moral rights of Palestinians who live there and Israeli citizens."

He has also said that he would not reverse Trump's decision to move the US embassy from Tel Aviv to Jerusalem, telling Axios "what’s done is done."

Still, in a Q&A with The New York Times, Buttigieg called Israel’s human rights record "problematic", adding that Israeli policy has been "moving in the wrong direction under the current right-wing government."

He has also criticised what he called Israel's "overreach" in the West Bank and Gaza, calling Israel's dependence on military action "short-sighted".

"The humanitarian catastrophe in Gaza has gone on far too long and provides a ripe environment for the very extremist violence that threatens Israel," he told the Council on Foreign Relations in October.

Like Elizabeth Warren, Buttigieg has said that aid to Israel could be "leveraged" to guide Israel in a direction more "compatible with US objectives and US law".

He later backtracked on these comments, saying that he would not withdraw aid to Israel - just days before the Democratic Party's Iowa Caucus.

The former mayor has ruled out normalising relations with the Syrian government.

"I would not reopen diplomatic relations with this Syrian government under Bashar al-Assad," Buttigieg told The Washington Post.

Instead, he said the US should only take part in negotiations that lead to "genuine progress toward a political transition, an end to all hostilities, protection of civilians and the start of an accountability process".

"The Assad regime is a state sponsor of terror, has targeted its citizens using chemical weapons, and has overseen large-scale torture and execution of its own people."

In December 2019, Buttigieg shot back at his primary rival former Vice President Joe Biden, telling the Iowa Press that Biden had supported "the worst foreign policy decision made by the United States in my lifetime, which was the decision to invade Iraq."

It was not the first time Buttigieg took a jab at his Democratic party members on foreign policy points.

In fact, in June, during his first speech to tackle his in depth foreign policy plan, Buttigieg challenged the Democratic party's foreign policy track record as inconsistent.

For "the better part of my lifetime," Buttigieg said, "it has been difficult to identify a consistent foreign policy in the Democratic Party."

In 2000 - the year he  graduated high school - Buttigieg won first place in the John F. Kennedy Profile in Courage essay contest for high school students. The subject of his essay? One of his current day opponents: Bernie Sanders.

In his essay he praised Sanders for his courage and bipartisanship and for representing John F. Kennedy's ideals of "compromises of issues, not of principles".

As a student he spoke at the "Emergency Anti-War Rally" at Harvard in 2003, a week before the US invasion of Iraq.

"They remind us of a time when we had to take up arms against another nation, and there may be a day we have to again,"then 21-year-old Buttigieg said addressing the crowd, according to an account of the rally in the Harvard Crimson. "But that day isn’t today."

The former mayor's difficult-to-pronounce last name has Arabic roots. His father Joseph Buttigieg was a first-generation immigrant from the Meditranean island of Malta, where they speak Maltese, a mix of Arabic and European languages. The name Buttigieg stems from "abu dajaj" in Arabic, which literally translates to "father of chicken".