Activists have prepared protests against visit by the Saudi crown prince, Mohammed bin Salman, to the UK on Wednesday Only six percent of the British public support UK arms sales to Saudi Arabia, a new poll has revealed on the eve of Saudi Crown Prince Mohammed bin Salman's three-day trip to the country.

According to the survey, commissioned by Campaign Against the Arms Trade (CAAT), there is very little British support for the multi-billion-pound arms sales to the Arab kingdom, despite the thousands of jobs in the UK that are reportedly reliant on the trade.

The polling carried out by Populus also indicated that 37 percent of people in the UK opposed the visit of the crown prince to the UK, with only 21 percent in favour. Twenty-seven percent expressed no opinion.

Activists have been highly critical of the visit by MbS, which takes place as the Saudi-led bombardment of Yemen continues unabated, with over 10,000 people thought to have been killed in the war.

"The regime has carried out atrocities against Saudi people for decades, and has inflicted a terrible humanitarian catastrophe on the people of Yemen. It is time for Theresa May and her colleagues to end their shameful support for this appalling autocracy," said CAAT spokesperson Andrew Smith, in a statement.

He added that recent reforms implemented by MbS - which are expected to see women allowed to drive for the first time and cinemas reopened in the conservative kingdom - were a smokescreen for a harsh crackdown on dissent.

“The overwhelming majority of people in the UK do not share Theresa May’s political and military support for the Saudi regime," he said.

Since Saudi began its air strikes against Houthi rebels in Yemen, the UK has licensed £4.6bn worth of arms to the kingdom.

There have been repeated calls by campaigners for the UK to halt the sales over reports of massive civilian casualties and a spiralling humanitarian crisis in Yemen.

A legal challenge to the arms sales brought by CAAT in July was dismissed by the UK High Court after it ruled that the Saudi-led coalition was not directly targeting civilians in Yemen and that there were adequate procedures in place for investigating claims of civilian deaths.

CAAT told Middle East Eye on Tuesday that a date had been set at the Court of Appeal to seek to challenge the ruling on 12 April. The campaign added that £40,000 had been raised in the last year through crowdfunding to pay for the appeal.

The visit by MbS to the UK has been hailed by the ruling Conservative party as an opportunity for strengthening the already long-established relationship between the two countries.

A spokesperson for UK Prime Minister Theresa May said the visit would "usher in a new era in bilateral relations focused on a partnership that delivers wide-ranging benefits for both the United Kingdom and the kingdom of Saudi Arabia".

Writing in Middle East Eye on Tuesday, Middle East Minister Alistair Burt said Saudi Arabia's involvement in the Yemen war was at the request of the Yemen government and defended UK defence links with Saudi Arabia. "The partnership between the UK and Saudi Arabia has foiled terrorist attacks, directly saving British lives and the lives of others around the world," Burt said.

In a press release published on Tuesday, the Muslim Association of Britain (MAB) called on May to ensure that any trade agreements reached with Saudi Arabia during the visit not be made at the expense of human rights values.

"The issue of human rights must absolutely remain at the very heart of any discussion, trade or otherwise, with Saudi Arabia.

"As you [May] will be receiving the crown prince, hundreds, possibly even thousands of Saudi society’s most revered figures, will have been locked up for their sixth month without any official charges, nor legal representation, family visitation, or any hope of seeing the inside of a courtroom in the foreseeable future."

MbS is set to hold meetings with May, the Queen and heir to the throne Prince Charles.

It is not known whether MbS plans to meet with leader of the opposition Jeremy Corbyn, who has been a long-term critic of Saudi Arabia.

In a statement to MEE, Corbyn said that May should be using the visit to raise human rights abuses with the prince and to call a halt to arms supplies to the kingdom.

"Theresa May should use this visit to announce the UK will no longer supply arms to Saudi Arabia while the devastating Saudi-led bombing of Yemen continues and make clear Britain's strong opposition to widespread human and civil rights abuses in Saudi Arabia," he said.

A spokesperson for the royal family said the Queen would grant bin Salman an audience at Buckingham Palace on Wednesday before a private lunch.

Following talks with the prime minister at Downing Street, the Saudi royal will then attend a dinner at Clarence House hosted by the Prince of Wales. The Duke of Cambridge will also be attending. 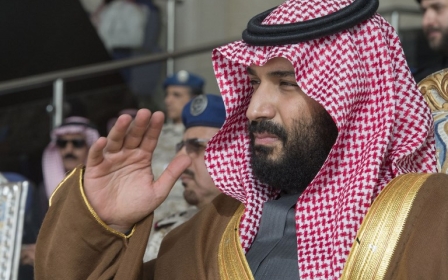 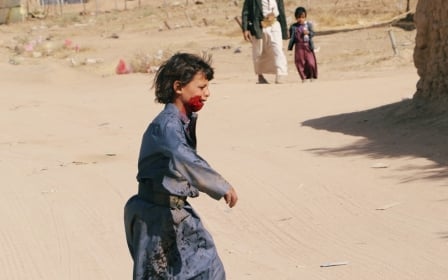