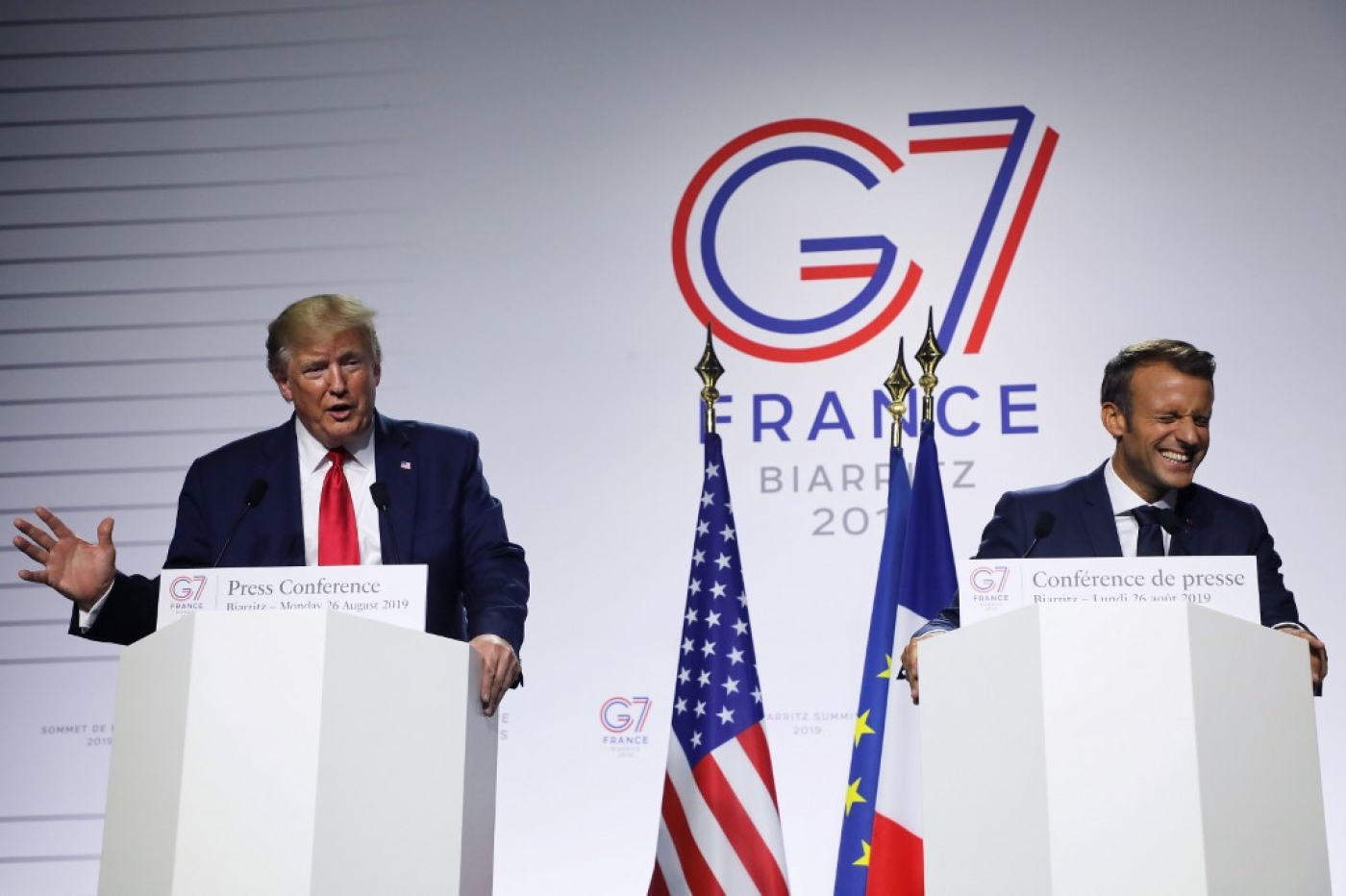 US President Donald Trump appeared to open the possibility of a meeting with Iranian President Hassan Rouhani on Monday, as his tone towards Tehran softened at the G7 meeting in Biarritz.

“If the circumstances were correct or right, I would certainly agree to that,” Trump said of meeting Rouhani at a joint news conference with French President Emmanuel Macron. “But in the meantime, they have to be good players.”

On Sunday, Iran’s Foreign Minister Mohammad Javad Zarif made a surprise arrival in the southwestern French town of Biarritz, where the Group of Seven (G7) leaders have been holding an annual meeting.

Zarif held talks with French, British and German officials, but Trump said it was “too soon” for him to meet the Iranian diplomat, who is under US sanctions.

'We're looking to make Iran rich again, let them be rich, let them do well, if they want'

Macron has been leading European mediation efforts to defuse tensions between Iran and the US since Washington unilaterally withdrew from a landmark nuclear deal with Tehran in 2015 and reimposed economic sanctions on the country.

The efforts seemingly bore fruit on Monday as Trump appeared to tone down his rhetoric on Iran, telling reporters that he was aware of Zarif’s visit and that he “approved” the details of the visit with his French counterpart beforehand.

"I knew [Zarif] was coming in and I respected the fact that he was coming in. We're looking to make Iran rich again, let them be rich, let them do well, if they want," Trump said, weeks after he accused Macron of sending Iran "mixed signals".

The US president, however, said the G7 group had a common goal to ensure Iran does not acquire nuclear weapons and that the world leaders reached a conclusion in that respect. Iran insists that it is not pursuing nuclear weapons.

Macron hailed the developments, warning in a tweet that nothing was certain but the conditions for a meeting between the Iranian and US presidents had been laid.

President Trump and I agree that Iran should never have nuclear weapons. Nothing is certain, but the conditions are such that a meeting between President @HassanRouhani and President @realDonaldTrump could take place – and so that an agreement could be reached. #G7Biarritz

Meanwhile, German Chancellor Angela Merkel said at a joint press conference with Trump that the US had welcomed European talks with Iran but that it was still early to predict an outcome.

Washington has imposed a series of sanctions against Iranian leaders since June as part of the Trump administration’s policy of “maximum pressure” against the country.

The sanctions came in addition to a series of economic sanctions put in place since last autumn on several of Iran's key industries, including its oil, petrochemicals and metals sectors. The UAE steps back from the abyss with Iran
Read More »

In response to the ongoing pressure, Iran has begun scaling back various commitments it made as part of the multinational nuclear deal, while urging European countries - namely France, Germany and Britain - to protect it from US sanctions.

It has given the Europeans until 5 September to come up with solutions before scaling back those commitments further.

Iran has urged the EU to defend it against the renewed American sanctions and a joint European-Iranian mechanism known as INSTEX has been set up to circumvent the US measures.

Still, the heightened tensions continue to cause alarm, with states, rights groups and political observers urging both sides to maintain calm and avoid a direct confrontation.

Iran's President Hassan Rouhani expressed his support for Zarif’s visit in a speech aired live on state television on Monday.

"I believe that for our country's national interests we must use any tool," he said.

"Those who imagine one hand is enough are mistaken. We have to use our military, cultural and economic power as well as political power, diplomacy and negotiation.”