Who has joined the Saudi-led anti-Houthi coalition and why?

From Morocco to Bahrain, the region has responded to Saudi’s calls for intervention against the Houthis in Yemen 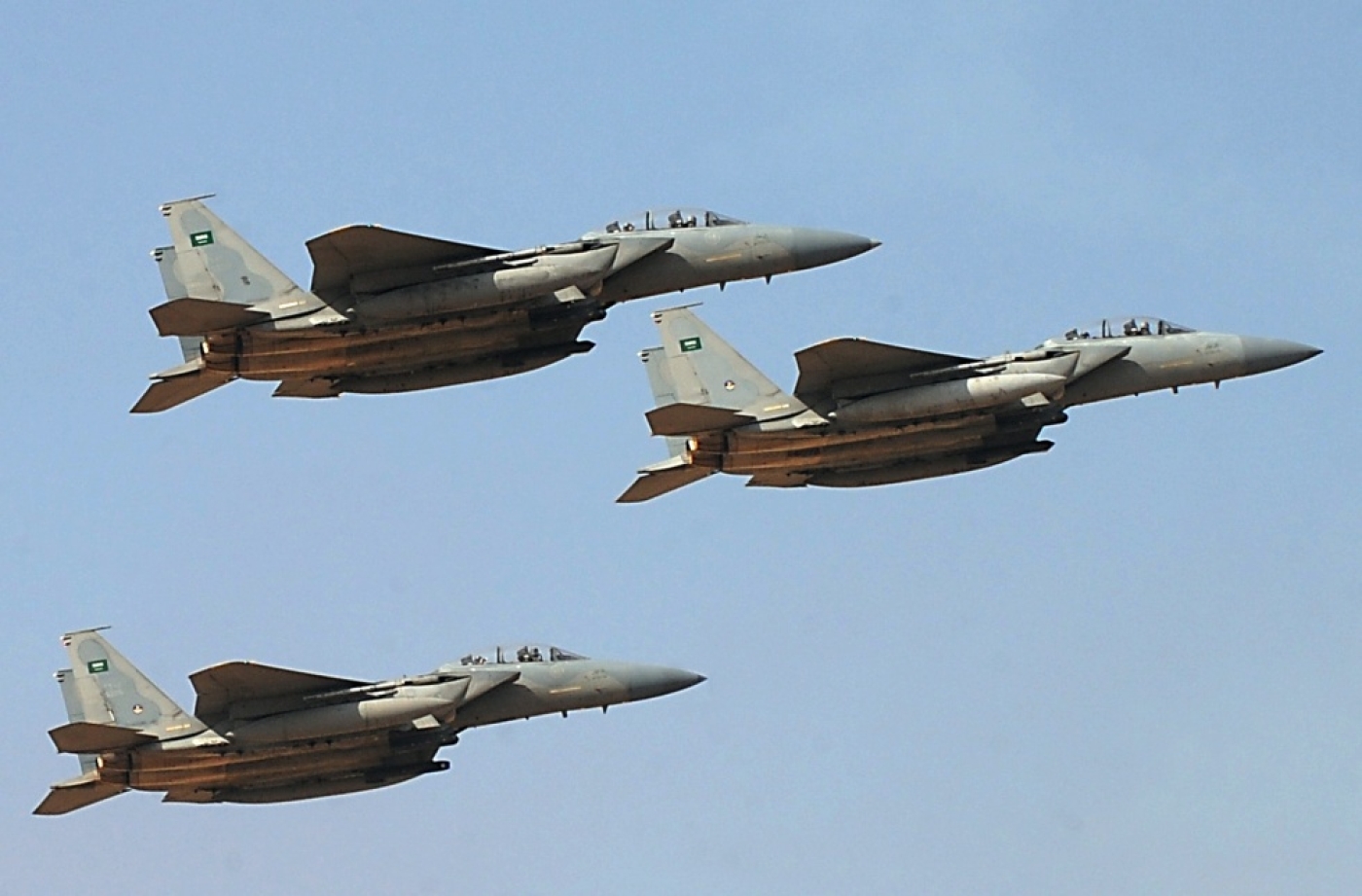 A file picture taken on January 1, 2013 shows jet fighters of the Saudi Royal air force performing during the graduation ceremony of the 83rd batch of King Faisal Air Academy (KFAA) students at the Riyadh military airport, in the Saudi capital. (AFP)
By
MEE staff

This week, Saudi announced that a string of countries have pledged support - ranging from donating jets to offering soldiers - for the country's military action in Yemen.

The campaign is already the largest the region has seen since the US-led 2003 invasion of Iraq, but the speed with which the anti-Houthi coalition was announced surprised many - begging the question who has joined and why?

Arab League member Sudan has previously been an ally of both Iran and Saudi Arabia. However, in the past year, the closure of an Iranian cultural centre and expulsion of Iranian diplomats from Sudan showed a greater shift towards Saudi Arabia and the Gulf States.

According to Harry Verhoeven, a professor of international relations at Georgetown University, Iran has previously supplied Sudan with weapons but the impoverished African state is now more in need of Gulf fiscal support than Iranian military assistance.

“The Sudanese economy has been in recession since the secession of the south in 2011, and the central bank support that Saudi Arabia and Qatar give makes a big difference to the survival of the regime. Iran just doesn’t have the cash at the moment to give that kind of support,” he told MEE.

A staunch ally of Saudi Arabia, and a recipient of billions of Gulf funds since the 2013 ousting of president Mohamed Morsi, Egypt has come out strongly in favour of the Saudi-led action.

Foreign Minister Sameh Shoukri said on Thursday night that Egypt would commit ground troops if necessary, though the president’s office walked back from the pledge on Friday.

The early promise of ground support contradicted Saudi statements, which stressed that there are no current plans to send in boots on the ground. Some reports late on Thursday suggested that Egypt had not been informed of the timing of the offensive, suggesting that Riyadh does not consider it a credible ally.

This difficult history, and Egypt’s precarious economic situation, mean that Cairo must pull off a tricky balancing act in Yemen, according to Sharif Nashashibi, an independent commentator on Arab affairs.

"The amount of financial aid and political support that Saudi Arabia has given [Egyptian President Abdel Fattah] al-Sisi mean that his participation was never in doubt. But Egyptians will be worried about whether they can afford a potentially costly and protracted operation in Yemen. Sisi is trying to balance these two things”.

The tiny kingdom is a chief beneficiary of the kingdom’s military and financial assistance.

While Bahrain was rocked by large-scale protests in the wake of the Arab Spring, its allegiance to Saudi Arabia is believed to have trumped domestic concerns. Saudi, alongside the UAE, sent troops into Bahrain to help crush the 2011 protests against the al-Khalifa ruling family.

“Bahrain's involvement reflects its close ties to Saudi Arabia, which are probably a more important influence on Bahraini decision-makers than domestic public opinion is,” said Jane Kinninmont, deputy head of the MENA programme at Chatham House.

Marc Jones, a Bahrain specialist, also stressed that Bahrain was a willing partner.

“The fact that [Bahrain] is using US intelligence and that Hadi is the Western-backed president for the strikes implies far reaching support for the action, and reduces the likelihood of people accusing Bahrain of engaging in an ideological war against what are perceived to be the Iranian-backed Houthis,” Jones said.

“Naturally, the Iranian support for the Houthis is a big reason for both Saudi and Bahraini intervention, as [it is] perceived as Iranian expansionism by the Bahraini authorities. It also adds credibility to the erroneous argument that the Bahraini government used to explain the 2011 uprising, which stated that the protests were part of an Iran-inspired plot.”

While tensions between Riyadh and Doha seemed to reach a nadir last year, they have been improving in recent months and could even be “back to normal” as the Saudi ambassador to Qatar has claimed.

When Saudi announced the campaign Qatar quickly fell in line with the rest of the GCC – with the exception of Oman – and pledged their commitment to President Abd Rabbuh Mansour Hadi.

“We pray to Allah Almighty to preserve Yemen and its brotherly people and protect it from seditions and foreign interference, which does not want the good neither for Yemen nor our countries, also praying for restoring security and stability to the dear people of Yemen,” the joint GCC statement said.

A firm Saudi ally, Kuwait was quick to back the action. Foreign Minister Sheikh Sabah al-Khaled al-Sabah said the Houthi offensive "obliged all of us to quickly respond and take the required measures to restore peace and security."

While Kuwait has a large Shiite majority, it has historically been better integrated in comparison to Shiite minorities in the Gulf. Tensions, however, do occasionally boil over and there has been increasing concern over growing Iranian influence that appear to have on occasion resulted in crackdowns on Iranian nationals or alleged Iranian backers.

The UAE has been one of Saudi Arabia’s closest allies, with the two most recently forming a front against the Muslim Brotherhood and joining forces to prop up Egypt’s Sisi with loans.

However, much of the driving power behind this close relationship is said to come from Abu Dhabi emir and UAE president Sheikh Khalifa Bin Zayed al-Nahyan and his camp.

Dubai, however, has traditionally taken a more open stance toward Iran, even saying that it wanted international sanctions lifted.

"You see, Iran is our neighbour and we don't want any problem and they didn't have any problem," Dubai ruler Sheikh Mohammed bin Rashid al-Maktoum, told the BBC late last year.

A British diplomat who worked in the Gulf told the BBC that "there is a huge Iranian community in Dubai, and huge trade there, so they take a different approach."

Pledged: 6 fighter jets. Saudi has reportedly also discussed the prospect of Jordan committing ground troops, although Amman has as yet made no comment about this.

In recent months, Jordan has been a key member of the anti-Islamic State coalition flying missions over Syria and is known to have a well-trained army and security services.

Sara Williams, an Amman-based journalist and MEE contributor, believes that Jordan’s readiness to join the Saudi-led coalition in Yemen is an extension of the Hashemite Kingdom’s desire to play a more prominent role on the world stage and the emerging Sunni détente in particular.

“Egypt is in turmoil and Saudi doesn't have a legitimate claim to being a moderate Sunni regional power, so there looks to be an opportunity for Jordan to step forward as the lead moderate Sunni power,” she said.

“The more involved Jordan can be involved in regional politics right now – especially when it concerns Western interests – the higher a profile the country will have. And a higher profile means more money.”

“Jordan doesn’t have a lot of money or a huge army, but geography is working in its favour.”

Rabat said it has "put at the disposition" its warplanes already based in the United Arab Emirates and partaking in US-led strikes against IS.

Morocco said in a statement it would “provide all forms of support” to “sustain legitimacy” in Yemen in order to help "remove Yemen from the crisis in which it is mired.”

It added that it wanted to "stand up to all foreign conspiracies woven against the country, and against Gulf and Arab security."

As the foreign ministry pointed out, Morocco has a "multidimensional strategic partnership" with the GCC. In 2011, the GCC invited Morocco and Jordan to join the group and while this failed to materialise, the GCC created a $5bn assistance fund for the two monarchies.

In recent years, Morocco has also been busy trying to present itself as a regional North African power and trying to expand its diplomatic and security influence.

While not an Arab-majority country Pakistan has long-established security links with Saudi Arabia and Riyadh has asked for Islamabad’s assistance.

Most likely due to domestic issues and a volatile security situation, Pakistan has so far not publically joined the campaign although it has vowed a “strong response" to any threat against Saudi Arabia.

“Pakistan enjoys close and brotherly relations with Saudi Arabia and other [Gulf] countries and attaches great importance to their security,” the statement by the prime minister’s office said.

Military cooperation first began in the 1960s when Pakistan helped the Saudis build up their air force and in 1969, the Pakistani Air Force pilots helped to repulsed a South Yemeni incursion into the kingdom. Since then thousands of Pakistanis have served in the Saudi military. Most recently, Saudi helped to recruit Pakistani troops to quell the pro-democracy uprising in Bahrain that broke out in 2011.

“Pakistan has been involved in Arab military wars for the past 40-45 years, but is now taking a more sectarian stance,” said Kamal Alam, a fellow at the Institute for Statecraft on Middle East Region Defence and Security Issues.

“With 35 million Shiites, Pakistan has historically stayed away from sectarian conflicts in the Middle East. But now - because of the desperate economic situation and the billions of dollars its modern army needs every year in upkeep most of which comes from the Gulf - Pakistan will [likely agree to] get money in return for its support.”

Shane Farrell, an independent Istanbul-based risk analyst also added that: “It's important to note that Saudi funds large parts of Pakistan's nuclear programme... In case Iran becomes a nuclear power, Saudi will likely become the recipient of some of these warheads.”

Turkey’s President Recep Tayyip Erdogan on Thursday said that he supported the Saudi-led intervention, even suggesting that "Turkey may consider providing logistical support based on the evolution of the situation."

While Turkey and Saudi have long been some of the most vocal critics of Syrian President Bashar al-Assad and have advocated for his removal, they have previously clashed over Ankara’s support for the Muslim Brotherhood in Egypt and Riyadh’s support for President Sisi.