As fighting has lessened in recent months, Yemenis say the economic war being waged is just as devastating 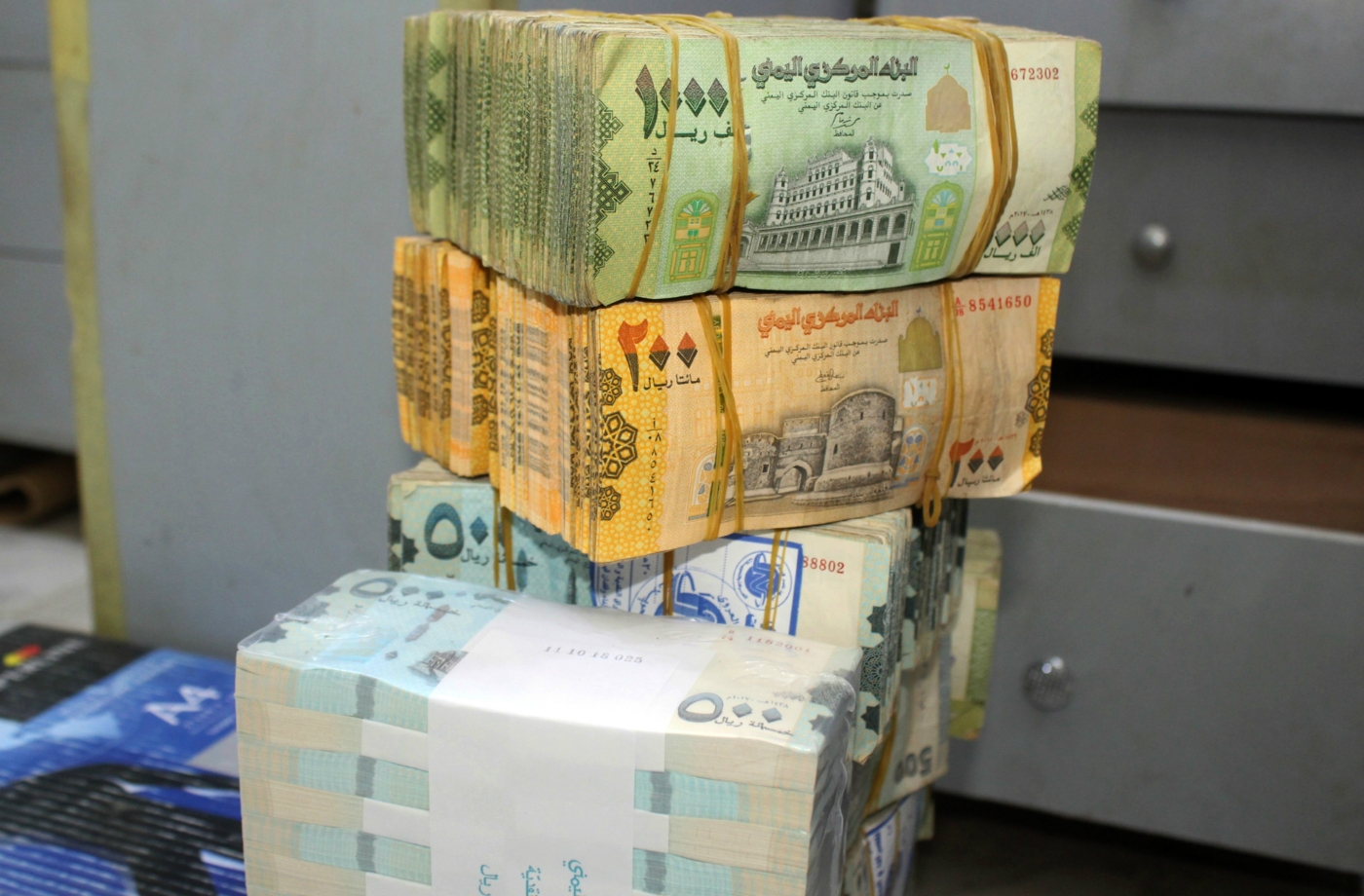 Old and new banknotes at a currency exchange in Aden (AFP)
By
MEE correspondent
in
Sanaa, Yemen

While the violence of the war in Yemen generally captures the headlines, and has lessened in recent months, escalating in the background is an economic battle that has further impacted the suffering of many Yemenis.

In January, Houthi authorities banned the circulation in their areas of new currency printed by the government-run Central Bank in Aden, essentially creating two central banks competing for control over the Yemeni rial.

The ensuing dual monetary policies has led to different exchange rates between Sanaa and Aden which, according to the Sanaa Center, had reached a record high by the end of August, with the rial valued at 33 percent less in government areas than in Houthi areas. 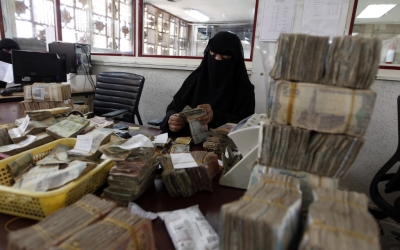 The rial is currently trading at YR625 to the dollar in Sanaa, while in Aden the rial has reached YR830 to the dollar.

Prices of goods have skyrocketed in government areas due to the currency collapse.

For their part in the economic battle, the Saudi-led coalition, which supports the internationally recognised government in Aden, has stopped issuing clearances for fuel ships to offload in the port of Hodeidah, which is under the control of the Houthis.

According to an oil company in Sanaa, some fuel ships received approval from the United Nations a few months ago, but the coalition did not allow them to dock at the strategic port and only a few have been offloaded.

This Saudi-led siege has led to a severe fuel crisis in Houthi-controlled areas and almost all petrol stations were closed last week.

'The military war is useless'

The currency ban and blockade of Hodeidah have had a profound effect on the lives of Yemenis.

Ghalab Mushir, 45, a plumber in Taiz and a breadwinner for his seven family members, confirmed to Middle East Eye that the battles around the divided city had almost stopped amid a de-escalation in military activity.

- Ghalab Mushir, a plumber in Taiz

However, Mushir said: “I believe that the warring sides are using a new war which is more dangerous than the military one.

“The military war is useless for warring sides as they lose fighters, money and by the end they may not advance.”

He explained that since the Houthis' rejection of the new banknotes, prices have been steadily increasing in the markets and many people cannot afford to buy enough food.

“The Houthis rejected the new banknotes as a kind of economic battle and they succeeded in this battle to deprive millions of Yemenis from getting enough food,” said Mushir.

“I myself used to buy fruit, meat and fish for my family, but nowadays I can hardly provide my family with basic food.”

“Our incomes are still the same, and there are less chances of work nowadays. While food prices are increasing, so many families cannot afford to buy enough food,” said Mushir.

He pointed out that when fighting arrived in an area, residents could flee to a safe place. But people could not flee the economic war, as all people were impacted.

“When the battles approached our neighbourhood in 2017, I took my family and fled our home, but we can’t flee the economic war,” he said. 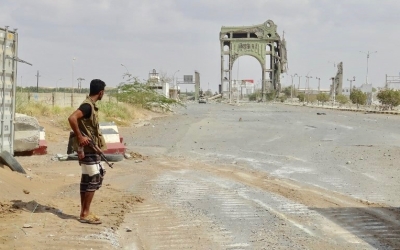 He said the poor and people with limited incomes were always the victims of war, and that is what was happening now.

Mushir blamed the Yemeni government for the people's suffering as they had issued the new banknotes that the Houthis refused to accept and this had led to the increase in food prices.

“I hope that the government solves the problem of the currency as the prices are increasing and people do not have a source of incomes to face this increase,” he said.

Abdul Rahman Haroon, a trader in Taiz, confirmed that many people could not afford to buy food amid the price increases, but said that there was nothing they can do.

“We fixed the prices in US dollars and when the exchange rate changes the prices are changing accordingly," Haroon told MEE.

"This is to avoid a loss as it isn’t safe to deal in the Yemeni rial. We buy the goods in USD so the prices don't increase but the Yemeni rial has collapsed.”

Haroon said that many people who used to buy a whole sack of flour now only buy in kilos as they can’t afford a sack.

“Also we stopped lending to people as that will lead to our loss. When I lend to someone today and he pays me back after a month, the prices won’t be the same then,” he said.

On the other side of the economic conflict is the Saudi-led coalition's blockade of Hodeidah.

Earlier this month, all petrol stations in Houthi-controlled areas were closed and the price of 20 litres of petrol increased to up to YR20,000 ($32) on the black market.

On Friday, some petrol stations reopened after a fuel ship offloaded in Hodeidah. But the queues for petrol stretched as far as the eye could see and drivers spent the night in their cars queuing in order to be allowed to obtain just 30 litres.

A source at an oil company in Sanaa, who wished to remain anonymous, told MEE: “[The Saudi-led coalition] and the government are besieging Yemenis by preventing fuel ships from offloading in Hodeidah. 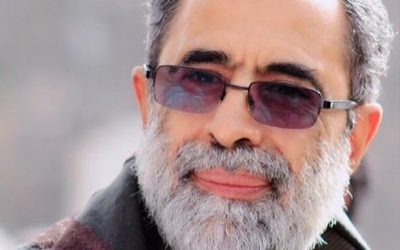 “This is a kind of economic siege that the aggressor countries have been imposing on Yemen since 2015.”

The Houthis have accused the government and the Saudi-led coalition of preventing 15 fuel ships from offloading in Hodeidah, arguing that the vessels had been given permission by the United Nations Verification and Inspection Mechanism for Yemen (UNVIM) to do so.

Djibouti-based UNVIM was set up in 2015 after the coalition accused the Houthis of smuggling Iranian missiles and arms through Yemeni ports, including Hodeidah, under their control, a charge both the Houthis and Tehran deny.

The oil company source said: “Yemenis are struggling to find fuel and if the aggressors don’t give clearance to the fuel ships, that means hospitals, water corporations and other institutions will be impacted.”

He called on the international community to intervene to lift the siege of Hodeidah and allow the fuel ships to offload.

Commenting on the blockade, a source in the government's information ministry, who wished to remain anonymous, told MEE: “When the fuel ships offload in Hodeidah, the Houthi militia would seize the contents of those ships.

“That’s why no ship should go to Hodeidah seaport, and all of them should go to Aden and from there fuel can be sent to Sanaa and other provinces.”

Abdul Nasser al-Qaabi, a taxi driver in Sanaa, told MEE that he had lost work during the last few weeks and now was unemployed.

“Even if there is fuel in stations, I need to sleep for days in my car just to refill 30 litres. It is suffering without any benefit.”

'We thought there was an intention by the warring parties to end the war. But we recently realised that they had started an economic war'

Qaabi is now offering his car for sale and he is planning to leave Yemen for Djibouti.

“The air strikes have recently stopped targeting Sanaa and we thought there was an intention by the warring parties to end the war. But we recently realised that they had started an economic war," he said.

“In all kinds of war, civilians are the main victims. I believe that Yemen isn’t the best place to live in.”

Hisham Safwan, who used to work in a government bank and now owns a currency exchange company, told MEE that the economic war in Yemen was not new, as it had been happening since 2015, but that nowadays it was more visible.

“The economic siege of Yemen, the closure of the ports, the prevention of dealing with the newly issued banknotes, all these are a kind of economic war," he said.

“If the fighting will impact specific people in some areas, the economic war will affect the whole population of the country.” 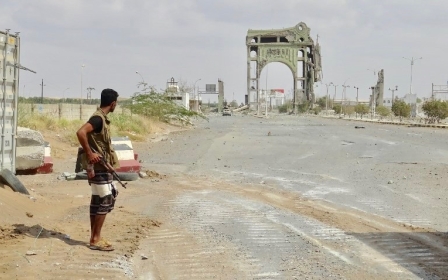 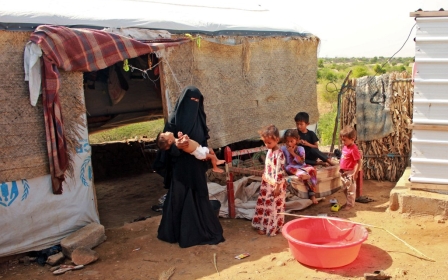 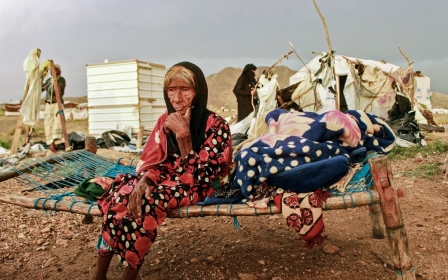