Yemen's footballers, winning against the odds Players from Yemen's national football team on a boat with refugees in the Gulf of Aden, crossing from Yemen to the African nation of Djibouti, 2 June 2015 (MEE/Mohamed Al-Khamisi)
By
Tom Finn

DOHA - On a hot day in June, Miroslav Soukup strode into a conference hall in the Sheraton Hotel in Doha, switched his phone to silent and turned to face the dozen or so men in red tracksuits seated before him.

“I don’t want to labour on the details, just to say we did our best. Ok, we lost the game, but every player from the first to the last minute gave their all. I believe that.”

Soukup, a veteran football coach from the Czech Republic, is the manager of Yemen’s national football team. Yemen had just lost 1-0 to North Korea in a World Cup Qualifier match held in a gleaming stadium in the Qatari capital.

“Our situation is not easy. I’ve told you before, we must be positive, try to look forward. You’ve overcome huge obstacles. Inshallah, we can do this,” he said.

In May, Yemen’s football team caught the world’s attention when photographs posted on Facebook showed players on the cramped deck of a boat alongside dozens of refugees crossing the Gulf of Aden – a dangerous stretch of water that separates Yemen from the Horn of Africa.

Saudi Arabia had launched a bombing campaign against Houthis in March prompting a civil war and halting all flights in and out of the country. With the World Cup qualifiers approaching, Soukup and the team had faced the difficult choice: miss the game and risk disqualification or brave the 18-hour crossing to Djibouti from where they could fly to Qatar.

In one of the photographs from the boat, Ala al-Sasi, a 23-year-old midfielder, sits on the deck in three-quarter length shorts flashing a thumbs up, the sea and the cliffs of Aden in the distance behind him.

“At the time, we didn’t think of it as something heroic," said al-Sasi. "Sanaa airport was bombed, the Saudi border was shut. We just had to make it to the game,” said al-Ani. "Our struggle as footballers goes a long way back”.

Bullets on the pitch

Yemen’s football team have rarely made the headlines. In their debut match as a club at the 1965 Pan Arab Games in Cairo, they lost 9-0 to Sudan. A year later, in 1966, when Yemen entered the Games of the Emerging Forces – an alternative to the Olympic games set up by Indonesia – they lost 5-3 against Palestine, 8-0 to Cambodia, 9-0 to North Vietnam and 6-0 to China.

Since then, few resources have been devoted to the sport. There are no grass pitches in Yemen. Power outages and sandstorms often disrupt practice. The Yemen Football Association, widely seen as corrupt, was suspended by FIFA in 2005 due to “serious interference by political authorities in the internal affairs of the association”.

Then, after years of crashing out of the Gulf Cup of Nations - a regional tournament hosted by Yemen’s oil-rich neighbours, the team became known in Yemen as “Abu Nukta” - a kind of banana with black dots on it that look like zeros.

When mass protests broke out in 2011 against President Ali Abdullah Saleh, games were cancelled and Yemen’s team was forced to travel to the United Arab Emirates to play their home matches. The head coach resigned and Yemen sank to their lowest ever position on the FIFA rankings at 186. In the following year, Yemen’s football association signed Miroslav Soukup as manager.

Soukup, a pale, imposing man in his fifties, spent a decade managing clubs in Prague and a year coaching Egypt's under-20s. Arriving in Yemen, he shook things up. His first move was to order new try outs to join the team. Historically, they had been manipulated by sheikhs and powerful politicians lobbying the association to get the players from their district into the team. Soukup also started a daily training regime, organised friendlies and brought on board a Swedish physio.

“We built the team from the bottom up, like a pyramid,” said Soukup. “We got the players fitter, talking to each other more on the pitch. We started to move ... we started to score.”

After rising 21 places in the FIFA rankings, the team was preparing to travel to Indonesia for a friendly match in September 2014, when the Houthis entered Sanaa. Thousands of militiamen loyal to the Shia group from the north swept into the capital.

With military and financial support from Saleh, the Houthis plundered army bases, shelled the state broadcasting station, and captured the airport and government ministries. Even so, as clashes broke out across Sanaa between the Houthis and government troops, the team continued to attend training, crossing the city in a bus that often got held up at checkpoints and turned back by Houthi fighters.

Hossam al-Sanabani, a businessman who works closely with the Yemeni squad, recalls sweeping bullets and debris off the pitch at the start of training sessions.

“Every day, I would take the box that the players kept their shields and trophies in and fill it with bullets,” he said. “Afterwards, we threw the bullets in the garbage.”

'From the airport to the palace'

In November, after the Houthis toppled the government and consolidated their grip over the country, the team boarded a flight to Riyadh for the 2015 Gulf Cup of Nations. Yemen were the cup’s surprise package. Despite being ranked last, they held both Bahrain and then Qatar, the tournament’s favourites, to goalless draws, before losing to Saudi Arabia in a close match during which Yemeni fans famously outsang the host crowd.

It was the first time in Yemen’s history that they had scored more than a point in the cup.

“We were the shock of the tournament,” said Rafat al-Akhali, Yemen’s minister of youth and sport, who resigned after the Houthi takeover.

“Yemenis who thought their country was doomed suddenly felt this pride. They had held their own against teams like Qatar with millions of dollars behind them. There were huge celebrations; people dancing in the streets. For a week, everyone just forgot about the war,” he said.

On their return from Saudi Arabia, the team were greeted at Sanaa airport by a delegation of ruling party officials in suits, standing in front of hundreds of supporters waving flags and banners.

After years of scraping by as professionals on meagre salaries and largely being ignored, the players were at last celebrities. Journalists jostled for interviews, ministers posed with the team for selfies and tribal sheikhs offered the players pieces of land. In a show of support, the prime minister, Khaled Bahah, posted a photograph of himself on Facebook, wearing the Yemeni strip and holding a football.

“Everyone leapt on them,” said al-Akhali. “Some were proud and wanted to revel in their performance, but there were obviously other motives, too.”

Saleh, the only dictator ousted during the Arab uprisings and still at large, moved the swiftest, announcing - and later paying - a reward of half a million Yemeni Rial ($2,250) for each player and inviting them all to his residence in the capital for lunch. Hadi, who declined an earlier offer to meet the team, later announced his own prize: one million Rial ($4500) for each player, and an invitation to the presidential palace. According to several of the players, Hadi never paid the players the money.

When the Houthis began pressing south toward the southern port city of Aden earlier this year, Saudi Arabia unleashed it’s bombing campaign, hitting airports and army bases seized by the Houthis but also critical infrastructure (including a dairy factory, a high school, a ministry building and a camp for the displaced) resulting in the deaths of hundreds of civilians.

In May, a week after the team escaped by boat to Qatar, news came through that the Football Association headquarters and a stadium in the central city of Ibb - one of only four in the country - had been destroyed by Saudi airstrikes.

Photographs of the stadium - which a Saudi official claimed that the Houthis had been using to store weapons - showed smoke rising from the multi-coloured seats, now black and burnt. The result of these attacks for the team, Soukup said, is that for many of the players, stepping onto the football field is often overshadowed by the thought of bombs dropping near their homes.

“Everything is destroyed in the war. The grounds, the domestic league…everything. How can they focus on football when their country is being bombed? I tell them ‘when you're on the pitch, try your best to forget the war and enjoy the game'.”

Aside from one player who didn’t want to leave his family behind, the entire squad, who hail from provinces across Yemen, made it out to Qatar for the World Cup Qualifiers. After losing to North Korea, Yemen were beaten 2-0 by the Philippines.

For Mohamed Bokhsan, a 21-year-old son of a cotton farmer from Abyan province who plays central midfield, the footballers' ultimate victory was not on the pitch.

“Even if we lost, we tried out best," he said. "We brought people together in a time of war.” 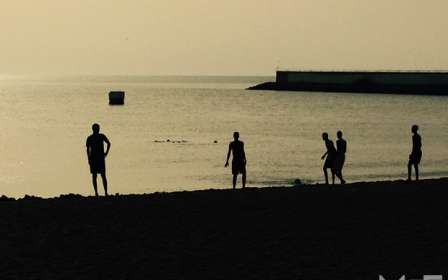