Blair and the Gulf neo-cons

David Hearst
Is it wise to reduce the choice Arabs face to jihadists and fascist military generals? 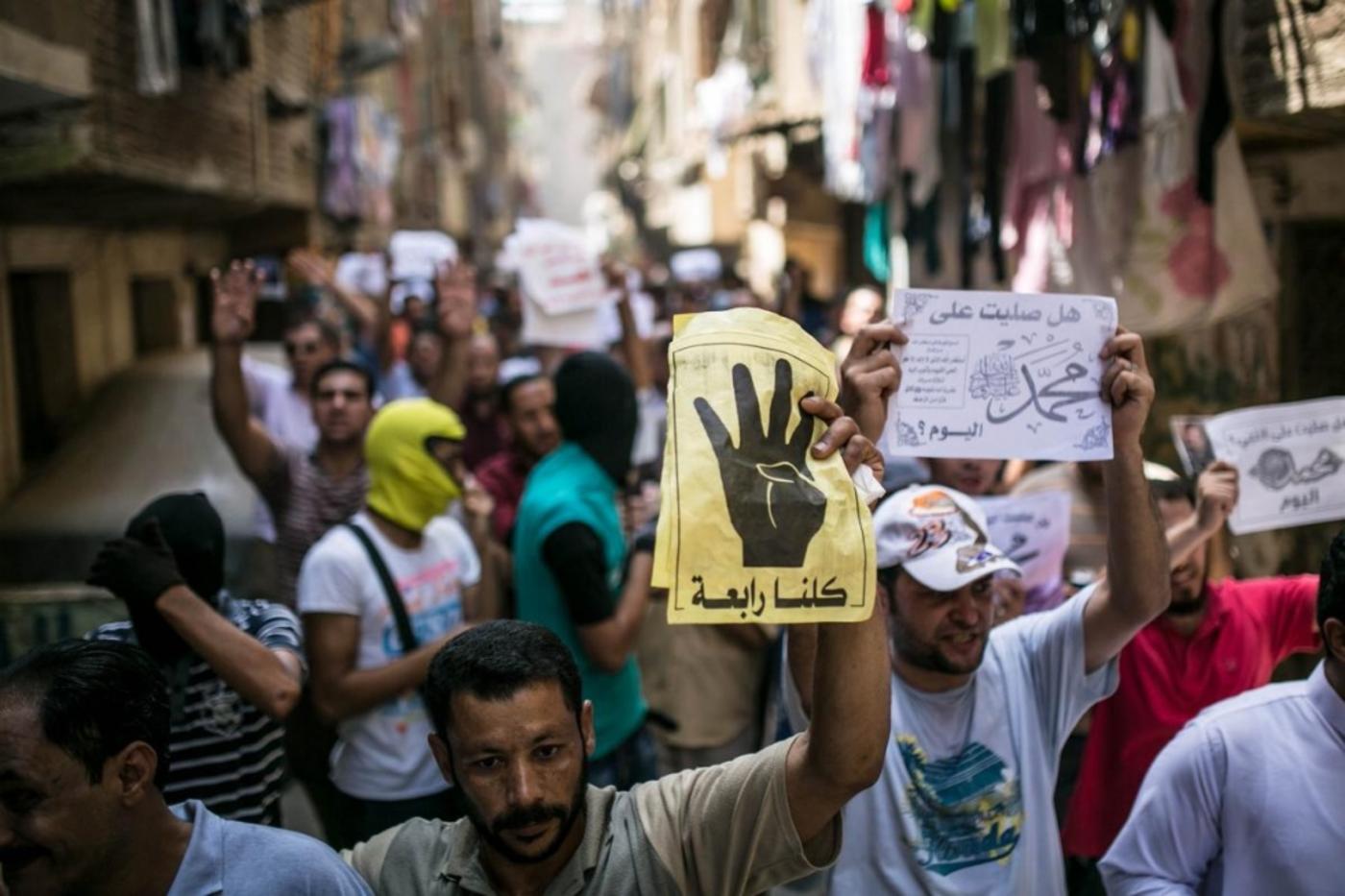 A year on from the coup that brought Egypt's encounter with democracy to a premature end, the country is locked into a state of crisis. The prisons are full. Egypt's social fabric is being ripped apart, and the rents go right through into the family home. Fathers refuse to talk to daughters, couples have split. A year on, no one can describe Abdel Fatah al-Sisi as a unifying figure. His is, and will be, a presidency stained with blood and tears.

Waging war on one's own people requires foreign enemies and the new Egyptian president has been quick to identify them. From day one, he has framed his bid to eradicate the Muslim Brotherhood at home as part of a campaign to combat Islamic radicalism abroad.

Sisi, and his circle of international backers - King Abdullah of Saudi Arabia, the Emirati Crown Prince Mohammed bin Zayed al-Nahyan, and our own Tony Blair who has resurfaced as one of Sisi's advisers - have now formed what amounts to an organised and financed neo-conservative group in the Gulf, a GNC.

Blair consciously evokes September 11. The invader of Iraq is so unapologetic about his actions a decade ago, that he believes Western failure lay in not finishing off the job he had started. Incredibly, this man still goes under the title of Middle East Peace Envoy.

But a decade on from the Iraq invasion, Western public opinion inhabits a different world. It is one shaped by the memory of the deceptions used in justifying intervention, the cost Iraqis have paid in lives, and a decade of military failure. Today's generation has lost its faith in nation building. Blair may find "chemistry" with a Emirati Crown Prince but the former prime minister is toxic to his own people.

The policies which doomed George W Bush's first presidential term have been inherited and aped by America's closest military allies in the region. And that presents a problem to all those - like President Barack Obama who have defined themselves as post Bush. It is a practical and immediate problem : What would happen to militant Islam if political Islam was indeed crushed by America's allies ? What would happen to Egypt if a year from now, Sisi succeeded in wiping out the Muslim Brotherhood?

A year ago, the Brotherhood had three clear options. They could, as the Egyptian army expected them to do, have gone back quietly to prison. This happened at least four times before in history when faced with major state repression in 1948, 1954, the 1980's and under Mubarak. Reformism, the belief the state can be changed from within, was all too deeply ingrained in the Brotherhood's thinking and they could have accepted the military yoke.

They didn't, to their credit. But neither did they dissolve, and nor did they chose violent resistance. They chose a fourth path - to keep struggling in peaceful demonstrations and sit-ins, and in campaigns of civil disobedience. By doing this, the Brotherhood have kept their political base in tact. All reliable polls such as Pew attest to this.

But what would have happened if the Brotherhood caved in a year ago?

Iraq is one antecedent. The Muslim Brotherhood cooperated with Paul Bremer, Iraq's viceroy after Saddam. The Iraqi Islamic Party - the political wing of the Brotherhood - was then largest Sunni political party. Almost as soon its Secretary General Muhsin abd al-Hamid agreed to be one of five Sunni members of Paul Bremer's Iraqi Governing Council, Sunnis flocked to the resistance. Since then the takfiris , whether represented by al-Qaida or now by the the Islamic State, have grown in strength.

Syria is another example. The Brotherhood were the dominant Islamist force until they were crushed in the 1980's by Assad's father. They have no military fighters now, and that gap has been filled by jihadists. Its the same story in Libya, where the Muslim Brotherhood have no military wing, and who have been decimated at the last elections.

Now contrast that with Turkey, Egypt, Tunisia and Morocco , who have Islamists engaged in pluralist, democratic politics and who want to engage with the world. Even where Islamists have a military wing, such as Hamas in Palestine, the same principle applies. Hamas is dominant in Gaza to extent that groups affiliated with al-Qaida are weak. In one operation a mosque was encircled and destroyed by Hamas after negotiations failed. If Israel succeeded in destroying or enfeebling Hamas, where would its supporters go? This is a one way street and it does not lead back into the arms of Mahmoud Abbas.

In its announcement of the Caliphate on Sunday , the Islamic State had harsh words for any other Islamist movement: "As for you, O soldiers of the platoons and organisations, know that after this consolidation and the establishment of the khilāfah, the legality of your groups and organizations has become invalid. ...So let those leaders be ruined. And let that "ummah" they want to unite be ruined - an "ummah" of secularists, democrats, and nationalists... an "ummah" of murji'ah (a sect that excludes deeds from faith), ikhwān (the "Muslim Brotherhood" party), and surūriyyah (a sect influenced by the ikhwān claiming to be Salafī).

So its not just the Saudis, Emiratis and Sisi who seek the end of the Brotherhood. Abu Bakr al-Baghdadi wants to join in as well. Is it really in Western interests for him to succeed ? Is it really wise to reduce the choice Arabs to jihadists and fascist military generals? Is that a recipe for peace in the Middle East? Is that what David Cameron wants, if he stopped to think it through? Does he really want to suppress the one political Islamic force capable of calming the situation down?