The bombing of hospitals makes a joke of international humanitarian law

Federica Marsi
The Kunduz air strike reveals the hypocrisy of powers who pay lip service to international law, but won’t hold themselves accountable 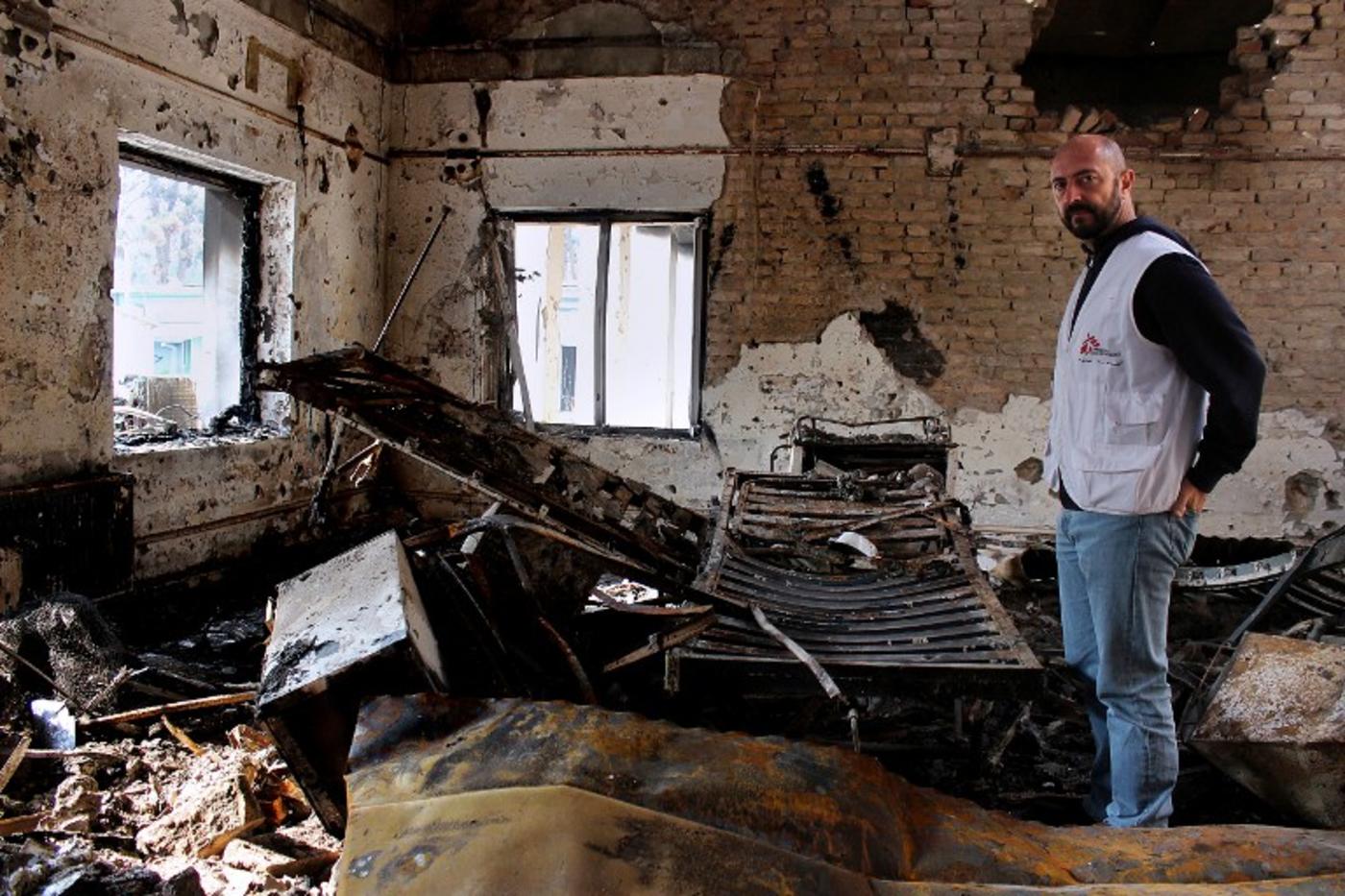 In the early hours of 3 October 2015, the surgeons of the Doctors Without Borders (MSF) hospital in Kunduz, Afghanistan, were relentlessly providing assistance to swarms of patients in need of surgery.

A few days earlier, fighting had escalated after the Taliban seized the city and the US launched an aerial intervention in coordination with the Afghan army to regain control. The sound of incessant pounding was a background noise to which MSF’s medical staff had grown accustomed.

At around 2am, a blast in the intensive care unit crushed the sense of relative security that international humanitarian law had granted. Two hundred and twenty-one artillery shells from an American AC-130 killed 42 people – the worse death toll suffered by MSF in a single incident – and destroyed the only trauma centre in northeastern Afghanistan.

What sets the Kunduz air strike apart, though, is not only its death toll. Added to this was a display of hypocrisy following the attack as all the parties involved revealed an unwillingness to be held accountable for breaching the same humanitarian law to which they pay lip service.

If justice depends on the ability to enforce punishment on a perpetrator, the Kunduz case demonstrates instead that injustice is the rule of law. Four out of five UN security members are signing resolutions condemning the air strikes with one hand while, with the other, they are bombing medical facilities in conflict zones including Syria, Yemen and Afghanistan.

In the year since Kunduz, hospitals in war zones have come under systematic attack. "Over the past year, we recorded 77 attacks against medical facilities operated or supported by MSF in Syria and Yemen. This is unprecedented," Meinie Nicolai, MSF president, told reporters in Kabul. "Hospitals are now part of the battlefield."

While all parties claim their attacks to be the most "humanitarian", Kunduz demonstrates that there is no political will – not even from the US – to allow for independent scrutiny of military actions.

Following the air strike, the Pentagon released the findings of an internal inquiry into the 3 October events, which resulted in the dismissal of the attack as “a tragic mistake.” It also maintained that its actions did not amount to a war crime because it was not intentional.

MSF has asked for an independent investigation by the International Humanitarian Fact Finding Commission (IHFFC), an international body created in 1991 to examine allegations of violations of international humanitarian law but which has never been activated. Neither the US nor the Afghan government gave their consent.

MSF’s own internal inquiry found a strong basis for criminal liability, confirmed by Human Rights Watch. According to Theo Boutruche, an independent consultant in human rights and international humanitarian law, intention is not the only valid criteria to determine whether an attack constitutes a war crime.

“The US claimed it was a tragic mistake, but law can make people accountable for tragic mistakes,” he said during a panel discussion organised by MSF in Beirut this week as part of its #Notatarget campaign.

“A party still violates international humanitarian law if it is not taking the necessary precautions,” he said, citing “recklessness” as being another factor indicating a war crime.

The very same findings listed in the Pentagon report may be viewed by an independent commission as evidence of recklessness. The report openly states that the order to fire came when the target was not in the visual line of sight – a fact the US cites in support of its thesis that it did not realise the MSF compound was being hit.

However, the hospital kept being pounded for more than one hour, even after MSF contacted the US military. If the US committed a mistake, the burden should be on it even more so to set an example and allow for an independent inquiry.

For the humanitarian organisations on the front line, providing aid depends not only on negotiations with all parts of the conflict before accessing a war zone, it also strongly relies on accountability.

One year later, no US military personnel have faced criminal charges. The Kunduz hospital still lies in ruin – despite offers by the US to pay for reconstruction. What has also been damaged are the very foundations upon which MSF and other organisations operate in war zones: the trust that the pillars set by international humanitarian law are still governing war.

Since Kunduz, MSF alone has experienced 77 attacks on medical facilities in Syria and Yemen. In Syria especially, hospitals have now fully become part of the battlefield. The campaign group Physicians for Human Rights documented nearly 400 attacks on 269 different hospitals since the war in Syria began in 2011, 90 percent of which have been perpetrated by the Syrian government and its allies.

The unprecedented rate of these attacks has raised questions as to whether the rules of law are changing. While all countries pay lip service to international humanitarian law – which states that medical facilities must not be deliberately attacked – the opposite is becoming the norm.

Another trend, according to Whittall, is the tendency to stretch the limits of principles such as self-defence.

If such logic becomes an unchallenged norm, this will put every organisation’s ability to provide services to everyone regardless of their affiliation at stake. “Either we achieve negotiated agreements from all parties and we continue to work with impartiality, or we have to accept high levels of risk,” said Whittall. “Renouncing our impartiality is not in question as this would mean the end of humanitarianism.”

Organisations providing medical aid are now questioning their ability to work in conflict zones, given that the very basics of international military law – namely that a facility treating the enemy is not a legitimate target – are being turned upside down.

“We need to know whether we are still operating under the same rules of war or if something has changed,” said Whittall. “So far there has only been hypocrisy by members of the UN Security Council who have signed Resolution 2286 [condemning the attacks on medical facilities]. We need these words to be translated into actions.”

In a statement, MSF general director Christopher Stokes said that “every attack on a health facility widens the chasm between the rhetoric from governments about their respect for international humanitarian law and the way they wage wars in reality.”

While no government has ever openly claimed it intentionally bombs hospitals, the unprecedented pace with which this is happening suggests that this is indeed becoming a strategy of war.

“These attacks occur under the umbrella of the ever-expanding ‘war on terror’ – a label used with increasing frequency […] by all military coalitions in Syria,” said Stokes.

If the US wants international humanitarian law to continue to have any efficacy, it should then demonstrate its commitment to the Geneva Conventions by allowing for an independent inquiry.

If we can’t even expect the US to comply with international humanitarian law, there is little or no hope the Russian and Syrian governments ever will.

Photo: A member of Doctors Without Borders (MSF) staff looks on in a charred ward of the damaged hospital in northern Kunduz in November 2015 (AFP) 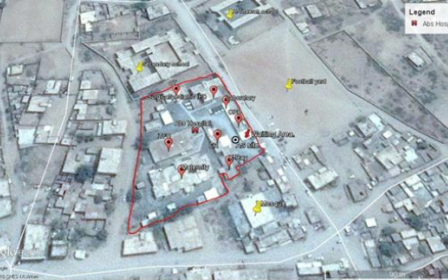 Drone War
From Iraq to Kunduz, US civilian killings are no accident - they're policy
Peter Van Buren