Brussels attacks: Don't forget the many other victims of terrorism 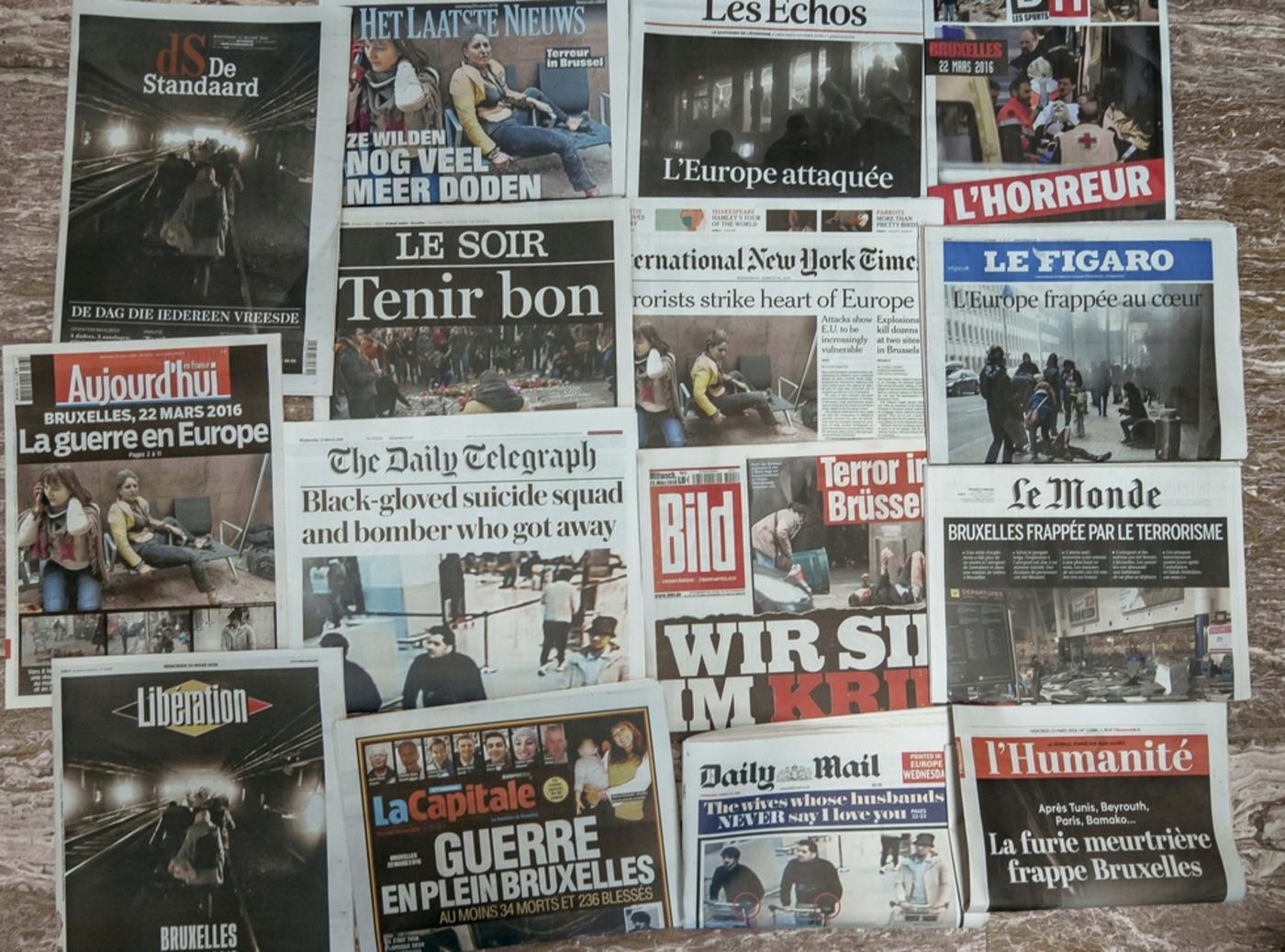 Imagine how deafeningly loud the explosions must have sounded to those nearby, eardrums ringing if not actually bursting from the din. Imagine the bloodcurdling shrieks of terror and agony, perhaps not even in equal measure depending on how far away the victims were from the blast. Imagine body parts strewn across pavements, blood, dust and ash covering the dead and the yet living. Imagine the anguish felt by families after having lost their loved ones to a senseless attack that assaults every last sense and sensibility common to all of mankind.

With a description such as the above, I am certain most people are considering the tragic terrorist attacks in Brussels and, in some way or another, trying to get to grips with it. Pictures of this latest bout of violence from the so-called Islamic State (IS) have now been widely circulated in the media, garnering international condemnation, outrage and anger.

However, what I was attempting to describe was a generic terrorist attack that could have happened absolutely anywhere in the world, and perpetrated by terrorist organisations, state-sponsored terrorists or even by states themselves (just see footage of US gunships murdering Iraqi civilians as one example of that).

The Eiffel Tower was lit up in Belgian hues, Downing Street flew the Belgian flag, and hashtags have been racing one another for retweets and shares all over social media.

It really is touching to see humanity band together in expressions of solidarity and shared disgust at the murder of civilians. Yet it never ceases to amaze me how people fail to draw equivalence between the terrorist attacks in Brussels, and those that have happened in Turkey recently, or even further afield. Ankara was bombed twice by leftwing Kurdish terrorists in the space of a few weeks, and Istanbul has been the victim of IS bombings first in the Sultanahmet area of the old city and most recently on Istiklal Caddesi. In other words, Turkey has suffered from terrorist attacks, all fatal and involving mass murder, on more occasions this year than there have been months.

In solidarity with Turkish victims, I saw hashtags fail to garner attention, I saw people failing to put up opaque Turkish flags over their profile pictures like they did in solidarity with France, and I saw the political left shuffle awkwardly as they tried to juggle their support for secessionist, separatist Kurdish terrorists with the fact that their “moral” crusade in support of such militants now had to account for innocent civilians being slaughtered. It simply became too inelegant to lay this on Turkish President Recep Tayyip Erdogan’s door, yet they did it anyway. The hypocrisy is glaring, and must by now be as red-faced as the red flags the leftists wave so self-righteously in our faces. Or perhaps as red as the blood of Turkish civilians, if that leaves any impression on the hypocrites of the world.

In some cases, though, bare-faced hypocrisy has graduated to brazen opportunism. Every last one of the remaining US presidential candidates came out with something to say about the terrorist attacks in Belgium. Donald Trump, ever the angry beetroot with a toupee, expounded about how he would do a lot more than merely waterboard people. Ted Cruz declared that he would empower law enforcement officers to patrol Muslim neighbourhoods, and bombastically stated that he would name America’s enemy as “radical Islam”. Hillary Clinton gushed about America standing in solidarity with its European allies, yet handily forgot to take time off of the campaign trail to make a statement in solidarity with America’s NATO ally Turkey.

European lives matter. White lives matter. They do. Yet these reactions and the double standards shown to victims of pain and suffering in the Middle East and across the rest of the world are simply too much to bear.

Who really cares or even knows about who the Uighur people are, and the inhuman savage oppression they have suffered as a result of Han Chinese exceptionalism and Communist state terrorism? Who has bothered to educate themselves on the sheer violence of the Indian state inflicted upon the people of Kashmir? Who is brave enough to denounce some Buddhists as terrorists when they advocate and participate in the mass slaughter, rape and pillage of the Rohingya people in Burma? The false linkage between Islam and terrorism is there, yet people cannot wrap their minds around how Buddhist monks meditating in temples in the mountain could possibly premeditate murder and sexual violence. No one afforded the Muslim terrorists in the Tora Bora mountains of Afghanistan the same courtesy.

Of course, one of the biggest affronts to humanity, the original sin that bore the terrorism that has bathed the world in blood and fear and allowed an entire generation of the global population to grow up anxious about when the next big attack will come is the 2003 invasion of Iraq, and the Iraqi Holocaust it formed a part of. Not content with decimating Iraq’s children in the 1990s, not content with the use of uranium munitions to poison Iraq’s soil and unborn babies, and not content with tearing communities and people apart, all actions of state terrorism against a civilian population, the US then installed a virulently sectarian and vicious Shia regime supported by Iran that bloodily hounds the Sunni community in a campaign of terror. In circumstances such as that, do not be surprised that groups like IS exist, and that Iraq incubated them. Do not be surprised, however ugly and wrong, that terrorists strike the countries they have lost all perspective over and blame their populations for their own suffering.

Commentators will again seek to blame religion or refugees. But we already know how these terrorists are distant from the actual teachings of their faith. As for the refugees, the Brussels attack is an example of the kind of terror these refugees had faced and are trying to flee. The most recent attacks are claimed by IS. But back home for them, they have a range of perpetrators of terrorist attacks: IS, al-Qaeda, Syria's Bashar al-Assad, Lebanon's Hezbollah, the ethnic-cleansing Kurdish militias or the sectarian regimes in Iran and Iraq, among others. Take your pick.

Until the world starts acting with equivalence when it comes to human suffering and stops making the blood of non-Western peoples so cheap, no one should be surprised if this disease of terrorism continues to fester in our world, a curse hovering over this generation and the ones to come.

Photo: A picture taken on 23 March, 2016 in Brussels shows the frontpage of several newspapers, one day after some 35 people were killed in bombings at Zaventem Airport and on a metro train (AFP). 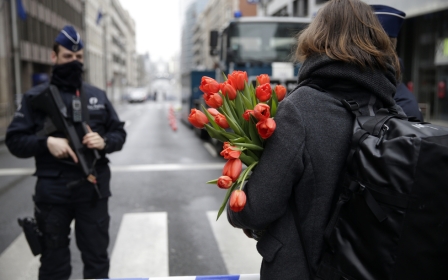 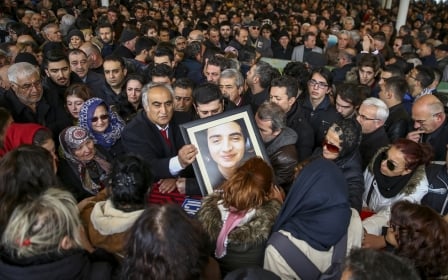