'Gaza Fights for Freedom': An antidote to Israel’s criminal propaganda

Belen Fernandez
A new film by Abby Martin documents a people seeking dignity and basic rights, and ends with an appeal for BDS 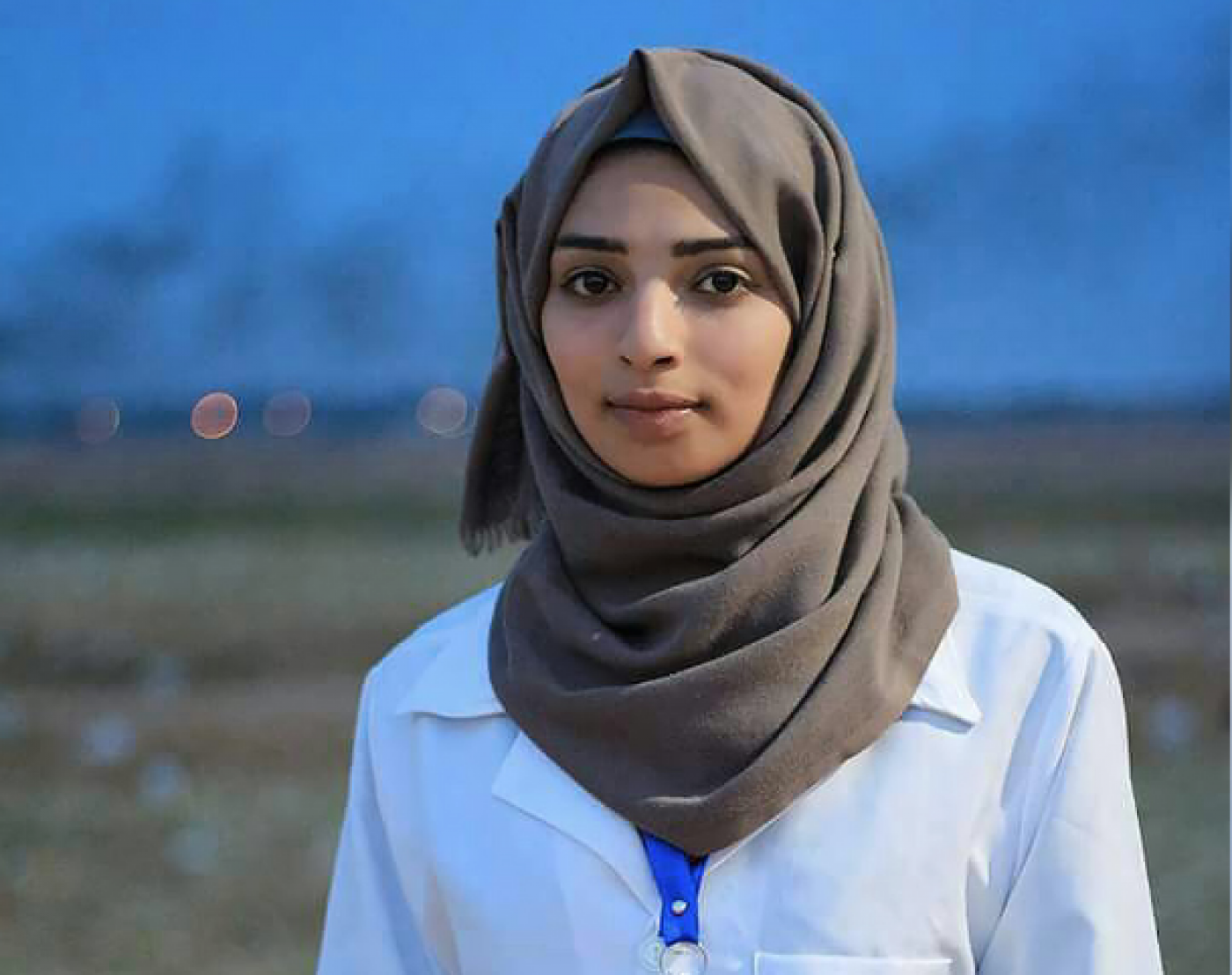 Gaza Fights for Freedom, a new film by Abby Martin, uses film footage of Razan al-Najjar and interviews with her family members and colleagues (Screengrab)

On 1 June 2018, 21-year-old Palestinian paramedic Razan al-Najjar was shot and killed by Israeli forces while tending to casualties during the Great March of Return - the unarmed protests that had begun two months earlier along the Gaza Strip’s border with Israel and that continue to this day.

In predictable fashion, Israeli officials have cast the protesters - from children to elderly women to disabled persons -  as diabolical minions sent by Hamas to lay waste to Israel via “kite and balloon terrorism” and other Scary Stuff.

As with every other manifestation of the Palestinian demand for dignity, Israel has used the Great March of Return as an opportunity to engage in mass slaughter: on a single day in May 2018, some 59 protesters were killed, including children.

As with every other manifestation of the Palestinian demand for dignity, Israel has used the Great March of Return as an opportunity to engage in mass slaughter

In the case of al-Najjar and other medics targeted by Israeli snipers, the whole pesky business of war crimes is magically dispensed with Israel’s signature assault on logic, according to which Palestinian doctors are merely “human shields” for Hamas - and thus, somehow, fair game.

For an antidote to Israel’s criminal propaganda surrounding the Great March of Return, a good place to start is Gaza Fights for Freedom, a new film by the Empire Files’ Abby Martin. From film footage of al-Najjar and interviews with her family members and colleagues, it becomes evident that - forget the “human shield” business - her real crime was in fact being entirely human.

Al-Najjar’s mother recounts how her daughter was most affected by the death of a deaf protester named Abu Sabla: “When he was shot he fell into her arms, so she held him with her hands. His brain went entirely out of his head and into her hands.” 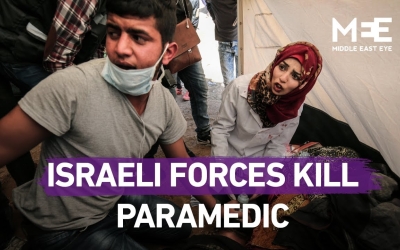 Who was Razan Al-Najjar?
Read More »

Obviously, humanity is not something that can be attributed to any component of the Israeli killing machine - as is particularly clear in footage recorded by Israeli soldiers themselves, who yelp and shriek with delight as they apparently shoot a Palestinian child through the border fence: “Wow what a video! Yes! That son of a bitch.”

While al-Najjar is certainly one of the heroines of Gaza Fights for Freedom, the film covers a ton of other ground. Martin exhaustively categorises Israel’s violations of international law, providing details of Palestinian victims too often written off as “collateral damage” - or worse, “terrorists”.

There’s the 29-year-old man, for example, whose legs were both amputated following an Israeli air strike in 2008 and who, a decade later, is finished off by Israeli snipers as he sits in his wheelchair at the protest.

A report released by an independent commission of the UN Human Rights Council quotes an international journalist covering the Great March of Return, who described the scene on 14 May 2018:

“Every few minutes… you would hear a shot ring out and you would see someone fall. And then another shot and another person fell. It went on for hours… It was surreal and endless. It became almost normal, it was happening so often. A shot, a person falling, people carrying the body away… I have covered wars in Syria, Yemen, Libya. I have never seen anything like this. The slow methodical shooting. It was just shocking.”

The wait is over! After a year of meticulous work, I'm proud to announce #GazaFightsForFreedom is here! Watch the stunning @EmpireFiles collaboration w/ Gaza journalists presenting a damning indictment of Israeli crimes & heroism of Palestinian resistance https://t.co/WGPU8NAVFK

As Martin demonstrates in her film, reality rarely factors into media coverage of Israel-Palestine in the United States, fervent backer of the Israeli military and enabler of Israel’s vast repertoire of crimes.

A compilation of clips from CNN, Fox News and other outlets illustrates just how maniacally the US media trumpets the Israeli line, transmitting an apocalyptic vision of the Great March of Return as a giant swarm of explosives-laden terrorists rushing the Israeli border.

In one CNN clip, former Israeli Education Minister Naftali Bennett is given a platform to voice his opinion that “Hamas is conducting massive self-genocide”, while in another Israeli Prime Minister Benjamin Netanyahu swears that Hamas is interested in accruing as many “telegenically dead” Palestinian civilians as possible.

The “self-genocide” assessment is curious, to say the least, coming from the longtime political partner of Ayelet Shaked, the former Israeli justice minister who literally called for the genocide of Palestinians. As for Netanyahu’s musings, perhaps Israel could nip Hamas’ malevolent plot in the bud by simply refraining from regularly massacring Palestinians.

But where Martin’s film really shines is in providing the context for the Gaza protests and the Palestinian struggle in general - a context that Israel and its US buddy consistently strive to make disappear in favour of fabricated, simplistic narratives of Palestinian violence and Israeli victimhood and "self-defence".

As Martin demonstrates in her film, reality rarely factors into media coverage of Israel-Palestine in the United States, fervent backer of the Israeli military and enabler of Israel’s vast repertoire of crime

She goes back to the beginning, and gives the big picture: from Israel’s violent self-invention on Palestinian land in 1948 - characterised by mass murder, ethnic cleansing, forcible expulsion, and destruction - through to the Israeli military occupation of Gaza, the so-called “withdrawal”, the siege and repeated reduction to rubble of swathes of the diminutive territory, and so on.

In a place commonly referred to as an “open-air prison” - where the majority of the population consists of refugees barred from returning to their homes in what is now Israel - it’s not enormously difficult to see why people might feel compelled to protest.

Martin also showcases revealing soundbites from Israel’s founding fathers that assist with historical contextualisation, like this one from inaugural Prime Minister David Ben-Gurion: “We must expel the Arabs and take their places.”

Or this one from Prime Minister Levi Eshkol, who in the 1960s fantasised about purging the Gaza Strip of Palestinians: “Perhaps if we don’t give them enough water they won’t have a choice, because the orchards will yellow and wither.”

So much for making the desert bloom.

As it turns out, Eshkol’s words were sinisterly prescient. As Martin narrates in the film, “even the UN reports the Gaza Strip will be completely uninhabitable due to lack of water alone by 2020.”

She continues: “97 percent of the fresh water in Gaza is toxic. The vast majority of Gaza’s water desalination plants, which produce fresh water, were destroyed or damaged by Israeli bombs and cannot operate. Fixing them requires importing materials banned by the blockade. Over 25 percent of all diseases in Gaza are directly caused by contaminated water.” 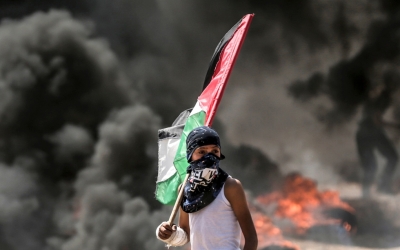 Gaza's Great March of Return: Coming together to end a dark era of injustice
Read More »

But there the Palestinians go self-genociding again.

It bears mentioning that Martin herself was denied entry to Gaza by the Israeli government and thus relied on a team of journalists there to film and conduct interviews - perhaps a preferable arrangement in the end, in terms of having Palestinians tell their own stories.

Some of the scenes are so beautifully shot - even ones of ubiquitous rubble, or of Israel firing gas canisters at the protests - that I actually had to pause the film at one point and contemplate whether I might be guilty of some form of morbid Orientalism and the fethishisation of destruction.

Mercifully, Gaza Fights for Freedom avoids descending into Orientalist romanticisation of the Palestinian struggle. Martin documents a people seeking dignity and basic rights, and ends the film with an appeal for boycott, divestment, and sanctions against Israel - a state that has “so far enjoyed total protection from the US empire, shielded from accountability by the war machine”.

Because as Gaza fights for freedom, it’s not that we need to come to their rescue. We need to realise that Israel and its imperial backers are the enemy of humanity itself. 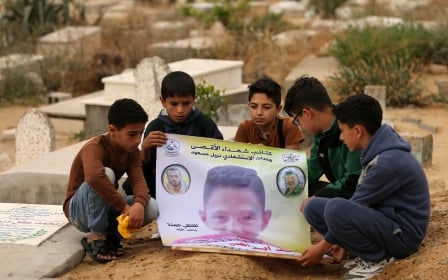 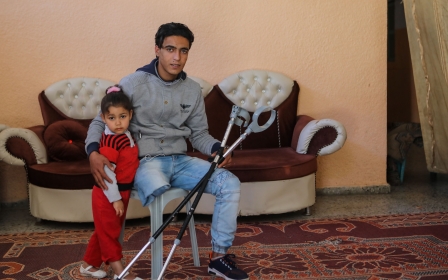