Ben White
Israel's approach to international law can be summed up as 'If you do something for long enough, the world will accept it' 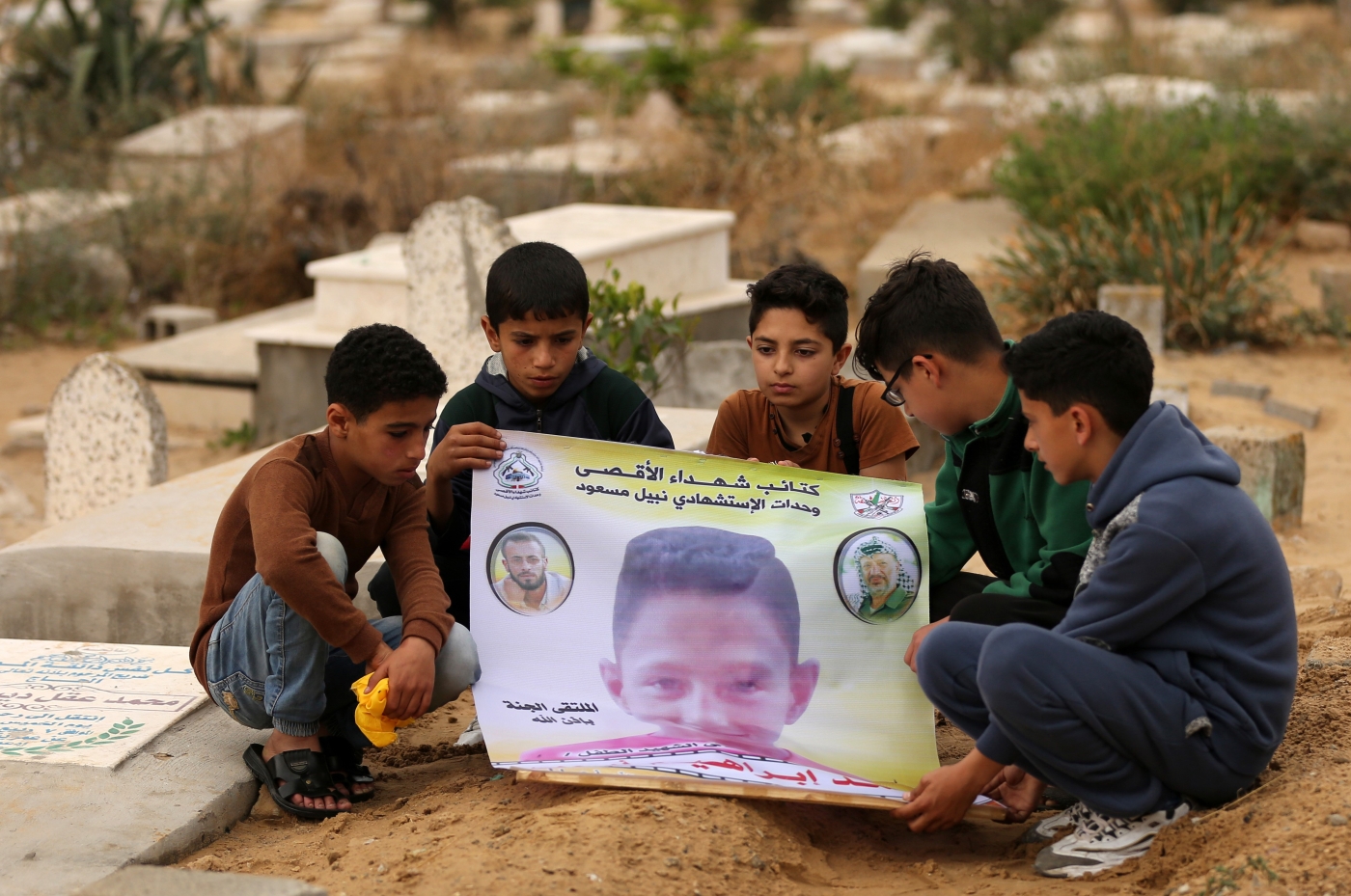 Friends of 15-year-old Palestinian Mohammed Ibrahim Ayoub, who was shot and killed by Israeli army along the Israel-Gaza border, sit by his grave in a cemetery in Beit Lahia on 21 April, 2018 (AFP)

Since removing settlers and redeploying its armed forces to the perimeter fence in 2005, Israel has subjected Palestinians in the Gaza Strip to numerous devastating assaults, a blockade, and routine attacks on the likes of farmers and fishermen.

Many of these policies have been the subject of substantial condemnation – from Palestinians, of course, as well as Israeli and international human rights groups, and even world leaders and politicians – albeit, critically, with little concrete action at the state level.

Israel, however, has sought to thwart even the possibility of meaningful accountability. Its approach has been very simple: in the face of criticism for breaking the law, change the law.

More precisely, Israel has been working hard to develop, and promote, interpretations of international law that provide cover for its policies and tactics in the Gaza Strip.

In January 2009, in the aftermath of an Israeli offensive that led to the UN-commissioned Goldstone report, a lengthy piece was published in Haaretz on the work being done by the international law division within the Military Advocate General’s office. These are the officials responsible for vetting (or perhaps rubber-stamping) the military’s actions and tactics, and providing legal justification for such actions.

One of the interviewees in the article was Daniel Reisner, who had earlier served as the head of the international law division. “If you do something for long enough, the world will accept it,” he said. “The whole of international law is now based on the notion that an act that is forbidden today becomes permissible if executed by enough countries … International law progresses through violations.”

It is the Gaza Strip that Israel has used as a laboratory for such “progressive” violations. One example is the status of Gaza itself. Since 2005, Israel’s position has been that Gaza is neither occupied nor sovereign, but rather constitutes a “hostile entity”.

In her recent book Justice for Some, scholar Noura Erakat spells out the implications of such a designation, which renders Gaza “neither a state wherein Palestinians have the right to police and protect themselves nor an occupied territory whose civilian population Israel had a duty to protect”.

“In effect, Israel usurped the right of Palestinians to defend themselves because they did not belong to an embryonic sovereign, relinquished its obligations as an occupying power, and expanded its right to unleash military force, thus rendering Palestinians in the Gaza Strip triply vulnerable,” Erakat noted.

The claim that the Gaza Strip is no longer occupied is, of course, flawed, not least because Israel has retained effective control over the territory. Its armed forces enter at will on land and at sea, and Israel retains control over Gaza’s airspace, electromagnetic spectrum, most entry-exit points and the population registry – in addition to the ongoing blockade.

The Gaza Strip is merely one part of the occupied Palestinian territory, along with the West Bank (including East Jerusalem), that forms a single territorial entity. Gaza’s occupied status since 2005 has thus been affirmed by numerous relevant bodies, including the UN Security Council.

Israeli officials’ legal “creativity” is most frequently demonstrated by some of the tactics adopted by the Israeli military during assaults.

During the 2014 Israeli offensive on Gaza, 142 Palestinian families had three or more members killed in the same incident. Such shocking figures were partly the result of Israel deliberately targeting dozens of Palestinian family homes, in addition to those struck as a result of indiscriminate bombardment.

Key here was Israel’s determination that any (alleged) member of an armed Palestinian faction was a legitimate target, even when they were not participating in fighting – ie, at home with their families – and that family members became legitimate “collateral damage” on account of the presence of a suspect in the home (even, by the way, if that individual wasn’t actually at home at the time). As one Israeli official put it: “You call it a home, we call it a command centre.”

Despite the fact that under international law, Israel needed to show that any targeted structure was performing a military function, as rights group B’Tselem described, “no official claimed that there was any connection between a house that was targeted and any specific military activity there”. 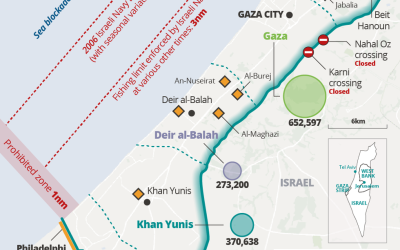 Therefore, the Israeli military’s explanations for the destruction of homes appeared “to be no more than a cover-up for the actual reason for the destruction, namely the identity of the occupants” – that is to say, these were “punitive house demolitions … carried out from the air, with occupants still inside”.

Another tactic used by the Israeli military is the issuing of “warnings” to civilians, whether in the form of phone calls or text messages to specific properties, or leaflets dropped to entire neighbourhoods. Israel presents this tactic as evidence that it goes out of its way to avoid civilian casualties, even though such warnings are, in fact, an obligation rather than “acts of charity”.

Crucially, of course, such warnings do not remove protected status from civilian residents. However, there is good evidence to suggest that this is not a view shared within the Israeli military.

In the aforementioned 2009 Haaretz article, one official said: “The people who go into a house despite a warning do not have to be taken into account in terms of injury to civilians, because they are voluntary human shields. From the legal point of view, I do not have to show consideration for them.”

So, in a disturbing twist, while warnings are presented as minimising civilian casualties, in reality, they serve to facilitate the attacks and can even contribute to the death toll.

These are just a few examples, as Israel seeks to normalise the illegal, with two goals in mind. Note that it was after the publication of the Goldstone report that Prime Minister Benjamin Netanyahu “instructed government officials to draft proposals for changing international laws of war”.

Israel’s “innovations” in international law are thus intended to facilitate the increasingly brutal suppression of Palestinians on the ground, while internationally, such interpretations are promoted to either muddy the waters in legal fora or, ultimately, to gain support from other state parties.

It is important to remember that the problem of accountability predates more recent developments. Israel has long violated international law, and justified certain policies in legal terms – from the confiscation of land in occupied territory to the establishment of settlements.

This helps us understand that the key problem is a political one – and that the answer to how to challenge impunity and resist Israel’s “innovative” interpretations of the law is the same: political pressure.

Failure on this front will be felt most keenly by those most vulnerable – the Palestinians.