France should take a bold step for Palestine 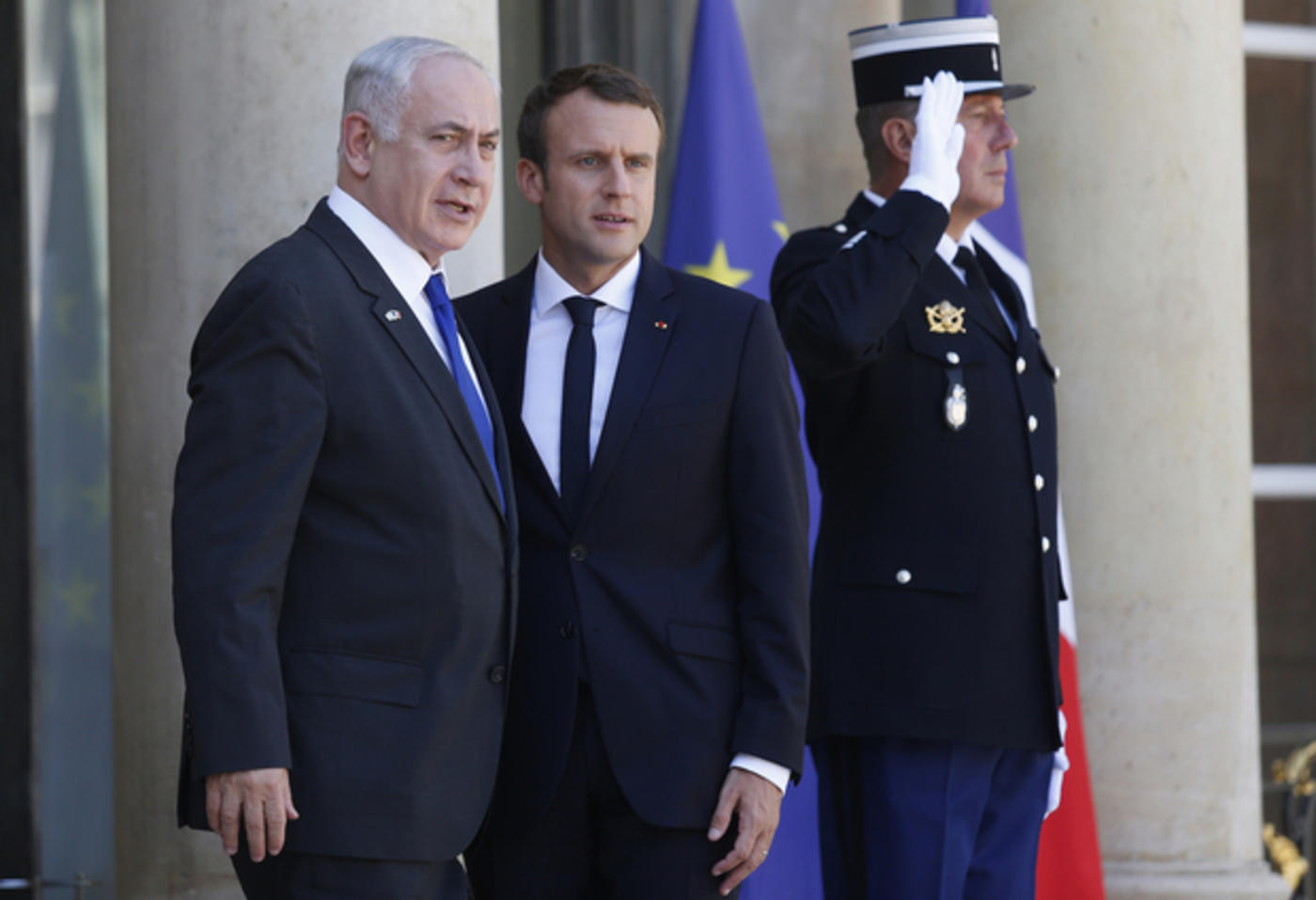 You can see how one would end up believing in Benjamin Netanyahu's "Francophilia". The Israeli prime minister is on his third visit to France since Emmanuel Macron became president.

Following his July 2017 visit to mark the 75th anniversary of the Vel d'Hiv deportation of Jews, Netanyahu has arrived in France for the second time in six months, while the French president has not yet visited Israel.

The agenda of this visit is well known, as the French embassy in Israel published it on its Twitter account. Discussions are expected to concern the Iranian nuclear agreement, the situation in Syria, Lebanon's Hezbollah and the Palestinian question.

Raised by presidential adviser Philippe Etienne during preliminary consultations with his counterparts in Israel, these matters are logically at the centre of Israeli concerns. Unfortunately, the Palestinian question occupies the last position in the French embassy's tweet.

This does not mean that the subject will necessarily be left out of Franco-Israeli discussions; its importance has been illustrated in recent months by at least two major events, including the Trump administration's recognition of Jerusalem as Israel's capital and the Israeli army's violence against Palestinians in Gaza, with dozens killed and thousands injured. France's support for a UN resolution calling for international protection for Palestinian civilians in Gaza should also be noted.

Macron inherited the presidency amid a rather particular, and difficult, context on the Israeli-Palestinian issue

Such facts should not leave the French president silent on the issue, especially at a time when the question of Palestinian presidential succession is being raised.

But while there is no reason to be fooled - Iran will be the major subject of these discussions - it is nevertheless useful to recall the reasons why Paris remains wrongly timid on the Palestinian question.

Macron inherited the presidency amid a rather particular, and difficult, context on the Israeli-Palestinian issue. In less than a year of his presidency, he has seen the US recognise Jerusalem as Israel's capital and witnessed the brutal crackdown by Israeli forces in Gaza.

In addition, there was the embarrassment, albeit contained, of Israel's indictment of an employee of the French consulate-general in Jerusalem for his alleged involvement in arms trafficking between Gaza and the West Bank.

While one would have expected the Israelis to take advantage of this case to push the French to vote in their favour on the Jerusalem issue, Israeli intelligence services pointed to the fact that this employee acted on his own initiative. This has cleared France of all responsibility and kept it safe from recurrent Israeli criticism of its supposed "pro-Palestinian bias". The question remains as to whether the Israelis have shown flexibility in exchange for disengagement from Paris on the Iranian dossier.

However, it is not believed that the consular employee's case, had it escalated, would have had a profound impact on the French diplomatic approach to the Palestinian question. The French president's stance on Jerusalem is clear and in line with the principles constantly defended under the Fifth Republic.

In December 2017, at a joint press conference with Netanyahu, Macron expressed his disagreement with the Israeli prime minister and his disapproval towards the US decision on Jerusalem, calling on Israelis to "make a gesture towards the Palestinians".

A few days later, Macron received Palestinian President Mahmoud Abbas in Paris. The French president reiterated his commitment to the two-state solution, specifying that France would not unilaterally recognise a Palestinian state, as such a decision could not be "effective" in his view.

The French president, a relative newcomer to the world of politics, benefits from both the Israeli and Palestinian points of view from a perspective of "political virginity" that hinders - for the time being - any possible accusations of bias. But he also sees himself, as the leader of a permanent member of the UN Security Council, in a situation that requires him to take into account the potentially explosive nature of the Israeli-Palestinian question.

France's attitude towards this question, and its commitment to the two-state solution, is above all a position of principle. Paris has always stressed the importance of respecting international law, and in particular the terms of UN Security Council Resolution 242, the cornerstone for a resolution to the Israeli-Palestinian conflict. France's regular calls for Israel to freeze settlement construction in the Palestinian territories are consistent with this.

But any French president must also face the realities of the Jewish and Arab communities living in France. Passions were unleashed in France during the Second Intifada of 2000 in particular, provoking tensions between "pro-Israelis" and "pro-Palestinians" - and thus, symbolically, between Jews and Arabs.

Although France has no official figures on the actual number of Jews and citizens of Arab origin living in its territory, it is generally assumed that the members of these two communities would make a combined total of some six to seven million people, or about 10 percent of the population - and that of this total, Arabs (to which Muslims in general are added, thus increasing the margin of error) would constitute some six million people and Jews some 600,000.

This ratio should not mislead us, however, as not every Jew is necessarily pro-Israel, nor will every Arab necessarily defend the Palestinian cause. That said, the law of numbers, combined with the sensitivity of the Israeli-Palestinian question, makes the repercussions obvious.

French diplomacy, whether it tilts in one direction or the other, will therefore be criticised as either biased or too weak

The CRIF, the self-proclaimed defender of French citizens of the Jewish faith - mistakenly portrayed as unconditional supporters of the policies of successive Israeli governments - is thus very keen to establish the idea of an existential threat facing Israel and France's Jewish population due to the alleged inborn anti-Semitism of Arabs.

On the Arab and Muslim sides, representative structures are legion, but none represents all of these communities. This leaves the field open to the free expression of views and the organisation of events that give the impression of an aggravated climate.

As a result, France's diplomatic options are potentially reduced. French diplomacy, whether it tilts in one direction or the other, will therefore be criticised as either biased or too weak. It must also be acknowledged that France does not always deploy the tools likely to move it from rhetoric to action.

If France is generally solicited by Israelis and Palestinians, it is mainly because of its status as a permanent member of the UN Security Council. Moreover, its historical relations with Israel and the Arab countries have led it to build lasting ties with each. But if Macron today calls for a stronger role for Europeans, one cannot say that his current posture helps Paris or Brussels to be more effective in relation to the Israeli-Palestinian conflict.

The Paris-Washington axis has been dominant, and behind that friendship lies another reality: that neither France, nor any other country - not even China or Russia - is in a position to contradict Washington head-on with regards to the Israeli-Palestinian conflict.

The illegal US recognition of Jerusalem as the capital of Israel will not necessarily allow the "force of law" to be posed as an alternative, for there is a lack of defenders of this option. Yet there is a truth that Macron spoke to Netanyahu: Israel did not gain security with the US embassy move.

We can therefore only encourage Paris, despite the difficulties of the task, to take advantage of its position to push the necessary way forward, in the fashion of the 1991 Madrid Conference.

Such an effort would require more work on the part of many Arab countries concerned with the Israeli-Palestinian conflict. It turns out, however, that they do not take a dim view of the Bibi-Macron timetable, as announced on Twitter: the Iranian nuclear agreement, Iran, Syria, Lebanon... and the Palestinian question, perhaps, one day. Can Emmanuel Macron, then, be "more royalist than the king"?

- Barah Mikaïl is Director of Stractegia, a Madrid-based centre dedicated to research on the North Africa - Middle East region and the political, economic and social outlooks in Spain.

This article originally appeared in French. 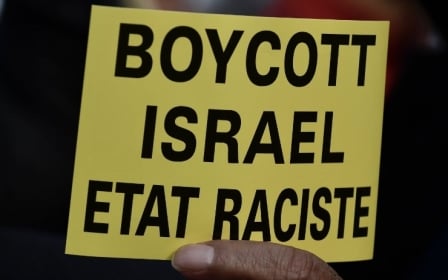