Gaza massacre: This alliance of Israeli and American extremism will spark cycle of revenge 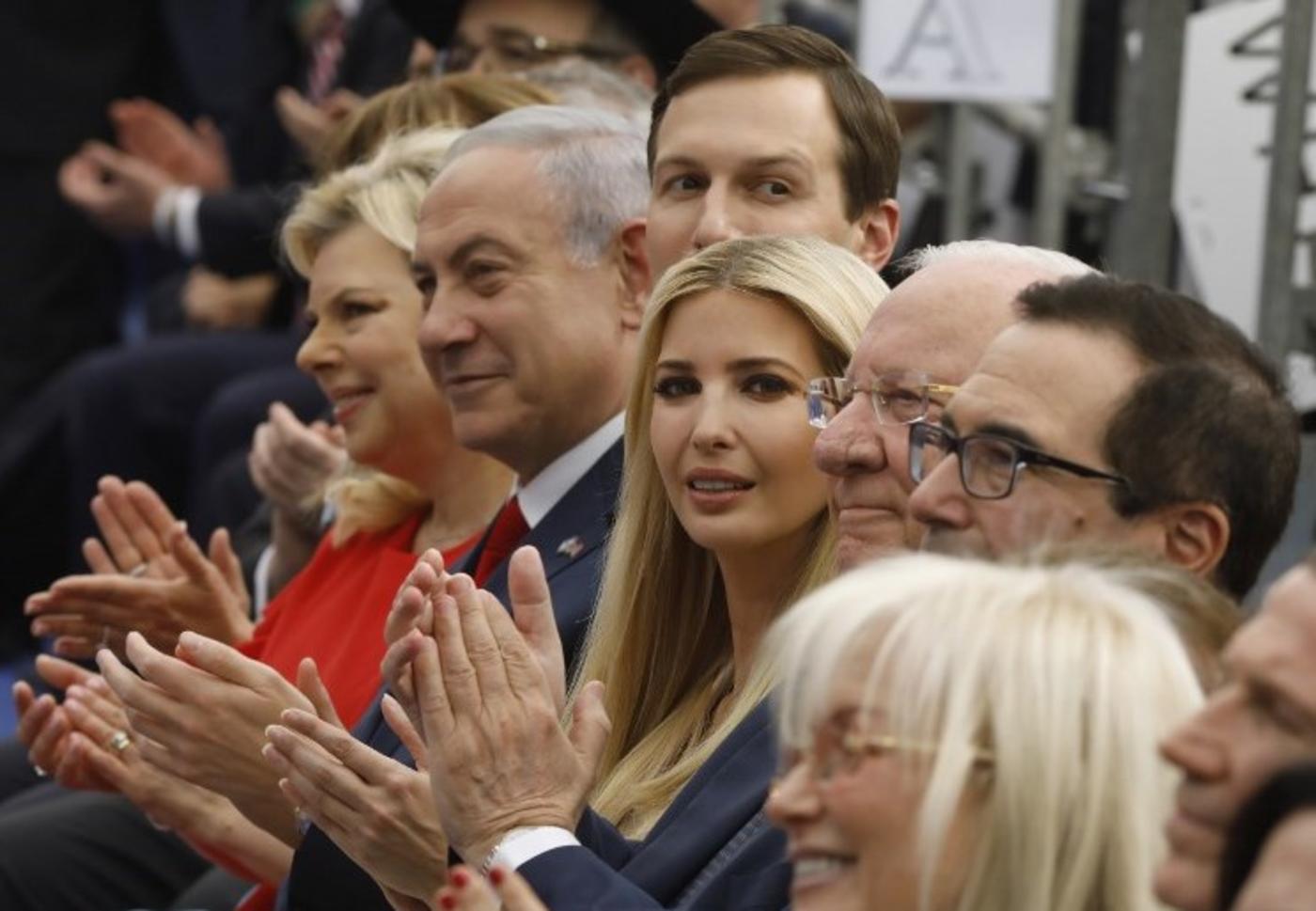 Words are almost impossible to describe the surrealism of Monday's developments in Jerusalem and Gaza. On the one hand, US President Donald Trump, speaking by video from the White House, his daughter Ivanka and son-in-law Jared Kushner led the American dedication of the "new" American embassy in the holy city.

They were accompanied by two Christian evangelical pastors, Robert Jeffress and John Hagee, who offered prayers at the dedication ceremony. Both have espoused explicitly anti-Semitic and Islamophobic views in the past.

CNN flashed across its TV screen images of the Trump contingent laughing and smiling along with Israeli Prime Minister Benjamin Netanyahu. They juxtaposed this with images of the mayhem in Gaza, where a reinforced Israeli army contingent was simultaneously mowing down Palestinian protesters with abandon.

By the end of the day, 60 lay dead, along with nearly 1,500 wounded by live fire from snipers. Among the dead were old men, and even an eight-month-old baby, Leila al-Ghandour, who was overcome with tear gas. The juxtaposition of those two images of the TV screen conjured not just cognitive dissonance, but something much more horrible, apocalyptic, and almost inexpressibly grim.

Western journalists are dripping with condescension toward Palestine. They have a conscious or unconscious impulse to present Israel as just and the Palestinians as lacking in dignity and humanity. It is a shameful journalistic lapse

The coverage of the Gaza massacre in US media has ranged from barely adequate to appalling. Many headlines speak of Palestinians who "died", as they suddenly spontaneously combusted or suffered a terminal attack of a virulent Gaza Flu. On social media, Israeli apologists blamed Hamas for the deaths of more than 100 Palestinian protesters overall, as if the bullets which killed them were fired by Hamas, rather than the Israeli army.

Not to be outdone, the New York Times' Israel bureau chief, Peter Baker, tweeted this account of a Palestinian man who braved Israeli forces fire to sabotage the fence separating the protesters from Israeli forces:

They insist they do not have a death wish. But on the deadliest day in Gaza since the 2014 war with Israel, the risks of suicidal charges by Palestinians at the border fence hardly seemed commensurate with the rewards. @declanwalsh https://t.co/aKPcCMjiRs

It's curious that thousands of brave Palestinians seeking to regain their stolen lands are called "suicidal" and described as having a "death wish". No doubt, Baker would use different terms to describe the 900 Judeans who, according to nationalist myth, committed suicide rather than be conquered by the Romans at the final stage of the siege of Masada.

How might Baker describe those courageous Jews who determined they would rather die fighting the Nazis than succumb in the suffocating liquidation of the Warsaw Ghetto? Would he say these ghetto fighters were suicidal or had a death wish? Or would he describe them as national heroes who sacrificed their lives for a noble cause?

In other words, western journalists are dripping with condescension toward Palestine. They have a conscious or unconscious impulse to present Israel as just and the Palestinians as lacking in dignity and humanity. It is a shameful journalistic lapse.

Meanwhile, Tuesday 15 May is Nakba Day, the commemoration of the expulsion of three-quarters of a million Palestinians from their land in 1948. There is no telling what further mayhem this day will bring. Israel will certainly not call off the dogs. Snipers will fire with renewed abandon on Palestinians in Gaza who once again challenge Israeli occupation there. More will die, while few in the international community offer any meaningful condemnation.

A CNN reporter tweeted that when she asked Secretary of State Mike Pompeo if he had any statement on the killings in Gaza, he turned his back on her and walked away.

Israel has forwarded an ominous threat via Egyptian intelligence to Hamas' leadership warning that if they continue the protests at the fence, Israel will commence targeted assassinations, presumably of its leaders, Ismail Haniya, Yahya Sinwar and others.

This development reinforces the false notion spread by Israeli officials that Hamas is the author of these protests. Hamas did not devise the Great March of Return. This was the work of an alliance of civil society groups. Hamas does not direct the actions undertaken by protesters.

The bellicosity of such a threat sounds like the work of Avigdor Lieberman, who's levelled similar threats against any number of Arab leaders in the past. Nevertheless, this must be taken seriously because Israel has a long record of assassinations of Palestinian leaders from all the major factions, including Hamas.

What we've seen, at least in the Jerusalem half of this tragedy, is the triumph of a malign form of religious extremism

Such a move in this incendiary context would likely cause a major explosion and war between Israel and Gaza, the first one since 2014. Then 2,200 Palestinians were killed by the Israeli army, including 300 children and 700 women.

The main difference between 2014 and today is that the region is now a smouldering powder keg with proxy battles in Syria, and an escalating shadow war between Israel and Iranian forces there. How would a new war in Gaza fit into this framework? Could it lead to a wider, regional conflagration? It's anyone's guess.

A day before the Jerusalem embassy dedication, Ivanka and Jared sought the blessing of Israel's chief Sephardic rabbi, Yitzhak Yosef, who only weeks before had told his followers that African-American children walking the streets of New York were "monkeys".

Jeffress, one of America's best-known evangelical ministers, delivered the opening prayer at the embassy celebration. He was invited because, of course, he's a mainstay of Fox News. There he rails against every major religion except his own: Jeffress has referred to both Islam and Mormonism as "a heresy from the pit of hell". He believes Islam, Mormonism, Hinduism and Buddhism are all cults, and that Catholicism represents the "genius of Satan".

Jews, he believes, are going to hell. "You can't be saved by being a Jew," he said once. And in a statement sure to please the Israelis, he has compared the treatment of Christians in the United States to the Nazis' treatment of Jews right before they launched the Final Solution programme to exterminate them.

What's astonishing is that Israel is welcoming to its midst a Christian anti-Semite - and doing so with open arms. If anyone questions the final morphing of Zionism into a movement that offers nothing but hate for Judaism, certainly toward Diaspora Judaism, this should affirm the claim.

Add to the catalogue of bizarre religious phenomenon, US ambassador to Israel, David Friedman, whose family foundation has donated significant funds to an Israeli religious group, Kommemiyut, is seeking to overthrow the secular Israeli state and replace it with a theocratic monarchy, ruled over by a descendant of King David.

What we’ve seen, at least in the Jerusalem half of this tragedy, is the triumph of a malign form of religious extremism. It is an alliance of Christian evangelical fervour with Israeli settler hatred. Together they offer almost as potent an explosive force as a match and a case of dynamite.

Over the weekend, Israel celebrated Jerusalem Day, a holiday in which thousands of settlers march like Brown Shirts through Palestinian neighbourhoods in the city, bellowing provocative racist chants and waving thousands of Israeli flags.

The march they undertake through these largely Muslim neighbourhoods is the Israeli equivalent of the alt-Right assault on Charlottesville. These settlers are Israel's version of white supremacists. But unlike the latter, Israel's settlers actually run the country. Its politicians serve their wishes and are at their beck and call. There are secular Jews, but their interests are swamped under a rising tide of religious fanaticism.

Among the lyrics these pagans chant: "Avenge but one of my two eyes upon Palestine, may their name be wiped out." I also feature a photo of a t-shirt sold to these marchers. It features a few brave settler lads toppling the Dome of the Rock, with a caption: "Sometimes, you've got to take your kippah ['cap' or 'dome'] off."

Such provocation doesn't cow the Palestinians. Just the reverse, it spurs the next knife attacker. The next time you hear of an Israeli soldier or settler killed or wounded, remember these videos, images and slogans. They are precisely why the cycle of violence never ends.

Adding the final insult to injury is the dedication of the "new" US embassy in Jerusalem. It isn't new and isn't really even an embassy at present. It's the current US consulate and actually not even built within the Green Line. It's situated on disputed territory, former Palestinian farmland and what was later considered No Man's Land after 1948.

It was conquered in 1967 when Israel ousted the Jordanians and took control of the city. But Israel refuses to recognise a formal border between Israel and Palestine. So, ironically, we've built our new embassy on territory that is at best disputed, and at "worst" Palestinian land. The New York Times even suggested that ambassador Friedman might be called a "diplomat settler".

Dancing on the dead: US embassy opens a new era of bloodshed
David Hearst
Read More »

But that shouldn't surprise us, because almost the entirety of the Israeli settler movement is based on such theft and usurpation of Palestine. One can even argue that Israel's founding in 1948, based as it was on the expulsion of nearly one million Palestinians and the destruction of 400 of their villages, is the original usurpation. So why should the US presence there be any different?

Israel has lit a powder keg of provocation and deliberately so. No Israeli leader has any appreciation of one of Newton's laws: "For every action there is an equal and opposite reaction." Palestinians certainly will respond.

They will be outraged. What do you think will happen now? That Palestinians will break out their picnic baskets and invite their Israeli friends to join them? No, of course, there will be mayhem. There will be revenge.