The good, bad and uncertain about recognising ‘Palestine’ 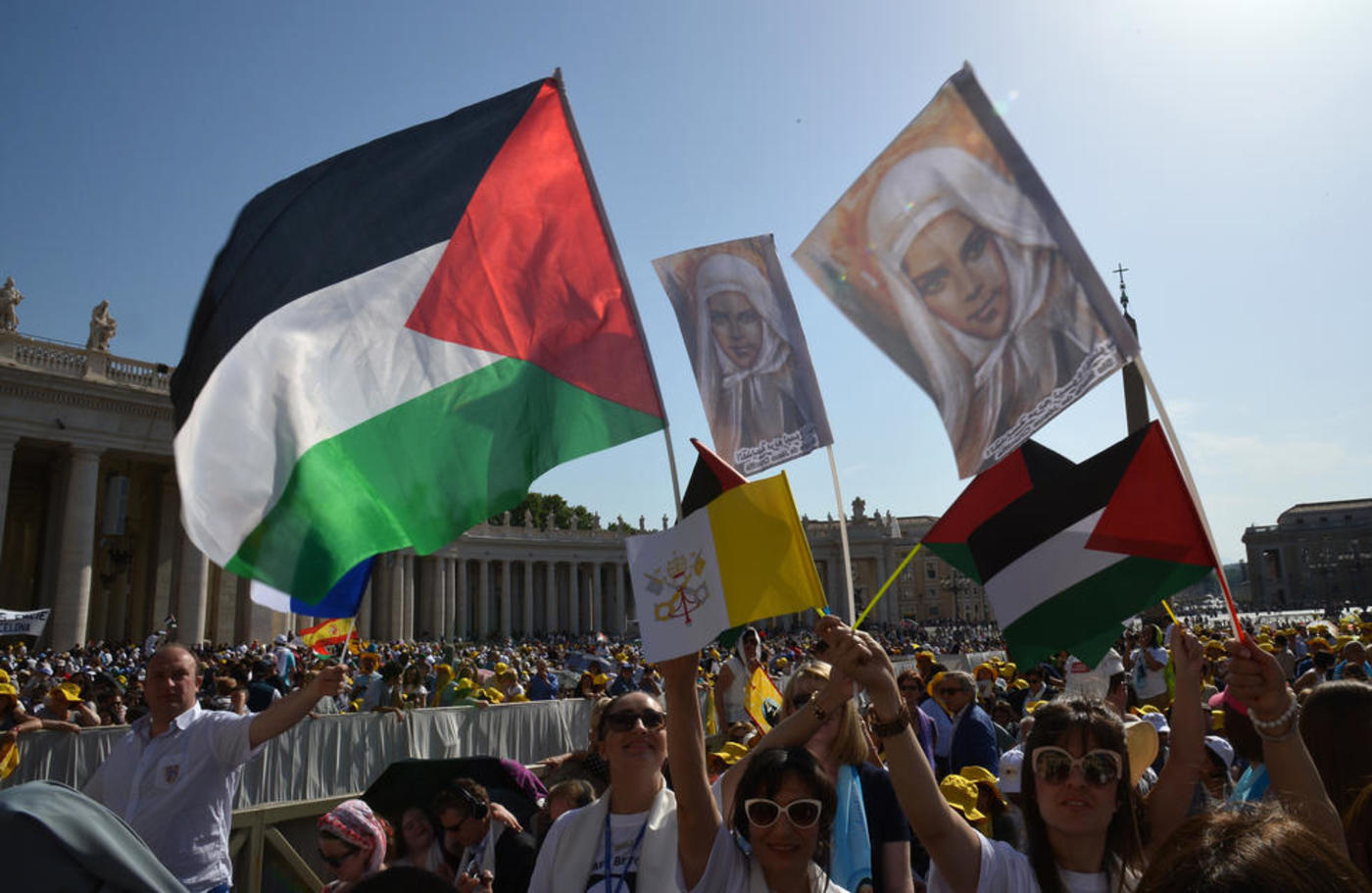 No matter what Palestinian Authority President Mahmoud Abbas does, his popularity is declining. In some ways, Abbas’ threshold for popularity was really never impressive to begin with, a trend that is unlikely to change in the near future.

But now that a power struggle in his Fatah party is looming, and his two-decade investment in the “peace process” scheme has proven to be fruitless, Abbas is doing what he should have done a long time ago: internationalise the Palestinian struggle, and break away from the confines of American influence and double-standard “diplomacy”.

Considering Abbas’ grim legacy among Palestinians, his leading role in engineering the peace process, crackdown on dissent, failure to achieve unity among his people, undemocratic rule, and much more, it is doubtful that his internationalisation efforts are done with the greater good in mind. But should that matter if the outcome is greater recognition of a Palestinian state?

On 13 May, the Vatican officially recognised the state of Palestine. In reality, the Vatican had already welcomed the United Nations General Assembly vote in 2012 to recognise a Palestinian state. Moreover, it had treated Palestine as a state ever since.

But what makes 13 May particularly important is that the subtle recognition was put into practise in the form of a treaty, which is in itself not too important. True, the updated recognition is still symbolic in a sense, but also significant, for it is further validates the Palestinian leadership’s new approach aimed at breaking away from the US-sponsored peace process into a more internationalised approach to the conflict.

The Vatican can be seen as a moral authority to many of the 1.2 billion people that consider themselves Roman Catholics. Its recognition of Palestine is consistent with the political attitude of countries that are considered the strongest supporters of Palestinian rights around the world, the majority of whom are located in Latin America and Africa.

There is more than one way to read this latest development within the context of the larger Palestinian strategic shift to break away from the disproportionate dependence on American political hegemony over the Palestinian discourse. But it is not all positive, and the road for the “state of Palestine,” which is yet to exist outside the realm of symbolism, is paved with dangers.

1. Recognitions allow Palestinians to break away from United States hegemony over the political discourse of the “Palestinian-Israeli conflict”.

For nearly twenty-five years, the Palestinian leadership - first the PLO and then the PA - fell under the spell of American influence starting at the US-led multilateral negotiations between Israel and Arab countries in Madrid in 1991. The singing of the Oslo Agreement in 1993 and the establishment of the PA the following year gave the US an overriding political influence over Palestinian political discourse. While the PA accumulated considerable wealth and a degree of political validation as a result of that exchange, Palestinians as a whole lost a great deal.

2. International recognitions downgrade the “peace process,” which has been futile at best, but also destructive as far as Palestinian national aspirations are concerned.

Since the US-sponsored “peace process” was launched in 1993, Palestinians gained little and lost so much more. That loss can be highlighted mostly in the following: massive expansion in Israel’s illegal Jewish settlements in the occupied territories, doubling the number of the illegal settlers as well; the failure of the so-called peace process to deliver any of its declared goals, largely Palestinian political sovereignty and an independent state; and the fragmentation of the Palestinian national cause among competing factions.

The last nail in the “peace process” coffin was put in place when US Secretary of State, John Kerry, failed to meet his deadline of April 2014 that aimed at achieving a “framework agreement” between the PA and the rightwing government of Benjamin Netanyahu.

The collapse in the process was largely an outcome of a deep-seated ailment where the talks, no matter how “positive” and “encouraging” they were, were never truly designed to give Palestinians what they aspired to achieve: a state of their own. Netanyahu and his government (the recent one being arguably the “most hawkish” in Israel’s history) made their intentions repeatedly clear.

Finding alternatives to the futile “peace process,” through taking the conflict back to international institutions and individual governments is surely a much wiser strategy than making the same mistake time and again.

3. Instead of being coerced to engage in frivolous talks in exchange for funds, recognitions of Palestine allow Palestinians to regain the initiative.

In 2012, Abbas reached out to the UN General Assembly seeking recognition of Palestine. Once he achieved the new status, he continued to push for his internationalisation of the Palestinian cause project, although at times, hesitantly.

What is more important than Abbas’ manoeuvres is that with the exception of the United States, Israel, Canada and a few tiny islands, many countries including US western allies seemed receptive to the Palestinian initiative. Some went as far as confirming that commitment through parliamentary votes in favour of a Palestinian state. The Vatican’s decision to sign a treaty with the “state of Palestine” is but a step further in the same direction. But all in all, the movement towards recognising the state of Palestine has grown in momentum to the extent that its sidestepping the US entirely, and discounting its role as the self-imposed “honest broker” in a peace process that was born dead.

Thus, it is a good day when the US’s disparate political and military influence retreats in favour of a more pluralistic and democratic world. But it is not all good news for the Palestinians because these recognitions come at a cost.

1. These recognitions are conditioned on the so-called two state solution idea, itself an impracticable starting point for resolving the conflict.

A two-state solution that can introduce the most basic threshold for justice is not possible considering the impossibility of the geography of the Israeli occupation, the huge buildup of illegal settlements dotting the West Bank and Jerusalem, the right of return for Palestinian refugees to their homes, and issues pertaining to water rights, etc. That “solution” is a relic of a past historical period when Henry Kissinger launched his shuttle diplomacy in the 1970’s. It has no place in today’s world when the lives of Palestinians and Israelis are overlapping in too many ways for a clean break to be realised.

2. Recognitions are validating the very Palestinian president who is serving with an expired mandate that is presiding over an unelected government.

In fact, it was Abbas also known as Abu Mazen, who mostly cooked up the whole Oslo deal, starting secretly in Norway, while by-passing any attempt at Palestinian consensus regarding the inherently skewed process. Since then, he more or less stood at the helm, benefiting from the political disaster that has engineered. Should Abbas, now 80, be given yet another chance to shift the Palestinian strategy to a whole different direction? Should these efforts be validated? Or isn’t it time for a rethink involving a younger generation of Palestinian leaders capable of steering the Palestinian national project into a whole new realm of politics?

Recognising a country that is not fully formed and is under military occupation will hardly change the reality on the ground in any shape or form. The Israeli military occupation, the expanding settlements, and suffocating checkpoints remain to be the daily reality that Palestinians must contend with. Even if Abbas’ strategy succeeds, there is no evidence that in the end it will carry any actual weight, in terms of deterring Israel or lessening the suffering of the Palestinians.

One could argue that the recognition of Palestine is much bigger than Abbas as an individual or a legacy. These recognitions demonstrate that there has been a seismic shift in international consensus regarding Palestine, where many countries in the southern and northern hemispheres seem to ultimately agree that it is time to liberate the fate of Palestine from American hegemony. In the long run, and considering the growing rebalancing of global powers, for Palestinians, this is a good start.

However, the question remains: Will there be a capable and savvy Palestinian leadership that knows how to take advantage of this global shift and utilise it to the fullest extent for the benefit of the Palestinian people?

Photo: Pilgrims wave Palestinian flags before a holy mass in St Peter's square for canonization of two Palestinian nuns that lived in Ottoman Palestine, on 17 May (AFP)