Matt Unicomb
Rather than truthfully reporting on Israel's actions, German journalists and politicians obsess over antisemitism by attacking immigrant communities at home 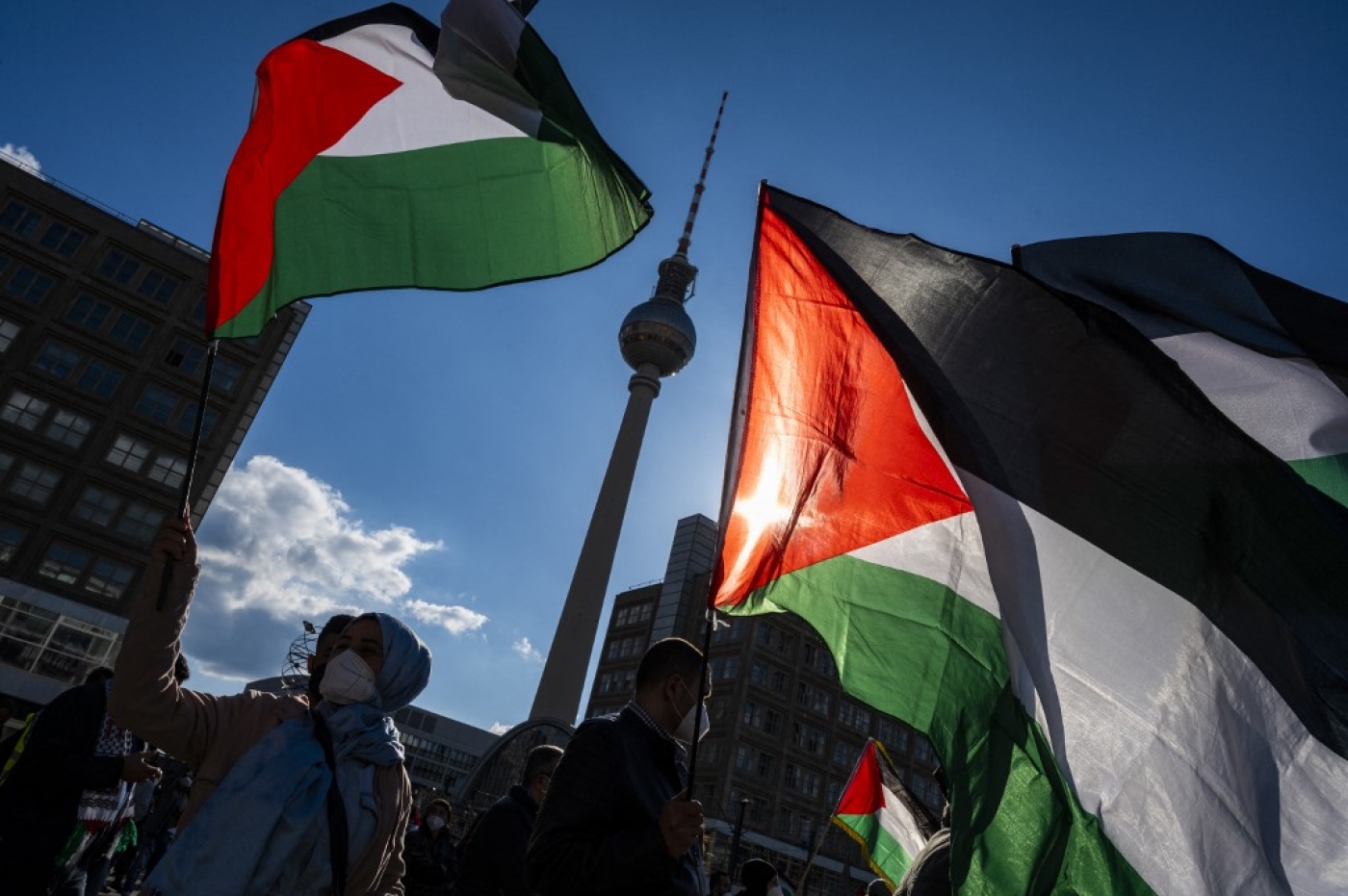 Demonstrators display Palestinian flags during a pro-Palestinian protest in Berlin, with the landmark TV Tower in the background, on 19 May 2021 (AFP)

On 15 May, around 3,000 students, activists and local Arabs gathered in Berlin’s Neukolln neighbourhood for a rally in support of Palestine liberation. The atmosphere was overwhelmingly peaceful for most of the afternoon, as couples wearing keffiyehs manoeuvred small children between teenagers wrapped in Palestinian flags.

Demonstrators waved signs in English, German and Arabic as they made their way down Sonnenallee, the beating heart of Berlin’s Arab quarter, where there’s a family-owned cafe, shisha bar or falafel joint on almost every block.

By the time police violently dispersed the rally, citing a lack of social distancing, newsrooms throughout Germany had already decided on the narrative they would push. It was “antisemitic agitation”, declared RBB, Berlin’s state-funded broadcaster. An article on the website of Tagesschau, Germany’s most-watched evening news programme, referred to "antisemitic protests”, while the right-wing Bild announced: “Police injured at hate demo.”

In Germany, harnessing racism in the name of fighting antisemitism is fair game. Any pro-Palestine position, especially from immigrants or leftwing activists, is dangerous

It was impossible to find interviews with demonstrators during, or in the days after, this protest. Instead, there were soundbites from police and senior politicians condemning those who attended, especially those with Arab backgrounds.

“Anyone who wants to live here permanently must commit to freedom and democracy,” Berlin State Minister of the Interior Andreas Geisel told Radio Eins. Before long, conservative politician Alexander Dobrindt had said that asylum seekers who attended pro-Palestine rallies should be deported.

Even Die Linke, the most left-wing of Germany’s six major parties, joined in. “If we’re being honest we must admit it: we have imported antisemitism,” read a post from the party’s Osnabruck Land district office. Other members distanced themselves from the post.

Statements like these come despite figures that show around 95 percent of antisemitic attacks in 2020 in Germany were by right-wing extremists - not immigrants.

In Germany, harnessing racism in the name of fighting antisemitism is fair game. Any pro-Palestine position, especially from immigrants or leftwing activists, is dangerous. This is the view championed by journalists who are unable, or unwilling, to differentiate between antisemitism, anti-Zionism and support for Palestine. The result is a degraded discourse that empowers racism. Its other victims are logic and balanced reporting.

The strongest language around Israel’s actions against Palestinians comes from politicians and journalists who obsess about antisemitism at home, reflected in statements that single out asylum seekers for bringing antisemitism to the country that, just 80 years ago, murdered more than six million Jews.

But as the German-Jewish journalist Fabian Wolff recently told me, charges of antisemitism have been weaponised in Germany for years, used as a shield by Germans against political opponents - even if those opponents are Jewish. Israeli peace activist Shahaf Weisbein learned this several years ago, when six Germans from the left-wing Antideutsche movement stormed her film screening at a vegan cafe in Leipzig.

Blaming immigrants for antisemitism is all too easy for a political system and media described as “blind in its right eye” - oblivious towards the far-right and vicious towards the left. This is despite its self-described remembrance culture, in which the German national character strives to atone for the Holocaust. That includes unshakable support for Israel, even when it guns down Palestinian children with German-made weapons. Those who question that support, even Palestinians themselves, are labelled as antisemitic.

Forget about Stephan Balliet, the neo-Nazi who killed two people while attacking a synagogue in Halle in eastern Germany during Yom Kippur in 2019. The most dangerous proponents of antisemitism are the brown faces waving Palestinian flags, easy targets for politicians looking for scapegoats.

More pro-Palestinian demonstrations took place in Berlin in the days and weeks after the Neukolln protest. All were peaceful, but that didn’t stop Bild from reporting on “Israel hate” at a youth demonstration in central Berlin’s Potsdamer Platz, where teenagers laid still on the ground to symbolise the Palestinian children killed by Israeli air strikes.

RBB, meanwhile, took down and apologised for a live TV report describing the atmosphere at one Alexanderplatz demonstration as “very good”. Intense criticism from left and right, including from the right-wing paper Welt, forced RBB to remove the video from its website and apologise for a report that didn’t meet its “journalistic standards”. 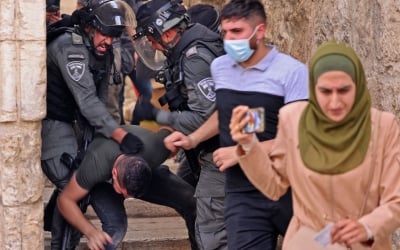 Palestinian-American journalist and activist Ali Abunimah found out what happens to voices that contradict the dominant narrative when he told a Deutsche Welle anchor that Palestinian children were “sick of paying the price for guilty German consciences”.

In the days following Abunimah’s interview, Deutsche Welle, Germany’s multilingual, international-facing public broadcaster, apologised for its “antisemitic” content and sent a memo to staff reminding them to not use terms like “colonisation” and “apartheid” when mentioning Israel. “This mistake should not have happened,” Deutsche Welle said. Sound familiar?

Reporting on the actual violence across Israel and Palestine was similarly one-sided. “More than 1,000 rockets fired at Israel,” announced the Frankfurter Allgemeine on 12 May. “Terror against Israel,” reported the Tagesspiegel, while Deutsche Welle celebrated with headlines such as: “Israel’s Iron Dome proves successful against Gaza rockets” and “Germany stands by Israel”.

It was almost impossible to find stories drawing attention to the more than 200 civilians killed by Israeli strikes. Even the New York Times, which days earlier ran a full-page ad condemning pro-Palestinian celebrities, mourned the conflict’s child victims with a front-page cover.

In Germany, we had outrageous examples to the contrary. “These are the victims of Hamas’s terror,” said Bild.

Two Deutsche Welle journalists attempted some investigative journalism by fact-checking the authenticity of the so-called “viral” posts of dead Arab children shared on social media. They asked whether images of dead kids and bombed-out buildings were, in fact, recently taken in Gaza - or were they from an earlier Israeli bombing campaign?

German elites have a responsibility to the world’s Jews, but that responsibility shouldn’t include inaccurate reporting and unquestionable support for war crimes. Politicians and journalists who willingly conflate antisemitism with the pro-Palestine movement are denying basic truths to German citizens, millions of whom have no connection to the country’s past crimes.

The world is full of grandstanding politicians, and Germany is no exception. But here, more than anywhere else in Europe or North America, they are emboldened by a media landscape that lacks the nuance to properly report on one of the most crucial moral issues of our time. As in any democracy, the media’s role should be to question the government’s narratives - not to parrot attacks from politicians who scapegoat some of society’s most vulnerable.

Matt Unicomb
Matt Unicomb is an Australian journalist based in Berlin, where he’s currently the online editor of the news, politics and culture magazine Exberliner. He tweets @MattUnicomb 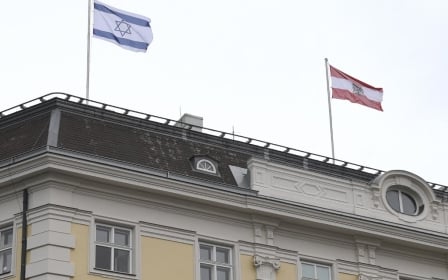