Belen Fernandez
Were the media concerned with speaking truth to power, the case of Sheikh Jarrah perfectly exposes the magnitude of Israeli hypocrisy and deceit 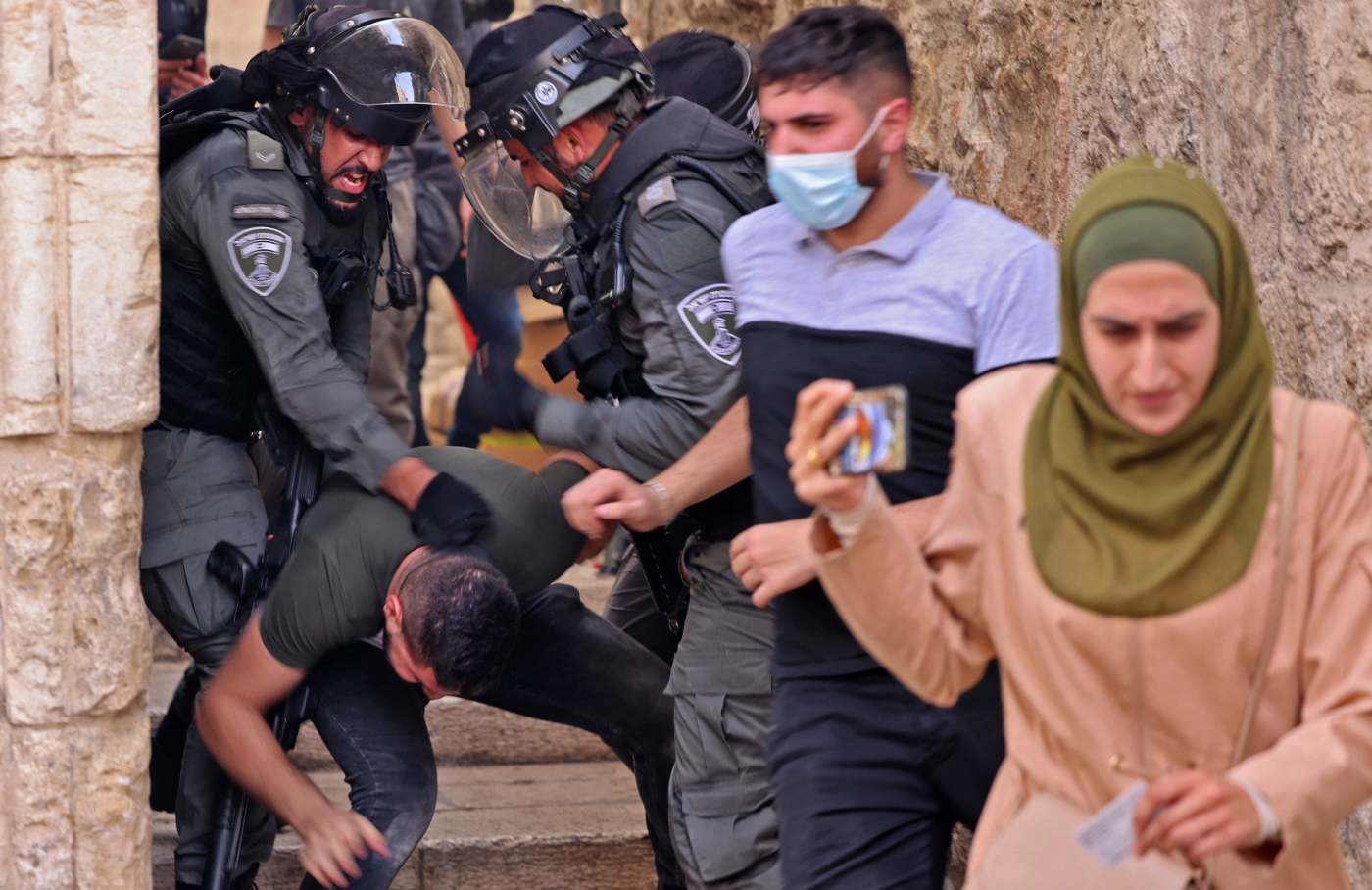 Let’s imagine some creative wartime reporting: "On April 26, 1937, the inhabitants of the Basque town of Guernica 'clashed' with German warplanes dropping high explosives and incendiary bombs. The town was pulverised in the course of the 'scuffle', and up to 1600 people perished".

When it comes to the Israeli-Palestinian conflict, the Western corporate media never miss a chance to report blatantly one-sided brutality as 'clashes' and 'scuffles'

Obviously, the above lines would never be written by any non-delusional person, since the nature of the power relationship between human bodies on the one hand and bomb-spewing airborne monstrosities on the other is quite clear.

Yet, when it comes to the Israeli-Palestinian conflict - itself a euphemism for Israel’s forever war on Palestinians - the Western corporate media never miss a chance to report blatantly one-sided brutality as "clashes" and "scuffles".

Take, for example, the Great March of Return, the overwhelmingly peaceful demonstrations that began in the Gaza Strip in March 2018. According to the United Nations, the Israeli military killed 214 Palestinians - 46 of them children - in the context of the Great March, and injured more than 36,100. “During the same period,” by contrast, “one Israeli soldier was killed and seven others were injured.”

The media takeaway from the same event: there were "clashes".

Now, Israel's ethnic cleansing operations in occupied East Jerusalem have provided news outlets with another opportunity to exercise their preferred vocabulary - insofar as they can be bothered to report on the events at all.

Forty Palestinians, including ten children, currently face eviction from their homes in East Jerusalem’s Sheikh Jarrah neighbourhood to make way for more incoming right-wing settlers - the latest round in a decades-long Israeli campaign of forced re-displacement of Palestinian refugee families from 1948. 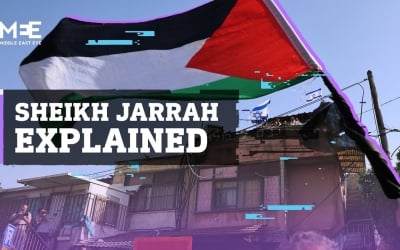 As if the injustice were not already epic enough, Israeli police have responded to protesters in Sheikh Jarrah by, inter alia, charging them on horseback and dousing the area with tear gas and skunk water - a delightful Israeli invention that has been described as "worse than raw sewage" and "like a mixture of excrement, noxious gas and a decomposing donkey".

But for the media, it’s all in a day’s "scuffle". There were "scuffles" and "clashes" galore in the Washington Post, on the ABC News website, in the Guardian, at Fox News, and again at the Post.

The BBC, for its part, has dutifully kept its audience updated about “clashes” and “confrontations”- while insisting that, in firing stun grenades and the like, Israeli police have simply been acting “in response” to Palestinian provocations (just as Israel is always acting “in response” when it, like, slaughters thousands of people in Gaza).

A New York Times article published on 7 May on Israeli police "confrontations with Palestinian protesters" meanwhile noted that “the Israeli Foreign Ministry said the Palestinian Authority and Palestinian terrorists were ‘presenting a real-estate dispute between private parties as a nationalistic cause in order to incite violence in Jerusalem’”.

In actuality, of course, the whole Israeli-Palestinian "conflict" is Sheikh Jarrah writ large: a "real-estate dispute" in which the party that violently usurped the bulk of Palestinian real estate in 1948 - and that continues to illegally occupy the rest - must cast Palestinians as terrorists in order to justify terrorising, killing and expelling them (pardon, “clashing” with them).

From the get-go, the success of the Israeli enterprise was predicated on a policy of ethnic cleansing - the same policy now playing out in Sheikh Jarrah. But it is not the function of the New York Times and like-minded publications to connect the historical dots and thereby provide a contextualised picture of systematic Israeli dispossession of Palestinians, as opposed to localised “confrontations”.

In actuality, of course, the whole Israeli-Palestinian 'conflict' is Sheikh Jarrah writ large

Furthermore, by quoting patently ludicrous Israeli foreign ministry statements without making it clear that they are patently ludicrous, the Times is merely assisting in the propagation of the Israeli narrative and the normalisation of occupation.

Imagine for a moment that, say, the foreign ministry of Guatemala issued a statement claiming that coronavirus was transmitted by unicorns. Then imagine finding this statement reprinted in the US newspaper of record without some sort of indication that the suggestion was, you know, nuts - and you get an idea of what the Palestinians are up against in terms of global media coverage.

Were the media actually concerned with rigorousness and speaking truth to power, the case of Sheikh Jarrah perfectly exposes the magnitude of Israeli hypocrisy and deceit.

Part of the alleged “justification” for evicting Palestinian families who have resided in the neighbourhood since the 1950s is that, in the 19th century, two Jewish trusts reportedly purchased a section of the area from Arab landowners. And that, in the Zionist view, is that.

Jerusalem Deputy Mayor Aryeh King - the same King who was recently caught on video expressing dismay that a certain Palestinian activist wasn’t shot in the head - offered the following reasoning: “If you are the owner of the property and somebody is squatting on your property, wouldn’t you have the right to take him out from your property?”

It’s a damn fine point indeed - if one considers the hundreds of thousands of Palestinians expelled from their properties by Israel in 1948, and the millions of Palestinian refugees currently denied the right of return. In other words, there’s loads of stuff to be reported beyond the clash-and-scuffle business - if only the truth were marketable.

Then, of course, there are the media interventions that make Western mainstream coverage look relatively sane in comparison, like the recent one in the Israel Hayom newspaper by Caroline B Glick, who takes us above and beyond clashes and scuffles to "a powder keg, courtesy of Washington”.

The upshot according to Glick is that, not only are US President Joe Biden and the Democrats empowering terrorists throughout the Middle East, there is a “coordinated Palestinian-Western assault against Israeli control over Jerusalem”.

Plus, Palestinian activists committed the diabolical act of adding English subtitles to a video of Israeli police in Sheikh Jarrah pinning a Palestinian to the ground as he says: “You are suffocating me.” Fumes Glick: “The purpose of the video is obvious – the Palestinians seek to draw a direct line between the police killing of George Floyd in Minneapolis and Israeli law enforcement in Jerusalem. And it is working.”

The prize for number one criminal offence thus goes not to Israel's ethnic cleansing, rubber bullet barrages, or police-induced suffocation but rather to - you guessed it- subtitles. And as the direct line between US and Israeli epicentres of oppression shows no signs of slackening, a media that didn’t toe that line would certainly be helpful. Palestine state
In pictures: Seven things you should know about Sheikh Jarrah's history 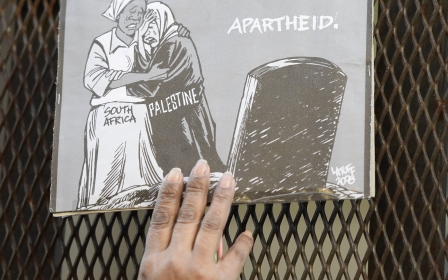