Nightmare on the Nile: Egypt’s devaluation

Amr Khalifa
Without an effective safety net for millions who will be hit hard by the devalued pound, Egypt's government may be the one in need of saving 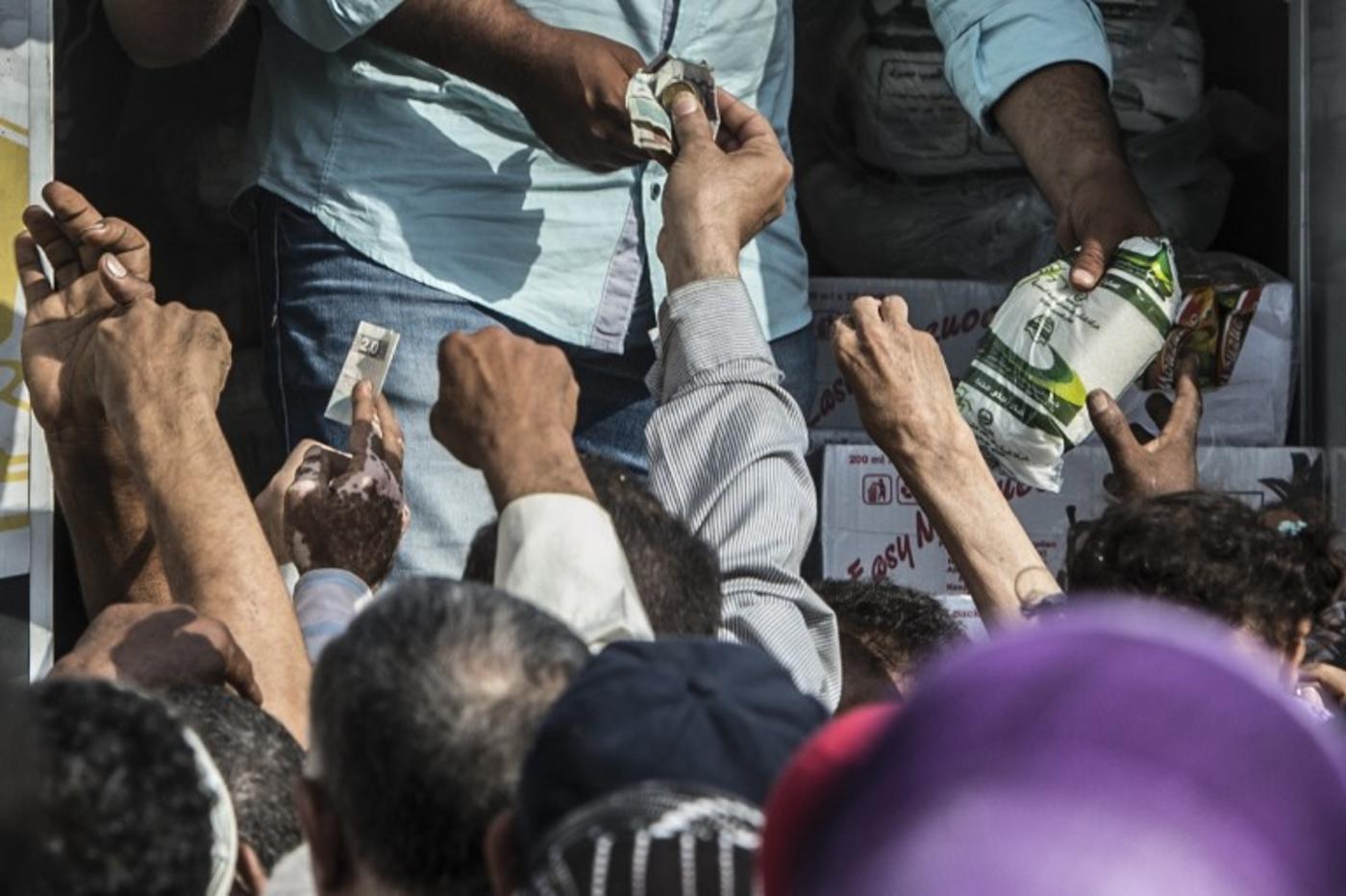 On a visit to Cairo in late April, the unofficial exchange rate stood at 10.5 Egyptian pounds (EGP) to $1. Earlier this week, a dollar fetched 18.25 EGP in the parallel market. "Business is grinding to a near halt in Egypt," reported Reuters.

With prices soaring, sometimes on a daily basis, it must look to the Egyptian public as though a stampede of elephants is hurtling in its direction

Yet, in a public statement on the same day, Egypt’s prime minister insisted "the problem is not economic". So now the inevitable happens: today, the pound has indeed been floated, devaluing it initially by 48 percent to 13 EGP. The repercussions will be massive. Of that, there can be zero doubt.

With prices soaring, sometimes on a daily basis, it must look to the Egyptian public as though a stampede of elephants is hurtling in its direction.

A journalist affiliated with a venerable organisation, on social media, spoke the unspeakable and called it a "panic". As the pound plunges, further fears of hyper-inflation stoke other associated malaise. This plunge and a planned devaluation of the pound have put analysts and laymen alike in the crosshairs of uncertainty.

‘We are now in hell’

Even as the World Bank stands at the ready, willing to put "its money on the table", Christine Lagarde, IMF managing director, stated the obvious about the Egyptian currency markets, this past weekend: "There is currently a crisis."

She is correct: "There is a 100 percent" differential between the official price at 8.88 EGP and the "grey market price" at over 18 EGP. The nature of that interplay has a direct impact on the prices of imported goods, leading the Minister of Supply Khaled Hanafy to say earlier this week, when speaking about the deficit in rice to parliament: "Help me, may God help you."

The currency crunch, in and of itself, is not the central issue. Rather, it is a reflection of deep-seeded structural economic problems. How the currency market, IMF conditions, consumer prices and inflation are all affected by one another will, without much doubt, decide whether the Sisi government is capable of surviving the maelstrom.

Mohamed El Dahshan, an Oxford-trained economic expert and non-resident fellow with Tahrir Institute for Middle East Policy, believes the worst is yet to come. "We are now in hell and the only way out is through," he told me this week.

Two issues often cloud the view when it comes to economics in Egypt: a lack of transparency and clarity from Egyptian authorities and the resultant confusion of the populace.

So let’s simplify things: think of a lingering toothache, if you will. Problems of that sort do not fix themselves and the longer you ignore it, the more it hurts. Eventually, instead of an easy fix at an early stage, a tooth extraction or oral surgery becomes an urgent necessity.

Relations between the IMF and Egypt are contentious at best, with historical issues of trust - or lack thereof

An experienced dentist and a willing patient can end the pain. But in our situation, we have a doctor-patient relationship on the rocks. Relations between the IMF and Egypt are contentious at best, with historical issues of trust - or lack thereof.

But, as El Dahshan said, Egypt has no choice: “We are past the luxury of choosing a solution…[our] back [is] against the wall.” Today, the Central Bank of Egypt recognised the same.

While progressive devaluation “would have been nice”, he said, no matter what degree of pain Egyptians go through at this point, the only procedure powerful enough now – and the one prescribed by Lagarde and most experts - is shock therapy devaluation.

Logic and reality have Egypt in their vice grip: the time for devaluation is now.

Falling through the nets

Ordinarily, when examining potential scenarios, some will see the glass half full and others half empty, but the nature of this crisis is serious, something that economic experts recognise. In a discussion this week with Fatma al-Assyouti, an Egyptian economist and researcher, she focused on the effects on the Egyptian consumer - and with good reason.

While being more optimistic than others on inflation, she envisions inflation close the 20 percent range, high enough on its own. But after devaluation, she warns "the impact will be negative on prices…the poor can and should be protected”.

Social safety nets are packaged as part of the IMF solution, but in Egypt’s case, they would not be a solution because of the country’s systematic corruption and "many deserving people fall through the net,” said Dahshan. With the safety nets mired in corruption, worries run high.

So it must be asked: if they are failing the poor now, how, without structural and enforceable changes, will those nets protect the vulnerable later on? Bear in the mind that the role of the Muslim Brotherhood as a social safety net for the poor, a role played well especially in poorer neighbourhoods during Mubarak’s era, is a thing of the past.

You had to have been sleeping in a cave in recent months to miss the videos, posts and pictures showing the suffering of a large section of Egyptians under the weight of rising costs of rice, sugar and flour, just to mention a few food items. It is about to get much worse.

There are critical nuances to the food commodities market that escape the layman, but are important to understand, Noaman Khalid, an economist with CI Capital Management, explained to me. Sixty to seventy percent of goods are imported at black market exchange rates, but the truly life or death goods – the most basic foods on which the vulnerable rely - are bought on the official exchange rate.

With the devaluation, these effects will be monumental, Khalid explained. Those basic foods "will be repriced (at) the new rate" and the result will be a catastrophic rise - as high as 40 percent, he said.

Those most vulnerable number in the tens of millions in a country as strapped economically as Egypt, and today many must be praying the government knows what it is doing.

The last time Egyptians revolted against price hikes was January 1977 when IMF-related hikes hit the all-important bread sector. A "lack of communication" by government did not help matters, said Assyouti. But this time around it will affect many more sectors than bread and, if anything, communication between Tareq Amer, head of the Central Bank of Egypt, the people and the market is at an all-time low.

A quick scan of social media in the past 10 days relays a picture of confusion and panic. "Do you know what is happening?” is a common refrain.

Amer should shoulder much of the blame for this lack of communication, argued Khalid. "He kept giving signals for several months without taking any action," said the economist. This "caused him to lose everyone’s trust," and, in the process, decreased his credibility.

Where there is no trust, how can there be an effective execution of such a delicate procedure like devaluation at a time of great political and economic instability?

Why does Egypt need to devalue? With inflation hitting 15.5 percent, and food costs the highest they have been in five years, a country strapped for foreign reserves struggling to maintain enough for a necessary devaluation, and an IMF that has, clearly, enunciated the need for the move, this is no longer optional, but a must. It is no wonder the trigger was pulled.

What to expect now that the pound has been floated is deeply concerning to all Egyptians - for varying reasons. From Assyouti’s perspective, Egypt will continue to "muddle through until there is a better government and a better governor of the central bank".

Imagine a burning apartment building with the poor on the roof. There is but one choice: jump

This seems to be a recurring theme: Amer of the CBE is not the right man for the job. Such a sensitive position should not be filled by someone with a background in banking, but by an economist, said Khalid.

Yet choosing Amer to lead is just the kind of decision-making emanating from the Egyptian leadership – and why there are justified concerns that a crisis, instead of being managed properly, may turn into a fully fledged disaster.

If inflation is to double "within the next few months", as Dahshan predicts, it will be at "30 percent-plus" as a direct result of the floating of the pound and compounded by a rising international food commodities market. Such a hyper jump in prices will greatly pressure a regime already losing supporters by the droves.

You can suppress and oppress and many in this ultra-nationalist environment will not flinch. But tell these same hawks, from various economic classes, that the price of rice, sugar, wheat - directly impacting bread - will rise 30 percent, and essentially, what you are saying is that they are taking their political life into their hands. Under enough economic pressure, Egyptians will not wait for potentially positive, long-term, outcomes such as increased foreign investment.

Imagine a burning apartment building with the poor on the roof. There is but one choice: jump. There will be damage. It may only be a broken arm or leg if we are lucky, perhaps some cracked ribs. But for some – the poor atop the building -  the jump may be fatal.

Jumps from the fifth floor kill. But jump Egypt just has.

If the government is not ready with an effective safety net, it may be the one in need of saving.

Photo: Egyptians buy sugar from a truck in the capital Cairo on 26 October 2016, as the country suffers from a sugar shortage (AFP).