The other side of the coin in Turkish media 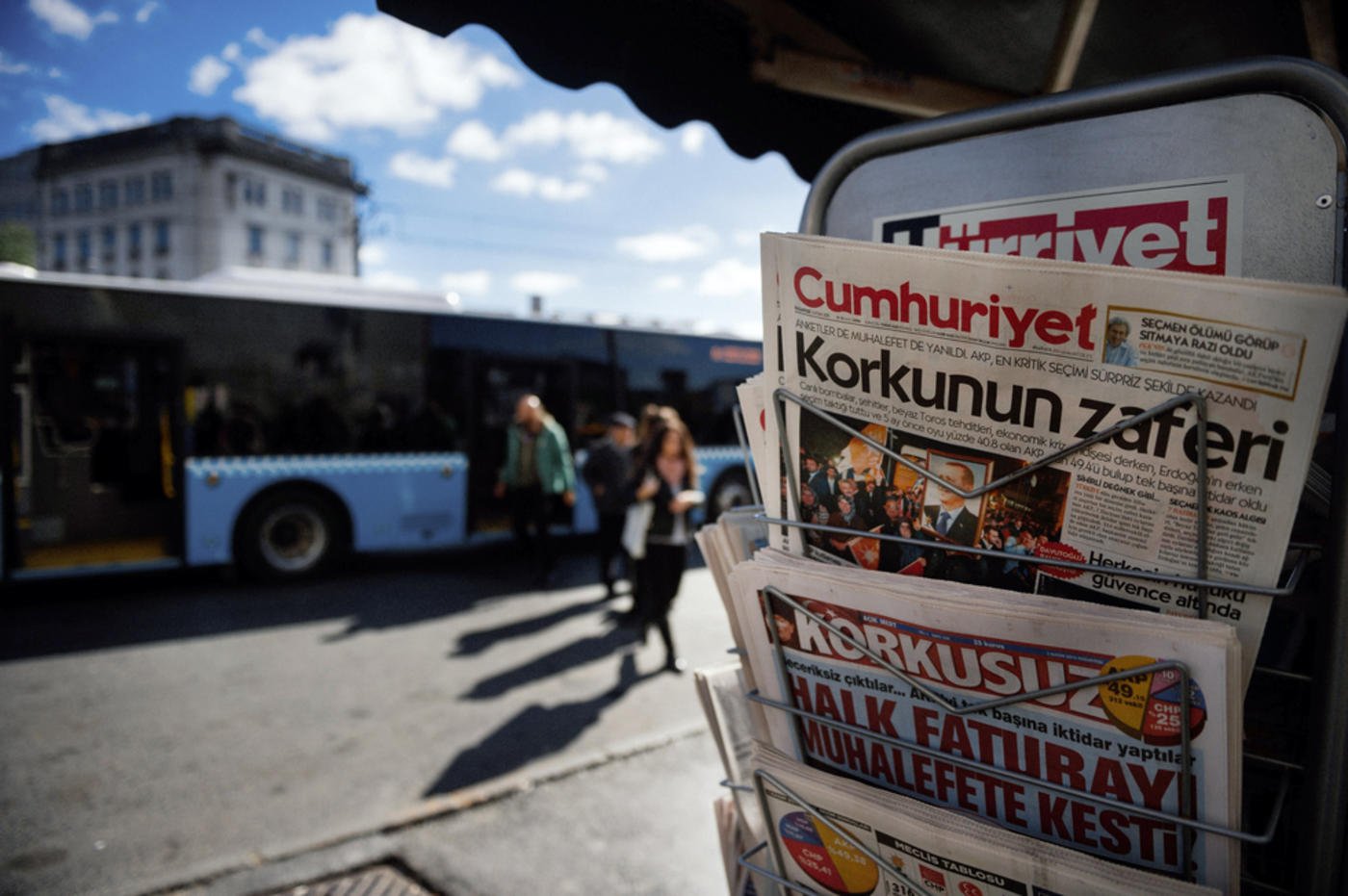 Turkey had been portrayed very negatively in global media on a regular basis in the past few years, and more recently, Turkish President Recep Tayyip Erdogan and the ruling Justice and Development Party (AK Party) have been accused of running the country in an authoritarian way and silencing the critical media.

Despite a powerful media onslaught carried out by anti-Erdogan circles both at home and abroad, the majority of the people in the streets in Turkey showed that they did not agree with what has been reported as the AK Party was elected the for the fourth consecutive term with 49.5 percent support in November.

However, Turkey's electoral choices are neither reflected in the country's current media landscape nor in the international coverage of the elected government. And reports on media freedoms in Turkey make it sound – bizarrely – worse than many of the globe's authoritarian regimes.

According to the 2014 Reporters Without Borders’ (RSF) press freedom index, life for journalists in Turkey is worse than in many dictatorships, ranking at the low 154th place among 180 countries. And the US-based Freedom House report lists Turkey among the Not-Free countries.

I wonder, how many of the countries above the rank 154 in the RSF index would allow for front-page headlines like "May this government of murder be toppled"? How likely are you to see "Palace gone mental" splash the covers of newspapers in Morocco or Kuwait, for example? What would happen in France if mainstream newspapers or journalists seriously accused President Hollande of masterminding the Paris terror attacks?

The Freedom House brands Israel as a country with a free press, without taking into account how Palestinian journalists in the occupied West Bank or the besieged Gaza Strip are treated, nor how difficult it is for some foreign journalists to cover the conflict. Regardless of what one may think of media freedoms in Turkey, one should not take such reports as balanced or at face value.

And let's not forget that the Turkey office of the Vienna-based International Press Institute (IPI) is headed by senior editors from the Milliyet and Hurriyet dailies – i.e. newspapers whose records are not so bright with support for previous military coups and bans on freedoms in Turkey.

Statistically speaking, the five best-selling papers are the Zaman, Hurriyet, Sozcu, Posta and Sabah, totaling 2,029,958 papers a day on average from 23 November to 30 November. Only Sabah is pro-government as the other four strongly oppose the AK Party, and above all Erdogan.

Overall, 65 percent of the daily newspapers in Turkey openly call themselves anti-AK Party and five percent remains in the grey area, while remaining 30 percent support the government.

The cases of arrests of journalists are mainly with issues related to breaking the law, but even when taking them into account, the bulk of media coverage has been and remains anti-government – uninterrupted. In many cases, those detained are released, despite the fact that had they acted in such a manner that in the West they would have been fired, sued or even jailed.

They include journalists who on their official Twitter accounts accused the president of giving the orders for the Ankara bombing.

On another occasion, one newspaper ran the front-page headline accusing Erdogan of sending weapons to ISIS but when you get to read inside the story, you find no evidence mentioned in the article. Instead, you find information about military support to the groups that are actually fighting against ISIS in Syria.

On her Twitter account, Sevgi Akarcesme, a columnist with Gulen movement-affiliated Zaman and Today's Zaman newspapers, posted a tweet when opposition parties failed to form a coalition government and an early election was on the horizon. "Thanks AKP for proving the argument that Islamists come with elections but do not go with elections!" she said, making allusions to coup attempts as a solution. Bekir Cınar, an academic, responded to her, saying: "The AKP leaves power either by streets or military intervention."

It is important to remember that such rhetoric is not harmless in a country where the military – backed by some quarters of the press – toppled four democratically elected governments.

Mainstream media outlets, especially the Hurriyet and Cumhuriyet, had acted as the military’s mouthpiece. In support of military coups against democracy, Hurriyet ran headlines like "If necessary we will use even weapons," "Turkish military on duty, our Armed Forces have seized control across the country," and so on. What Cumhuriyet said after the 1960 coup was not any different: "Heroic Turkish army took control of the governance across the country last night."

Even recently, the anti-Erdogan media did not hesitate to hint at prompting coups against democracy, using media freedom as a shield for their anti-democratic steps. Hurriyet published news of former Egyptian president Mohamed Morsi's death sentence with a photograph of President Erdogan with the title "Death sentence for the president who received 52 percent of the vote." The story implied Erdogan will face the same fate of Morsi.

Turkey had also been harshly criticised when it deported a Dutch reporter based in the predominantly Kurdish southeastern province of Diyarbakır on accusations that she supported militants from the Kurdistan Worker's Party (PKK), which is classified as a terrorist group by Ankara, the EU and the US, among other countries.

The reporter had actually wrote that she'd be "disappointed" if the jailed PKK leader Abdullah Ocalan declared a permanent ceasefire with the government. I thought that glorifying a terrorist organisation or inciting violence is taken very seriously in the West.

Ironically, Dutch Social Affairs Minister Lodewijk Asscher had recently told De Telegraaf newspaper that those who preach hatred or glorify terrorism face deportation – from Holland. So why should Turkey behave any differently?

The world, including Turkey, has been up in arms in the face of the terrorism of ISIS, which is but a few years old. Why shouldn't Turkey be even more worried about terrorism that has been going on for more than four decades?

Also, threats or false claims are acts that are libellous or may carry punitive legal punishments in many quarters of the world which consider themselves to be free, so why should Turkey be any different?

Pro-government media under fire too

The chairman of the pro-government Star Media Group was caught in the crossfire and his bullet-proof car was hit 22 times by assailants in August. The same media group was also attacked in July, when a suspicious package was left in front of the group's building in Istanbul's Ikitelli district, which was later detonated by the bomb squad at the scene.

The Star Newspaper was bashed by the People's Democratic Party (HDP) co-chair Selahattin Demirtas during the election campaign for Turkey's 7 June parliamentary elections. At around that time, the British Guardian newspaper labelled Demirtas “Kurdish Obama” without mentioning how he reportedly sparked deadly clashes between pro and anti-PKK Kurdish groups in October 2014, leaving over 50 people dead.

Also before 7 June elections, the main opposition Republican People's Party (CHP) secretary general Gursel Tekin made astounding remarks where he threatened to seize critical newspapers right after an electoral victory. "On June 8 and 9, our first job is to seize these filthy newspapers," he said. As you may have guessed, Erdogan critics who brag about "freedoms" to cover their defamation campaigns did not say a word on Tekin’s threats.

According to data compiled by the law department of the Turkuvaz Media Group, which is labelled as pro-government, there have been 391 lawsuits filed against the media group since 2013. In addition to Turkuvaz Media Group facing lawsuits, some pro-government columnists and journalists also share the same fate. Cem Kucuk, a columnist for Star newspaper, says he has seen 150 lawsuits filed against him in a year. Turgay Guler, the editor-in-chief for Gunes newspaper, says he faces up to 12-and-a-half years in prison in total in lawsuits. Ahmet Kekec, another columnist for Star, is a defendant in seven ongoing cases.

So, a journalist needs some guts to write about the Gulen Movement, the Dogan Media Group or their friends from the pro-Kurdish HDP and CHP. Journalists working for pro-government media are also aware that if they get caught in the crossfire, the world will not hear them.

Free press must be protected

It is no secret that there are problems in the media in Turkey today and we should always strive for more media freedoms. But placing Turkey behind Afghanistan in press freedom cannot be explained in a logical way.

According to the Turkish constitution, insulting the president is a criminal act and there had been various lawsuits opened against some journalists but none of them had ended in a conviction so far. Maybe after amending the constitution, that part should be scrapped or altered to meet EU standards.

However, one thing we must not do is assume that the anti-democratic forces, including those who seek to justify terrorism or military coups, are working for the interests of the public or the freedom of societies. They have not, are not, and will not – unless we all agree on honest journalism that is also free.

Photo: Turkish newspapers are displayed at a newsstand in Istanbul on 2 November, 2015 (AFP).