Pompeo spells out the new normal: All criticism of Israel is 'antisemitic' 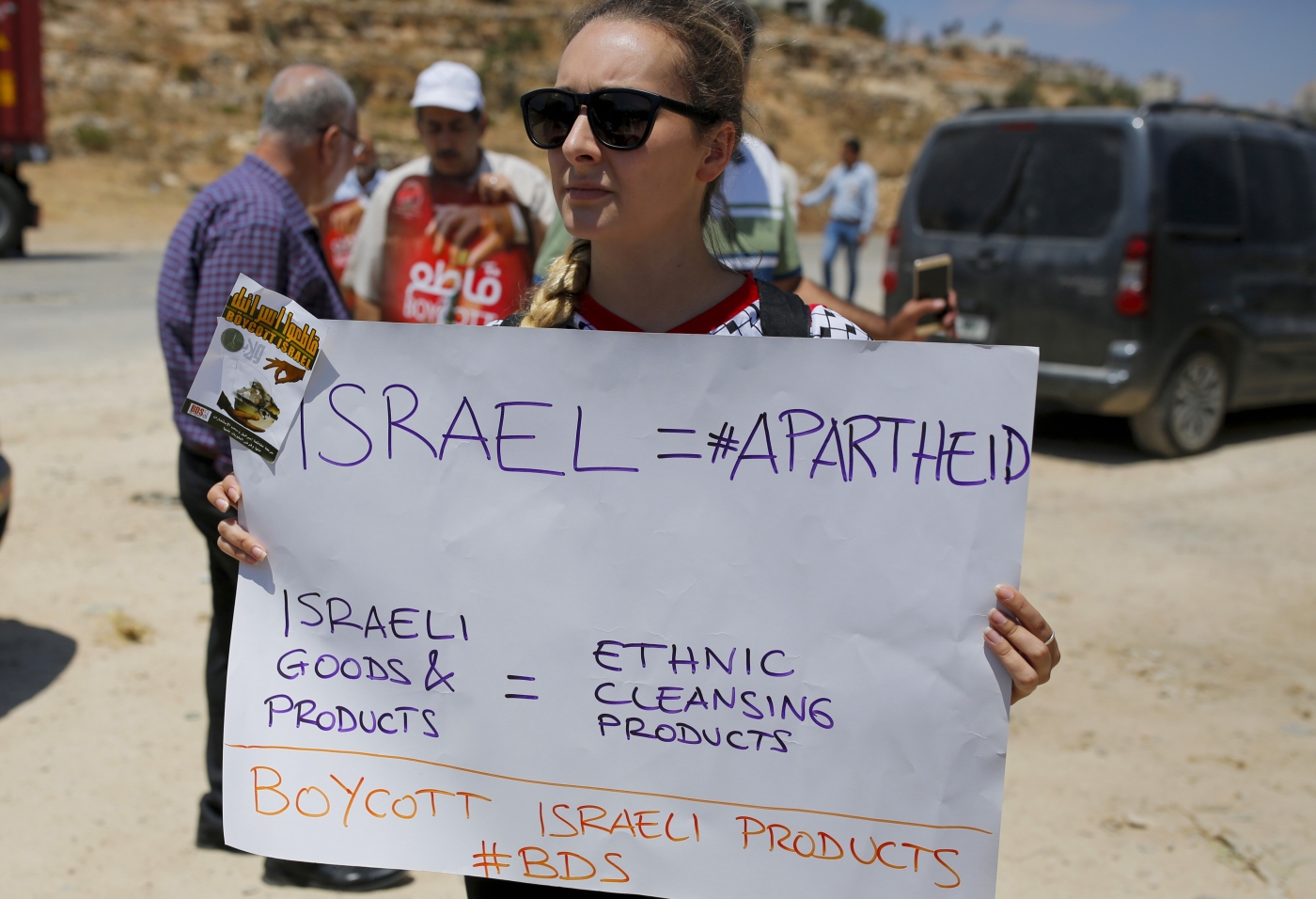 A woman demonstrates at the Ofer checkpoint near Ramallah in Occupied West Bank calling on Palestinians to boycott such imports, on 6 August, 2019 (AFP)

It is tempting to dismiss last week’s statements by Mike Pompeo, the US secretary of state, equating anti-Zionism with antisemitism and suggesting the global movement to boycott Israel is driven by hatred of Jews, as the last gasp of a dying administration. But that would be foolhardy.

Pompeo’s decision to label all but the most tepid criticism of Israel as antisemitism is fully in line with the current redrawing of the limits of western political debate about Israel.

To underscore his message, Pompeo issued his statement as he headed to an illegal Jewish settlement in the West Bank – the first such official visit by a US secretary of state. New guidelines announced that in future the US would mark settlement goods as "Made in Israel", concealing the fact that they are produced in the occupied Palestinian territories.

For good measure, Pompeo described the boycott, divestment and sanctions movement (BDS), widely supported by Palestinians, as a "cancer". "We will regard the global, anti-Israel BDS campaign as antisemitic," he added. The state department would identify any individual or group opposed to "doing business in Israel or in any territory controlled by Israel" – that is, in the settlements – "and withdraw US government support".

The settlement visit was doubtless intended as affirmation by the departing Trump administration of its recognition of Israel’s right to annex swaths of the West Bank seized by settlers. That position was cemented into a so-called "peace plan" earlier in the year.

Hanan Ashrawi, a veteran Palestinian peace negotiator, warned that Pompeo’s declarations would be hard for the new Democratic administration under Joe Biden to reverse, either rhetorically or substantively, when it takes office in January. "Such malicious measures are intended to corner the incoming US administration with layers of legal and administrative measures that maintain the destructive Trump legacy beyond his disruptive term," she said.

To change course, Biden will have to declare the settlements illegal and come to the defence of the BDS movement – incurring the wrath of Israel’s lobbyists in Washington and opposition from the overwhelming majority of his own lawmakers in Congress.

It is fanciful to imagine he will do either.

The reality is that Israel’s endless facts on the ground, all ultimately pushing towards annexation, will continue as before, whether Biden or Trump is in charge. More significantly still, however, Pompeo’s statement marks the logical endpoint of a new foreign policy consensus on Israel that has rapidly taken shape in the US and Europe.

By this stage, only concerted action from western states to penalise Israel can alter the cost-benefit calculus that has so far made expanding the settlement enterprise pain-free. But trenchant criticism of Israel - of the kind so urgently necessary – is now increasingly off-limits. Instead western states are actually defaming and outlawing even the most limited forms of grassroots, non-violent action against Israel, like the BDS movement.

Pompeo's statement, in fact, marks a complete inversion of the United Nations' decision in 1975 to declare Zionism "a form of racism and racial discrimination". At the time, supporters of Resolution 3379 made a self-evident case: any state is structurally racist if its founding ideology, as with Zionism, accords superior rights to citizens based on their ethnicity or religion.

An international convention further makes clear that such a political arrangement amounts to apartheid.

In this topsy-turvy worldview, nuclear-armed Israel is the victim, not the Palestinians who have been dispossessed and ethnically cleansed by Israel for decades

While in the 1970s Israel made efforts to obscure its ideological character, it has long since abandoned such pretence. In 2018 Israel passed the Nation-State Law making its apartheid explicit. The law affirmed superior legal rights for Jewish citizens over a large minority of Palestinian citizens.

In late 1991, however, the UN was browbeaten into revoking the "Zionism is racism" resolution after the Soviet Union fell and the US, Israel’s patron, emerged as the sole global superpower. We have now reached the point where, as Pompeo’s statement underscores, it is criticism of Israel and Zionism that is viewed as racism.

In this topsy-turvy worldview, nuclear-armed Israel is the victim, not the Palestinians who have been dispossessed and ethnically cleansed by Israel for decades. This derangement is so entrenched that last year the House of Representatives passed a near-unanimous resolution – pushed by the Israel lobby group AIPAC – denouncing any boycott of Israel as antisemitic.

Some 32 US states have passed legislation uniquely denying First Amendment rights to those who support a boycott of Israel in solidarity with oppressed Palestinians. Other states have similar legislation in the pipeline.

The absurdity extends beyond the US.

The German parliament passed a resolution last year that declared boycotting Israel – a state occupying Palestinians for more than five decades – comparable to the Nazi slogan "Don’t buy from Jews". Bonn has the power to deny public funds to any group that supports, however tangentially, such a boycott. 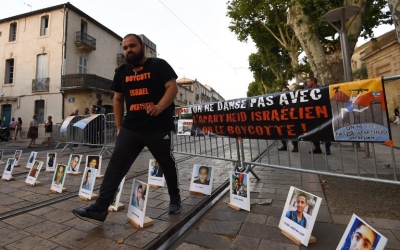 Last month, Israeli Jewish academics in Berlin became the latest group targeted. Their art school removed their web page and cut funding for a series of workshops critical of Zionism after an outcry from German anti-racism groups and the media.

A similar inversion of reality is taking place in the UK, where the government has ruled that local authorities are not allowed to divest pension funds from Israel. These investments, some in illegal Jewish settlements, are assessed at nearly £3.5bn ($4.7bn), meaning ordinary Britons heavily subsidise Israel’s occupation.

The decision by Boris Johnson’s government was struck down by Britain’s highest court in April, but the government has vowed to bring in new anti-BDS legislation that would nullify that ruling.

In France, meanwhile, support for boycotting Israel has long been treated as a criminal offence under anti-discrimination legislation. A group of 12 Palestinian solidarity activists lost a series of court battles in France after they were convicted a decade ago of calling for a boycott outside a supermarket. The activists received a reprieve in June only after the European Court of Human Rights in Strasbourg ruled that their convictions violated Europe’s human rights convention.

That judgment serves only to highlight the growing chasm between, on one side, the political and legal environments being shaped by lobbyists in individual western states and, on the other, the principles of international law and human rights established in the wake of the Second World War. 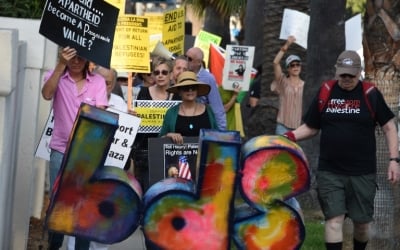 Pompeo’s claim that opposition to Zionism – the ideology oppressing Palestinians – is antisemitic has taken widespread root because pro-Israel activists have managed to advance an entirely novel definition of antisemitism. In 2016 the International Holocaust Remembrance Alliance adopted a highly contentious and politicised “working definition” of antisemitism – one promoted by Israel. The definition is illustrated with 11 examples, seven of which refer to various criticisms of Israel, including that it is a "racist endeavour".

A conclusion reached by the UN 45 years ago – that it is racist for a state to promote rights based not on our shared humanity but on ethnic or religious difference – is now defined as antisemitic. Donald Trump used an executive order to incorporate this weaponised definition into the Civil Rights Act last year, thereby chilling speech about Israel, especially on US campuses.

The IHRA definition is now widely accepted in the West, making it all but impossible to mount a defence against the malicious characterisation of support for Palestinian rights as equivalent to hatred of Jews. Pompeo is simply echoing a discourse that has rapidly become entrenched.

This became obvious when the British Labour party found itself plunged into a manufactured controversy in early 2016 that, overnight, it had become uniquely and institutionally antisemitic. The campaign began shortly after the membership elected as leader Jeremy Corbyn, one of a handful of socialist MPs in Labour and a vocal advocate of Palestinian rights.

The degree to which Israel has become untouchable – even when criticisms accord with international law – was highlighted when the United Nations compiled a list of businesses colluding with Israel’s illegal settlements on occupied Palestinian land.

Publication of the database was repeatedly delayed for fear of the backlash the UN would receive for offending Israel and its lobbyists. The list finally saw daylight last February.

But the firms identified in the list have not come under any significant pressure to pull out of the settlements. In fact, what pressure they have faced has been for them to stay put, or otherwise face accusations of unfairly discriminating against Israel.

Countervailing pressure on them could come through the actions of popular, grassroots groups calling for a boycott. But western states now characterise the BDS movement that organises such boycotts as antisemitic too.

Quiescence and inaction are the only options allowed, if one wishes to avoid being labelled antisemitic.

Pompeo’s remarks in support of the settlements last week were foreshadowed by reports last month that the State Department is considering a mechanism for labelling the world’s most prominent human rights groups as antisemitic. The US would then urge other states not to deal with organisations such as Amnesty International, Human Rights Watch and Oxfam.

Quiescence and inaction are the only options allowed, if one wishes to avoid being labelled antisemitic

Pompeo’s approach – ridiculous as it might have seemed a decade ago – does not stray far from the current logic in western capitals. Their officials have ridden roughshod over international law for some time – especially with their "interventions" in Arab states such as Iraq, Libya and Syria.

As the Palestinian cause is progressively sidelined by both western states and Arab states, groups like Amnesty and Human Rights Watch have found themselves solitary critical voices on Israel. They are almost alone in continuing to articulate concerns about Israel’s egregious violations of international law, especially in relation to the settlements.

As a result, Pompeo’s moves to silence them may face much less resistance than many observers might assume.

Sadly, there is a self-fulfilling logic to these moves by the Trump administration. From Corbyn to Amnesty International and the BDS movement, those trying to uphold human rights and international law are being forced on to the defensive. 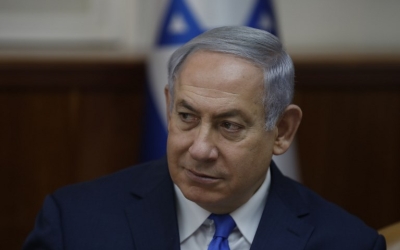 They have been strong-armed into the dock and must prove to their accusers the impossible: their innocence, measured not in concrete, public positions but in what supposedly lies behind them, in the form of private and unprovable motives.

This is safe ground for right-wing politicians and lobby groups.

Antisemitism is the insidious charge that sticks to anything it touches. The stain is all but impossible to remove. Which is why those standing up for human rights – and against racism and oppression – are going to find themselves ever more aggressively condemned as antisemitic.

This is a path not towards peace and reconciliation but towards greater tribalism, confrontation and violence. It strips out the tools of argument and persuasion, as well as non-violent forms of pressure like boycotts, and ensures a world ruled by "might makes right". 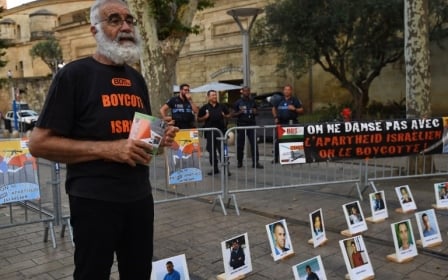 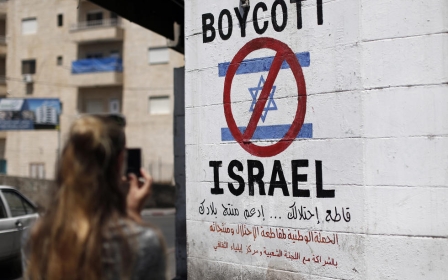 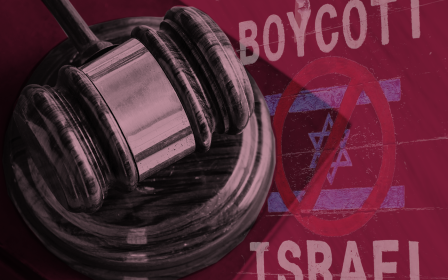