Qatar and the GCC feud: The climbdown begins

Bill Law
From 13 demands down to six 'principles', it's clear that Mohammed bin Salman and Mohammed bin Zayed's all-guns-blazing approach against Qatar was a blunder. But will lessons be learned? 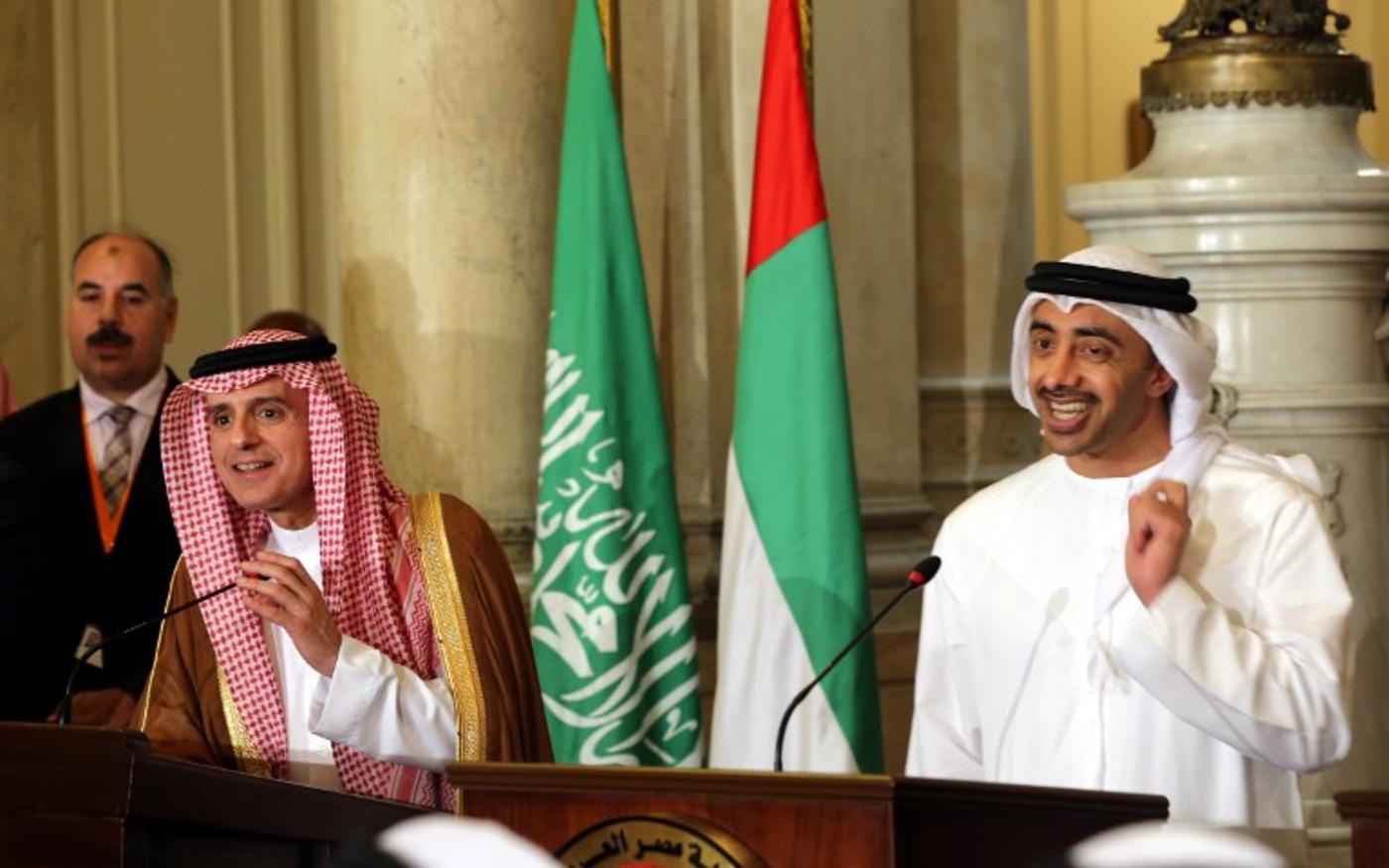 Reading the news of the 6 July meeting in Cairo of the foreign ministers of Saudi Arabia, United Arab Emirates, Bahrain and Egypt and of their deliberations over Qatar reminded me of a delightful nursery rhyme that my children, most of them now grown up, still love.

It’s called The Grand Old Duke of York. And the words go like this

Oh, the grand old Duke of York,
He had ten thousand men,
He marched them up to the top of
The hill and he marched
Them down again.

History records that the duke, the second son of Britain’s King George III, was not an old man but rather a young man of 30 when he was given his first high command. Although Frederick did not especially distinguish himself on the field of battle, to be fair to him, he is credited with a significant reorganisation of the British military.

Still, the ditty that emerged in the wake of a disastrous Anglo-Russian campaign against the Dutch which saw the Duke and his Russian allies beat an ignominious retreat, will forever be his epitaph.

And when they were down

The Cairo statement with its six “principles” was a large march back down the hill from the 13 demands issued on 23 June. The demands, you may recall, included the shuttering of Al Jazeera, the ending of contacts with the Muslim Brotherhood, a dramatic scaling back of cooperation with Iran, the removal of Turkish troops from Qatar, and submission to monthly external compliance checks. There were also public demands that the Qataris pay billions in reparations for the damage they allegedly caused to their neighbours during and after the Arab Spring.

It was unconditional surrender, an unprecedented attack on the sovereignty and independence of a fellow GCC brother. The Qatari foreign minister quite rightly stated that the list of demands was impossible to accept. As the minister put it: "Everyone is aware that these demands are meant to infringe the sovereignty of the state of Qatar, shut the freedom of speech and impose auditing and probation mechanism for Qatar.”

Before I return to the main thrust, allow me a brief moment to savour the irony of those words. Qatar, of course, has detained and expelled foreign journalists who have told the story of migrant abuse in the building of the World Cup 2022 facilities. It jailed a poet who mocked the ruling family. So spare me the guff about free speech and I can agree without rancour that the minister was pretty much on the money with what he said.

The trouble with the 13 demands is that it left the Saudis and the Emiratis nowhere else to go but over the top or down the hill.

No doubt they were emboldened by Donald Trump’s endorsement in his 21 May speech in Riyadh of their right to do pretty much what the heck they wanted to do. And his early but profoundly ignorant tweets that Qatar was the source of all terrorism funding must have boosted their confidence even more.

Did The Donald not know that there are 10,000 service personnel serving at Al Udaid, the largest US airbase outside the American mainland and that the base is located in…er Qatar?

It didn’t take too long for the Pentagon and the State Department to brief the commander-in-chief that it might not be such a good idea to isolate and antagonise the Qataris who, of all the GCC states, have been by far the most supportive of the US military. And so, to the enormous relief of Messrs Mattis and Tillerson, Donald went back to attacking the lying US media.

Did The Donald not know that there are 10,000 service personnel serving at Al Udaid?

Meanwhile, back at that hill, Mohammed bin Salman, or MbS, and his partner in the campaign against Qatar, the UAE’s Crown Prince Mohammed bin Zayed, or MbZ, were starting to realise that they were losing the PR war and looking like the bully boys on the Arab block, beating up the little upstart runt. The optics, as they say, didn’t look good on this one.

And so to Cairo. After a 10-day deadline to respond to the 13 demands had been extended by two days and after deliberating for some time over the Qatari response to the demands, the gang of four came up with phrases straight out of Diplomacy 101.

Gone was the language of demand and in its place was a call to shared principles such as: “Prohibiting all acts of incitement and all forms of expression which spread, incite, promote or justify hatred and violence.” That one is not hard to sign up to. A lot better than shuttering Al Jazeera.

Or how about: “The responsibility of all States of international community (sic) to confront all forms of extremism and terrorism as a threat to international peace and security.” That’s certainly a big improvement on submitting to monthly compliance checks.

The strategy now seems to be to go back to the uneasy detente arranged by the Kuwaitis in 2014, after the Saudis, the Emiratis and the Bahrainis pulled their ambassadors in protest at what they perceived as, among other things, a too cozy relationship with Iran. Back then Tamim, newly installed as emir of Qatar after the abdication of his father, had apparently agreed to a number of points, including reining in the editorial exuberance of Al Jazeera for the Muslim Brotherhood.

And although Tamim agreed to something – no one really knows exactly what - not much changed: the Qataris continued to support the Muslim Brotherhood, as well as Hamas and other groups deemed terroristic. Al Jazeera continued to get under the skin of the Saudis.

The adults in the room

Something needed to be done to bring the Qataris at least a little more in line. But rather than a calibrated approach, MbS and MbZ went in with all guns blazing, catching the Qataris completely off guard and leaving them deeply shocked.

The big loser is… Mohammed bin Salman. Yet again, his rash and impulsive nature has caused him grief

But the Qataris proved themselves much more adept at the game of diplomacy. They behaved like the adults in the room. They remained cool, calm and collected while the media in Saudi Arabia and the UAE were whipping up a frenzy of war fever. The Qataris said in effect “we are open to dialogue but, please, take the gun away from our head".

And you can be sure that the Americans, the Germans, the Italians and even the loath-to-get-involved British foreign office have been quietly saying pretty much the same thing.

Qatar will give a little, no doubt. Calm and diplomatic relations will be restored but not for a while yet. I doubt that the Saudis will now push too hard for further significant sanctions.

Nor will the Emiratis, cognisant as they are of the fact that the Qataris are continuing to move 2 billion square feet a day of gas through Oman through the Dolphin pipeline to the UAE at below market prices. Throughout the crisis the Qataris have consistently and sensibly said they will not turn off the tap. More proof of Qatari maturity in their handling of the feud.

That leaves one pondering the question of winners and losers. The GCC is the weaker for this row and will not heal any time soon, if ever. Iran has stood aside and watched this act of folly with a great deal of satisfaction.

So count the Iranians as winners. And the big loser is… Mohammed bin Salman. Yet again, his rash and impulsive nature has caused him grief. He rushed into war with Yemen, thinking it would be an easy win. More than two years on, the war continues with terrible consequences to the Yemeni people.

He launched his bold reconstruction of the Saudi economy, Vision 2030, with a huge blast of publicity. One year later and much of the shine has gone off the vision. Most damaging for him has been the climb down on slashing hugely bloated public sector wages and benefits. In September last year, he announced cuts that took away up to 40 percent of take-home pay for government workers. And then in February, he restored the lost income, managing to look indecisive as Vision 2030 fell at the first hurdle.

Now he has blundered diplomatically. He may have sidelined his chief rival to the throne, Mohammed bin Nayef, who lost both his position as crown prince and minister of the interior on 21 June, in what amounted to a very Saudi coup. But as the mistakes begin to pile up, his enemies grow within the ruling family.

And as Vision 2030 stalls, the international business community is starting to weigh up the advisability of investing too heavily in a Saudi economy that urgently needs foreign money and an empowered private sector if it is going to achieve the fundamental changes that MbS believes are required.

On three fronts then, military, economic and diplomatic, he has been found wanting.

So what now for the young prince in a hurry? Having marched to the top of the hill, Mohammed bin Salman now finds himself neither up nor down. Unquestionably, he is a leader of unbounded energy and intelligence and he has caught the imagination of young Saudis.

But is he capable of learning from past mistakes or will he continue to rush in where wiser heads have chosen not to tread?