A senior Saudi royal with a legacy project for Donald Trump

Bill Law
Prince Turki urges Trump to keep the nuclear deal and get the Israelis to make peace and drop their nukes. Will Trump bite? 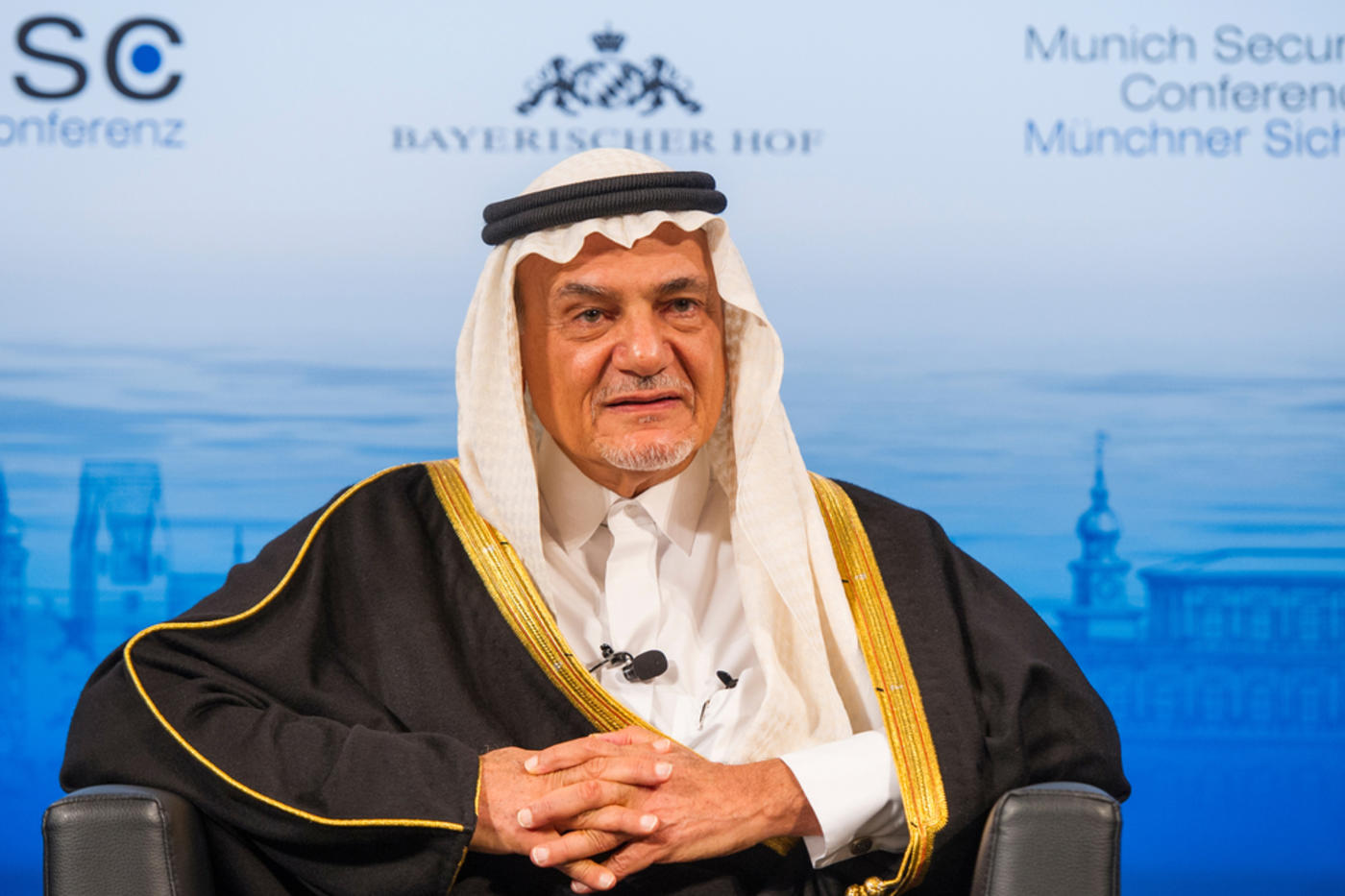 Is it not just within the outer realm of possibility that Prince Turki’s legacy pitch might catch the eye of the president-elect?

For more than 20 years, the prince ran the Saudi intelligence agency Al Mukhabarat before serving ambassadorial stints to the UK and the US.

Speaking as a private citizen and not on behalf of the Saudi government at the London event, Prince Turki observed that the president-elect had “made many contradictory statements” about America’s ongoing role in the Middle East.

“To speculate now on what he will do would be like divining with a crystal ball,” he said with a smile. Still, Trump “has backtracked on some of his most troublesome statements”.

And while it might be far too early for Trump to be thinking of legacy projects, that didn’t stop the prince from constructing one for him, urging him not to tear up the nuclear deal with Iran.

Instead, he said, Trump should use it as a big stick against not just the Iranians but Israel as well. The ultimate goal would be a nuclear-weapons-free zone in the Middle East.

But to rip up the agreement would be to drive Iran to nuclear weapons, and given the Saudi anxiety about what they see as Iranian regional hegemony, would only lead to proliferation.

READ MORE: The devil you don't know: Trump is not all bad news for the Middle East

The prince, wisely, sees Trump as a man who seizes on and promotes simple solutions (that may or may not work) to resolve complex matters. The solution Prince Turki offers is nothing if not elegant in its simplicity. It goes something like this:

President Trump ensures that Iran does not develop its capacity for nuclear weapons. Israel, the Saudis and the rest of the Middle East breathe a sigh of relief.

And then as a sign of good faith, Israel accepts the Saudi-driven Arab Peace Initiative first launched in 2002. Stripped to its bare essentials, it says that the Arab world agrees to normalise relations with Israel in return for its withdrawal to the 1967 borders. The two-state solution brought to final fruition.

And then the Israelis, now at peace with their Arab neighbours, can give up the nuclear weapons they have never officially acknowledged but everyone knows they possess.

“That,” said the prince with a twinkle in his eye “would be a huge legacy for Donald Trump”.

Of course, Turki had just spent the previous few minutes trashing Barack Obama, the outgoing president who wants to claim the Iran deal as his legacy.

“Mr Obama’s presidency raised expectations exultantly and then dashed them cruelly,” he said, noting that having called for the Israelis to cease and desist from settlement building in the West Bank, the president did nothing. “It has turned out, he never really meant to push the Israelis to compromise.”

He was even more scathing when it came to Obama’s handling of the Syrian crisis, suggesting that the president had not acted on the infamous red line of Bashar Assad’s use of chemical weapons because it might snarl the nuclear deal.

“One must declare hats off to his zeal in achieving the agreement; to the extent where even Bashar’s use of chemical weapons went unpunished so that Iran will remain on the negotiating table.”

Having excoriated Obama, the prince touched ever so briefly on UK-Saudi relations as Brexit looms: “(Britain) will find that the Kingdom of Saudi Arabia is a true and steadfast friend.”

That should come as a relief to Theresa May and her band of Brexiteers. Lord knows they need as many friends as they can muster.

Up next was Vision 2030, the economic revolution now underway in Saudi Arabia:

It was a hint, perhaps, that Prince Turki is not one of those who has jumped aboard the Mohammed bin Salman bandwagon

He self-deprecatingly allowed that the plan is not intended for grey beards and “old fogies” like him, but for the 70 percent of the Saudi population under the age of 35 who will generate “the seeds of a renaissance shooting out of the ground”.

Vision 2030 is the brainchild of King Salman’s thirtysomething son, Deputy Crown Prince Mohammed bin Salman. MbS, as he is known, is the most powerful figure in the kingdom but he garnered only passing mention from Prince Turki.

The deputy crown prince, he said, “ensures that if there are mistakes committed, the transparency and accountability written into it ensure that they will be rectified”.

On the other hand, somewhat later in the speech, the crown prince and rival to the throne, Interior Minister Mohammed bin Nayef, was the object of fulsome praise for “chasing al-Qaeda out of Saudi Arabia" and “keeping the kingdom safe from such miscreants”.

It was a hint, perhaps, that Prince Turki is not one of those who has jumped aboard the MbS bandwagon.

NGOs 'muddy the water' on Yemen

Though by far the subject that Prince Turki dwelt on the longest was a spirited defence of the Saudi-led war on the Arab world’s poorest country, Yemen.

He argued that under the auspices of UN Security Council resolution 2216, the Saudis were supporting the legitimate government of Yemen. And what thanks have they received?

“Your media and NGO milieu have muddied the water with so much propaganda and false reporting that in some quarters the kingdom is to blame and not the Houthis and their diabolical ally, the former president (Ali Abdullah Saleh).”

READ MORE: UK ministers in supporting Saudi in Yemen may be liable for war crimes

One of those from the “NGO milieu” that the prince no doubt had in mind was Human Rights Watch. The day after the speech, HRW had the temerity to call for the US to immediately halt all weapons sales to Saudi Arabia.

In doing so, HRW noted the UN’s Office of the High Commissioner for Human Rights report that states the majority of civilians killed and wounded in Yemen, now numbering more than 11,000, was as a result of Saudi-led coalition air strikes. Needless to say, the Saudis have rejected the report.

HRW highlighted two incidents of what it called “apparently unlawful coalition attacks”: the 15 March bombing of a market that killed 97 civilians and the 8 October attack on a funeral service in Sanaa which killed at least 100 people and wounded more than 500. “Both,” HRW said “appear to amount to war crimes”.

Prince Turki, while not alluding to those attacks, had this to say:

“Inevitably, in a conflict of this nature, civilians are victims. The kingdom has scrupulously refrained from harming civilians. When it did happen, it was a mistake that was quickly admitted and compensation for the victims’ families provided.”

The prince argued that the media ignored atrocities by the other side such as the siege of Yemen’s third largest city Taiz: “Have any of you, ladies and gentlemen, seen any reporting of that in the Guardian or the Independent?”

In fact, the Guardian and other outlets have covered the Taiz story quite extensively as have Amnesty International and other NGOs.

Perhaps Prince Turki and Donald Trump could follow each other on Twitter in pursuit of a truly laudable goal: peace in the Middle East

And to be fair to HRW, in their statement they were at pains to note that the Houthis and their allies including forces loyal to the ousted president “have also been implicated in numerous serious violations”.

In my own reporting I have written of how Yemenis are suffering on the ground from Houthi and Saleh attacks while being pummelled from the air by coalition bombing raids.

But to return to the matter of a Trump legacy, in these crazy and precarious times, is it not just within the outer realm of possibility that Prince Turki’s legacy pitch might catch the eye of the president-elect?

For that to happen, however, this senior Saudi royal will have to turn to Twitter. That’s where Donald Trump likes to rant, romp and roam. Perhaps the two could follow each other in pursuit of a truly laudable goal: peace in the Middle East. 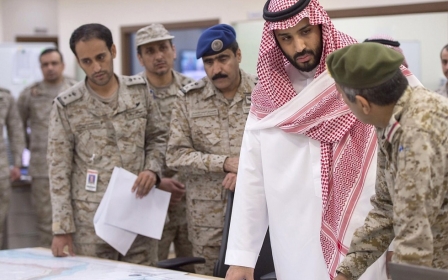