Kristina Kausch
Not even the best governance agreement will hold if regional powers, such as Iran and Turkey, do not stop placing their political bets on Syrian soil What makes Middle Eastern proxy wars so intractable? Think of the conflicts in Syria, Yemen or Libya in terms of a cake with three overlapping layers: local, regional and global.

These three layers, which feed and influence each other, represent the different levels at which conflicts are being escalated, fought and potentially resolved.

Most states’ foreign policies are still typically devised in geographical terms. Foreign affairs ministries and budgets are structured in geographical units, which report to the top but have very little horizontal strategising. Yet, the notion of a clearly discernible geographical space as the epicentre of conflict is losing traction; local conflicts are increasingly infused with regional and global power dynamics.

It is no longer possible to frame the Middle East - or any region - in isolation.

If we imagine Middle Eastern conflicts in terms of a three-layer structure, using the Syria war as an example, the local level is the mother conflict. This layer is essentially about the question of who rules Syria, and under what kind of governmental system. At this domestic level, many countries in the Middle East and North Africa are, to varying degrees, socioeconomic time-bombs.

The time bomb is composed of the explosive combination of youth unemployment, lack of effective service provision, lack of meaningful reforms, bad governance, repression and the fading age of hydrocarbons, upon which many regional authoritarian regimes rely.

To these ingredients, add the long-term costs of the bloodshed in Iraq, Syria, Yemen and Libya. The next popular uprising is clearly only a matter of time.

At the core of this layer is not an interest in Syria, per se, or its people, but a quest for political and economic access to a key regional anchor and transit state

The second layer - the regional one - is about who can gain the biggest influence in Syria, and in the Levant more broadly. At the core of this layer is not an interest in Syria, per se, or its people, but a quest for political and economic access to a key regional anchor and transit state.

The main pillars of Middle Eastern geopolitics condition the game at this level, including the growing weight of ambitious, non-Arab regional powers, such as Iran and Turkey; the polarisation between Iran and an emerging Saudi-Israeli front, and their respective allies; the proxy wars in Syria, Yemen and Libya; and the controversies over divisive regional policy issues, such as the Iranian nuclear deal and the Arab-Israeli conflict.

In this arena, the blurring of boundaries between state and transnationally operating non-state actors as geopolitical players further complicates the picture.

The third layer involves how global politics, which has little or nothing to do with Syria per se, plays out in the Syrian conflict arena. This layer is about leverage as the currency of power in a reshuffling world order.

In the ongoing renegotiation of the rules of global governance and the weight of each player therein, global powers such as Russia and the US play the Syria card to pressure their competitors in other geopolitical arenas.

In this layer, Syria becomes a microcosm for a regional and global power contest. Russia entered Syria in dire need of leverage, when its invasion of Crimea had left it internationally isolated. President Donald Trump’s US is happy to leave the field in Syria to Russia and Iran, even if many in Washington feel the move is precipitate, and stands in contradiction of its declared regional policy of countering Iranian influence.

The layer-cake structure to Middle Eastern conflicts may not be specific to this region. Perhaps it is the new normal for the way in which disputes in geopolitically significant places escalate, by means of foreign involvement, as they get sucked into the sparring exercises of regional and global powers at a moment of historical reshuffling. In the Middle East, this layer constellation may be more pronounced due to the high conflation of regional and global powers’ interests.

The challenge for policymakers is that the three layers are intrinsically linked. Syria will not be pacified without a sustainable answer to the governance question.

But not even the best governance agreement will hold if regional powers, such as Iran and Turkey, do not stop placing their political bets on Syrian soil.

And global powers with leverage over these regional powers, such as Russia and the US, will neither act themselves nor pressure allies into compliance if this does not benefit their larger political agendas, for which Syria is but one (presumably dispensable) item among many.

Kristina Kausch is a Senior Resident Fellow at the German Marshall Fund in Brussels. Join her on Twitter: @kristinakausch 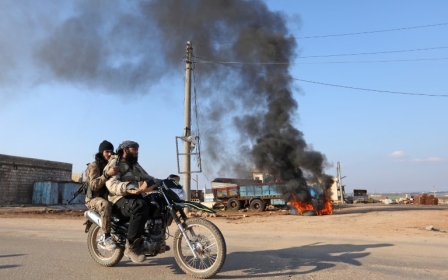