The 'Trojan Horse' affair was about power, politics and racism, not students

Tahir Abbas
With the case's collapse, there is an opportunity to start to redress the damage it has caused. It's time to energise - and organise 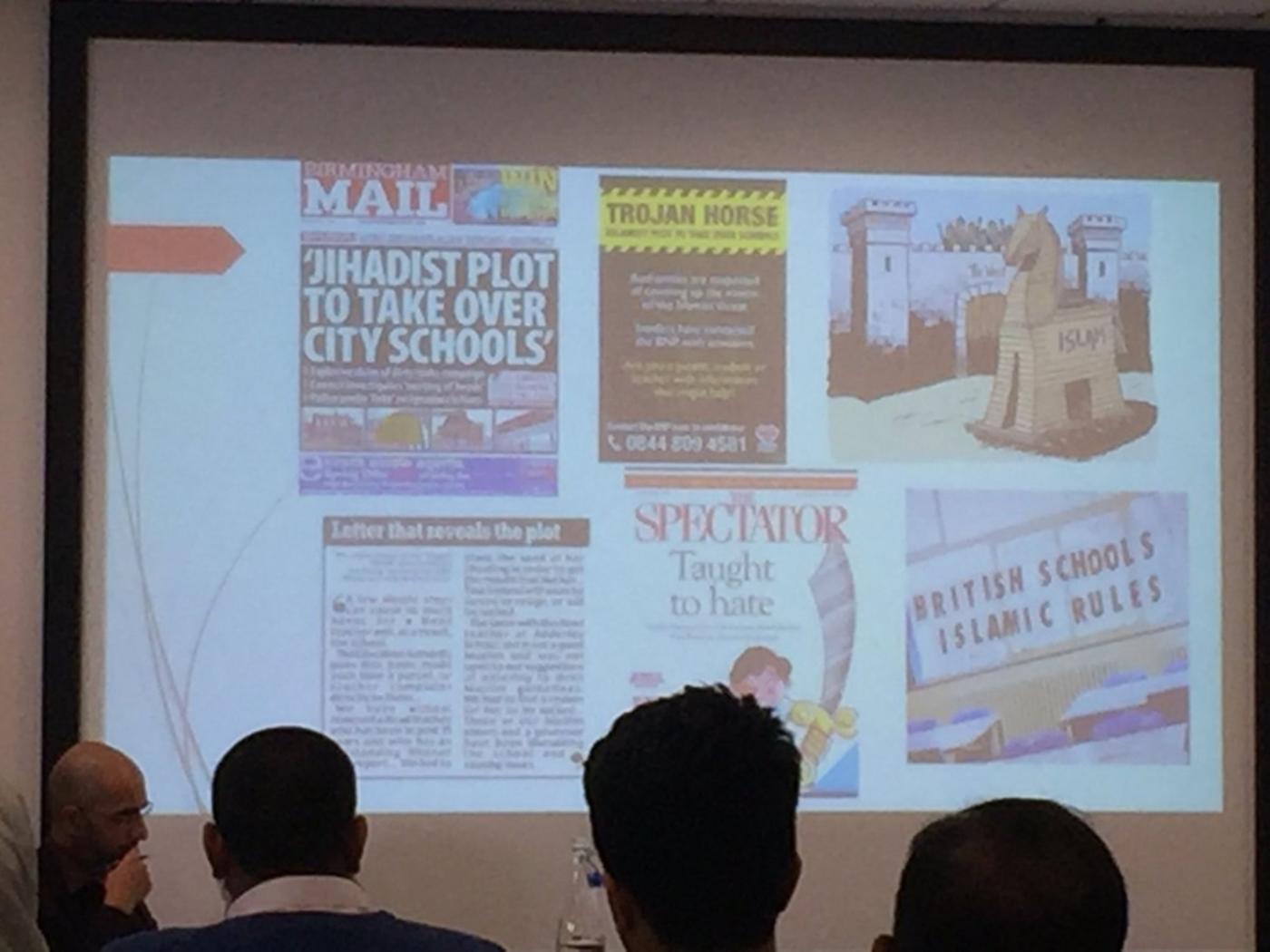 Earlier this week, the cases against five teachers facing a disciplinary panel in relation to their role or otherwise in the so-called 'Trojan Horse' affair to Islamise state secondary schools in the city of Birmingham were dropped.

As The Guardian reported, the cases were dropped because government lawyers withheld valuable evidence – namely, interviews that were provided to Peter Clarke, the Met’s former counter-terrorism police tsar charged by the then secretary of state for education, Michael Gove MP.

Clarke was to investigate the accusation of Islamisation raised by a now infamous letter supposedly exposing the suggested deleterious practices. The provenance of this anonymous letter, however, was never established. It was regarded as prima facie evidence.

This was the first in a catalogue of errors, presumptions and abuse of power at the hands of Gove. His ambitions were to seal his role as the counter-terrorism lead in government but Theresa May MP, who was home secretary at the time, was thwarting him. The outcome of the accusation was the taking over of 21 schools by Ofsted, placing outstanding schools under special measures.

It also provided the fertile ground needed to introduce the Counter-Terrorism and Security Act 2015, ratcheting up the powers of the state in relation to counter-terrorism and deradicalisation. This act introduced the Prevent duty, making it now law for up to 500,000 public sector workers to take the Workshop to Raise Awareness of Prevent (WRAP) training and to implement a form of safeguarding on a grand scale.

Ultimately, it formalised the securitisation of a ‘pre-crime’ space, where groups are policed, regulated and modulated before a crime has been carried out. In the case of ‘Trojan Horse’ schools, teachers were sacked or were pushed out. Pupils were turned into pawns in a redundant political battle that paved the way for greater securitisation.

For nearly three years, these five teachers faced the wrath of lawyers and the investigation team. There were delays upon delays. Now that the case has been thrown out altogether. This sad outcome is indicative of the presumptuous thinking on the part of state elites whose blinkered views on Islamism speak loudly.

Teachers were sacked or were pushed out. Pupils were turned into pawns in a redundant political battle that paved the way for greater securitisation

Gove threw himself into the mix centre stage when the letter turned up on his desk at the Department for Education. Impassioned and emboldened, Gove was thoroughly convinced that his ‘Islamisation’ thesis, elaborately presented in his 2007 book Celsius 7/7, had now come true. Feeling vindicated, he wanted to show authority.

However, he encountered the steely resolve of Theresa May. In end, the battle over this issue was not about young people and their schooling, but about power and politics at the top of government. The victims were the young people and the professionals working in these schools whose lives were turned upside down.

Racism at the heart

The ‘Trojan Horse’ saga, as a case study of Muslim-minority experiences in relation to ethnic and religious identities in Britain, confirms that perceptions of the ‘other’ held by the dominant ‘other’ remain crucial sources of anxiety.

After 70 years of post-war immigration, settlement and adoption, many Muslim-minority communities continue to face racism, prejudice, intolerance, bigotry and discrimination which affect educational outcomes and issues of identity politics. Dominant notions of race and nation thrust the Muslim category into the limelight as the most racialised, objectified and ‘othered’ groups in education.

The city of Birmingham has been a ‘laboratory’ for race and ethnic relations since the 1960s. It should know better

However, adaptation to and incorporation into society has simply not occurred fully as a result of the limitations placed by the workings of wider society in reality. This is not to argue that social and cultural integration is the solution to success, but rather to assert that various external factors are forcing communities apart rather than together.

The ‘Trojan Horse’ affair exposed that schooling in relation to young Muslims remains a sensitive topic. All the while, Muslim communities suffer in the inner-city areas. Habitually neglected, forgotten and ultimately abandoned, especially in the post-9/11 climate, this racialisation focuses on the conservative Muslim, increasingly seen as a security concern.

Originally, the Birmingham local authority was keen to dispel fears over Islamism in Birmingham when the matter entered into the public domain – and this was largely because it wanted to protect the reputation of the city, which continues to come to terms with deindustrialisation as it grows ethnically, religiously and culturally diverse.

Education managers in Birmingham City Council were complicit in overlooking the realities facing young Muslims in education over the years. Decade upon decade of underachievement, in particular for men, inevitably means that some enter into criminality, and even extremism. These schools were mismanaged, with aspirations of young people thwarted.

The ‘Trojan Horse’ schools took the same poor, marginalised young Muslims who have always attended these schools, but did not wish to accept the culture of failure. Pupils in these schools instilled a sense of purpose, helped to resolve pressures on identity and opened up their thinking on Britishness and belonging.

This sounds a bit like Prevent territory – but it is not state-driven. Rather, it is designed, delivered and managed by Muslim groups – and this is what some resisted: it was the fear of Muslim power.

At the heart of this problem is racism. The city of Birmingham has been a ‘laboratory’ for race and ethnic relations since the 1960s. It should know better.

Holding on to 'Britishness' at all costs

The ‘Trojan Horse’ saga has sanctioned a vast array of counter-terrorism practices – including protecting against ‘British values’. The presumption that promoting ‘British values’ will eliminate structural inequalities that appear because of modern racism is nonsensical, dismissive and patronising.

Projected as representing all that is least desired about the self, the irony is that British Muslims, in reality, are more a part of British life than ever

Instead, it reproduces the status quo, recreating the conditions for disadvantage and discrimination. It is an attempt to hold on to the preserve of Britishness in the face of its ongoing disintegration.

The ‘Trojan Horse’ fiasco was a realisation of the extent of this racism, now wholly concentrated on Muslims in Britain through the governmentality of counter-extremism policy frameworks. Projected as representing all that is least desired about the self, the irony is that British Muslims, in reality, are more a part of British life than ever.

The running, management and leadership in these ‘Trojan Horse’ schools placed considerable emphasis on empowering young Muslims to know their religious character, thereby equipping them to appreciate its depth and nuances. It bestowed young people with the courage and wisdom to counter the narratives propounded by the likes of Islamic State. The latter exposes the lack of Islamic awareness among disaffected youth who are subsequently exploited by those who seek to replace the vacuum with a sense of belonging, knowing and self-actualisation thus far denied.
UK army called into 'Trojan horse' school to teach 'British pride'
Read More »

In the context of deep racism, discrimination, inequality and marginalisation facing many British Muslim groups in the inner cities today, an inspired programme of self-awareness in education, coupled with academic scholarship, was a solution that plainly functioned in a climate that sought to present all the problems of society as the problems of Muslims. To be sure, education can be a solution in relation to issues of radicalisation.

In collapse, an opportunity

The ‘Trojan Horse’ affair merely uncovered the fear and loathing of conservative Islam and pious Muslims in sectors of society. These fearmongers have the most power but the least understanding or gumption about the causes of radicalisation beyond the rhetoric that the source is conservative Islam.

In the mid-1980s, the Birmingham education system severely damaged the life chances of ethnic minorities when school closures concentrated deprivation and disadvantage. The 1990s highlighted mismanagement and poor leadership in these same schools. The current generation of young Muslims in inner-city Birmingham are in the exact identical schools and in precise same areas.

The collapse of the case, however, is now an opportunity to begin to redress the damage the affair has caused. All right-minded groups in society, Muslim and non-Muslim, minority or majority, must now use the space opened up by the breakdown of this case to energise and organise themselves. Critically engaged non-violent resistance is not futile.

Photo: A conference on Birmingham's Muslims at the University of Birmingham in October 2016 (Twitter/@aishagani)