Tunisia is under threat from a Gulf-backed coup. Will the world let it happen?

David Hearst
The presence of a peaceful Islamist movement in Tunisia is a thorn in the side of the dictatorships in the Gulf and Egypt, who seek to end the country's fragile experiment with democracy 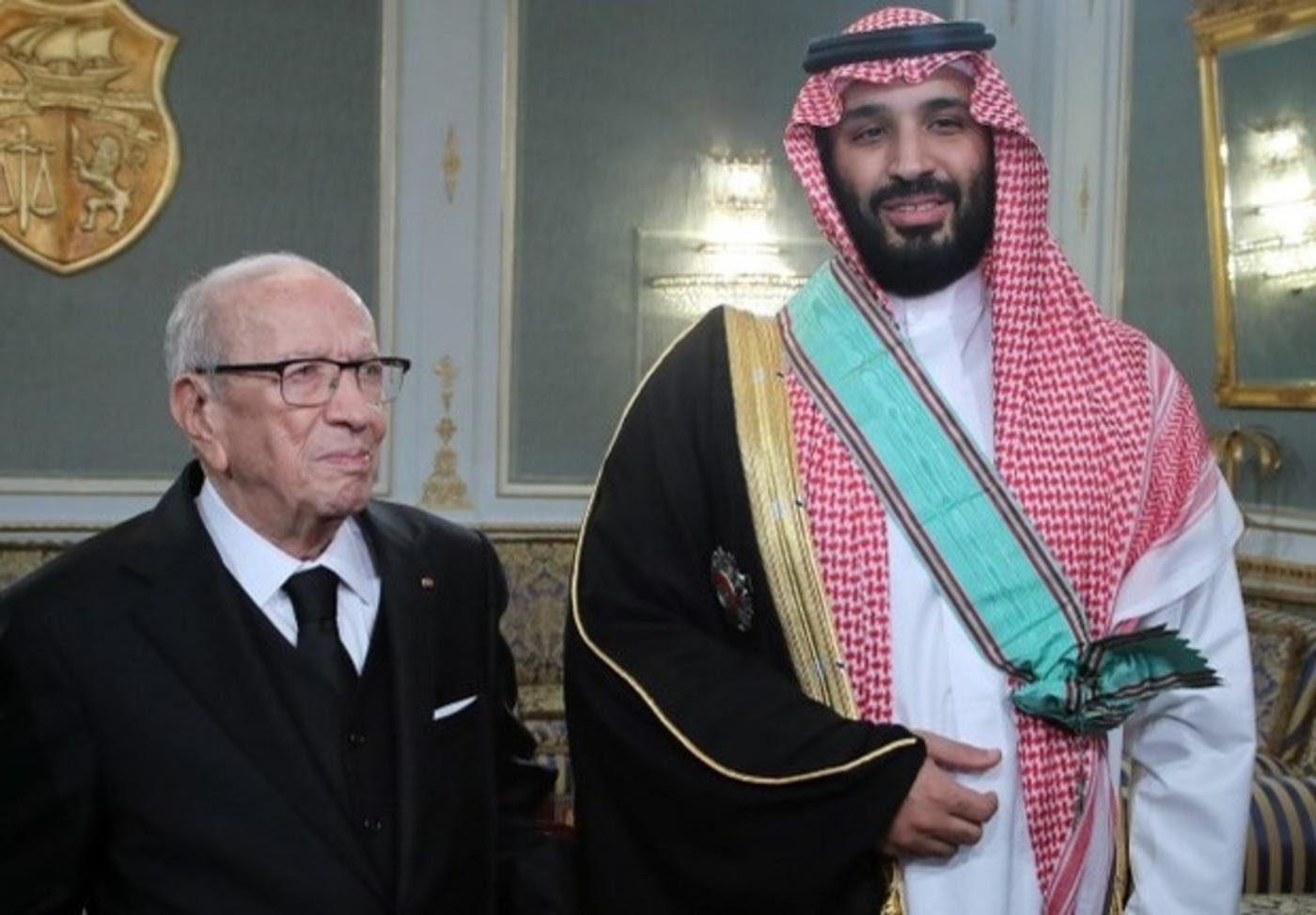 The relationship between Rached Ghannouchi, leader of the Tunisian Ennahda party and the Islamist father of the Arab Spring, and Beji Caid Essebsi, the Tunisian president and an "old wolf" from the days of late president Habib Bourguiba, is about as unlikely as the friendship that blossomed between Martin McGuinness, the former IRA chief of staff, and Ian Paisley, the late leader of the Democratic Unionist Party (DUP) - deadly enemies in war, strange bedfellows in peace.

One man believes in Islam, democracy and revolution. The other is a classic fixer from the ancien regime. His party is a coalition of capitalists, nationalists, and secularists whose only unity comes from their wish to take the Islamists of Ennahda off the map.

Between constitution and power

But for four years, that relationship held. Secretly negotiated in Paris in 2013, their pact diffused a crisis triggered by the assassination of two leftist politicians, Chokri Belaid and Mohamed Brahmi. The Islamists got their constitution and Essebsi got power.

To their credit, Essebsi and the men close to him shunned offers of substantial sums of Saudi and Emirati cash in favour of a pact which brought some measure of political stability to Tunisia.

When Ennahda jettisoned the label of political Islam, announced a separation between mosque and party, and called itself Muslim Democrat, Essebsi praised it as a modern Tunisian party

Consensus had its problems. Ennahda, Tunisia’s second most powerful party after the 2014 elections, was nominally - at least - part of the government, so an effective opposition disappeared.

Both Nidaa Tounes and Ennahda supported a securitised approach to counter-terrorism and the classic IMF theology, which kept the state on life support but did little else. There were violent protests last January and the Tunisian General Labour Union has called for a nationwide strike to be held on 17 January 2019.

When Ennahda jettisoned the label of political Islam, announced a separation between mosque and party, and called itself Muslim Democrat, Essebsi praised it as a modern Tunisian party. This was not an uncontested move by the leadership of Ennahda. Ghannouchi was criticised for compromising his movement and the revolution out of existence.

However, the old wolf in Essebsi never disappeared. Worried, as all 92-year-old presidents are, by their succession, he pushed his politically inadequate son, Hafedh Caid Essebsi, to the fore as his heir. The wish to create a dynasty provoked one split after another in his own party. The first to go was Mohsen Marzouk, Nidaa’s secretary-general who formed his own party "Mashrou Tounes".

The schisms whittled away Nidaa’s majority in parliament, making Ennahda, which came second in the 2014 elections with 69 seats out of a total 217 seats, the largest party. Nearly half of Nidaa’s 86 MPs have defected since then. Further tension was created when, to defuse another political crisis, Nidaa Tounes appointed an inexperienced technocrat, Youssef Chahed, as prime minister.

At odds with each other were two fundamentally different ways of exercising power. The first goes like this: whoever the prime minister is, he is the coffee boy of the president. Hafedh Essbesi expressed that quite clearly in a leaked recording of comments he made to a party meeting in 2017: "We have not put [Chahed] in this position so that he could appoint collaborators that we do not know or that he [could] treat ministers from Nidaa Tounes in such a way," Hafedh said.

The second goes like this: things have changed after seven years since the revolution that overthrew Zine El Abidine Ben Ali. There is now a constitution that guarantees a separation of powers and gives almost all executive power to the prime minister.

The president is a figurehead. The power struggle between Hafedh and Chahed grew. Essebsi wanted to kick Chahed out, but he refused to resign and managed to get enough MPs in parliament - 43 so far - to leave the party with him. Chahed's National Alliance has become the second largest bloc in parliament.

The civil war inside Nidaa Tounes forced Ennahda to choose sides. In seeking Ennahda’s backing for the ouster of his own prime minister, Essebsi refused to give the party an alternative candidate. A faction in Ennahda wanted to stay with Essebsi. The majority in the party’s shura, however, thought that if they stood with Essebsi and his son, the government would be even weaker.

Essebsi and Ennahda parted company - Essebsi declared the alliance dead days after suspending Chahed’s membership of Nidaa Tounes - then a series of legal suits were launched. Belaid and Brahmi’s lawyers claimed the existence of a “black room” - a shady security organisation run by, or on behalf of, Ennahda to destroy the evidence of their alleged involvement in both political murders, a claim which Ennahda flatly denied.

A government security council meeting, held to examine this alleged dossier - which misspelt the names of Ennahda members, and also alleged that Essebsi was an agent of the Italian secret services - threw the allegations out.

Separately, Nidaa Tounes' Secretary-General Salim Riyahi, who arranged the Paris meetings between Essebsi and Ghannouchi, launched a case in the military tribunal of Tunis alleging that Chahed had plotted to stage a coup against the president. This, too, was rejected by the court on Thursday.

There is a temptation in all of this to say "a plague on both your houses", to cast Nidaa Tounes and Ennahda as equals jousting for power, oblivious to the lives of ordinary Tunisians for whom nothing has changed.

Some analysts have claimed the current crisis is a good thing as the pact between secularists and Islamists deprived Tunisians of a powerful opposition and that the majority of Tunisians felt represented by neither of them.

There are some flaws in this arguments. First, Nidaa Tounes and Ennahda are not on an equal footing. One block, Nidaa Tounes, has money and power from the old establishment. The other is largely made up of the middle and lower classes and is trying to establish a democracy.

If anything, the criticism of Ennahda is that they have compromised too much by trading power for stability.

Should Ennahda lose this fight, its banning is as much a possibility in Tunisia as was the case with the Muslim Brotherhood movement in Egypt, Saudi Arabia and the UAE

The threat to their existence has never gone away, and should Ennahda lose this fight, its banning is as much a possibility in Tunisia as was the case with the Muslim Brotherhood movement in Egypt, Saudi Arabia and the UAE.

The other flaw in this argument is that it is oblivious to the fact Tunisia is the last man standing. It is the only country where the Arab Spring survived to give birth to a flawed, but democratic transition. In so doing, Ennahda is the only Tunisian political party that has kept its cohesion and broadly its support.

The Tunisian local elections held earlier this year put Ennahda well ahead of Nidaa Tounes. The latest opinion poll gives Ennahda 36.1 per cent and Nidaa Tounes 29.8 per cent. It also shows that in a presidential election Chahed is more popular that Essebsi.

A thorn in the side of dictatorships

The presence of a peaceful Islamist movement with proven political skills in Tunisia is a thorn in the side of the dictatorships in the Gulf and Egypt, who have strained every sinew to end Tunisia’s fragile experiment with democracy.

Essebsi rejected their advances four years ago, but he is not now. Egyptian billionaire Naguib Sawiris visited Essebsi on 19 November at the Carthage palace "to develop partnerships with a number of Tunisian institutions”. The visit triggered the anger of activists who referred to him as “the Godfather of the Egyptian coup”.

Then the Saudi Crown Prince Mohammed bin Salman arrived. Despite widespread protests, with the Tunisian media describing the visit as an affront to their democracy after the murder of Jamal Khashoggi, Essebsi described Bin Salman as his "son", heaped praise on the royal family and reaffirmed the “special relationship” between the two countries.

The visit affronted secular leftists as well as conservative Islamists. The former Tunisian president Moncef Marzouki accused Essebsi of "demanding political corruption money” from the Emirati and Saudi camp. He said the president was making “grave mistakes by levelling absurd accusations against Ennahda". And this is a man who felt betrayed when Ennahda ditched him in favour of Essebsi.

After bin Salman left, three of his special advisers stayed behind. Other heavy guns are being wheeled into place. One comes in the form of the new Emirati ambassador to Tunisia, Rashid Mohammed Al Mansouri.

Mansouri played a key role in persuading Iraqi Kurdish leader Massoud Barzani that if he went for his doomed referendum on independence, Kurdistan would be backed by Gulf money. Barzani's son, Masrour, the head of the National Security Council, made a secret visit to Abu Dhabi just one month before the 25 September referendum.

None of this is good news. We know what to expect. There could be more unrest and more political assassinations, whose provenance is uncertain but for which Ennahda will be blamed. Tunisia’s fragile experiment with democracy could still prove to be time-limited.

I have long since stopped expecting Western politicians to wake up to the consequences of their deals with despots. Ennahda is confident that Tunisia in 2018 is a different place. We will see if that confidence is justified.

Next year there are parliamentary and presidential elections. The dominance of both Ennahda and Prime Minister Chahed in the polls will only spur Essebsi and his newfound allies in Saudi Arabia and the UAE to attempt to change the result.

Will the parliament-dominated world of Europe sit on the sidelines and watch them subvert the parliament in Tunisia? Will the world stand by again in silence and let the Gulf despots stage another coup, another intervention?

Tunisia is a small country. It asks big questions.

Photo: Tunisian President Beji Caid Essebsi (L) poses for a picture with Saudi Arabia's Crown Prince Mohammed bin Salman (R) upon the latter's arrival at the presidential palace in Carthage on the eastern outskirts of the capital Tunis on 27 November 2018 (AFP) 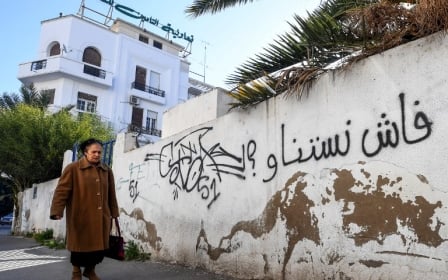 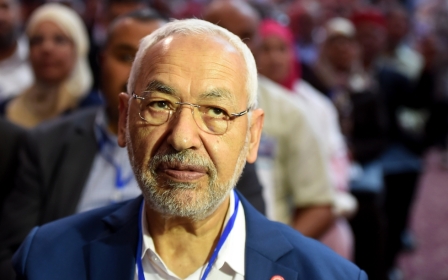