US election: Biden-Harris ticket is a win for Israel

Nada Elia
But while the establishment ignores the Palestinian cause, change continues to percolate on the streets Her selection was fully predictable, and could not have come as a surprise to anyone. Nevertheless, the official announcement by presumptive Democratic presidential candidate Joe Biden that Senator Kamala Harris would be his running mate launched a flood of commentary, much of it highly critical.

US President Donald Trump, also predictably, described her as “extraordinarily nasty,” a term he had also favoured against Hillary Clinton.

Grassroots activists who have been protesting against law enforcement violence and a lack of police accountability referred to the Biden-Harris team as the “Blue Lives Matter ticket,” an expression that indicates support for police over people. The Black Agenda Report wrote that Harris has a “distinguished career of serving injustice”.

It is not fair, but in a political environment where identity is frequently, and erroneously, conflated with politics, most of us tend to be more harshly critical of women of colour for the same faults as those committed by white men. I have no doubt this is happening with Harris.

Yet, even though her identity as a biracial, Black-Asian woman should be recognised for its political symbolism - rather than as an indication of ideology - it absolutely matters. In a country subsumed by white supremacy, having a woman of colour as vice president is important.

Harris fondly recalls that as a young child growing up in the Bay Area, she never sold Girl Scout cookies, but instead collected donations for the Jewish National Fund

And while Harris is being subjected to the kind of scrutiny that a white male politician in the same circumstances would not undergo, I maintain that, based on her record, she is highly problematic. I resent her projecting herself, or her being presented, as progressive.

Looking at the question of Palestine, Harris is staunchly pro-Zionist. She recently stated in a letter to Trump: “My support for Israel’s security and the ten-year $38 billion Memorandum of Understanding (MOU) is unwavering.”

Some politicians just repeat the platitudes they were given - the ones they know will not ruffle the feathers of major funders and the political establishment: “Israel is a democracy,” our “strategic ally” with whom we have so many “shared values”. Then there are those politicians who do not just repeat the platitudes, but actually embellish upon them with their own personal experience.

They’ll tell us they’ve been to Israel, felt the magic of the embattled startup country, and been personally touched by the many stories of Israeli families who lost loved ones in the Holocaust, and then, decades later, in the country that should have been their refuge.

Their sympathies are firmly with the settlers. They ask us, self-righteously: “What would you do if you lived in Sderot?” But they don’t once consider that, before the town became known as Sderot, it was the Palestinian village of Najd, which was depopulated during the Nakba. No US politician has ever asked us to ponder what we would do if we were from Najd.

Harris is in the latter category. She fondly recalls that as a young child growing up in the Bay Area she never sold Girl Scout cookies, but instead collected donations for the Jewish National Fund, which seeks to expel Palestinians from their homes. To Harris, Israel is not just an ally, but “one of the best friends we could possibly have”.

In 2019, as many Democrats were vying for their party’s presidential nomination, they were asked pointed questions about Israel during the debates. Harris stood out as one of the most pro-Zionist candidates. On the US spectrum, where the American Israel Public Affairs Committee (AIPAC) is very “hawkish Zionist” and J Street claims to be progressive-liberal Zionist, Harris is certainly “more AIPAC than J Street”.

Palestine is obviously not the only issue of huge import in today’s politics, but it is emblematic of many issues that progressive communities rally around, from police militarisation, to mass incarceration, to protest rights, to equality and much more.

As such, progressives are not celebrating Harris’s nomination - because even though she is a woman of colour and a daughter of immigrants, her nomination does not represent real progress. In the era of Black Lives Matter, she is a proud top cop.

But progressives are celebrating other significant political developments that coincided with Biden’s announcement of his running mate. In a race that was all about Israel, Representative Ilhan Omar this week defeated a challenger in Minnesota who had the backing and funding of the Israel lobby.

Michigan’s Rashida Tlaib also sailed to a primary win, as did New York’s Alexandria Ocasio-Cortez, and Boston’s Ayanna Pressley is running unopposed next month - proving that the “Squad” is untouchable.

In the Bronx, newcomer Jamaal Bowman defeated Eliot Engel, the pro-Israel chair of the House Foreign Affairs Committee. In Missouri, Cori Bush upset William Lacy Clay, a longtime incumbent who had accused his challenger of supporting BDS - the Palestinian-led Boycott, Divestment, Sanctions movement - something Bush fully embraced, rather than denied.

Across the country, in local races, establishment Democrats are being ousted by progressives whose first political experiences were not in conference halls but in the streets, avoiding tear gas and police batons.

But the bottom line is, with Harris as vice president, Israel is winning the establishment yet again - an establishment that has never concerned itself with our issues. Israel won that battle earlier in the 2020 presidential race, when Biden pushed Bernie Sanders out of the Democratic running.

Israel, however, is losing the street, where change continues to percolate.

So we will keep taking to the streets. Radical change does not come from above, but from the roots. Change is happening everywhere at the local level. That lurch towards radical transformation will push smart politicians towards more progressive stances, not just on Palestine, but on all the related issues that Palestine symbolises.

Or it will eventually push them out, as we see happening across the country at the local level, where it matters. 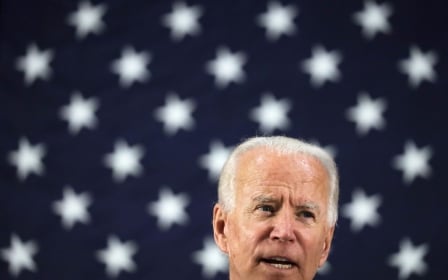