Madawi al-Rasheed
If Mohammed bin Salman's former aide was poisoned to death, what does it say about the crown prince and Jamal Khashoggi? 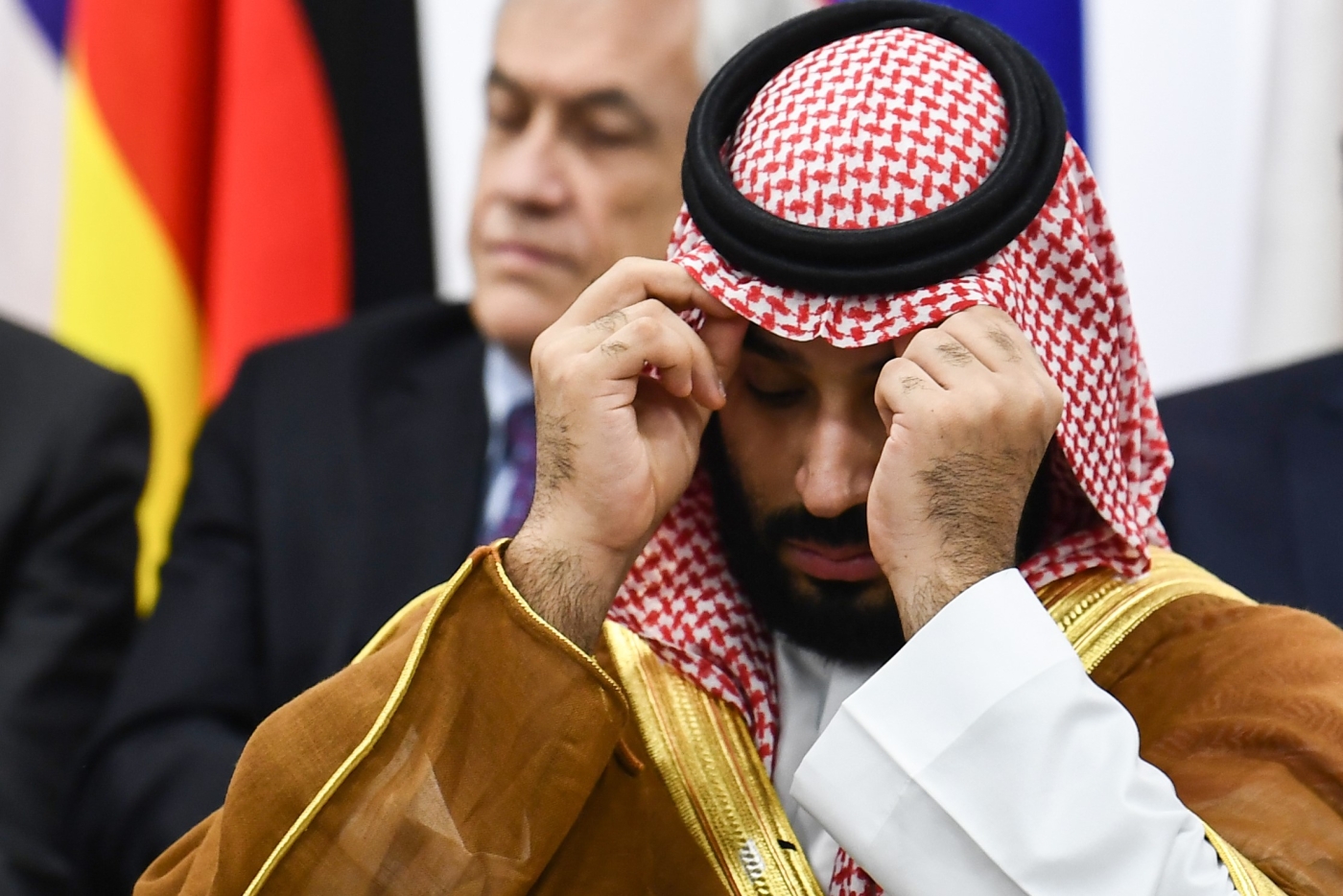 The disappearance of Saud al-Qahtani, an important aide of Saudi Crown Prince Mohammed bin Salman and a man reportedly involved in the murder of Saudi journalist Jamal Khashoggi in Istanbul 11 months ago, is still a mystery.

Since Qahtani was sacked following the murder, he is yet to appear in public or post on social media, as he once always did.

On 28 August, Oslo-based Palestinian exile and critic of the Saudi regime, Iyad al-Baghdadi, tweeted that he "received news that Saud Al Qahtani (SQ) had been poisoned to death by Mohammed bin Salman. The source is well placed and has been consistently reliable for nearly a year. I cannot publicly reveal anything else about this source".

A couple of months ago, Norwegian intelligence services put Baghdadi himself under protection after the CIA sent warnings that his life might be in danger, as he may be targeted by agents of the Saudi regime.

While dictators are notorious for killing their critics and dissidents, they are equally known to have eliminated those closest to them

Baghdadi’s Twitter thread on Qahtani's poisoning is yet to be officially backed up by a third party, but neither Qahtani nor the Saudi regime has issued a statement confirming his continued existence or acknowledging his death.

While dictators are notorious for killing their critics and dissidents, they are equally fond of killing those closest to them, especially when they might have helped rid them of a persistant critic. It is only natural for unaccountable regimes to murder their aides, who might reveal their intrigues and thuggery. They become scapegoats to save bigger heads from greater scrutiny and responsibility.

It's been over 24 hours since I tweeted this, about Saud Al Qahtani's fate. Many fine journalists have been on it since. There's been no official confirmation, but perhaps more importantly for me, no refutation either. At this point I'm choosing to post a thread with what I know: https://t.co/EJ0xNHpDjO

In the absence of hard evidence that Qahtani is still alive or in hiding, we cannot assume that Baghdadi’s statement is fabrication beyond the realm of the possible.

MBS has a number of reasons to make Qahtani vanish from the face of the Earth, as his name has been closely associated not only with Khashoggi's scandalous murder but other equally abhorrent intrigues.

Qahtani was sacked from his multiple jobs in the regime bureaucracy and, since Khashoggi's murder, he has failed to make an appearance on social media, the space where he was most active.

Qahtani was named as one of the masterminds of the Istanbul murder by several reports, amongst them the UN investigation led by human rights expert Agnes Callamard in June 2019. He was one of the first named persons to be banned from entry to the US, Britain and other European countries.

The hawkish crown prince is still determined to silence all critics, encourage ultra-nationalistic rhetoric and create death squads whose role has become prominent in spreading fear inside Saudi Arabia. His death squad plotted and carried out murder, hacking and intimidation of critics inside and outside the country in the name of protecting and defending the nation. Qahtani was one of the officers named in the murder case but remained in Riyadh after the scandal and remained in contact with MBS.

Like Mohammed bin Salman, Qahtani was a graduate of King Saud University, where he studied law. After a short career as a law lecturer at a Saudi Arabian security college, Qahtani was brought into government by Khalid al-Tuwaijri, a senior aide of King Abdullah. He was then sidelined, and became resentful.

In autumn 2017, Qahtani's name was associated with the Ritz Carlton incident, when Mohammed bin Salman detained several senior princes and elite businessmen under an alleged anti-corruption campaign. Several sons of King Abdullah, for example Miteib and others, were humiliated and detained for several months. Perhaps Qahtani was waiting to strike back and take revenge for his own humiliation during King Abdullah’s reign.

But since 2012 it was reported that he contacted the Italian spyware vendor Hacking Team to enlist its services for the regime. Since he was brought back by the Saudi crown prince, he was reported to have initiated contact with the Israeli cyber intelligence company NSO, which manufactures spyware.

In 2017, Qahtani's name was also mentioned in the context of holding Lebanese Prime Minister Saad Hariri in Riyadh and coercing him to read a prepared resignation letter, hoping to precipitate a political crisis in Lebanon and undermine Iranian-backed Hezbollah’s control over the country.

Qahtani’s thuggery was symptomatic of the character of the regime as a whole under Mohammed bin Salman. In 2018, relatives of Lujain al-Huthloul reported him as responsible for sexual and physical violence inflicted on the women's rights activist, who has been detained since May 2018.

But the climax of his criminality was fully exposed only after Khashoggi's murder.

Qahtani’s aggressive statements on social media prompted many dissidents and critics of the regime to name him Mr Hashtag. He was dubbed the founder of the "army of electronic flies", a team of cyber attackers and intimidators.

Qahtani always claimed that he wanted to rid the country of traitors and enemies of the state. On one occasion, deploying populist language for authoritarian ends, he tweeted that the "people should assist the government in drawing a black list of those traitors who criticise it and tarnish its reputation". Khashoggi was obviously on that list.

We still need to ask MBS and his brother the deputy defense minister (who advised #JamalKhashoggi to seek needed docs from Istanbul consulate): what did you do w his body? And now we shld also ask, have you done something to #Qahtani too? Sordid lot... https://t.co/8pmzylV4Wq

Eventually, he promised to eliminate those whose names appear on this black list. He was the promoter of the "citizen informer" and "citizen policeman", as he demanded that all Saudis should be enlisted in defending the nation in multiple ways.

Adding names of critics and dissidents abroad to the black list was one of them. Qahtani was building a data bank in which names of random people and critics of the regime are listed, with possible plans to eliminate them.

Qahtani was responsible for controlling the image of Saudi Arabia under the new leadership as a progressive, liberal and prosperous country. For this purpose, he sought the expertise of several Western public relations companies. He was named by US intelligence services as the ring leader of the death squad that eliminated Khashoggi at the consulate.

But Qahtani always reiterated that he was merely serving his masters, the Custodian of the Two Holy Mosques, King Salman and his royal highness the crown prince. He also always thanked them for the trust they invested in him, signing his statement as their loyal servant. He regularly reminded his Twitter followers that he always received his orders from the crown prince.

Under the new thuggery that poses as sincere nationalism, the charge that a detained person has maintained contacts or communication with foreign agents or governments is now common in Saudi Arabia. Dissidents criticising the kingdom from abroad are accused of treason or of undermining the bright new nation. Talking to foreign media without authorisation is a crime that can lead to prison. Qahtani and his team of cyber trolls always contrast the khains (traitors), with the real watanis (nationalists like themselves). Detained women activists were also dubbed traitors who undermine the nation.

If it is proven that Qahtani was poisoned, more questions will be asked about Mohammed bin Salman's role in Jamal Khashoggi's murder. The poisoning of a close aide is simply like the disappearance of Khashoggi’s body after the murder.

The intrigues of Mohammed bin Salman may be endless but there remains one important fact. The man at the top of the Saudi hierarchy, who is destined to become the future king and who has blood on his hands, remains accused of heinous crimes and may never prove his innocence.