Years of Tunisian protests converge into one demand: Economic justice

Fadil Aliriza
They started under different banners and hashtags. Now protests meld in a broader push to redefine who controls Tunisia's economy 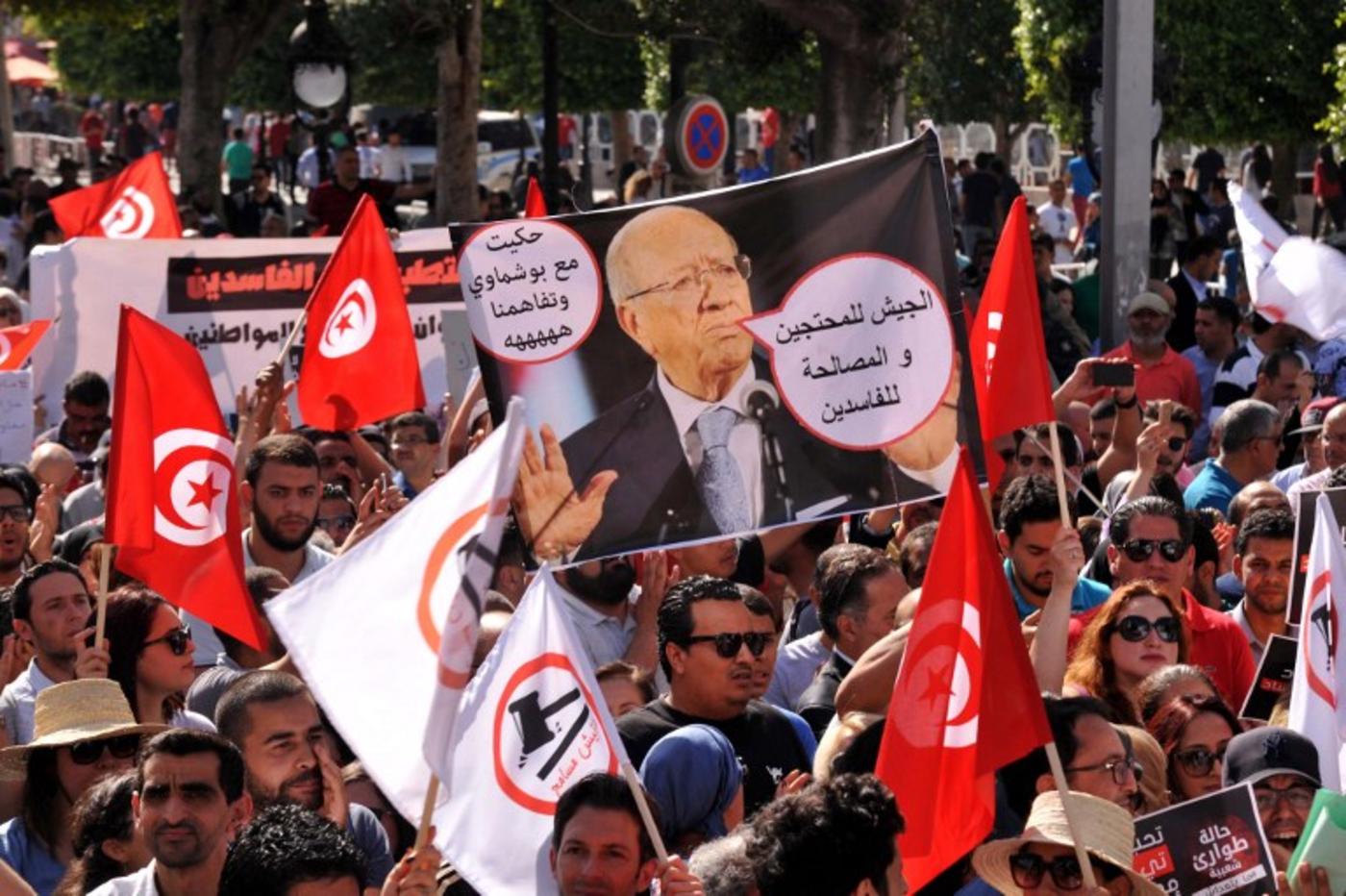 This April, 1,441 different protests occurred across Tunisia according to the Tunisian Forum for Economic and Social Rights (FTDES).

These are massive numbers, unseen since January 2016, when protests in Kasserine spread across the country and were only diminished by a national curfew and promises of populist economic measures.

The same grievances of the governed have not only been ignored by successive governments, but made worse by them

This time, the president has responded by deploying the army to the south, ostensibly to protect the country’s resources, while major political leaders and media outlets are attacking and attempting to discredit protests in the capital over a corruption-amnesty bill.

But the many protests over diverse issues in recent weeks appear to be coalescing around the single issue of economic justice, and the regime’s response in activating the state’s forces to defend the interests of the few is only helping to unite opposition movements.

It’s key to remember that there has been a steady hum of protests in Tunisia at least since 2008, culminating in the 2011 mass uprising, but continuing and even growing since then.

While there are many specific triggers, there is one big-picture trend that can be mapped onto this social unrest: the same grievances of the population have not only been ignored by successive governments, but made worse by them.

These include regional inequalities, stalled public development, and corruption, all of which have facilitated the accelerating rot of vital public services such as healthcare, education, affordable and accessible water, electricity, and housing.

At the same time, the widely detested in-laws of former president Zine el-Abidine Ben Ali are back and apparently prospering economically.

Against this backdrop, April and May have seen protests in the south near Tataouine become a flashpoint of what is essentially an escalating, bottom-up demand for a new social contract.

About 100 kilometres southwest of Tataouine, a protest camp has been set up in Al Kamour, threatening to block the transport of hydrocarbon resources extracted from their region unless their demands of a greater share of the riches - through employment and state development - are met.

Some companies have taken precautions by moving staff or pausing production. When Prime Minister Youssef Chahed visited Tataouine in late April ostensibly to try to restore trust between protesters and the government, he was booed by chants of “dégage! ("get out of here"), a pivotal slogan of the 2011 uprising.

During his visit, Chahed made a set of regional development promises and his government offered 150 immediate jobs in the petrol sector, 350 more jobs over three months, and 30m dinars ($12m) for a state programme.

But locals rejected the offers, complaining that, though their region is rich in resources, none of this wealth has been invested in basic local infrastructure needs for decades.

Two weeks later, protesters countered the government’s offer with a list of demands for 1,500 jobs in the petrol sector, 3,000 jobs in environment and park projects, and a 100m-dinar regional development fund.

But it’s hard for protesters to negotiate with the state over the petrol sector because the sector is largely privatised with only some joint projects between private companies and the state petrol company.

And so more radical demands on the fringes are also getting louder: demands for the state to renegotiate new contracts with foreign companies under better terms.

These demands were amplified recently when, in the midst of a massive 13 May protest against the government’s corruption-amnesty reconciliation law, some of the thousands of protesters also began chants supporting Tataouine protesters and some even called for the nationalisation of resources.

While natural resource governance and the reconciliation law protests were initially entirely separate social movements, they seem to be converging.

While natural resource governance and the reconciliation law protests were initially entirely separate social movements, they seem to be converging

The history of protest over natural resource governance began when Tunisia’s audit court found in 2012 that the state has not been properly conducting oversight of foreign concessions in the hydrocarbon sector, and that on at least one occasion, the state bizarrely ceded its right to a share of a lucrative production site, prompting many to call foul on what they see as corruption.

Focus on the state’s perceived mismanagement of natural resources has grown since then, with spontaneous protests in 2015 under the “Winou el Pétrole?”, literally “Where is the oil?” banner, demanding transparency in the state’s energy policy.

Current demonstrations in Tataouine are building on this movement, as well as on a protest movement in Kerkenna in late summer 2016 that blocked production from a foreign oil and gas company while demanding a greater share of wealth from local resources.

And so when President Beji Caid Essebsi ordered the deployment of the army on 10 May in a long-anticipated nationally televised address, it was met with protest by some officers in the military who posted photos of their stars and army symbols with messages noting their job was not to protect foreign hydrocarbon companies.

The state’s handling of this economic-crisis-turned-political-crisis has exacerbated tensions. The president’s announcement of the deployment of the army either risks withering the authority of the presidency and more broadly civilian control over the military, or it risks pitting the army against protesters, both extremely dangerous scenarios.

Meanwhile, the state’s economic policies have been dictated largely by IMF loan conditions that value macroeconomic performance in terms of GDP and reducing the budget deficit, prompting unpopular austerity measures.

These macroeconomic indicators are poor weathervanes for Tunisia’s main economic challenges, namely regional inequality and corruption, and so breed bad policy. Many also blame the IMF, despite its rhetoric suggesting the opposite, for the largely unpopular, sharp devaluation of the dinar last month.

A hashtag vs a zombie

Despite the need for a proactive economic policy, the president has only presented one piece of legislation to parliament, and it is a bill that has died twice as a result of popular protest since it was proposed in 2015 and again in 2016.

It is the same “reconciliation” legislation that was the focus of protests in the capital last week after it was revived for a third time last month, a zombie bill coming back yet again.

The bill was initially written to explicitly pardon those linked to the misappropriation of state funds but, since a hashtag movement called Manich Msamah (“I do not forgive”) has risen to oppose the bill, lawmakers have kept the legislative details quiet.

When the adversarial blogging website Nawaat published leaked details about the government’s media strategy for promoting the bill in April, the website's co-founder was summoned by authorities, interrogated and harassed for six hours when he refused to disclose his sources.

Opponents of the bill see it as being against the goals of the revolution, especially transitional justice, and argue that it undermines accountability and legalises corruption.

They also interpret it as a way for the current governing parties to repay campaign financiers, thus far merely an allegation.

Proponents say it will revive the economy by having the state recuperate a yet unspecified amount of money that was lost to corruption while signalling a positive investment environment for businessmen who fear legal prosecution for past misdeeds.

Many have rebutted the argument that the bill will jump-start the economy and the central bank governor even admitted at a 9 September 2015 press conference that the government has no idea how much money it will get from the law.

The massive recent protest of at least 5,000 (though official state figures downplayed turnout at 1,200) in central Tunis attracted a diverse array of political parties and legislators from the opposition, as well as the Tunisian Human Rights League (LTDH). The driving force behind the protest were young activists, especially leaders from the hashtag Manich Msamah movement.

Most importantly, protesters not only condemned the bill, but also chanted slogans in support of protesters in Tataouine and some even called for the nationalisation of resources. A Manich Msamah organiser, in a recent interview, said the law would forgive those who had a “stranglehold” over the economy.

What began as opposition to a piece of legislation may be transforming and melding with other social protest currents, growing into a movement not only resisting corruption and cronyism, but also promoting a broader political project that seeks to redefine who controls Tunisia's economy.

- Fadil Aliriza is an independent researcher and journalist and a student of politics currently based in Tunis. Follow him on Twitter @fadilaliriza

Photo: Tunisians take part in a demonstration against corruption on 13 May 2017 in the capital Tunis, against a bill that would allow officials being prosecuted for alleged corruption to be amnestied in exchange for reimbursing embezzled funds (AFP). 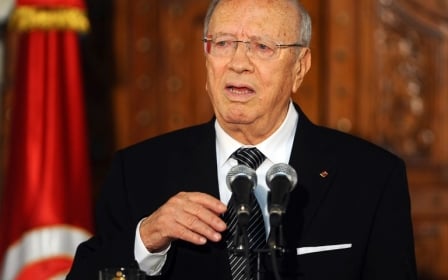