Stolen treasure: How Iraq is hunting for ancient relics looted from its museums 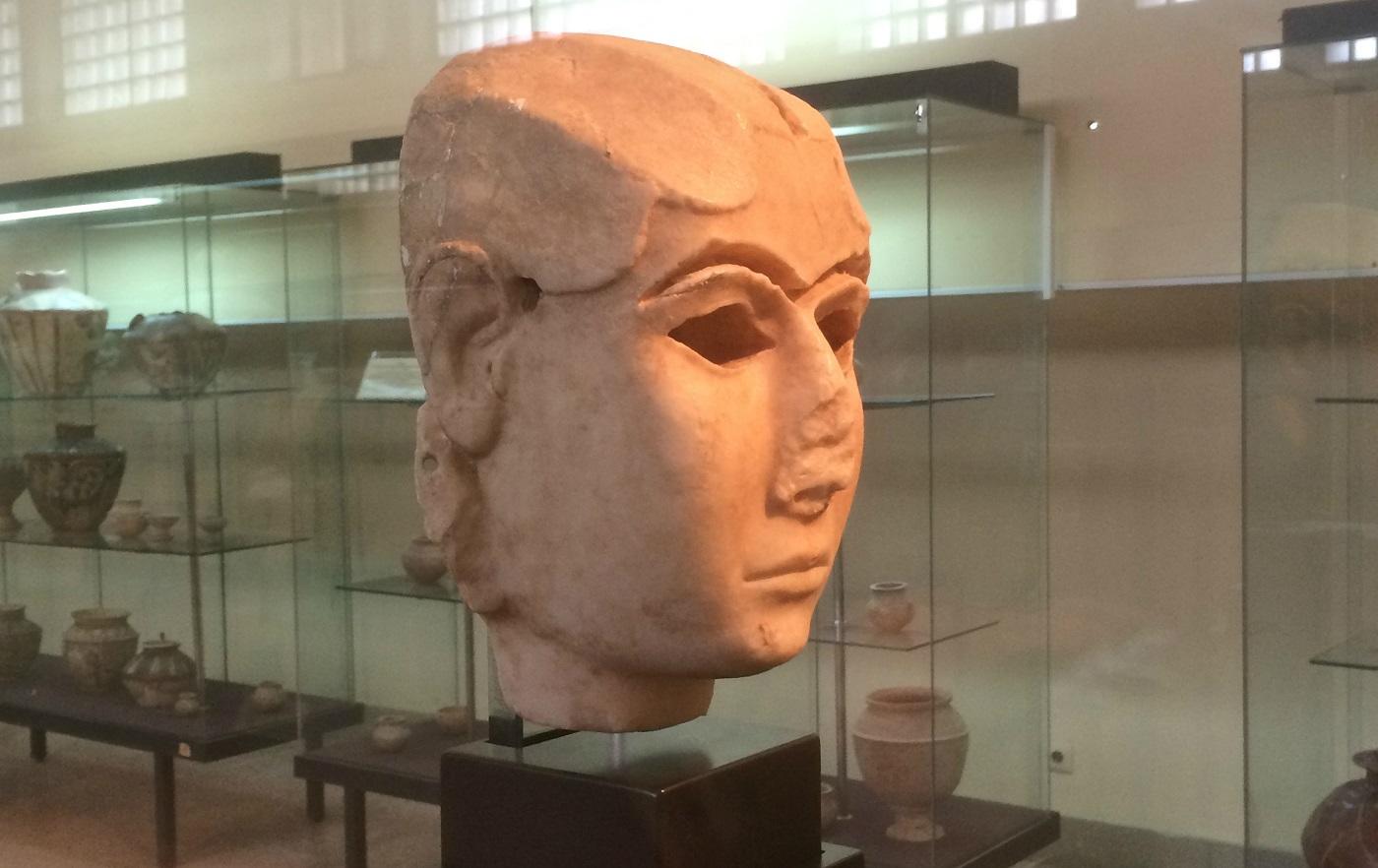 A Sumerian era woman's head dating from 3,000 - 2,900BC, returned to Iraq by the US after it was looted (MEE/Tom Westcott)
By
Tom Westcott
in
Mosul, Iraq

Islamic State fighters damaged and looted some of Iraq’s most important historic sites when they seized swathes of the country in 2014.

Luma Yass, director general of Iraq’s National Museum in Baghdad, dismisses it as largely a publicity stunt, intended to distract from the group’s larger plans: profiting from selling artefacts on the black market.

“IS propaganda made people think they had destroyed the antiquities,” she says, “but actually it was just very short video footage showing them destroying a few pieces, some of which were fakes.

“After this public destruction, IS could freely loot, using the proceeds to fund their terrorist activities.”

Notably, Yass said no fragments of the heads of Lamassu, the Assyrian-era giant winged bulls highly-prized in the antiquities trade, were found in the ruins of Mosul Museum or at the nearby site of the Assyrian city of Nimrud, parts of which date back more than 3,000 years.

“Islamic State couldn’t move whole Lamassu because they were too heavy. But the heads could be removed and sold on the black market.”

Devastation at Nimrud and Mosul

Nimrud is 20 miles from Mosul, the caliphate's “capital” and one of Iraq’s best-preserved Assyrian sites. But Islamic State left it a bulldozed wasteland, save for two cracked relief sculptures, including one depicting a “Winged Genius” - a mythical Assyrian protective being.

“Almost nothing’s left here, but Islamic State only destroyed the big pieces,” said Abdullah, a security guard at Nimrud, shortly after the site was liberated in 2017.

“The best stuff was smuggled to Europe and sold. Local residents told us that, after Islamic State came, they were forbidden from entering the site but they watched Islamic State fighters stealing truck-loads of antiquities from here.”

Residents living near Jonah’s Tomb in Mosul also told MEE in 2017 that they had witnessed IS carting away treasures from the site before filling it with explosives and blowing it up.

Artefacts stolen by Islamic State continue to circulate on the black market. A people-smuggler based in Greece bought a large hoard of ancient gold coins for €2 million from Islamic State contacts last year, according to confidential sources.

In January, an Iraqi who has been working directly with Islamic State for several years to rescue enslaved Yazidi women and children, showed MEE video footage and Whatsapp messages of heaps of gold coins and ancient texts. The group, he said, had offered to sell him the booty for large sums of money.

The Islamic State thefts are considerable – but further south at Baghdad Museum, staff say they represent but a fraction of the prodigious looting which has plagued Iraq since the US-led 2003 invasion.

The losses include 15,000 artefacts, plundered from the National Museum during a four-day period in April 2003.

One of the most valuable, he said, was a 8cm-tall sculpture of a Babylonian-era “Guennol Lioness” - or "Lioness Devil" as it is known in Iraq. It is one of a matching male and female pair that date from around 3,000 BC.

“This lioness has disappeared from the market for now after being sold in 2007 at Sotheby’s, but we haven’t closed the case,” Dawed said.

“We don’t know exactly who bought it but we received information that it was purchased for $59.2 million by a British lord.” The buyer was listed as a private English collector. Until 2010, the lioness remained the most expensive antiquity ever sold.

Dawed said the mythology attached to this artefact - that whoever holds both the matching lioness and lion sculptures together could secure total world dominance - had ratcheted up its value. “Babylonian kings were very powerful and there is a mystery surrounding the origin of these powers so, because of its mythology, this lioness is extremely valuable,” he said.

Dawed was recently moved to a different department under the country’s new government, standard practice in Iraq, which often sees the loss of valuable expertise. But under his three-year tenure, the department oversaw the recovery of more than 5,000 artefacts.

These included eight pieces handed back with the help of the British Museum.

The US authorities retrieved a further 3,800 antiquities from a single haul during the Hobby Lobby scandal.

The American arts and crafts company, which is owned by evangelical Christians, illegally imported $1.6m worth of artefacts of dubious provenance from 2009, destined for the privately owned Museum of the Bible. In 2017, US courts fined the company $3m and instructed the return of the pieces.

A handful of recovered artefacts are on display in Iraq’s National Museum. An additional 100 pieces also feature in the Basra Museum, which opened in March in one of Saddam Hussein’s former palaces.

“This is actually just a small proportion of the artefacts taken out of the country.” Dawed says. “We are fighting to return Iraq’s stolen heritage. We have 200 active cases underway right now and every day the number increases because we monitor all international auctions.”

Last year, an Assyrian Nimrud relief, from the reign of King Ashurnasirpal II (883-859 BC), fetched $31 million at Christie's. Iraq made an unsuccessful bid to stop the sale, claiming the relief was excavated and illegally taken out of the country during the 1970s.

Christie's says it had been held in a private US collection since the 19th century.

Even while the Iraqi authorities try to recover items, illegal excavations and thefts continue at remote archaeological sites, largely unchecked.

“There are no special police to stop these activities and we have just one officer at each site so of course it’s very hard for him to protect the whole site.”

Well-known and accessible sites are, for the most part, adequately protected. After its liberation from Islamic State, Nimrud was fenced off by Unesco, supported by funds from the government of Japan, and secured by local forces.

Yass says that there are French government-funded plans to reconstruct the remains, starting later this year.

But some remote desert sites, only reachable by off-road vehicles or helicopter, stand unguarded.

Many artefacts are destined for the UAE, he says, which has become a regional hub for illegal antiquities trading.

There have also been cases of refugees smuggling artefacts into Europe, Dawed said.

Iraq’s Antiquities Recovery Department is currently working with Bulgarian police who have confiscated 122 pieces from refugees. “We’re not certain yet whether they’re all Iraqi pieces or if some are from Syria, but we’re working on this."

The loot from illegal excavations can be especially hard to recover: unlike stolen museum pieces, it often goes uncatalogued.  One of the department’s biggest challenges is to prove that treasures circulating in international markets are actually from Iraq.

He said recent Unesco resolutions aimed at protecting Iraq’s heritage had been helpful, but claimed many countries continued to flout such regulations.

“Auction houses ask us to prove artefacts are Iraqi, even though everyone often knows they are Iraqi and often the exact place they’re from, but items from illegal digging are undocumented,” said Dawed.

“We have constant fights with collectors and auction houses. Collectors show receipts and, although sometimes they’re fake, the auction houses pretend they’re real.

“Bureaucracy holds us back and processes are slow, so sales usually go ahead despite our protestations and efforts.” 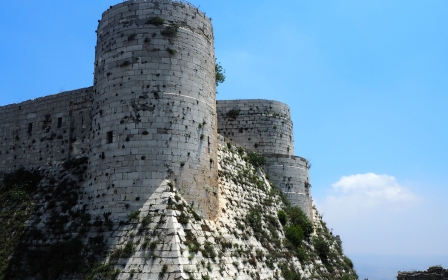 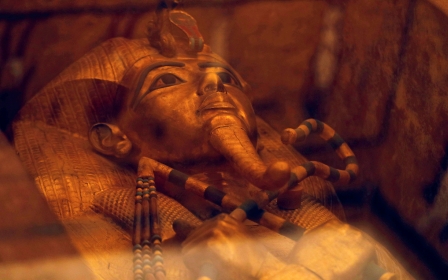 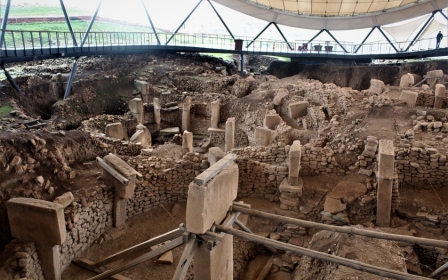