The Queen's gambit: The battle to return the ancient Libyan ruins in Windsor's Great Park

Framing a lake in the English countryside are ancient ruins from Libya. Now a lawyer is trying to repatriate them to their country of origin 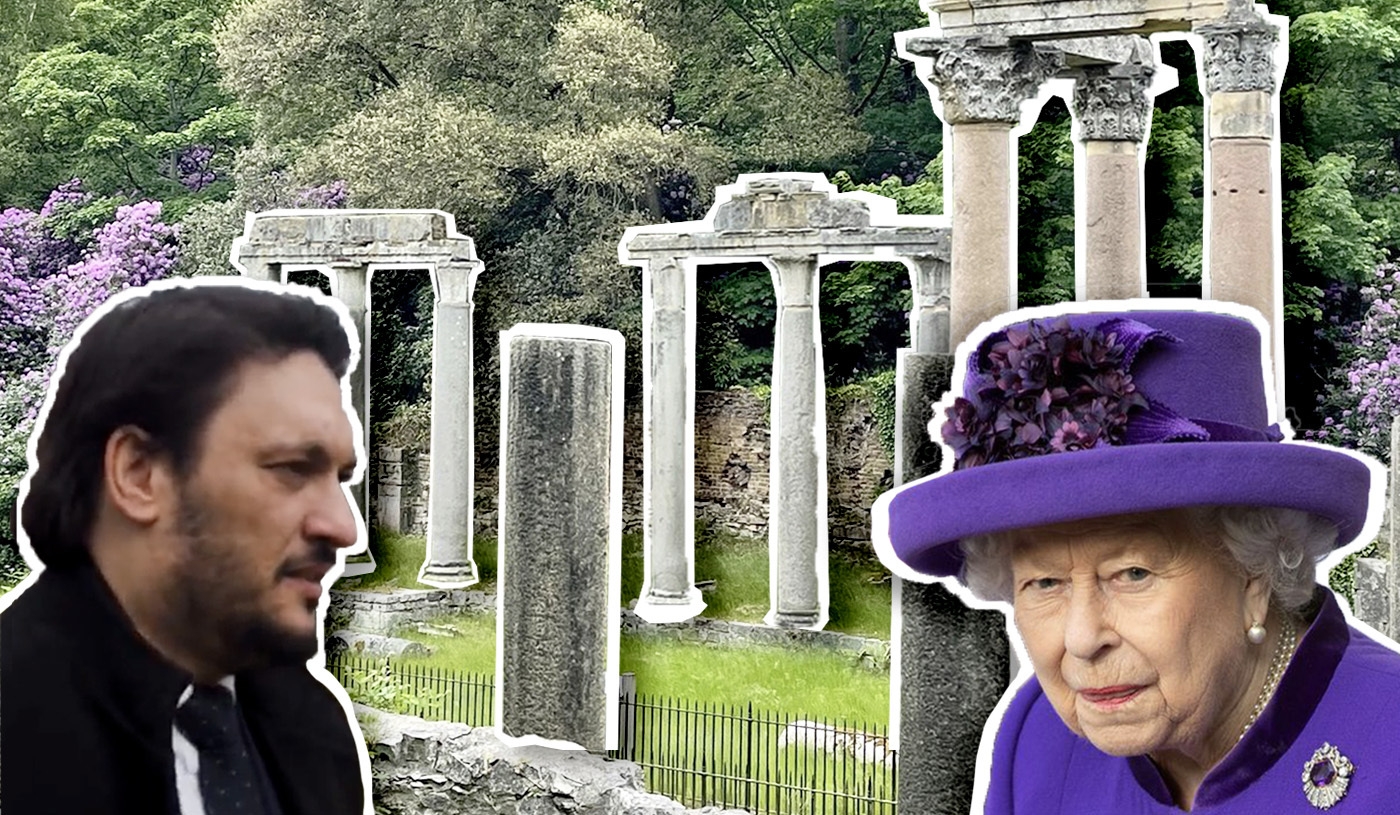 A Libyan lawyer is trying to repatriate the ancient ruins to Libya (MEE/Mohamad Elaasar)
By
Nadda Osman
in
Virginia Water Lake, Surrey

Virginia Water Lake in Surrey is an idyllic country setting on the southern edge of Windsor Great Park, about an hour by train from central London.

The beautiful lakeside surroundings, with its abundant flora, shrubs and cascading waterfall, were originally built as a royal playground and provide visitors and residents alike with a welcome respite from the bustle of modern life.

On any given day, the park is full of people enjoying the bucolic setting - young families picnicking on benches; dog walkers taking a leisurely stroll; joggers grabbing their morning exercise - the majority oblivious that right in front of them, set opposite the lake, are ancient columns from what is now Libya.

'Using their logic, we can take some stones from Hadrian's Wall, plonk them in another country and refuse to return them because "millions" are enjoying them'

Leptis Magna, an ancient city founded by the Carthaginian Empire, once stood tall at the opening of the Wadi Lebda valley, close to the Tunisian border.

The flourishing city was founded in the seventh century BC by the Phoenicians, and its towering columns formed part of what was a major trading centre.

Today, the ruins, known as the Temple of Augustus, are on the other side of the world. Anyone taking a walk in Surrey's Great Windsor Park can see the ruins, disassembled and fenced off amidst greenery.

In the royal park, there are 22 granite columns, 15 marble columns as well as over 20 pedestals and other inscribed artefacts and fragments of sculptures.

Now a Libyan lawyer is battling it out with the Crown Estate Commissioner to try to repatriate the ruins to their country of origin.

From Libya to England

More than 1,000 years after Leptis Magna turned into ruins, the site caught the eye of European colonialists, who took the columns to furnish stately homes and gardens and present them as gifts.

During the 17th century, 600 columns from the ancient city were taken to France to decorate Louis XIV's palaces at Versailles in France.

Britain also claimed some of the historic artefacts. In 1816, in what was then called Tripolitania, Lord Warrington, a British officer, and the head of the Royal Navy Lord Smyth convinced the Ottoman ruler Pasha Karamanli to let them take parts of the ancient site, including marble and granite columns.

The haul was presented to King George IV as a gift. However, he, along with the British government and peers, was evidently underwhelmed with the relics from this ancient city.

Upon seeing their less than satisfied reaction, Lord Smyth went on to exhibit the ruins at the then newly built British Museum until 1826, before transferring them to where they stand today in Virginia Water Lake.

King George IV's chief architect, Sir Jeffry Wyatville, used the stones from Leptis Magna and assembled them into a site, which he named "The Temple of Augustus," in the royal estate of the grounds of Windsor Castle, in close proximity to Virginia Water Lake.

At the site of the ancient ruins, all of those Middle East Eye spoke to had no idea what they were or where they were from, despite many of those people being asked had lived in the area for decades.

"It would be wrong to have them sent back or repatriated," said another man, who didn’t want to share his name. "I've been here since I was a kid, I've been coming here 63 years."

"We'd need to see proof really that this does belong to the Libyans because I can't see why Savill Garden [nearby garden in Windsor] or Virginia Water would have them here if it's not theirs," another woman told Middle East Eye, while walking her dogs.

Many of those going past the ruins said they had never paid much attention to them.

"I don't know anything about them, so I don’t really have an opinion," one lady said, while jogging past. "I'm pretty indifferent about it."

Not all the locals hold the opinion that the ancient ruins should stay in their current location, with some agreeing that they should be returned to Libya.

One mother, who was walking in the park with her young child, said that the ruins belong in their rightful place of origin.

"I guess if we just took them without asking, then they should go back. If these were built in Libya and were part of their previous civilisation, then they should be able to have the opportunity to put them back together and have that history on their doorstep where it was originally," she said.

"The locals here would get upset, but people always get upset don’t they? But these should be where they belong."

The struggle to repatriate

London based Libyan lawyer Mohamed Shaban is trying to convince the Crown's lawyers that the ancient ruins, which he says were illegally transferred, should be returned to Libya.

"We have requested from the Crown's lawyers any evidence of the legal transfer of the title [of the artefacts] from the Ottoman rulers to King George IV," he told Middle East Eye.

"So far the Crown have provided no evidence at all, and so we conclude that they were illegally transferred."

Shaban took on the case after being asked to by the Libyan embassy in London. The Libyan Ministry of Culture asked him to investigate the possibility of repatriating the artefacts, following the successful repatriation of other historical artefacts, such as the statue of the Goddess Persephone and the Donatella Flavia to Libya.

Shaban says the experience of trying to resolve the case has been tiresome and complex so far. The lawyer's client is the State of Libya, and he receives instruction from the Libyan embassy in London, the Ministry of Culture and the Libyan State Litigation Directorate.

"Dealing with the Crown's lawyers has been a frustrating experience. Despite sending detailed and polite letters requesting answers to various questions, principally relating to the transfer of the title, the Crown has simply been stalling," he said.

However, some progress has been made.

"A few days ago, I received a letter of apology from the CEO of the Crown Estate, who accepted the importance of my enquiries and stated that he is dealing with the matter, which is complex and requires input from various government departments."

Shaban explained that many people are unaware of the brutal history behind the ancient ruins, and that locals had risked their lives to save them.

Although Karamanli had agreed to give them to Lord Warrington and Lord Smyth, they were not his to give, as he had massacred a local Arab tribe to get the ruins.

'Blood was spilled to get these artefacts, it shows that people were willing to sacrifice their lives to save them'

The tribe, known as al-Jawazi, saw the columns and other parts of their heritage as an irreplaceable piece of their history.

On 5 September 1816, over 10,000 members of the tribe were killed by Karamanli, who was one of the longest reigning Turkish military pashas of Tripolitania.

The massacre was in retaliation for a revolt that broke out against the rule of the Karamanli dynasty and the fact that they refused to pay imposed taxes.

Karamanli ordered his soldiers to loot the tribe's property, which included ancient artefacts and the sought after Leptis Magna columns, as well as tens of thousands of livestock, cash and captives.

The al-Jawazi tribe defended the columns with their lives, something that Shaban says shows how important they were to the tribe’s cultural heritage.

"Blood was spilled to get these artefacts, it shows that people were willing to sacrifice their lives to save them," Shaban said.

"The case is legally complex, but morally simple, because the ruins are on Crown and not state land," said Shaban, describing how the case is far from straightforward.

One matter that has posed a further challenge for Shaban is the fact that the ruins predate all of the UN conventions requiring the return of cultural heritage.

Despite Shaban's efforts to emphasise that even laws post-1945 apply to these items, and that you cannot gift items of national heritage because they relate to the identity of people, he hasn't got far with the British courts.

Shaban said that he has been instructed by his client to try and resolve the case through negotiation and mediation under Unesco.

"The Crown Estate has recently demonstrated some receptiveness to our enquiries through their latest correspondence.

"I hope that this will lead to a constructive dialogue which may result in the Crown upholding their own high standards of integrity by returning to the Libyan people what is rightfully theirs," he said.

Fate of the artefacts

As the legal battle continues to play out, one question that has continued to crop up is the fate of the ancient ruins.

The subject has continued to rage on in the British media, which has only further intensified the debate surrounding the artefacts.

"One of the Crown Estate's representatives recently told the Evening Standard that the Leptis Magna columns should stay where they are because they’re enjoyed by millions of tourists each year.

"They seem to be using that as an excuse not to return the artefacts," said Shaban, who called the comments "nonsensical, comical and insulting".

"Using their logic, we can take some stones from Hadrian's Wall, plonk them in another country and refuse to return them because 'millions' are enjoying them," he said.

A spokesperson for the Crown Estate told Middle East Eye that the columns are now an intrinsic part of the area and its heritage.

"The Leptis Magna columns were installed at Virginia Water in the early 1800s. They remain on public display and are an important and valued feature of the Virginia Water landscape.

"They continue to be enjoyed by the millions of visitors to Windsor Great Park each year."

Despite the lengthy process of repatriating artefacts, some have been returned to their place of origin voluntarily by non-governmental organisations.

Some examples of this include The Wellcome Trust returning 93 Himyartitic objects to the Yemeni Museum Service and the National Army Museum agreeing to return the Abyssinian Emperor Tewodros II locks of hair to Ethiopia.

Although the legal battle continues, Shaban said that it is an issue that Libyans will not let go of lightly, describing the artefacts as part of his country's "DNA". Heritage
Who reached America first – Columbus or the Phoenicians? 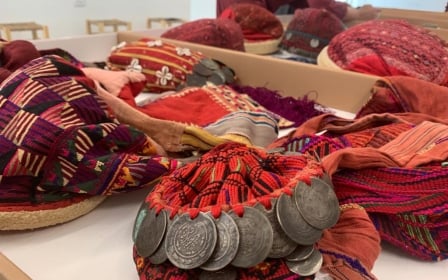