Women's football in Libya: The struggle to play on the field of dreams

With 'Freedom Fields', director Naziha Arebi depicts the courage of a female soccer squad in Tripoli 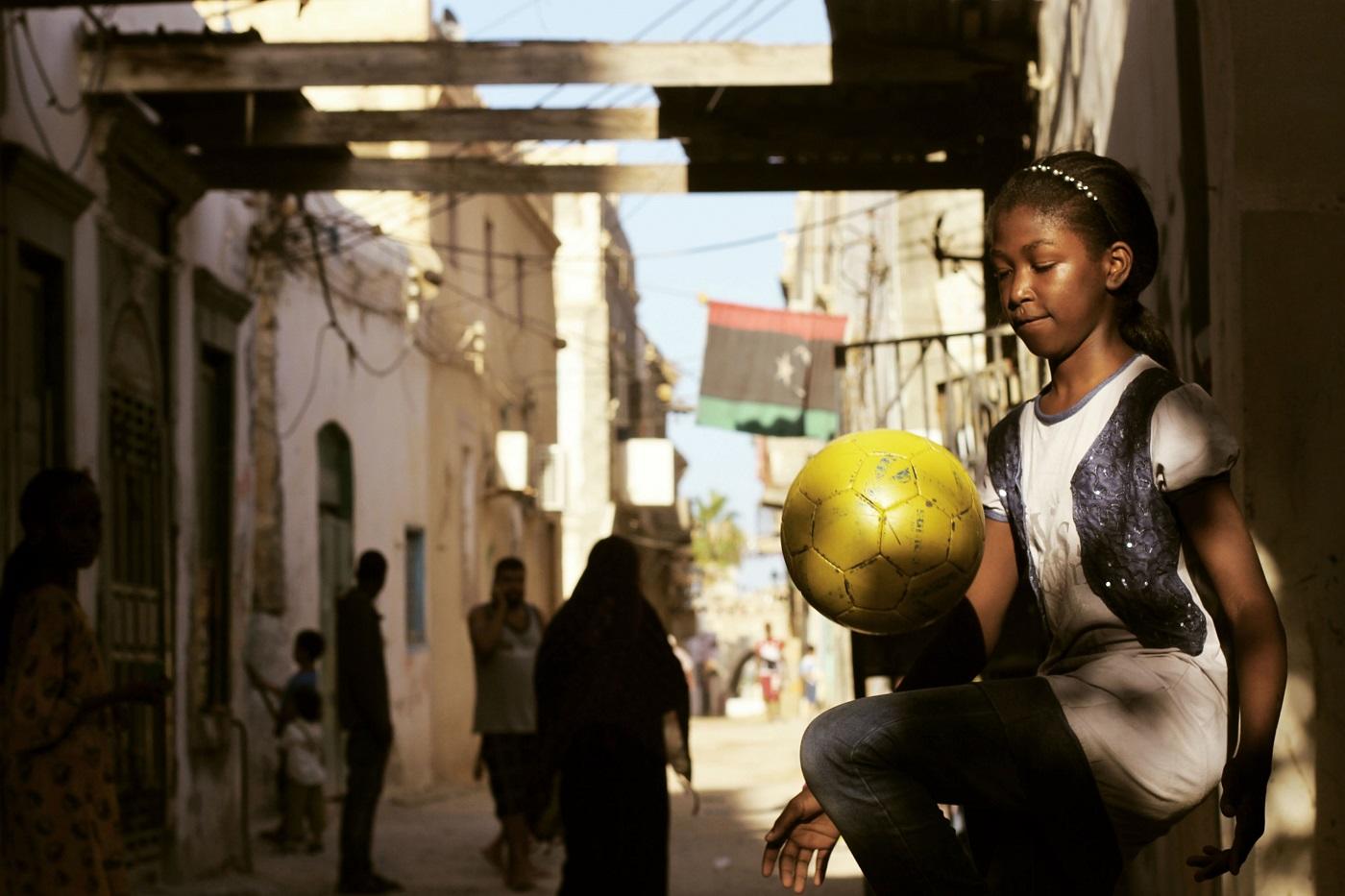 Libyans love football, but the idea of their own women playing the game, especially in an international arena, is far more complex.

The country's only female team was formed before the uprising of 2011 but has never played a full-length competitive match. The initial euphoria following the overthrow of Muammar Gaddafi seemed to be the perfect opportunity for the women to be accepted as national representatives abroad.

But the dream of playing an international game was thwarted at every turn, as the Libyan-British documentary Freedom Fields shows.

The feature shows how the team are obstructed by the Libyan Football Federation. By timing. By growing conservative feelings. By being turned away from football pitches after receiving threats. By constantly changing legislation preventing women from travelling abroad without a male guardian. By airport and border closures. By war.

Libya collapses into chaos, yet the the women press forward with hope and determination, despite the endless, often seemingly insurmountable obstacles, holding fast to their shared ambition to play the game.

Freedom Fields is edgy, carrying the audience into an increasingly complex space, yet one that is constantly illuminated by the smiles and wit of the women. And, despite the darker moments, it remains a story of human endeavour, infused with hope and lined with dark Libyan humour.

Naziha Arebi, the film's Libyan-British director, says: "It's not actually about the football. The moments when they are on the pitch is when their freedom manifests. When you live in an environment that is claustrophobic, small moments of freedom mean so much more."

The resulting documentary, which opens in the UK on 31 May, is as much about growing up, hope and trying to live normal lives during Libya's tumultuous descent into chaos, as it is about football.

The goal is to represent Libya

Arebi was inspired to make the film after returning to Libya in 2011. She had visited the country only once before, with her father in 2010, but had long been fascinated by her North African roots.

She recalls: "I heard about this women's football team who no one had ever seen play a match and, partly because I used to play football myself when younger, I thought: 'They sound cool, I'd like to hang out with them.'"

"It was hard," she says, "to find them, but eventually I did, and they were brilliant. They were so diverse, from different backgrounds, different places in Libya and were just very different people."

The film's three main characters reflect Libya's ethnic diversity: there is Fadwa, a pro-revolution, English-speaking oil engineer from Tripoli; Halima, a medical student with family roots in Libya's south; and Nahma, an internally displaced person (IDP) living in a makeshift camp on the outskirts of the capital after her community, widely viewed as pro-Gaddafi, were uprooted from their hometown of Tawergha.

Despite assorted political views and the growing inequality many Libyans felt after 2011, the team is united by a passion for football and a shared goal: to represent their country on the pitch.

But after a year of filming, it became apparent that the story Arebi originally wanted to tell – the positive post-2011 journey of the Libyan women's football team towards their first international match - wasn't going to happen.

"When the girls were stopped from attending a trip in 2013, people working with me thought that was the end of the film," says Arebi, "that I should stop and, actually, I had enough footage for a film. But that wasn't the story I wanted to tell."

Instead, she continued filming, even after Tripoli's 2014 civil war left the international airport destroyed, the democratically elected government chased out of the capital and Western embassies and NGOs relocated to Tunisia.

"In 2014, when everyone was leaving, it was especially important that I didn't leave, precisely because everyone else was. I'm not brave, it's these women who are brave.

"And making a film like this, you can't just drop in and out of people's lives. You need the patience to allow things to unfold with time, because only with time can you get a true understanding of people and place."

Arebi's decision to persist turned what should have been a two-year project into a seven-year journey, five years of which were spent filming.

For several periods of time, the disheartened team stopped training altogether. That was when, Arebi says, she committed to telling a more complex story.

"I had to adapt and trust that their stories were interesting and rich enough even without the football. There were periods when nothing was happening except them living in a place that was spiralling into chaos, but in that time they grow up, and some of the most engaging character-revealing scenes happen."

Freedom Fields also abounds with subtle reflections on Libyan society. The women follow international matches, often shown in the street in football-mad Libya, from their cars, their ears pressed to the stereo, or at home.

"The football pitch and the car became our space for freedom as we, as women, increasingly lost the public sphere," Arebi said. "It would be easy with a film like this to slot it into a cliche of Islamic extremism where everyone was against them, but there were also so many people supporting them. It's actually a cultural issue, not a religious one, and also a 'fear of the unknown' and, for me, it was very important to explore those nuances.

"Women in Libya have so many obstacles, but there are other, more general issues that everyone faces, such as being unable to get a visa just because you're Libyan, not having freedom of movement because of war and security, or not having cash, water or electricity."

Discussing gender issues, Arebi says: "I wanted to show the larger complexities - that there are also good men and bad women - because binary narratives from the MENA region are polarising and destructive and I don't want to be part of that system."

Throughout Freedom Fields, Arebi shows how the female footballers handle their own issues. Away from the drudgery of daily life in the IDP camp, Nahma wistfully longs to see Tawergha while pursuing her dream to be a Libyan sportswoman. Aside from football, she is also training to be an Olympic runner – but although she qualified for the Rio Olympics in 2016, she was unable to attend.

Between studying to be a doctor, working in a pharmacy and training, often alone, Halima dreams about marriage, but, as Fadwa wryly notes, none of the former players who married come back to the pitch, a contention that is challenged later in the film.

The women also shift their focus from their own goals to Hera, an NGO they establish for young people, using sport, team spirit and fun to help change Libyan society.

The complexities of filming in Libya

Libya has gained a reputation for being increasingly obstructive towards journalists and particularly hostile to cameras since 2014. It was a problem to which Freedom Fields was not immune.

"Directly after the revolution, there was no problem filming. Everyone wanted to tell their stories and be filmed. It was a naive and beautiful time," says Arebi. "But gradually, as the situation became more complex and people's fear increased, that changed."

This is reflected in the documentary which occasionally it becomes audio-only, as the camera is hastily pushed out of sight at checkpoints or casually carried at thigh level.

Some of the scenes were filmed during clashes: as the story progresses, so the distant sound of gunfire becomes an increasingly familiar backdrop, as Arebi evocatively depicts the confusion of living with unexpected intra-militia fighting.

"War is something you feel as much as experience," she says. "When you're in the situation, you feel the tension in the streets, you hear fighting in the background. I wanted to show this, show the normality of war, not the sensationalism. In real life, people often don't know what's happening, and if the girls don't, I thought, why should the viewer?"

Being dual nationality gave Arebi advantages: despite carrying a camera, she was viewed as bint biladi or "daughter of the country," and many Libyans worked on different parts of the film.

But she admits that, if she was only Libyan, then she probably couldn't have made the documentary, not least because her dual nationality meant she - crucially - knew how to navigate the minefield of applying for funding grants.

The film is co-produced by SDI Productions, the feature production arm of the Scottish Documentary Institute, and HuNa Productions, a Libyan-based female-led collective co-founded by Arebi and Huda Abuzeid in 2012.

"I could access things pure Libyan filmmakers could not," Arebi says. "But the industry has to change because the power structure in which you can make, fund and distribute a film is so Western-centric, which makes it a kind of neo-colonialism."

Despite Arebi being half-Libyan, Freedom Fields is still one of the very few features shot by any Libyan. The two best-known films made under Gaddafi - The Message (about the birth of Islam) and Lion Of The Desert (an epic about Omar Mukhtar, who led a 1920s revolt against colonising Italians) - were shot by Syrian filmmaker Moustapha Akkad.

The reaction of young fans

Freedom Fields has not yet been shown in Libya. There are no functioning cinemas in the country, and a civil war is raging on the capital's outskirts, but some private community and NGO screenings are planned.

The documentary debuted at Toronto International Film Festival last year before travelling to festivals in London, Stockholm and Minneapolis among others.

Arebi has found the response among the Libyan diaspora to be generally positive and often heartwarming. She recalls how one female student made a 16-hour round bus trip across Germany just to watch the film, and a group of Libyan girls who travelled hours, not once but twice, for a screening in Canada.

"There are no Libyan films," says Arebi, "so Libyans haven't seen themselves portrayed, or heard the Libyan dialect spoken on the big screen, and that has been inspiring even for people who aren't into football."

Arebi says Freedom Fields has also been inspiring for young Libyan film-makers, some of whom she is now in regular contact with.

"There's no shortage of stories in Libya, or people to tell them, but it's just hard. But, you'll see, there will be more films coming out of Libya in the next few years."

Freedom Fields is released in the UK on 31 May – full list of screenings here. 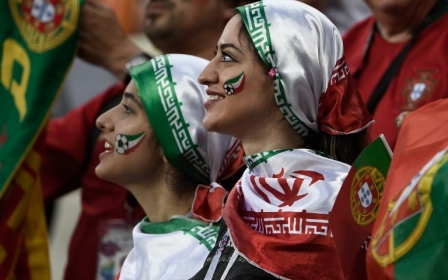