For years the poor could not afford to buy medicines - now even the middle class and rich cannot afford it, or even find it 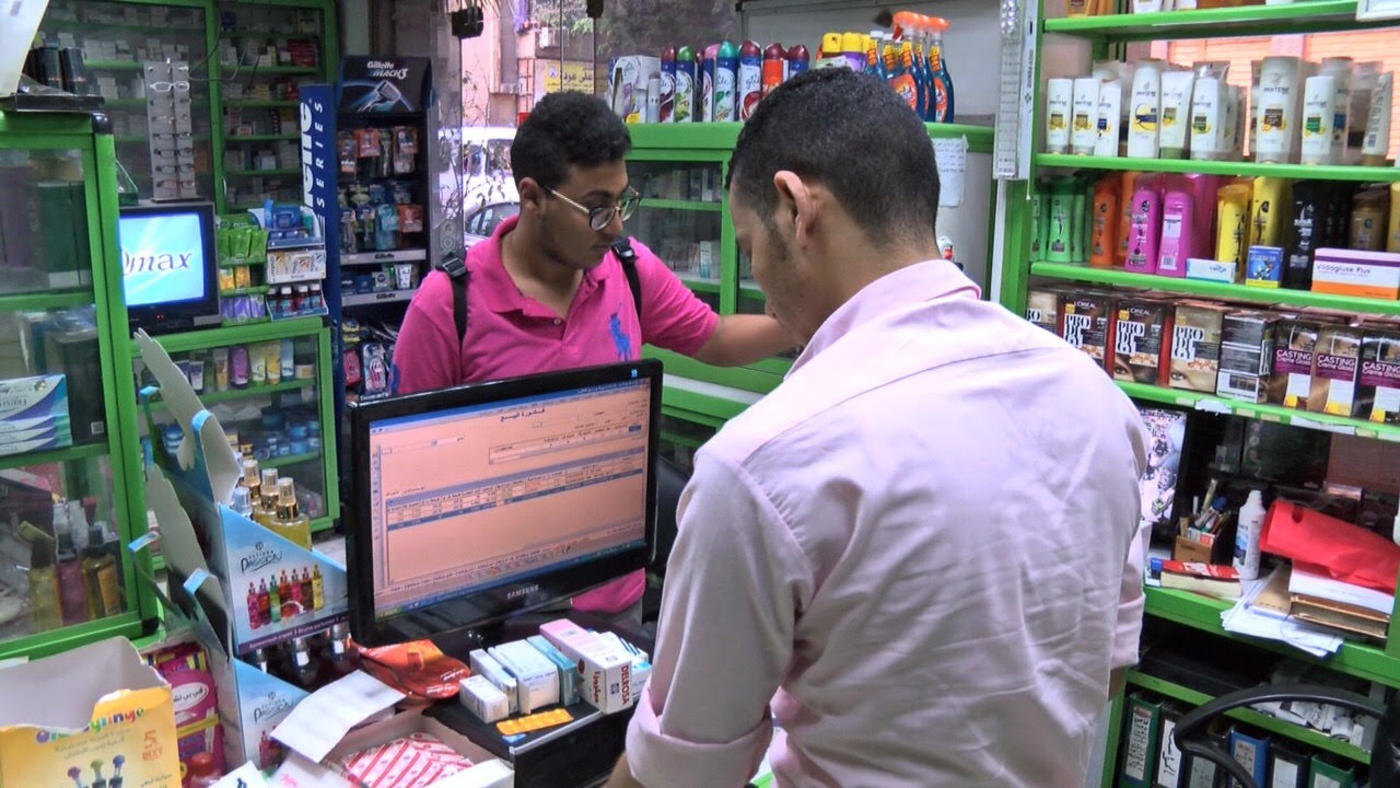 Araby’s 59-year-old wife Sabreen was diagnosed with serious heart disease in November 2014 and needed an urgent operation. Doctors prescribed Plavix for her to be taken on a daily basis, along with other medications.

Due to his limited budget, Araby tried to unsuccessfully convince a local pharmacist near his home to sell him two pills each time he went to the pharmacy for 15 pounds ($0.79), rather than buy a whole pack that he could not afford. Yet even if the pharmacist had agreed and Araby did have the purchasing power to buy the medicine, Plavix is not always in stock for customers.

Additionally, Araby has his own health issues to contend with. Thick glasses hide a problematic cataract in his left eye which has been causing him a great deal of suffering for months.

A pharmacist named Mohamed, 38, who manages a pharmacy in Araby’s area, confirmed that many customers, especially those who have chronic diseases, frequently request to buy one or two pills at a time.

“The situation is very bleak and miserable now. We have clients who no longer come to the pharmacy since the last increase in the prices of medicine," he said.

On 13 January, Egypt’s minister of health, Ahmed Emad, announced that the prices of 3,000 drugs out of a total of 12,000 would increase in Egypt after months of negotiations with pharmaceutical companies.

He explained during a press conference that the increase would be based on the type of medicine. This includes a 15 percent increase for locally produced medicines and a 20 percent hike for imported medicines. He added that it would only affect 5 percent of medicines used to treat chronic diseases.

A source in the Egyptian Holding Pharmaceutical Company, who preferred to remain anonymous because he was not permitted to speak to the media, told Middle East Eye that the companies were not satisfied with the price increases.

He added that they expected another increase to take place in the price of medicines in July or August. The cost of medicine has increased several times in the past few years, following the turmoil that unfolded in Egypt after the 2011 revolution that toppled autocrat Hosni Mubarak, which scared away foreign investors and led to a drop in Egypt's currency.

Egypt has a large pharmaceutical industry, but it relies on importing 99 percent of the ingredients of the medicines manufactured locally. In November 2016, the government floated the Egyptian pound which plunged against the dollar, as part of an economic reform package linked to a $12 billion International Monetary Fund loan.

With a severe dollar crisis, many imported medicines have disappeared from the pharmacy shelves, including medicines to treat diabetes, heart and kidney diseases; while the price of other medicines manufactured locally went up.

Amid the crisis, Egypt's military decided to form a pharmaceutical company to fill the gap in drugs production after receiving the necessary clearance on Sunday.
President Abdel Fattah al-Sisi has often called on the military to assist in major infrastructure projects in an attempt to reduce the repercussions of rising prices and the acute shortage of dollars. However the economic dominance of the military, which produces everything from bottled water to macaroni, has long been a controversial issue in Egypt.

Egypt's annual inflation rate soared to 23.3 percent in December 2016, with prices of healthcare, food and transport all costing more, according to official figures revealed in January.

In an attempt to find his own solution to the crisis, pharmacist Medhat Hafez allows customers that he knows well to pay him in instalments.

"If your prescription will cost 150 pounds ($7.93), we take half the cost and then you can pay us the rest in two instalments within one month," he said while selling insulin to a young lady. “We live with the people and feel their suffering."

'We live with the people and feel their suffering'

Reham Saad, a 27-year-old mother, complained of the rising prices and shortage of medicines.

"I have been searching for medicine for my six-month-old baby boy who suffers from intestinal catarrh, but I cannot find it at all,” she said while crossing the road to enter another pharmacy in the Saraya el-Qoba district north of Cairo.

Saad, who works in public relations for an international company, said in desperation that even doctors' fees had increased from 150 ($8) to 200 ($10.70) for each visit, in addition to a 30 percent increase in the cost of prescription medication she has to buy for her son.

Disappointed after failing to find the needed medication, she complained while getting back into her car: "I can bear anything to avoid a moment of pain for my baby.”

Hospitals, especially those outside of Cairo, have suffered a severe shortage of medicines. This has endangered the lives of millions of people, with patients suffering from kidney and heart disease being significantly susceptible to the crisis.

Ayman Mostaf, who is 37 years old, travelled 850 km from Luxor in the south of Egypt to Cairo in an attempt to search for medication for his seven-year-old daughter, who suffers from heart disease and is now hospitalised.

"I thought the medicine was out of stock only in Luxor; I was shocked to know that it's not available even here in Cairo," said Mostafa, in his jalabiya and dark scarf, adding that it was common to find a shortage of medication in Luxor, but not in the country’s capital city.

Eventually Mostafa finally found the medicine, but the price he paid was five times more than normal. Unable to afford the seven packages of medicine that he needed, Mostafa bought only three packs of the solution.

“This is unfair," he yelled.

Distributors say importing drugs or their ingredients has become more expensive after the devaluation of the Egyptian pound, but they cannot pass on the extra costs to customers, as the government caps prices for the medicines.

The health ministry in turn accuses distributors of stockpiling the medicines to force an increase in prices.

In November, health ministry spokesman Khaled Megahed said the government would not heed distributors' demands to raise drug prices, in order for them to make huge profits.

The companies denied these charges, stressing that the cost of medicine had already increased.

Osama Rostom, deputy head of the the Chamber of Pharmaceutical Industries, said that the prices of the ingredients of the medicines and imported medicines had increased following the floatation of the Egyptian pound. Therefore companies are forced to sell the medicines with old prices, leaving them to nurse major losses.

“This is completely unfair. We don't seek to make profits,” he said, adding that they only want to break even.

Activist Mohamed Fouad, manager of the Cairo-based NGO, The Egyptian Centre to Protect the Right to Medicine (ECPRM), told MEE that high prices were affecting all levels of Egyptian society.

"We are unfortunately used to the fact that the poor cannot buy medicines; now even the middle class and rich cannot afford to buy it, or cannot find it."

'We are unfortunately used to the fact that the poor cannot buy medicines, now even the middle class and rich cannot afford to buy it, or cannot find it'

Fouad pointed out that some medications for cancers and tumours had disappeared from pharmacy shelves and then re-appeared later on with skyrocketing prices on the black market.

"The role of NGOs and social media played a great role in saving the lives of many people who cannot afford to buy medicines. They replace the government now," he proudly added.

Many Egyptians took to social media to provide a solution to the crisis.

The hashtag #Twitter_Pharmacy was introduced to help people find medications they cannot find in pharmacies, while at the same time giving the opportunity for others who happen to donate medicine they don't need to Egyptians who do.

The account was created a few months ago by Khaled Omar, an Egyptian lawyer.

"There is an obvious medicine shortage crisis. We will not stand handicapped," he said.

In many cases, medicines that were not found in Egypt were sent from abroad. Egyptians posted their specific needs on Facebook and generous people from Gulf countries sent the medicines from abroad.

An Egyptian man working in the Gulf, who preferred to remain anonymous, provided Ahmed Omran, a doorman, with the medicine Biltricide for his wife's schistosomiasis.

The medication normally costs only four pounds ($0.21) in Egypt, but it cannot be found anywhere in the country. In a post on Facebook, Omran said he needed the medicine and after two weeks he received it from Saudi Arabia through the Egyptian man.

"It's God who saved us. I would have never been able to afford to buy the medicine or even found it. This is a mircale," Omran said.