On a daily basis, 110 million litres of raw or poorly treated sewage is pouring into the Mediterranean 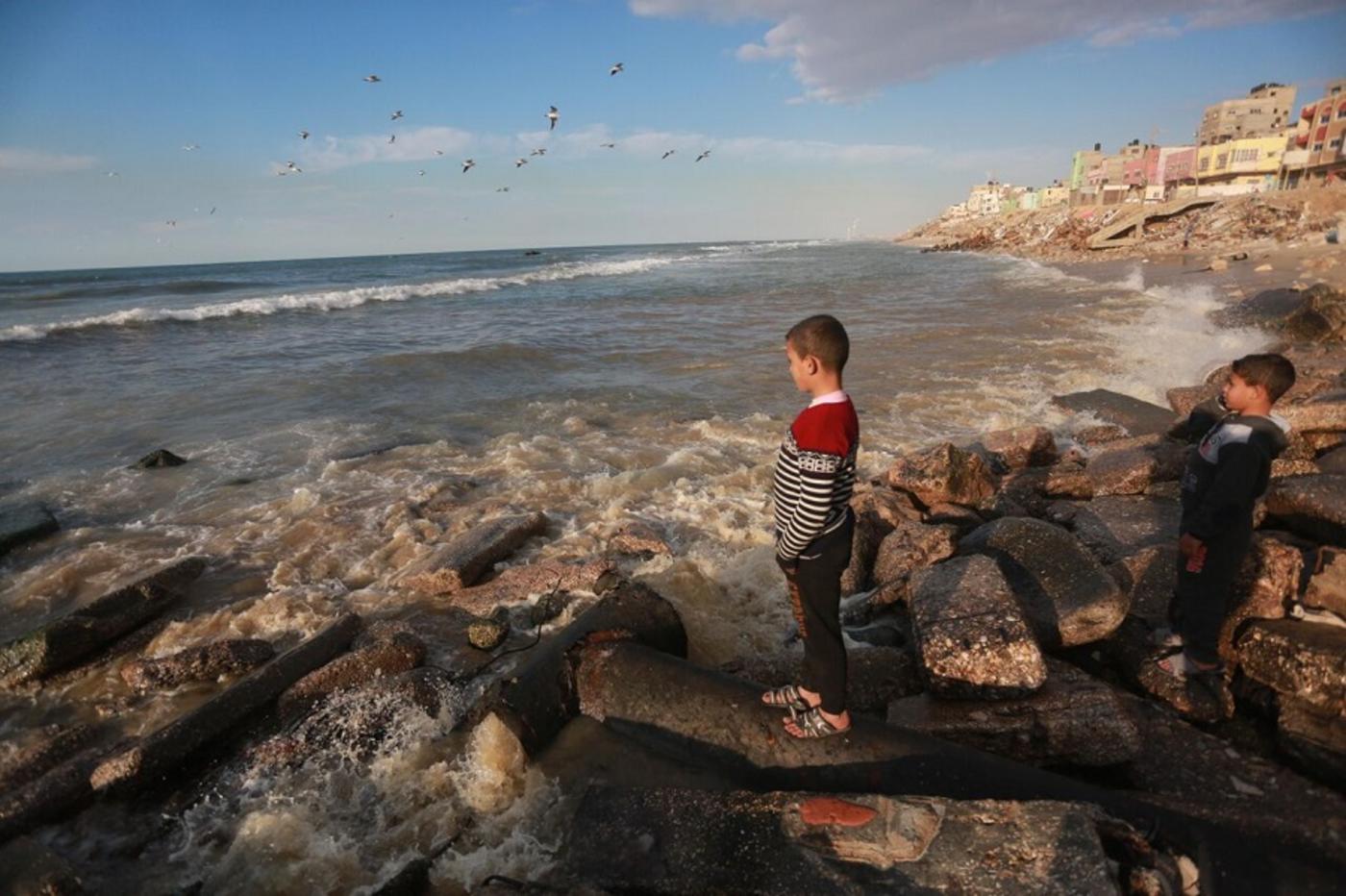 GAZA STRIP - Every morning, 37-year-old Abdallah Seyam goes swimming in the sea off the coast of Gaza, the only form of relaxation for many residents of the besieged strip.

Seyam, who used to work in Israel before 2000, eagerly awaits each summer to practice his “childhood hobby”.

“We live in a beach refugee camp in Gaza City. The sea is an indispensable part of our history and childhood. My father taught me how to swim on this beach, and nowadays, I teach my son. It’s our sea,” Seyam said.

'My father taught me how to swim on this beach, and nowadays, I teach my son. It’s our sea'

Last month, the Palestinian Environmental Quality Authority (PEQA) said that almost 50 percent of the beach is polluted by raw and partially treated sewage. It advised the people of Gaza to abide by its warnings and swim only in the safe zones that are far from the sewage estuaries.

“We have been hearing these numbers since forever. I don’t think that people will stop going to the sea," said Seyam. "Personally, I will take my son to the beach every day until he becomes a good swimmer. This sea is a heritage for every Gazan."

Seyam explained that families go for picnics on the beach and spend their days swimming in the sun. "The official authorities must take serious steps to clean it," Seyam commented.

The municipality has 20 rescue towers along Gaza City beach that serve as a guide to citizens and warn them of dangerous areas, in addition to flags and warning signs.

“After Ramadan, tens of thousands of people will go to the sea. We don’t have a strong executive force to prevent people from using their only recreation," said Maher Salem, the director general of water and sanitation in Gaza Municipality.

According to a recent UN report, 110 million litres of raw or partially treated sewage is poured into Gaza's sea daily, as a result of long power outages.

On 16 April 2017, Gaza's sole power plant was shut down after it ran out of fuel reserves, leaving over two million Gazans in darkness for around 20 hours each day. Before the current power crisis, the sewage was pumped through treatment stations in Gaza, where it went through two stages. “The electricity crisis is the main reason behind this environmental disaster," said Dr Ahmed Hilles, environmental awareness director at the Environmental Quality Authority.

'We have been hearing these numbers since forever. I don’t think that people will stop going to the sea'

The situation escalated in April when the Palestinian Authority told Israel that it will no longer pay for the electricity Israel supplies to Gaza. Israel does not engage with Hamas, which it regards as a terrorist organisation. Hamas took control of Gaza from forces loyal to Palestinian President Mahmoud Abbas in 2007, one year after it won legislative elections.

The PA had previously started taxing Israeli fuel it buys for Gaza's sole power plant - which led to a hike in costs that Gaza's government has been unable to pay for.

Hilles explained that the water sector in the strip needs more than 60 megawatts just to run the pumps, desalination plants and sewage treatment plants, which Gaza can no longer provide.

“Before 16 April, we had to use generators for four hours a day, which is bearable. But now, we have more than twenty hours of power cuts. We don’t have enough resources or fuel to run the generators," Salem said.

"Even if we have the fuel, our generators are stand-by generators, not heavy duty, and can’t work for long hours,” he added.

Gaza’s infrastructure has been destroyed in three wars with Israel since 2007 and with the Israeli blockade in place, it has been extremely difficult to rebuild.

“Every three or four years, a massive war is waged on Gaza, destroying most of the infrastructure and leaving more than two million tons of concrete in the streets. So we cancel all our plans and [development] projects to face the consequences of the war," Salem said.

'Every three or four years, a massive war is waged on Gaza destroying most of the infrastructure'

- Maher Salem, the director general of water and sanitation in Gaza Municipality

The rapid population growth in the small strip has not helped the situation either.

“With 2.2 million people living in less than 368 square kilometres and a population growth rate of 4.2, the mission of improving the situation is very difficult and complicated. We have an exploitation and high pressure on the available resources which are extremely deficient," he said.

According to Hilles, sewage is highly loaded with organic and harmful materials, in addition to pathogens that exist in wastewater. These highly toxic materials are very dangerous to Gazans and marine life and have the potential to spread typhoid and cholera.

Hilles said that he had tested samples of Gaza's beach and sea water and found parasites in more than 50 percent of the samples.

A doctor in a local hospital, who preferred not to be named, told MEE that he had recently treated some unwell patients who had been to the sea within a time span of 48 hours. Yet he could not confirm that the sea was a direct cause of their illnesses, saying that they could have eaten rotten food from a non-working refrigerator caused by long power cuts.

“We proved that the sea is full of pathogens, but it’s almost impossible to connect those pathogens with cases in hospitals. Gaza is full of pollutants. Water, air and vegetables are polluted. Even food in houses can be rotten due to the long power cuts," said Hilles.

'Gaza is full of pollutants. Water, air and vegetables are polluted. Even food in houses can be rotten due to the long power cuts'

Marine life has been harmed by the environmental disaster as well. Fish feed on solid waste from sewage water in a sea where overfishing has already depleted marine life.

“Fishermen have been fishing in this narrow area of six miles for years. The sea is already drained, but sewage ended any hope of improving the situation. Even if fish don’t die after feeding on sewage, Gazans will be affected by eating fish," said Hilles.

'It’s a conspiracy against us'

According to Salem, the water and sanitation sector needs 300,000 litres of fuel every month to operate efficiently, which costs a hefty $700,000.

'With this scarce income, we don’t know what to do. Should we buy fuel? Or pay part of our employees’ salaries? It’s a conspiracy against our people'

- Maher Salem, the director general of water and sanitation in Gaza Municipality

“With this scarce income, we don’t know what to do. Should we buy fuel? Or pay part of our employees’ salaries? It’s a conspiracy against our people,” Salem said.

He pointed out that the United Nations Office for the Coordination of Humanitarian Affairs (OCHA) provided $500,000 for the purchase 50,000 litres of emergency fuel to maintain the delivery of essential services at hospitals and other emergency medical facilities, which is expected to run out in July. According to Salem, this will leave the city drowning in its own sewage.

“The municipalities sector is a humanitarian issue. We refuse to use it as a tool to put the government under pressure. We asked for help from international and humanitarian organisations, but they refused because it’s a political situation against the Gaza Strip and the government," said Salem.

"But in fact, ordinary people are paying the price,” he concluded.