'I remain concerned about the platform AIPAC provides for leaders who express bigotry and oppose basic Palestinian rights,' Sanders says (Reuters)
By
Ali Harb
in
Washington

US Democratic presidential candidate Bernie Sanders announced on Sunday that he will skip the AIPAC conference this year, in a decision that underlines the erosion of bipartisan support for the pro-Israel lobby in Washington.

Two days after emerging as the undisputed front runner in the Democratic race with a commanding victory in the Nevada caucuses, the Vermont senator made it clear that he will not be attending the AIPAC event for political, not scheduling, reasons.

He also renewed his pledge to support the rights of both Palestinians and Israelis, saying that he will do "everything possible" to bring peace to the region.

AIPAC, formally known as the American Israeli Public Affairs Committee, was quick to hit back at the senator, pointing to the attendance of many of his Democratic colleagues as well as diverse participants.

"By engaging in such an odious attack on this mainstream, bipartisan American political event, Senator Sanders is insulting his very own colleagues and the millions of Americans who stand with Israel. Truly shameful," the group said in a statement.

Sanders came in first in the Democratic contests in New Hampshire and Nevada after winning the popular vote in Iowa.

While the first three states account for only a small fraction of the delegates needed to win the nomination, they serve as an early sample of the electorate and provide momentum to the candidates who win them.

Sanders has put forward foreign policy proposals outside the mainstream of American politics, including vowing to impose conditions on US aid to Israel in order to pressure the Israeli government to end the occupation and improve the humanitarian crisis in Gaza.

"If you want military aid, you're going to have to fundamentally change your relationship to the people of Gaza," Sanders said last October. "In fact, I think it's fair to say that some of that $3.8 billion should go right now into humanitarian aid in Gaza." 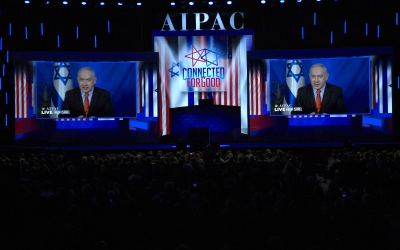 An AIPAC-linked Democratic group has been running attack ads against Sanders, attempting to cast doubt over his ability to defeat President Donald Trump in November.

Sanders also skipped the AIPAC conference in 2016 when he was running for the Democratic nomination against the former secretary of state Hillary Clinton.

None of the Democratic presidential candidates are confirmed to be taking part in the three-day Washington conference, which will take place in early March.

Senator Elizabeth Warren was the first 2020 hopeful to rule out attending the AIPAC event.

Warren answered affirmatively when asked by a voter at a New Hampshire town hall earlier this month if she would skip the conference.

The voter said: "I'm an American Jew and I’m terrified by the unholy alliance that AIPAC is forming with Islamophobes and antisemites and white nationalists, and no Democrat should legitimise that kind of bigotry by attending their annual policy conference."

Warren did not reject the premise of the question, simply answering "yeah" when asked if she would skip the event.

Top Democrats, including House Majority Leader Steny Hoyer and key Senator Bob Menendez, will be speaking at the AIPAC conference.

Still, the absence of presidential candidates who usually indulge the demands of the party's base will raise questions about the pro-Israel lobby's ability to maintain the support of both parties.

Last month, AIPAC drew the ire of Democrats when it ran ads likening Democratic legislators to the Islamic State militant group over their criticism of Israel.

Minnesota Democrat Betty McCollum, one of the congresswomen targeted by the lobby's attack, issued a fiery response to AIPAC last week, calling the organisation a "hate group".

"AIPAC claims to be a bipartisan organisation, but its use of hate speech actually makes it a hate group," said the congresswoman, who had introduced a bill to prevent US aid to Israel from contributing to the imprisonment of Palestinian children.

She added: "By weaponising antisemitism and hate to silence debate, AIPAC is taunting Democrats and mocking our core values."