A British journalist for the Times has been deported from Egypt, the London-based newspaper reported on Saturday, in a move it said reflected the "oppressive environment" created there for the press.

Bel Trew was driven to the airport and forced to board a flight in February, but the paper held off commenting publicly as it sought to negotiate her return to cover elections starting on Monday.

This had proved fruitless, and a spokeswoman said: "The Times deplores this attempt to intimidate and suppress our coverage.

"This is sadly in line with the oppressive environment that President [Abdel Fattah] al-Sisi has created for the press."

Trew was arrested by the police inside the Shoubra area of Cairo where she was conducting an interview in a cafe, local sources said.

The arrest on 20 February was made as she attempted to leave the cafe. She was then taken to Al-Sahel police station.

A source inside the UK Embassy in Cairo, who was not authorized to talk to the press, told MEE that a delegation went to the police station to follow up on her arrest and argued against her deportation.

In its Saturday edition, the Times said: "It is a nervous regime that fears an experienced foreign correspondent conducting an innocuous interview in a Cairo cafe. Bel Trew, The Times's reporter in the Egypt of President al-Sisi, has been arrested, interrogated, put on a list of 'undesirables' and forced to leave the country after a chain of misunderstandings, heavy-handed police treatment and official obfuscation."

Hours after the arrest, and threatened with a military trial, Trew was escorted by the police to the Cairo International Airport, where she was deported on the morning of 21 February.

"I was marched on to a plane with nothing but the clothes I was standing up in. The choice before me - stay for a military trial or leave - was no kind of choice. Such an apparent misunderstanding was surely easily cleared up," Trew writes in the Times.

A high-ranking police officer in the ministry of interior told MEE that Trew, who has been in Egypt for seven years, was also investigating the murder of the Italian student Giulio Regeni, who died in 2016.

"She was detained for reporting negative news about the country. She also didn't have a permit to practice journalism in the country."

However, Trew wrote in the Times: "My business in the cafe had been unremarkable: an interview with a penniless man whose nephew, a teenage migrant, had probably drowned at sea trying to get to Italy. He had been on board a migrant boat that vanished two years ago."

She adds: "Yet inside the police station, the questions were taking a sinister turn. An informer in the cafe had apparently told police that I was discussing the Egyptian state's involvement in the sinking of a migrant boat off the coast of Rosetta in 2016 - an entirely different boat from the one we were discussing."

I've lived in #Egypt for 7 years, it's my beloved home and I'm not sure when I can return. I was arrested after doing an interview and threatened with military trial unless I got on a plane. Like others, I still don't know what happened:https://t.co/m5EmyP8bg7

A spokesman for the British embassy in Cairo told the paper that Foreign Secretary Boris Johnson "has raised the case directly with the Egyptian foreign minister".

"The Egyptian authorities have not shared any evidence of wrongdoing. We will continue to press them on this," the spokesman said.

AFP sought a response from the Egyptian foreign ministry but it was not immediately available.

The media in Egypt have been under close scrutiny in the lead-up to the elections, in which Sisi is the main choice on the ballot paper.

There has been an increase in the number of cases of journalists being arrested and websites blocked. 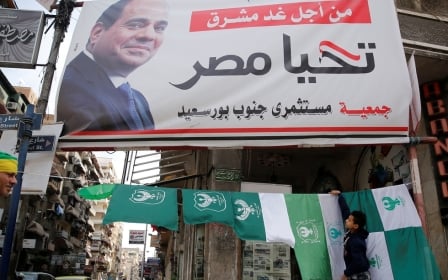