Doctors say the family should tell Ahmed the truth about his mother, father and brother while hospital psychologists are around to help NABLUS, Occupied Palestinian Territory - Hussein Dawabsha said the day he tells his grandson what really happened to his family will be the hardest day of his life.

Ahmad Dawabsha, four, has been in the hospital since 30 July, when a group of Israeli extremists believed to be from a nearby settlement set his home ablaze in the northern West Bank village of Duma, just south of the city of Nablus.

His family thought the knowledge was too much to bear for the little boy, who has been recovering from severe wounds on most of his body, but doctors say the time has come.

“We are trying to break the news slowly to him, but soon we will have to sit down with the hospital’s psychologists and really tell him his parents and brother are dead,” Hussein said.

Doctors and family members have both decided Ahmad needs to be told what happened, but no one is sure just how to go about breaking the tragic news.

“The doctors said it is best to tell him now, when he we have psychologists on call here at the hospital, but they also said he is not going to understand what to be dead actually means,” Hussein said.

“The doctors said that after we tell him for certain and explain to him that his family is dead, he will probably still ask about where they are and when they are coming back. Because he is so young, his mind is not old enough to really understand.”

Ahmad was admitted to the hospital with burns over 60 percent of his body.

“By that math it is supposed to take him 180 days to recover, and we have been at the hospital with him for around 150 days, so God willing we are getting closer to him being able to come home.”

Hussein has spent nearly all of the 150 days at Ahmad's bedside.

“Ahmad needs me, he is to the point where he won’t sleep or eat or listen to the doctors without me there,” Hussein explained. “His life and my life have become one life.”

Mohammed Dawabsha, the boy’s 75-year-old great grandfather, said no one expected his wounds would be so bad, or that his recovery would take so long.

“When the fire first happened they rushed Ahmad here, to my house,” Mohammed told Middle East Eye from the courtyard of his home in Nablus, just a few houses down from where the arson took place.

“His clothes were still smouldering, I remember patting him down trying to make the smoke stop, but the thing is, he was still walking then. He could walk.”

Mohammed believes Ahmad must have been in shock, and couldn’t get feel the pain that would soon course through his little body.

“In the beginning it was so hard, he was so small to be dealing with something like this, but he is so much better now.”

Ahmad’s uncle, Hassan, said like his father Hussein, he has been at the hospital with Ahmad every second he can spare. He is able to spend around four nights a week at Tel Hashomer hospital in central Israel with his nephew.

Two weeks ago was the first real happy day Hassan can remember since the fire, Hassan says, pulling out his camera phone to show MEE a video he took of Ahmad taking his first steps since he was in the hospital - with the help of a walker.

“The doctors said he was finally ready to try and walk and we were ecstatic,” Hassan said. “That was a happy day for all of our family.”

Hassan said doctors at Tel Hashomer have been great with Ahmad, and that he never felt his family was treated differently for being Palestinians from the occupied West Bank. However, he does not believe that the majority of Israeli society would reflect the treatment his family has received at the hospital.

“There are definitely Israelis who have come by the hospital and have voiced their disgust and regret over what happened, but they aren’t enough. The left is not strong enough to change anything in Israel,” Hassan said, adding that he believes between 70 to 80 percent of Israelis don’t care about what happened on that dark night in July.

“Most of them (Israelis) think we are terrorists, and that the children would have grown up to be terrorists, so they don’t care. Sure, they will acknowledge that the people who attacked us and started the fire committed a crime, but just that, a crime, like any other crime. They definitely don't view that act as an act of terrorism or anything with a deeper meaning.”

Two months after attack, political and social turmoil began to tear through the region. More than 150 Palestinians have been shot dead by Israeli military and civilians since the start of October, and 20 Israelis have been killed in Palestinian attacks.

Despite the fact that tensions have continued and evolved, Palestinians in the occupied West Bank are still holding onto the memory of what happened to the Dawabsha family.

On 21 January, marchers in the city centre of Hebron carried toy babies bundled in blankets, with signs that read “We won’t forget Ali,” referring to Ahmad’s baby brother who was burned alive in the arson attack.

While Nablus and Hebron are at the very opposite ends of the occupied West Bank, hours away from each other, and while the protests were actually focused on the boycott of Israeli goods, protesters still made the boy a part of their march.

Ahmad’s grandfather said he is not surprised about the continued uproar over what happened nearly six months ago.

“What happened from the fire did not just hurt my family, it hurt all of us, every Palestinian.” 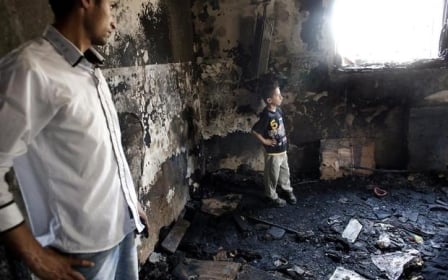