The Egyptian president was quick to congratulate Biden, though the president-elect's rhetoric on human rights and political prisoners spells conflict 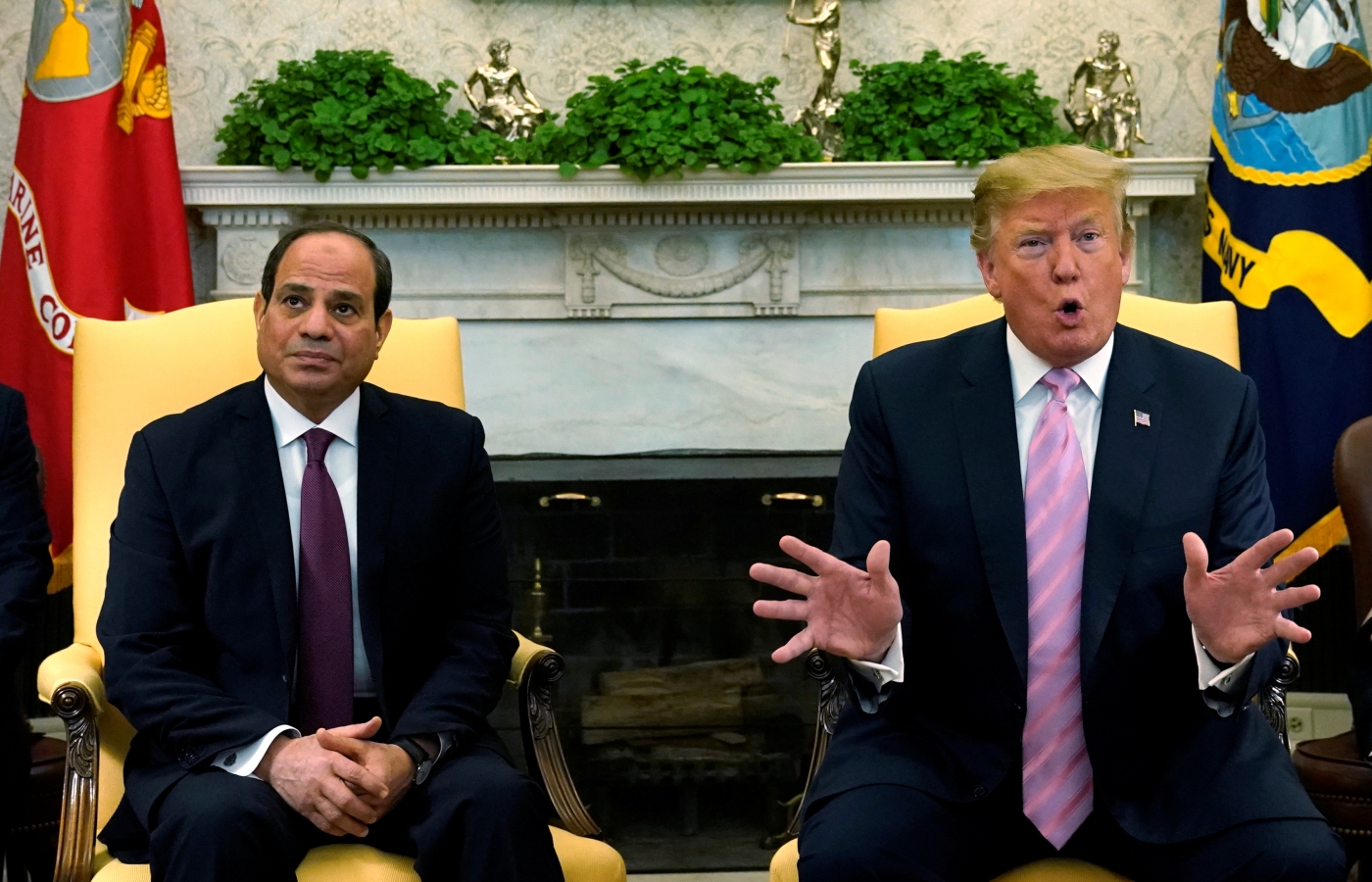 While Egyptian President Abdel Fattah el-Sisi was the first Arab leader to congratulate US President-elect Joe Biden on his election victory, Donald Trump’s loss is projected to usher in an era of a "less tolerant" US policy toward Egypt.

Apart from pleasantries, the mood in decision-making circles in Cairo might be of worry, even though the possibility of Trump's defeat must have been anticipated.

Biden's coming to the Oval Office, observers argue, may bring to the table issues Cairo might not like to discuss, including human rights.

"Egyptian officials have always rejected discussions about human rights," journalist and free speech advocate Khalid al-Balshi told MEE. "They accuse whoever raises these issues of being a foreign agent."

'It is difficult for any American president to overlook Egypt. The US cannot protect its interests in the region in the absence of a strong ally like Egypt,'

Biden’s legacy with regards to advocating human rights issues in Egypt, however, has been a mixed one.

In the early days of Egypt's pro-democracy revolution in 2011, Biden, then Obama's vice president, defended Hosni Mubarak, saying he knew him "fairly well" and that he "would not refer to him as a dictator." He cited Mubarak's "very responsible" attitude towards Middle East peace efforts, particularly in relation to Cairo's normalisation of its relationship with Israel.

Yet, during his campaign in 2020, Biden criticised Trump's support for Sisi, signalling a possible change of rhetoric in the new administration.

In a tweet in July, Biden issued a stern warning to Sisi, saying if elected president there would be "no more blank checks for Trump's 'favourite dictator'" in reference to Trump's remarks during last year's G7 summit, when the president asked "where's my favourite dictator?"

Welcoming Egypt's release of Mohamed Amashah, an American medical student who had been imprisoned in Egypt without trial for 486 days, Biden issued a scathing attack on Trump's relationship with Sisi, saying Cairo's crackdown on human rights would not be ignored by his administration.

The military general-turned president is accused by international rights groups of overseeing the country's worst crackdown on human rights in Egypt's modern history, with tens of thousands of his critics languishing in jails. Scores of political prisoners have been executed. Days prior to the US election results, Egypt released hundreds of political prisoners. The latest among them were relatives of Egyptian-American human rights advocate Mohamed Soltan who announced on Friday, hours before Biden was projected to win, that five of his relatives detained in reprisal over his activism had been released.

Biden had highlighted Soltan’s case in his criticism of Sisi four months ago, prompting analysis that the release was a sign of “backtracking” by Sisi once Biden’s victory became more likely.

Some expect Cairo to take further measures in the coming period to improve its human rights record and ease possible tensions with Biden.

"I believe this is what will happen in the coming period because the new administration in the US will likely be less tolerant toward repression," Balshi said.

Tensions in the Obama era

Egypt's dismal human rights record caused relations between Sisi and the administration of former US president Barack Obama to deteriorate before Trump entered the White House in 2017.

Obama met Sisi only once in September 2014, on the sidelines of the United Nations General Assembly meetings.

For most of the meeting, the former US president refused to look at his Egyptian guest, amid reports of tensions over the brutality with which Sisi had treated the opposition, especially the Muslim Brotherhood, the movement of late president Mohamed Morsi who was ousted in July 2013 in a military coup led by Sisi himself.

"The events of 2013 in Egypt caused relations between Cairo and Washington to deteriorate because of opposition in the US to the way Morsi was ousted," Nadia Helmi, a professor of political science at Beni Suef University, told MEE.

Tensions between the two administrations held back cooperation between Cairo and Washington on many fronts. In September 2014, the US Congress withheld hundreds of millions of dollars in economic aid to Egypt.

Military cooperation between the two sides was also negatively affected, with - among other things - the US delaying the delivery to Cairo of F-16 fighter jets that Egypt sent earlier to the US for repair.

'Chemistry' between Sisi and Trump

But Trump's coming to power offered Sisi and his administration relief from Obama's stress on human rights issues.

Sisi was the first head of state to contact Trump to congratulate him on his election victory. Ahead of his election, Trump said there was chemistry between him and the Egyptian leader.

Trump was a strong supporter of the Egyptian president, especially on important files like Egypt's row with Ethiopia over the latter's controversial Nile dam. In late October, Trump told interim Sudanese Prime Minister Abdalla Hamdok that nobody could blame Egypt if it bombed the Ethiopian dam.

They even praised Cairo for its role in fighting terrorism, empowering women, reforming the economy and promoting religious freedoms - accolades that are contested by the government's critics.

Trump was more open than his predecessors in acknowledging that Sisi's authoritarianism did not disqualify his country from US support.

"Human rights will likely cause tensions between the two sides, but this will not destroy relations between them," Tareq Fahmi, a professor of political science at Cairo University, told MEE. "At the very end, the two countries are keen on preserving strong ties."

With the largest population in the Arab Middle East and being in control of the Suez Canal, one of the world's most strategic waterways, no US president can afford to disregard Egypt, a pro-Sisi MP told MEE.

"It is difficult for any American president to overlook Egypt," Dalia Youssef, a member of the Committee on Foreign Relations in the Egyptian parliament, told MEE. "The fact is that the US cannot protect its interests in the region in the absence of a strong ally like Egypt."

Expedited naval access through the Suez Canal is a key component of US-Egyptian relations.

The Egyptian navy facilitates the transit of US naval units through the canal, including most recently in May 2019 when the US deployed its aircraft carrier Abraham Lincoln and its strike group through the Suez Canal, amid rising tensions with Iran around the Strait of Hormuz.

"These considerations will necessarily counterbalance problems in relations between the two countries," Youssef said.

The two countries will still need to work out a way to avoid tensions in the coming period, especially when it comes to Egypt's desire to diversify the sources of arms for its military, analysts said.

Egypt has been trying to reduce its dependence on US arms supplies. It struck arms deals in the past six years with France, Germany, the UK, China, and, most importantly, Russia.

Reports of Egypt planning the purchase of the Russian Sukhoi Su-35 multi-role fighter aircraft could potentially trigger US sanctions on Egypt under the Countering Russian Influence in Europe and Eurasia Act of 2017. On 8 April 2019, a bipartisan group of 17 senators wrote a letter to Secretary of State Mike Pompeo expressing concern regarding Egypt's possible purchase of the Su-35.

The next day, in testimony before the Senate, Pompeo said the US administration made it clear that the purchase of those systems would bring sanctions on the Egyptian regime under the aforementioned law.

In Cairo, analysts believe that this would be a thorny issue in relations between Cairo and the new administration in the US, especially if Washington does not understand Egypt's need for upgrading its military to counter the challenges it is facing in securing its borders and its strategic interests in the region and fighting terrorism in Sinai.

"The US believes it has common strategic interests with Egypt, which is why it wants to be the sole provider of arms to it," Fahmi said. "However, Sisi has succeeded in breaking this rule, in full disregard to threats from Washington." Inside Egypt
Egypt detains two men on 'suspicion' over their sexual orientation: HRW