Erdogan's White House visit: Strategic success or 'kicking the can down the road'?

While Turkey's president appears to have scored a win, many issues remain unresolved after meeting with Donald Trump, analysts say 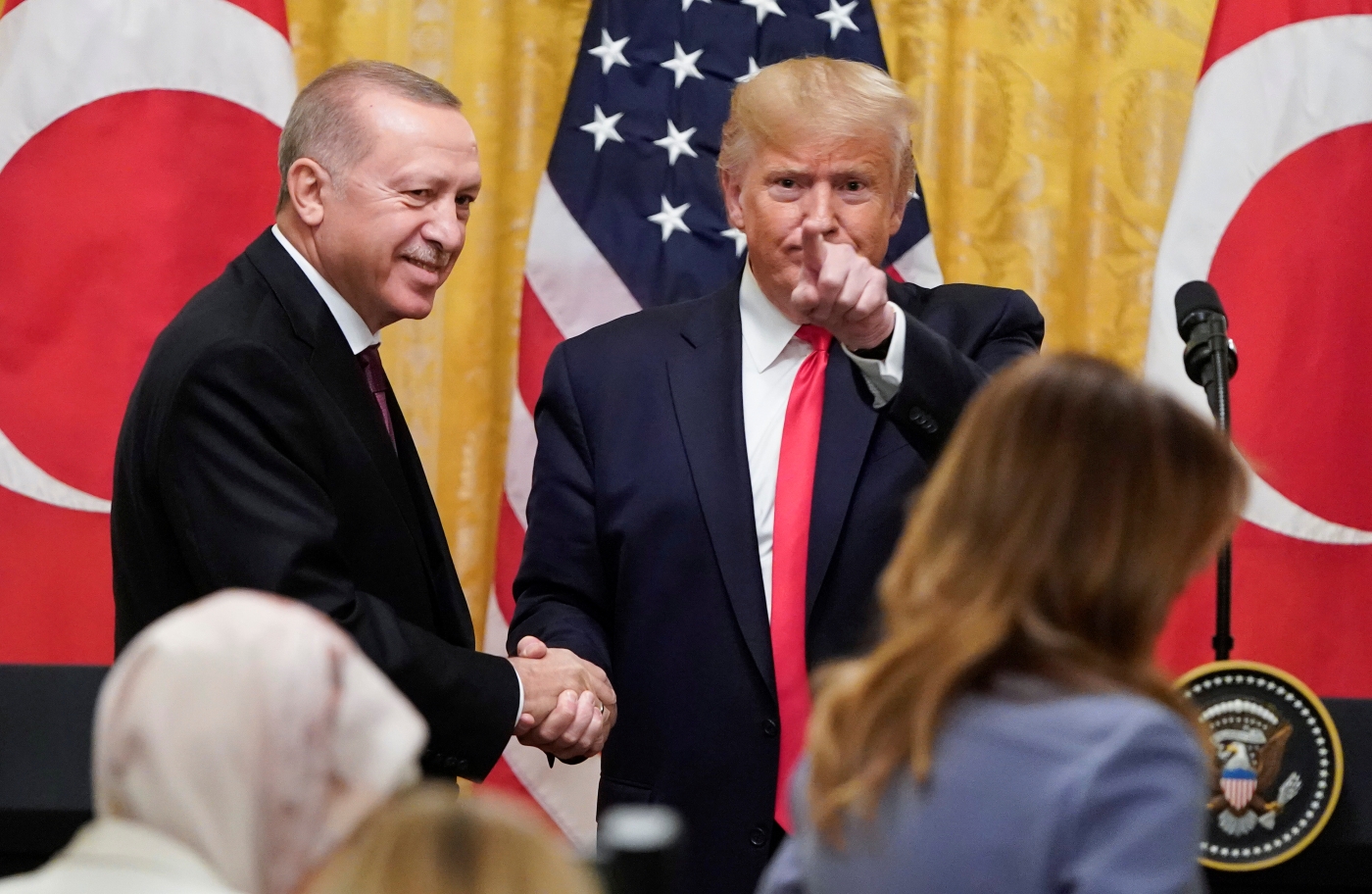 Turkish President Recep Tayyip Erdogan was in Washington last week for a meeting with his US counterpart Donald Trump at the White House.

After a busy day, niceties were exchanged: Trump praised Erdogan as a great leader as the latter hailed the visit as a new chapter in the US-Turkey relationship.

The visit yielded some positive results: a plan to increase bilateral trade between Ankara and Washington to $100bn was announced and Trump said efforts to resolve a dispute over Turkey's purchase of Russian missile systems were ongoing.

But several contentious issues appear to have been left unresolved and analysts have questioned what really came out of the widely touted summit. Erdogan meets Trump: What are the main issues on the table?
Read More »

"The meeting was billed as a way to straighten things out on issues - not just Syria, but broader NATO issues with the S-400s," said Marcus Montgomery, a congressional resident fellow at Arab Center Washington DC, referring to the Russian-made missile defence systems.

"But it doesn't really sound like they got much accomplished," Montgomery told MEE in a telephone interview.

Many foreign leaders try to get an invitation to the White House in order to show the strength of their ties to the US, said Michael Reynolds, an associate professor of Near Eastern Studies at Princeton University.

Reynolds said that was not necessarily the case for Erdogan, however.

"Erdogan belatedly is recognising that Turkey's not in the very good position - with its bad relations with the US - and it's now becoming overly dependent upon Russia for security," he told MEE.

"So I think that this is probably an attempt by Erdogan to say let's try to work something out if we can."

The visit came amid unprecedented criticism of Ankara among US lawmakers, who have been incensed over the country's recent military operation to push out American-backed Kurdish fighters in northern Syria.

But during his time at the White House, Erdogan met with some of his toughest critics in Congress, sitting down with five top Republican senators - Lindsey Graham, Jim Risch, Ted Cruz, Joni Ernst and Rick Scott - to discuss Turkey's purchase of the S-400s and the Turkish incursion in Syria.

While the Trump administration announced in October that it would move its troops out of the war-torn country, effectively giving Turkey a green light for its offensive, the US Congress has pushed forward legislation condemning the incursion and calling for sanctions against Ankara.

'I have always described Turkey as an ally - a deeply problematic ally, but an ally nonetheless'

- US Republican Senator Ted Cruz after meeting with Erdogan

The senators who met Erdogan were vocal in their anger over Turkey's recent actions.

"Turkey's misguided invasion into northern Syria now threatens to unravel all of the progress the US and our partners have fought so hard to achieve," Risch said in a statement last month.

After their meeting with the Turkish leader, however, some changed their tune. "I have always described Turkey as an ally - a deeply problematic ally, but an ally nonetheless, in a very troubled region of the world," Cruz said in a statement after the meeting.

That same day, Graham blocked a resolution in the US Senate that would have recognised the killing of Armenians by the Ottoman Empire as a genocide. The same motion overwhelmingly passed in the US House of Representatives earlier this month, angering the Turkish government.

And then, a day after the meeting Risch also announced that a resolution to impose sanctions on Turkey over its Russian S-400 purchase would be put on hold.

Mustafa Gurbuz, a professor of Arab world studies at American University in Washington, said Erdogan came out of the meeting as the clear winner because of a freeze on critical motions in Congress.

"The freeze on congressional actions was the most important outcome to give confidence to the troubled Turkish economy," Gurbuz told Middle East Eye.

Reynolds said the Republican leaders were likely "reminded that from the US perspective, there's a lot to lose" if they maintain their tough stance against Ankara.

Turkey's purchase of the Russian missile system has been a sticking point between Washington and Ankara for years, but the criticism in Congress escalated after the Countering American Adversaries Through Sanctions Act (CAATSA) was passed in July 2017.

In recent weeks, tensions between the United States and Turkey have increased over Ankara's decision to purchase missile defence systems from Moscow.

The US says the Turkish government's plan to acquire Russian systems poses a threat to the F-35 aircraft, and has threatened to kick Turkey out of the F-35 programme if it doesn't scrap its deal with Russia.

Here's a timeline of tensions between the NATO allies over the past several years:

1999: The F-35 programme begins, with Turkey joining as a partner along with Australia, Canada, Denmark, Italy, the Netherlands, Norway, the United Kingdom and the United States.

September 2009: The US Defence Security Cooperation Agency (DSCA) notifies Congress that it is considering the sale of a $7.9bn Patriot missile defence system to Turkey.

September 2013: Turkey announces that it has decided to purchase a Chinese missile system, thereby rejecting US, Russian and French-Italian options.

November 2015: After years of arguments with its NATO allies, Turkey says its deal to buy the Chinese missile system has been scrapped.

14 July 2017: Turkey agrees to purchase as many as four S-400 missile defence systems from Russia for $2.5bn. The decision means Ankara has turned down a US offer to purchase Patriot systems, which did not include a transfer of missile technology.

The law would later be used to threaten sanctions on countries that seek Russian weapons systems, including the S-400.

Meanwhile, US President Donald Trump's administration sanctions the Chinese military for the acquisition of S-400s in breach of CAATSA. Turkey argues it is exempt from the act, however, as its S-400 deal came before CAATSA was made into law.

December 2018: The US gives Ankara the green light to purchase a $3.5bn package of Patriot systems, giving them until 15 February to agree on a deal.

16 February 2019: Turkey says there is no going back from its deal with Russia and rejects the US offer.

19 February 2019: US Vice President Mike Pence speaks to Recep Tayyip Erdogan, urging the Turkish president to renege on the Russian S-400 deal in favour of the American one. Erdogan responds by saying that Ankara's deal with Moscow is at a point of no return.

1 April 2019: The US announces it has halted the delivery of training and other F-35 equipment to Turkey.

9 April 2019: US senators threaten sanctions on Turkey, and once again urge the country to scrap its deal with Russia. Meanwhile, two more F-35s are sent to Arizona to be used for the training of Turkish pilots.

17 April 2019: During delegation trip to Washington, Turkish Defence Minister says talks with US counterpart were "constructive", while revealing little in terms of details.

23 May 2019: Deputy Turkish foreign minister Yavuz Selim Kiran says US did not threaten Turkey with sanctions over its failure to cancel the purchase of Russian-made S-400s by the first week of June. He insists Washington is searching for temporary solutions to the crisis.

31 May 2019: Turkish officials tell Middle East Eye that the US has accepted an offer to form a joint technical study group with Turkey to investigate Washington's concerns over Ankara's purchase of the Russian-made S-400 missile system.

7 June 2019: The US presents Turkey with an ultimatum: Cancel plans to buy Russia's S-400 defence system by 31 July or be expelled from the joint F-35 training programme.

14 June 2019: Turkey threatens to take "reciprocal steps" if the US imposes sanctions over its purchase of the Russian S-400 systems.

Many in Washington have said that the Russian system could be used to spy on the American F-35 fighter jets, but the Turkish government has insisted it doesn't pose a threat - and that it won't step back from its agreement with Moscow.

And some US senators have remained steadfast in their stance that if Turkey activates the missile systems, they will put forward a sanctions measure.

Max Hoffman, associate director of national security and international policy at the Center for American Progress, a Washington-based think-tank, said the sanctions bill was put on hold because lawmakers - namely Senate Majority Leader Mitch McConnell - don't want to waste time on a resolution they know Trump will eventually veto.

"Enough senators are willing to give Ankara more time to reconsider the S-400 purchase to prevent a veto-proof majority - for the time being," Hoffman told MEE.

But the hold on the sanctions bill "does not mean that Erdogan is gaining support in Congress", he added.

While analysts say the short-term optics of the visit are in Erdogan's favour, the country still faces a lot of tough questions when it comes to its relationship with the US.

Gurbuz said that Turkey still needs help from the Trump administration to administer its so-called safe zone in northern Syria.

A deep-seated mistrust between the Pentagon and Ankara hinders the possibility of implementing a safe zone with the help of the US, Gurbuz added.

'The meeting enabled Trump and Erdogan to buy more time, kicking the can down the road'

The S-400 issue still remains unresolved, as well, with Erdogan's spokesman recently saying that "Turkey will activate the S-400".

The US and Turkey plan to deploy a joint working group to solve problems that may arise from using both the Russian S-400s and US F-35 fighter jets, the spokesman also said last week.

Still, as of right now, Trump is the only real ally Erdogan has in Washington, said Gonul Tol, director of the Center for Turkish Studies at the Middle East Institute.

With his visit last week, Erdogan wanted to "signal to President Trump that he values his friendship and his partnership", Tol told Middle East Eye.

"The meeting enabled Trump and Erdogan to buy more time, kicking the can down the road," added Gurbuz, of American University.

"The tough questions will likely appear in even bigger forms in the next few months."

Analysis
The logic behind Israel's Gaza attack, if any, is anyone's guess
Analysis
Russia’s move against Israel’s Jewish Agency is part of its regional game
Analysis
Why the language of hate in Israel's election is a real security threat