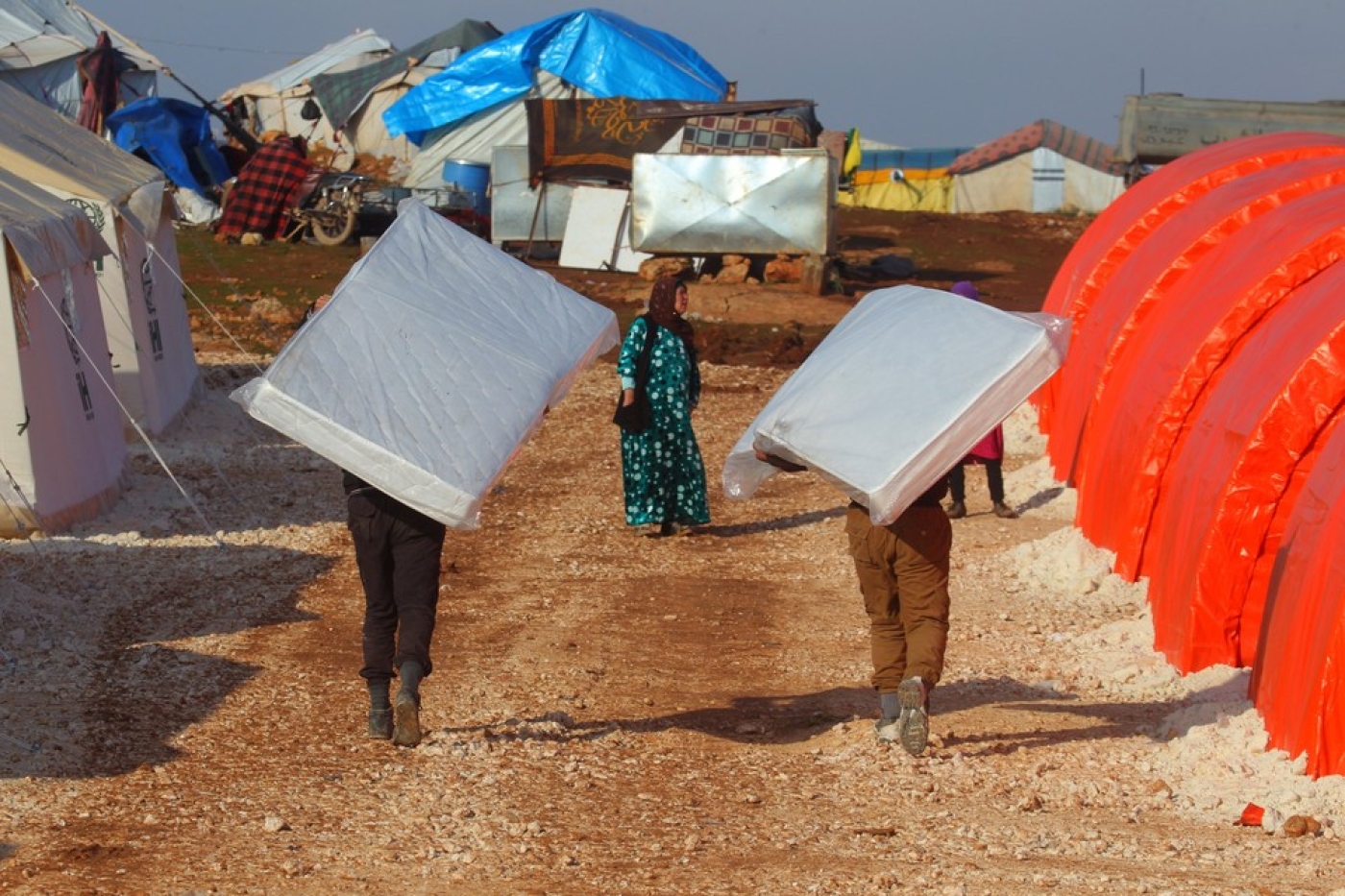 British aid workers in Syria are being stripped of their citizenship by the UK government, Middle East Eye has learnt.

At least two aid workers based in northern Syria have been deprived of British citizenship on the grounds that they “present a risk to the national security of the United Kingdom,” according to recent letters sent to their families by Home Secretary Amber Rudd.

In another case, a volunteer who has delivered aid into Syria and worked on charity-funded projects there was “assessed to have been involved in terrorism-related activity” and “Islamist extremist activities”.

All three say they have never fought in Syria and none have been charged with any offence in the UK relating to their activities in the country. MEE is not revealing their identities because all are currently mounting legal appeals to have their citizenship restored.

They deny having any links with militant groups, although the area in which they have worked on aid projects includes territory in Idlib province where various iterations of the formerly al-Qaeda-aligned Hayat Tahrir al-Sham (HTS) have operated over several years.

All three have demonstrable track records as aid workers and have liaised with numerous recognised charities and humanitarian organisations from the UK and elsewhere over the course of Syria’s war to facilitate the flow of supplies into rebel-held areas, as well as helping to run facilities for internally displaced Syrians.

'Aligned with an al-Qaeda-aligned group'

One of those targeted told MEE that the letter sent to his family said that he was assessed to be “aligned with an al-Qaeda-aligned group”.

“I am an aid worker. Everything I do is transparent. They believe I am affiliated with al-Qaeda which is ridiculous,” he said. “We risk our lives every day to help people and they call us terrorists.”

Jahangir Mohammed, a consultant working with charities in the UK involved in sending aid to Syria, said the fact that the aid workers were operating in the same area as armed groups were present did not mean that they were “aligned” with the fighters.

“Obviously there are 200 charities operating in that part of Syria and they come into contact with the fighters. The reality is that there are separate civilian authorities and networks that work with the charities. The fighters would not jeopardise the population turning against them by interfering with aid,” Mohammed told MEE.

He pointed out that another humanitarian organisation operating in the same area, the Syria Civil Defence, commonly known as the White Helmets, had received funding from the British government.

If I am a threat simply because I have been to Syria, then all they are doing is criminalising compassion
- British aid worker

“In conflicts, propaganda against aid workers and charities is commonplace, even the White Helmets are regularly accused of being aligned to al-Qaeda. Charities, authorities and journalists need to be able to distinguish fact from propaganda.”

One of the aid workers told MEE that he had been allowed to travel between the UK and Syria several times earlier in the conflict despite regularly being questioned by counter-terrorism police about his activities at ports and airports.

But he said his citizenship had only been removed once he had left the UK for an extended period.

“I wasn’t assessed to be a threat then, and now I’m not in the country I am considered a threat. If I am a threat simply because I have been to Syria, then all they are doing is criminalising compassion,” he said.

Citizenship stripping is highly controversial and legally contentious in the UK, with civil liberties campaign group Liberty describing it as “a hallmark of oppressive and desperate regimes,” and human rights lawyer Gareth Peirce calling it a process akin to being cast into “medieval exile”.

But the use of deprivation orders, which critics complain are typically issued when a person is out of the country, has withstood scrutiny at the European Court of Human Rights, where judges earlier this year rejected an appeal by a Sudan-born British citizen who said that losing his citizenship over terrorism concerns had been discriminatory and violated his right to a family life.

According to the British Nationality Act, which defines the circumstances under which someone born in the UK can be stripped of their citizenship, the home secretary can only utilise the power if they are satisfied that that deprivation “is conducive to the public good” and that doing so would not make a person stateless.

Both of the aid workers currently in Syria were born in the UK and say they do not consider themselves citizens of any other country, although they are entitled to citizenship elsewhere through their parents. They say they are now effectively stateless in a war zone with no legal way out.

Asked to clarify how the government determined whether somebody could be served with a citizenship deprivation order, a spokesperson for the Home Office said that a “range of checks” were carried out.

“This may include, for example, consideration of an individual’s personal circumstances and research in to the nationality laws of the country concerned,” the spokesperson said.

“The law requires that this action only proceeds if the individual concerned would not be left stateless. This extends to people who may have been born in the UK, but who hold another nationality, for example, through one of their parents.”

All three are appealing to have their British citizenship restored, but that process is complicated by the fact that the government has refused to fully reveal the information on which it has based its decisions.

In all three cases, Rudd wrote that the decisions had been taken “in part reliance on information, which in my opinion, should not be made public in the interest of national security and because disclosure would be contrary to the public good”.

Appeals in citizenship removal cases are initially heard by the Special Immigration Appeal Commission (SIAC), a windowless basement room on a back street behind London’s Royal Courts of Justice that has been called England’s "most secret court”.

SIAC deals primarily with cases involving national security in which appellants and their lawyers are not allowed to see all of the evidence presented against them by the security services.

Instead, government-vetted lawyers known as special advocates are appointed to represent them but cannot speak to the appellant or their legal team about the so-called “closed material” in the case.

Documents shared by the government with one of the aid worker’s lawyers as part of the appeal process included several pages in which every word had been redacted.

The process is further complicated because all of the appellants are outside of the country and unable to return to the UK, and all three cases could take years to be resolved.

One lawyer with experience of the SIAC process told MEE that fighting such cases was incredibly frustrating because of the difficulties involved in building a case on behalf of a client barred from returning to the UK and who may not even be in a position to meet their legal team in person.

“The fact that you cannot talk to [the client] in person is incredibly difficult. You cannot have conversations about redacted material over the telephone. You need to do it face to face,” the lawyer said.

The UK government has highlighted its increasing use of citizenship removal powers because of concerns about the threat posed by British fighters returning from Syria amid the collapse of the Islamic State (IS) group, which attracted significant numbers of western nationals to its cause.

A report in the Sunday Times newspaper in July said that “more than 150 jihadists and other criminals have been stripped of their citizenship and banned from returning to Britain” over fears of an “influx of militants from Syria”.

“There’s an awful lot of people we have found who will never be coming home again,” one senior security source was quoted as saying.

But Matthew Gibney, professor of politics and forced migration at the University of Oxford’s Refugee Studies Centre, said he believed those figures were exaggerated as the newspaper appeared to have also included citizenship deprivation orders for reasons other than national security, such as fraud, and passport confiscations.

The UK stands out among western countries as the country where citizenship is, for large numbers of people, the least secure
- Matthew Gibney, professor of politics and forced migration

The most recent official figures indicate that 33 people were deprived of British citizenship on the basis that to do so was “conducive to the public good” between May 2010 and December 2015. Four of these cases were in 2014 and five were in 2015.

“It is true that they have certainly become a lot more willing to strip citizenship and to deprive people of passports,” Gibney told MEE. “If you want a safer figure on deprivation I’d say we are looking at about 45 to 50 since about 2011.”

Gibney said the UK government had the most extensive citizenship stripping powers available to any western state.

“The standard is that the home secretary, without any kind of court decision beforehand, adjudges that your holding citizenship is not conducive to the public good.

"That is an incredibly broad standard, and it marks the UK out among western countries as the country where citizenship is, for large numbers of people, the least secure.”