More than 12,500 people have died in Syria's prisons in five years of war, according to human rights campaigners. MEE speaks to two who survived 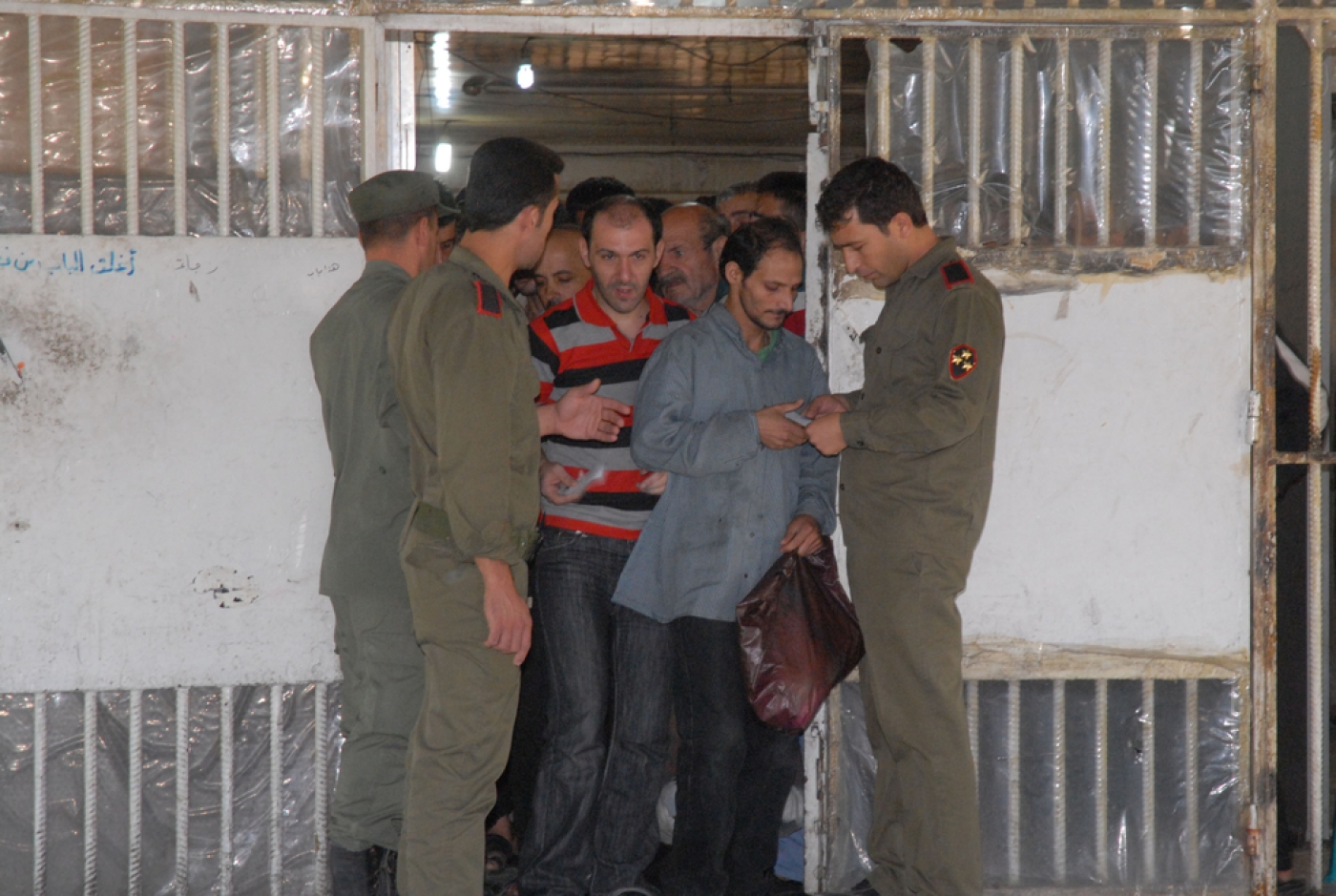 Inmates of Damascus Central Prison are released on 11 June 2014. The families of some prisoners are forced to pay huge bribes in order to secure their release (AFP)
By
Lizzie Porter

STOCKHOLM - Omar al-Shogre was 17 when they came for him. That autumn day in 2012, as the olives were harvested and the apricot trees in the family garden shed their leaves, would be his last moment of freedom for nearly three years.

Omar would spend the rest of his adolescence in a total of 11 Syrian prisons, facing torture from a multitude of men belonging to the government’s elaborate, sinister security apparatus. "I could drink their blood," Omar told MEE from Stockholm, where he now lives, his voice full of vengeance.

His family had been part of the 2011 uprising against the government of Bashar al-Assad in Tartus province on Syria’s Mediterranean coast. They were part of a Sunni minority in the heartland of the government’s Alawi sect.

Omar did not know why he had been arrested. Interrogators would later force him into a false confession of forgery.

In Tartus he was tortured with electrocution – to his neck, arms, legs, and genitals. On another occasion, prisoners were force-fed salt before being offered water as a relief from the thirst.

But their penises were then tied up, preventing them from urinating and causing intense kidney pain.

He was then moved to Branch 215, known as the “Raid Brigade,” on 6 May Street in Damascus, less than 5km from the Umayyad Mosque and in an area surrounded by shopping centres and hotels.

Omar would spend the next year behind its walls.

Omar began to know the meaning of hunger: the prisoners often went without food for days; when it came it was a few potatoes and eggs, often covered in blood or mould. “It continued for months,” Omar said. “People were crying from hunger.”

There was always extra torture on celebratory days, such as the Muslim festivals of Eid al-Fitr and Eid al-Adha, and Mother’s Day. Torture parties, Omar called them.

The boy’s father was killed in the al-Bayda massacre in May 2013, in which hundreds of Sunnis were murdered. Omar’s cousins Bashir and Rashad, who had been arrested alongside him, both died in prison.

But there was not the energy to be sad for their deaths. Instead, Omar created a family for himself in Branch 215. “It was the best university,” he said.

Prisoners came from many backgrounds and nationalities. They shared skills, professions and languages. They taught themselves how to divide their tiny food rations with threads from the military uniforms they were forced to wear, and how to kill the lice that crawled over their bodies.

But over time both were taken away by officers and had their toes burnt off with acid and their eyes pulled out. Neither one was seen alive again.

Omar’s final prison was the notorious Sednaya jail, north of Damascus. The “welcome party,” as the man, now 21, described it with a bleak smile, involved beatings with metal parts from a tank. “That alone was like two years in Branch 215,” he said.

One of his many "duties" was helping to dispose of the corpses of dead inmates. He once saw a room full of bodies, with none of the usual signs of torture. Instead, there were large wounds where their hearts, livers and kidneys once were.

Organ harvesting appeared to be taking place on a large scale.

Praying and reading the Quran were banned, so Omar drew its chapters (surah) and verses (ayat) in his mind. He composed poetry and songs, which to this day he can recite without fault, even as he copes with new challenges of learning Swedish – in which he is now nearly fluent – and working in Stockholm.

He was only able to escape to Europe because his mother paid Syrian security officers a $15,000 bribe.

Omar weighed 35kg on his departure from prison – he has recovered this to 53kg. His lungs were scarred from the tuberculosis that he contracted in Sednaya. He is thankful for the tuberculosis, in a dark way: when he vomited blood in front of any police officers as he fled Syria and Turkey, they fled, fearful of contracting the disease themselves.

Omar said he was now “very happy,” “very good”. But he misses his mother and siblings in Turkey, and his family of fellow inmates – both those who died and those who are still in their living hell.

Omar repeated again and again, “Welcome to Syria.” He wishes the world could know what it meant.

'Death is an escape from the pain'

Yehia Rashid al-Salim from Palmyra can still feel the pain of the beatings. Now in Greece, hoping for resettlement in Europe, he lives with obvious physical scars of torture, which he showed to MEE. What he could not show are the grim memories gripping his mind.

"It would have been impossible for us to riot like prisoners at Hama or Suwaydah," he told MEE, referring to recent outbursts of violence and protest at two notorious Syrian prisons.

Yehia was held at a military security centre where the possibility of protest was next to zero. “No one dared to strike,” he said. “I hope Hama detainees succeed in their strike – but this is impossible against the regime's criminal predator security forces.”

The former employee of the agriculture ministry was arrested in Palmyra – known as Tadmur in Arabic – while visiting his uncle on 19 October 2013, just after the celebration of Eid al-Adha.

He was taken to the Military Security Branch and tortured for 22 days. He was accused of the apparent “crime” of meeting the Free Syrian Army in Raqqa. He told his interrogators that the claims were false.

Yehia, who has three children aged 12, 10 and six, told MEE that he was subjected to the “al-Shabah” torture method: a prisoner’s hands are shackled and he is suspended from the ceiling of his cell, feet centimetres from the floor. Then he is beaten.

He was then transferred to the military police branch in the city of Homs, and then to the notorious “Palestine Branch” prison in Damascus, where he was tortured three or four times a day.

Life inside the cell was “revolting”. People were forced to remain naked and infectious diseases spread quickly. Tuberculosis, lice and scabies caused infections and death on an almost daily basis.

“The jailer would enter and ask how many dead there were that day,” Yehia said. “We put the bodies by the door of the cell, where they were taken to an unknown location.”

The lucky prisoners died, Yehia says, because death was a blessed escape. “I wish death upon the detainees at every turn. It is an escape from torment and pain, from the hunger and oppression and humiliation and torment and humiliation, from everything inside.”

In the police hospital, Yehia was diagnosed with tuberculosis. Illness proved to be his escape ticket - he was released on 12 June 2014, after a new rule was brought in to free some prisoners with critical health conditions.

Other clinics refused to take him because he was a former prisoner: staff were afraid of the security forces. When he was strong enough, Yehia fled the capital, and recuperated in Tadmur.

But by then IS was threatening the city, and so he fled to the northern province of Idlib. Months later, Yehia ended up in Idomeni camp, the makeshift city home to 10,000 refugees on the Greece-Macedonia border that was closed down in May.

Upon his arrest he weighed 92kg; even after some recovery time since leaving prison, he now weighs just 67kg. He suffers back pain and nerve damage in his hands and feet due to the severe beatings.

“There are scars and marks on my back to the present day. I wish to show the violations of this criminal regime. Until now I have not had the opportunity. I want the world to see what is happening: the Assad regime's violations against detainees.”

Omar and Yehia are just two of the tens of thousands of people who have been held in government prisons in Syria, before and during the current conflict that began in March 2011.

More than 12,500 people have died under torture in prisons in the past five years, according to the Syrian Network for Human Rights.

The government of Bashar al-Assad is responsible for 99 per cent of those victims, according to a special report that the monitoring group released in June. Other civilians – including women and children – have died at the hands of the Islamic State group and Jabhat Fateh al-Sham, formerly the Nusra Front.

The evidence of torture and death in Syrian government prisons keeps rolling. A February report from the UN Commission of Inquiry on Syria, “Out of sight, out of mind," concluded that the government’s actions amounted to war crimes.

Prisoners have been “beaten to death, or died as a result of injuries sustained due to torture,” it said.

“The government has committed the crimes against humanity of extermination, murder, rape or other forms of sexual violence, torture, imprisonment, enforced disappearance and other inhuman acts.

“Based on the same conduct, war crimes have also been committed,” it said.

International human rights law says that governments must investigate the deaths of prisoners under its control, and the state in question can be held responsible for the deaths if it fails to do so.

Murder, torture, and execution without due process are banned under the 1949 Geneva Conventions, to which Syria is a party.

But under national law, the country grants vast immunity to its security services and police as well as to the president. The UN report concluded that deaths occurring in prisons “must have been known among military superiors at the highest levels".

Death certificates claiming that prisoners have died of “natural causes” or a “heart attack” are issued to family members, who are often prevented from retrieving their relatives’ bodies. The corpses are often believed to be buried in mass graves.

The commission report said this was part of a “centralised, systemic” procedure that is “effectively concealing systemic detainee abuse and evidence of criminal conduct by state agents.”

The findings of the Syrian Network for Human Rights also tally with those of the UN Commission, which interviewed 621 people, and the testimonies of Omar and Yehia. The group accuses the Syrian government of denying torture and blaming arrests made on al-Qaeda and other militant groups.

The group's chairman, Fadel Abdul Ghani, said: “We are still waiting for the free world to take the next stop in order to protect humanity in Syria, now that this mechanism is exposed.” 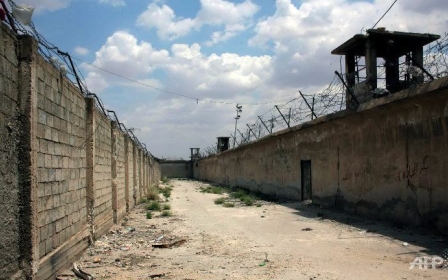 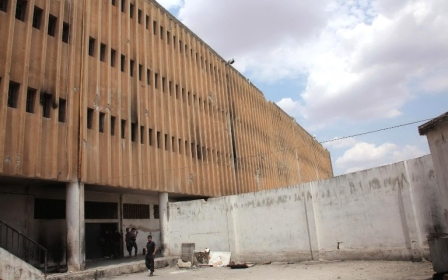 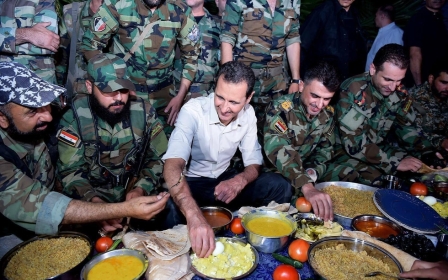