Ilhan Omar calls for Trump to be impeached after racist comments

US president invoked support for Israel to defend his remarks, in which he called for congresswomen to 'go back' to their countries of origin US Congresswoman Ilhan Omar hit back at US President Donald Trump's "white nationalist" agenda on Monday after he called on several Democratic Representatives of colour to "go back" to their "crime-infested" countries of origin.

Omar was joined by three other US representatives - Alexandria Ocasio-Cortez, Ayanna Pressley, and Rashida Tlaib - to condemn Trump for his racist tweets and demand the president be impeached for his actions.

During the press conference Omar also listed previous comments made by Trump both publicly and privately about African nations, people of colour and women.

"It is time for us to stop allowing this president to make a mockery of our constitution... It is time to impeach the president," said Omar.

In an interview with Middle East Eye last month, Omar described Trump's election as unearthing a "lot of ills that we have decided to not speak [about] in our society, in the ugliest way".

"And there are a lot of people who want to whitewash [that] and I think we have to be very consistent in calling them out, regardless of whether it makes people uncomfortable or not."

Trump meanwhile has invoked his support for Israel as a means to defend himself against accusations of racism and xenophobia, doubling down on comments made this weekend against the four Democratic Party representatives.

On Twitter on Monday, the US president called on "radical left congresswomen" to apologise not only to himself and the United States, but also to the people of Israel "for the foul language they have used, and the terrible things they have said".

"If Democrats want to unite around the foul language and racist hatred spewed from the mouths and actions of these very unpopular and unrepresentative Congresswomen, it will be interesting to see how it plays out," Trump said.

"I can tell you that they have made Israel feel abandoned by the US." 'If he shouted it at a Muslim woman in Wal-Mart he'd be arrested': Trump slammed over racist rant
Read More »

The president's Israel defence follows comments he made on Sunday against the same congresswomen, who all come from immigrant backgrounds, calling on them to "go back" to the "crime-infested places from which they came".

While Trump did not name anyone directly, his comments were interpreted to refer to the four congresswomen - Omar, Tlaib, Ocasio-Cortez and Pressley - who were elected to the US House of Representatives last year and have been some of his most prominent critics.

Somali-American Omar and Tlaib, who is Palestinian-American, are the first two Muslim women ever elected to the US Congress. Ocasio-Cortez's parents are from Puerto Rico, and Pressley is the first African-American congresswoman elected to represent a district in Massachusetts.

"We all know that AOC and this crowd are a bunch of Communists, they hate Israel, they hate our own Country," Trump tweeted on Monday, using a nickname for Ocasio-Cortez.

'Distract from his lying and racism'

Omar and Tlaib, in particular, have been the most critical of Trump's relationship with Israel, and as such, have come under a litany of attacks and accusations of antisemitism since they took office.

But Trump has touted his pro-Israel positions as a way to give himself cover amid accusations he is racist or courting white nationalists.

He has also used Israel as a way to heap pressure on the Democratic Party, as some progressive members are moving away from unconditionally backing the Israeli government.

"The Democrats have very much proven to be anti-Israel," Trump told reporters in March.

"There's no question about that. And it's a disgrace. I mean, I don't know what's happened to them. But they are totally anti-Israel. Frankly, I think they're anti-Jewish." Some major pro-Israel groups in the US have remained mum when the president has made xenophobic statements - instead, calling him a great friend of Israel and Prime Minister Benjamin Netanyahu.

However, on Monday, others criticised the president's invocation of Israel, saying it is meant to "distract from his lying and racism".

"The fact that Trump thinks all he has to do is shout 'Israel' to distract from his lying and racism speaks volumes about how he and the right-wing regard it as little more than a political tool to be used for partisan purposes," tweeted Dylan Williams, senior vice president of government affairs at the pro-Israel lobby group J Street.

Trump's tactic, however, is not uncommon in American politics, where an official's support for Israel is often used as a way to deny racist comments or views.

Republican Representative Steve King, for example, has come under fire for promoting white nationalist and Islamophobic policies since he was elected in 2003.

Last year, he was accused of sharing the ideology of the man who shot and killed nearly a dozen Jewish worshippers at a Pittsburgh synagogue.

To defend himself, King said it was "not tolerable" to be accused of such a thing because he has been "a person who has supported Israel since the beginning".

On Monday, Michael Koplow, policy director at the Israel Policy Forum, a Jewish-American organisation that supports a two-state solution to end the conflict, said Trump's use of Israel to defend racist rhetoric was dangerous.

"Any responsible Jewish leader will vigorously denounce Trump's attempt to link his own vile racism with some sort of defence of Israel," Koplow said on Twitter.

"Not only is it disgusting on the merits, it is the most surefire way to cause support for Israel to plummet in the US as quickly as possible."

Rabbi Jill Jacobs of T'ruah, a left-leaning rabbis' human rights group, said Trump's series of tweets "has nothing to do with Israel".

"It's about your behaviour toward American citizens and congresspeople," she wrote. "Please don't try to cover up your racism by making Israel a wedge." 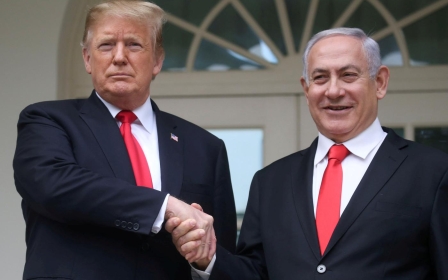