The head of Iraq's controversial state-sponsored militias has announced the closure of registration centres for the units across the country and requested an extension to the Wednesday deadline for the integration of the armed groups into the state's apparatus.

Iraq's prime minister Adel Abdul Mahdi first issued the order for the Popular Mobilisation Units (PMUs) - known as Hashd al-Shaabi in Arabic - to integrate with the regular army on 1 July, following a number of attacks on US interests in the country that were blamed on the militias.

Falih Alfayyadh, chairman of the PMUs, told reporters on Tuesday that recruitment centres for the organisation were to be closed - but that the overall process would requirement a two-month extension.

“We ask the Iraqi prime minister for a two-month extension of the deadline in order to finalise the integration of all the Hashd al-Shaabi units into Iraqi army."

The PMUs were officially created in 2014 after an appeal by Ali Sistani, the most senior Shia cleric in Iraq, for citizens to rally to the defence of the country against the Islamic State (IS) group, which had recently seized the city of Mosul.

While some of the units were created in 2014, a number of the largest were pre-existing groups - such as Kataib Hezbollah and the Badr Organisation - which were backed by Iran.

Although popular among a large number of Iraqis for fighting gainst IS, they have been accused of carrying out sectarian abuses against the country's Sunni minority, while their power has often been seen as outstripping that of the regular armed forces.

Part of Mahdi's decree said that in the future the PMUs would have to make a choice between military and political work, whether “on an individual or organizational level”. “All other names under which the factions of Hashd al-Shaabi operated during the heroic battles that eradicated the Daesh (IS) terrorist entity will be abandoned and replaced with military terms (division, brigade, regiment, et cetera),” said the decree, according to Rudaw.

Bases, checkpoints, economic offices and other entitites outside the “new working framework” would need to be closed.

The move to constrain armed groups in Iraq came after a number of attacks in June targeting American interests in the country, including an attack on an oilfield in Basra, and an attack near the US embassy in Baghdad.

The US has, in recent months, moved to place greater sanctions on PMU members as tensions rise with Iran over incidents in the Gulf.

In mid-July, the US placed sanctions on the leaders of two non-Shia PMU groups - Rayan al-Kildani, head of the Christian Babylon Brigade, and Waad Qad, head of the Shabak 30th Brigade, an organisation comprised of members of the tiny Shabak Muslim minority.

Slamming the sanctions on Tueday, Alfayyadh said: “We refuse the US treasury sanctions, because they have no evidence and they clearly are humiliating Iraqi sovereignty.”

A number of leaders of the PMUs have welcomed Mahdi's decree, including Qais al-Khazali - leader of the Iran-backed Asaib Ahl al-Haq - and the influential cleric Muqtada al-Sadr.

Renad Mansour, an analyst with the Chatham House think-tank, wrote in Foreign Policy that the conciliatory attitude from PMU leaders could be an indication that they believe the new move will allow them to "consolidate power from within the state".

"Although the new policy mandates that the PMF integrate with the Iraqi state, it does not require their subordination," he wrote.

"If anything, the risk may be that the state is subordinating itself to the paramilitary groups, not the other way around." 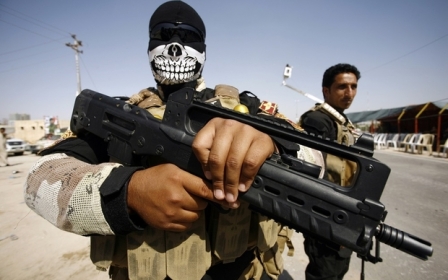