Iraqi Prime Minister Haider al-Abadi was set to travel to Basra on Monday in an attempt to calm the situation in the province, which has been wracked by unrest for two months.

It comes as the two largest factions in the Iraqi parliament united in calls for Abadi to resign after failing to resolve the problems in southern Iraq, which has been plagued with polluted water and electricity shortages.

More than 30,000 people have been hospitalised as a result of pollution in the city's water supply.

Although Abadi pledged extra funds for Basra at a special parliamentary session on Saturday, he has faced harsh criticism from senior politicians and society leaders.

Members of the Sairoun Alliance - affiliated with Shia cleric Muqtada al-Sadr - and of the Fatah Coalition - composed of members and supporters of the Hashd al-Shaabi paramilitary units - demanded that Abadi resign during the session.

Basra governor Asaad al-Eidani, who chaired the session, also slammed Abadi, blaming him for not tackling corruption in the province.

“Basra is burning. What we hear from the ministers is like we live in another world. I have persistently said it in the past and say it again that the police commander takes bribes. But no one listened to me,” he said.

In response, Abadi said the session had been "blatantly exploited" for the purpose of political point-scoring.

Hassan al-Aqouli, spokesperson for Sairoun, reiterated the call for Abadi to resign on Sunday.

“We demand the government apologise to the people and resign immediately,” he said, during a press conference.

“Frankly, the answers weren’t convincing on part of the ministerial cabinet...in the face of this crisis that leaves martyrs and injured in its trail daily."

Attempts to form a new government in Iraq since the ratification of the 12 May parliamentary elections have so far stalled. MPS in the new parliament failed to elect a speaker last week and were set to reconvene again on 15 September to continue the process.

Although Abadi and Sadr had announced a formal parliamentary alliance to form a new government, the anger over the unrest in Basra has led to rumours of a Sairoun-Fatah alliance.

Falih al-Khazali, a Fatah MP, told Baghdad Today on Sunday that talks between Sairoun and Fatah to sideline Abadi in favour of a new prime ministerial candidate were underway, though the leadership is yet to confirm anything.

On Monday, Ali Sistani - the most senior Shia religious leader in the country - said the post of prime minister needed a "new face" and said the religious establishment was not supporting “politicians who have been in authority in the past years”.

He denied the accuracy of statements made over the weekend which suggested that Sistani had specifically sought to exclude a number of senior politicians from the role and instead insisted that the job of picking the prime minister was for the parliament.

Edward Maki Shaker, one of the demonstrators in Basra, told Middle East Eye last week that politicians in Baghdad were too corrupt and self-interested to affect any change in Basra.

He also criticised what he saw as Sadr's and others' attempts to portray themselves as the voice of the street over the demonstrations.

"This is the street - now everyone wants to become the leader of the reform," he said. "There is no reform leader and we deny this because the people have faced poverty and oppression for 16 years.

"We are governed by a group of criminals." 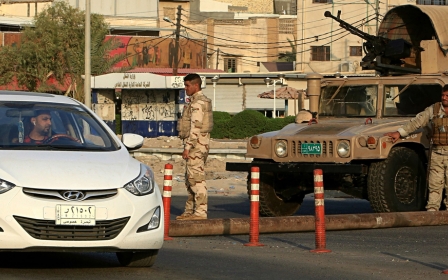