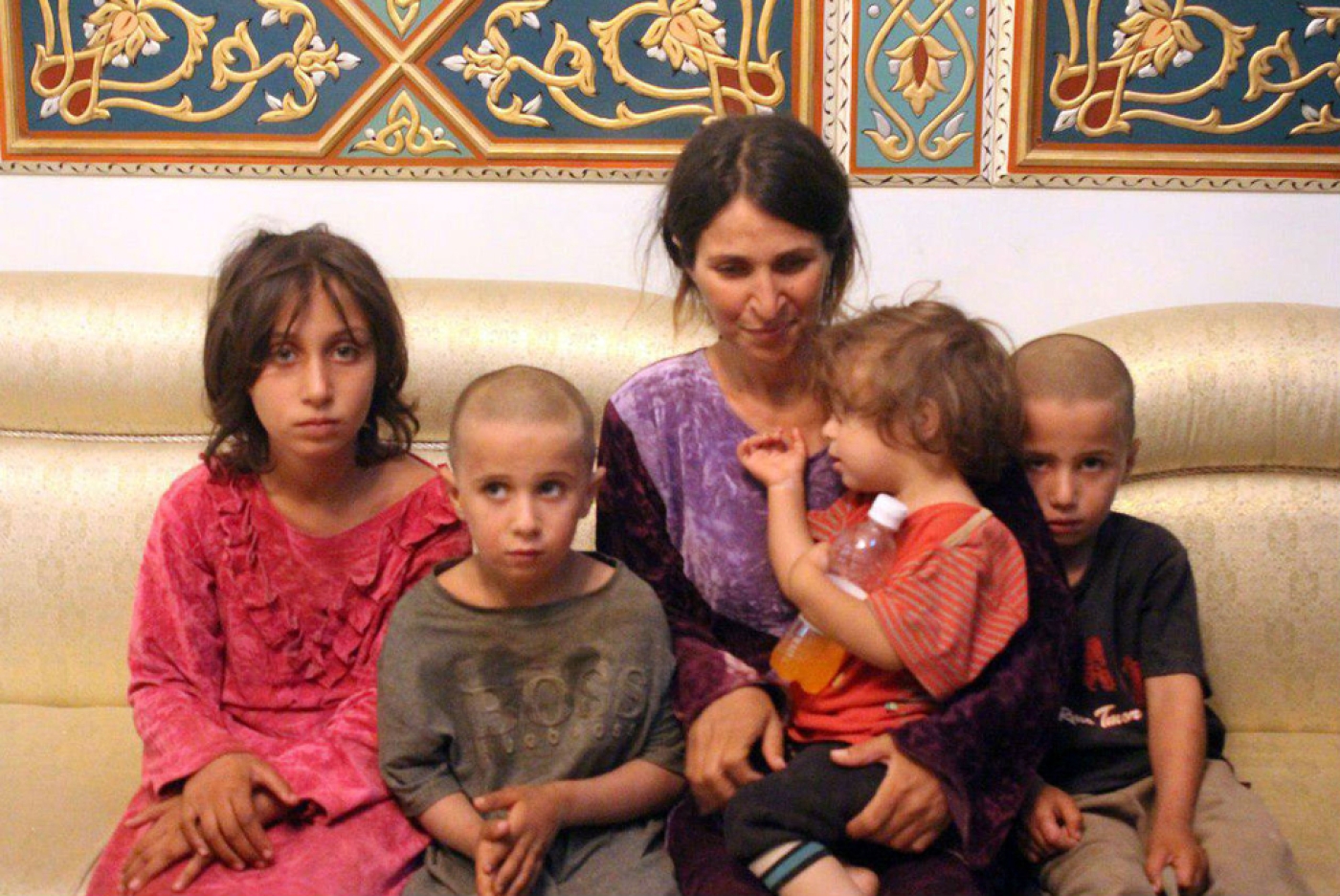 The Islamic State (IS) group has released two women and four children among 27 surviving Druze hostages it seized during a deadly July attack on the minority community's heartland in southern Syria.

State television broadcast footage of the six arriving in the city of Sweida on Saturday, joyful at being reunited with their families but haggard after their three-month ordeal.

The Syrian Observatory for Human Rights, a UK-based activist group, said their release was the first part of a deal that would see Syria free at least 60 IS members and pay a $27m ransom.

IS abducted around 30 people, mostly women and children, from Sweida province in late July during the deadliest attack on Syria's Druze community of the seven-year civil war.

As negotiations for their release dragged on, families led a series of protests outside government offices in Sweida to demand more be done.

I cannot describe my joy. But it is incomplete, my son has not yet been released

"I cannot describe my joy," Rasmia Abu Amar told state television after being reunited with her husband.

"But it is incomplete, my son has not yet been released," she said.

A second woman appeared with her four children, their clothes still dirty from their long captivity and her sons with their heads shaved.

Observatory head Rami Abdel Rahman told the AFP news agency that the six were freed on Friday night and that further hostage releases were expected "in the next few days or hours".

He said that in return for the release of all of the hostages, the Syrian government had agreed to free 60 Islamic State group prisoners and pay a ransom of $27m.

"Nine IS women prisoners held by the regime have already been handed over to the group along with seven children," Abdul Rahman said.

During the coordinated assaults on 25 July, IS carried out suicide bombings, shootings and stabbings that left more than 250 people dead, most of them civilians.

Sweida province is the heartland of the country's Druze minority, which made up around three percent of Syria's pre-war population, or around 700,000 people.

Followers of a secretive offshoot of Islam, the Druze are considered heretics by IS.

The group executed a 19-year-old male student among the hostages in August and then a 25-year-old woman in early October. IS said a 65-year-old woman being held by the group also died from illness.

Negotiations between regime ally Russia and IS for the release of the hostages had stalled.

But the latest round of talks appeared to have paid off, albeit it with a stiff price.

The Observatory said IS had also demanded the halting of an offensive against them in Sweida.

Government forces have battled IS fighters in the volcanic plateau of Tulul al-Safa in the east of the province since the July attack, AFP reported.

Abdul Rahman said the Syrian Democratic Forces, a Kurdish-led alliance that controls areas of the north and northeast with the support of a US-led coalition, "should also release some IS detainees" but he did not specify the number.

There was no immediate comment from the SDF, which has been taking heavy casualties fighting IS in its last pocket of control in eastern Syria, around the Euphrates valley town of Hajin.

On 10 September, the group launched a major assault on the area, where they estimate some 3,000 IS fighters are holed up. Hundreds of the fighters have been killed, but at the cost of scores of SDF dead.

Coalition air strikes on IS targets around the Hajin pocket killed at least 41 civilians, 10 of them children, on Thursday and Friday, the Observatory said.

Syria's grinding civil war has claimed more than 360,000 lives since it erupted with the bloody repression of anti-government protests in 2011.

A caliphate which IS proclaimed across large parts of Syria and neighbouring Iraq in 2014 has crumbled in the face of multiple offensives against them, but they remain a potent force.