Amiram Ben-Uliel was found guilty of killing three Palestinians, including an 18-month-old child, in 2015 in the West Bank village of Duma Amiram Ben-Uliel, 25, was convicted in May on three counts of murder and two counts of attempted murder for killing three members of a Palestinian family (AFP/File)
By
MEE staff

An Israeli court on Monday issued a triple life sentence against an extremist settler convicted of killing a Palestinian family in an arson attack in the occupied West Bank in 2015.

Amiram Ben-Uliel, 25, had been convicted in May by the Lod District Court on three counts of murder and two counts of attempted murder, in a ruling that the Shin Bet internal security service described at the time as "an important milestone in the battle against Jewish terror".

On Monday, he received three life sentences for the above charges, as well as 40 years over other crimes.

The court also fined Ben-Uliel 258,000 shekels ($74,450), to be awarded in compensation to Ahmad Dawabsheh, the child who narrowly escaped the arson attack and sustained severe injuries for which he is still receiving treatment. The high-profile attack caused local and international outrage, as it claimed the life of 18-month-old Ali Dawabsheh, his parents Saad and Riham, and orphaned his brother Ahmad, then four years old, who was left with severe burns all over his body.

According to the indictment, Ben-Uliel staked out homes in the village of Duma to attack, settling on the Dawabsheh home, based on the assumption that people were inside the house at the time of the attack.

Ben-Uliel first threw a Molotov cocktail into an empty home, before throwing another one through the Dawabshehs' bedroom window while they were sleeping. He also spray-painted “Revenge” and "Long Live King Messiah" on the walls of the home before the attack.

Riham's father, Hussein Dawabsheh, who is also the guardian of his grandson Ahmad, said following the verdict that "the sentence will not bring anything back".

His grandson, the sole survivor of the fire, lost his ear in the attack. He is now unable to wear a mask like the other children, his grandfather said.

"Why did they do this to me, Why am I not like all other children?" Hussein quoted his grandson as saying, Haaretz reported.

In its ruling in May, the court had acquitted Ben-Uliel of belonging to a terrorist organisation, a move the Dawabsheh family described as offensive.

Ben-Uliel belonged to the “hilltop youth” group, a movement of radical, ultra-nationalist Israeli settlers who sought to settle land in the West Bank - which they believed was rightfully given to them by God - at all costs, including violence.

'The sentence handed down today is significant for the family and for the Palestinian people, given that the majority of crimes committed by settlers against Palestinians never reach the courts'

While the indictment stated that on the night of the attack Ben-Uliel acted alone, several reports at the time quoted eyewitnesses as saying that they saw at least two masked men fleeing the scene of the attack.

An unidentified suspect, who was a minor at the time of the attack, struck a plea deal and was charged only with conspiring to commit the attack, despite evidence reportedly indicating that his role was essential in carrying out the deadly arson.

The Dawabsheh family said in May that Ben-Uliel's conviction was “not enough”.

“This will not bring us back our family, it will not bring back Ahmad’s father,” Naser Dawabsheh, the brother of Saad Dawabsheh, told Middle East Eye in May. “One person was convicted … but the rest of them still live on illegal outposts surrounding our villages, posing a threat to our communities every day."

According to Haaretz, Ben-Uliel's wife, Orian, said after Monday’s judgment: "The judges did not seek justice and truth, they decided to convict my husband at all costs, despite all the evidence showing that my husband did not do it … we are now preparing for the Supreme [Court]. I do not know how the judges sleep at night, what can be called judges. The killers roam free."

Yousef Jabareen, a representative of the Arab Joint List in Israel's parliament, welcomed the sentence, while noting that continued anti-Palestinian rhetoric by Israel leaders was responsible for fostering a climate in which such deadly attacks occured.

"The sentence handed down today is significant for the family and for the Palestinian people, given that the majority of crimes committed by settlers against Palestinians never reach the courts," Jabareen said in a statement on Monday.

"However, top government officials have led ongoing incitement campaigns agitating for political assassination and have generated an atmosphere of racist hatred. This ruling does not absolve them of responsibility for these acts. 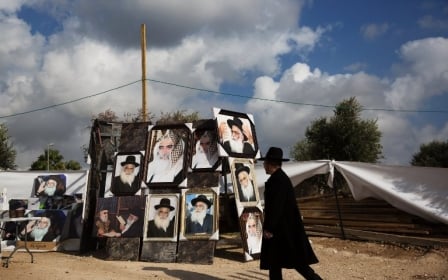