'It's time for a change': Anti-slavery activist Biram seeks power in Mauritania election

Carrying the hopes of Mauritania's black Haratin community on his shoulders, presidential candidate vows to end enslavement and lift people out of poverty 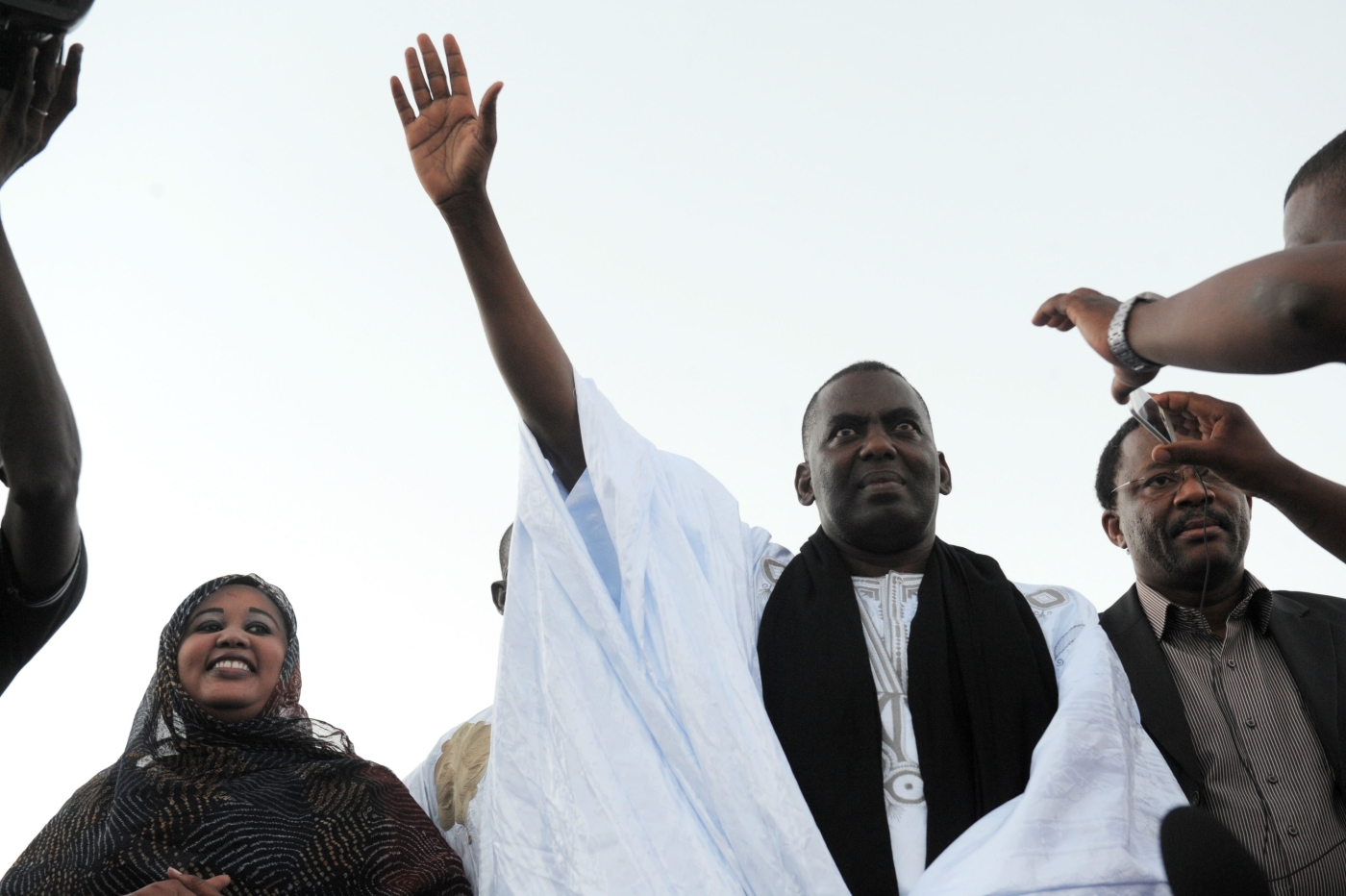 Mauritania opposition politician, presidential candidate, and anti-slavery activist Biram Dah Abeid waves at supporters as he takes part in a final campaign rally in Nouackchott, on 19 June (AFP)
By
Amandla Thomas-Johnson
in
Nouakchott

Mauritanian presidential candidate Biram Dah Abeid had been giving a speech in the sandy playground of a school-turned-voting station minutes after casting his vote in Saturday's presidential election, when he was suddenly interrupted.

Biram has become an inspiration for Mauritania's blacks, which at some 60-70 percent make up the majority of the country's population.

His campaign speeches promising liberation for thousands of black slaves, and in favour of providing jobs and better schools, have struck a chord with black communities who are often poor and face discrimination.

Born to a mother who was a slave at the time of his birth and an ex-slave father, he belongs to the Haratin community, poor descendants of African slaves, which are the largest, but also the most disadvantaged, of the ethnic groups comprising Mauritania's hierarchical society.

Those drawn from African tribes, also found in neighbouring Senegal, make up the rest of the black population.

Minutes before, Biram had emerged from a voting booth - little more than the narrow space between a concrete wall and a green curtain tied precariously to a classroom blackboard. The candidate patiently eyeballed each camera pointing at him, then slowly put his voting card into a box.

Out in the school playground in the Nouakchott suburb of Riyad, surrounded by a swathe of elbowing supporters, he decried the current government.

"The regime is dividing the people and is corrupt. It's time for change," he said, exuding a dignified confidence and wearing a white boubou, a long loose-fitting garment whose collar was trimmed with pale gold thread.

"The system is corrupt. The regime has instituted injustice," he carried on in a measured tone.

The regime is dividing the people and is corrupt. It's time for change

"I'm ready to stay with the people if they suffer injustice or poverty. I'm ready to serve the people," he said, before the crowd dispersed with shouts of "Allahu Akbar".

Biram, who has served long spells in prison for his anti-slavery activism, has been able to garner an international human rights reputation for his work, which includes challenging the Islamic religious justification for slavery and demanding the prosecution of slave owners.

He claims to have been inspired by his formerly enslaved father to spend his life fighting against the practice.

But as much as he is loved here, he is seen by some as a radical outlier who wants to divide Mauritanian society.

Much of that criticism has come from the White Moors, powerful Arab-Berbers who sit at the top of Mauritania's socio-economic pyramid and who have a legacy of slave ownership over Haratins.

Asked about the criticism levelled against Biram, spokesperson Hamady Lehbouss, said: "Only those who have not suffered from it can speak like that.

"Those who say this are the ones who benefitted from slaves keeping their herds or cultivating their fields while their own offspring went to schools.

"Today, eradicating slavery makes them lose their privilege. They should have shared when they had everything."

Heading along Kennedy Avenue in south-central Nouakchott, the city changes drastically. Gone are the palm-lined boulevards, the weighty 4x4 cars and the smoothie shops.

A ramshackle market sprawls along both sides of the road, with huge piles of second-hand clothes on the ground and rickety stalls selling fruit threatening to encroach on cars passing by. Most here are blacks who live in nearby Nouakchott slums, low-lying dwellings set on cratered roads that donkey carts often rattle along.

It was in one such suburb, El Mina, that Biram ended his campaign on Thursday, with a speech promising to improve the lot of the poor Haratin that sent the crowd into raptures.

"Biram, Biram," chanted a gesticulating mass of mostly young men, some reaching out to touch his car as it departed, others spilling onto the streets, narrowly avoiding passing trucks, which flashed their lights and honked their horns as they rolled through the dimly lit El Mina neighbourhood.

"Biram can give us work," said 31-year old Bouna Adullahi, who says he has a Baccalaureate qualification but is unable to find a job.

Soon a crowd of young Haratin men begin to circle, who are all eager to have their voices heard, jumping in at the same time when asked what the major problems they face are.

Lack of jobs, poor educational opportunities, social inequality they say, jostling to get a word in.

"The future is with him. There is too much injustice," said 37-year-old Abu Diop, who said he was unfairly made to wait in prison after he had been cleared of committing an offence.

Eighteen-year-old Fatoumata Hussein wants equality for all Mauritanians, regardless of ethnicity, and added: "I want women and men to have the same rights, to be able to work and study."

Despite being the largest ethnic group, many Haratin lack unemployment and attend schools which are understaffed and overcrowded.

White Moors acknowledge that successive governments haven't done enough to improve their lot, but few are prepared to admit that some are still slaves. 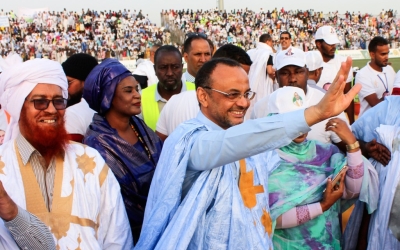 Estimates vary, but according to the Global Slavery Index there are 90,000 slaves in Mauritania, or two percent of the population - men and women who work without pay, whose children are born in captivity, and who can be bought and sold at will.

Dicko Dicko, general secretary of the France-based Haration Association of Europe, a Haratin-rights organisation, said that despite being the largest ethnic group in Mauritania, Haratin are "victimized and constitutionally unaccepted citizens," making their discrimination harder to detect.

"The constitution only recognises Haratin under the Arab category,  but the Haratins are not Arabs, they are black Africans who lost their culture owing to the slavery. We're fighting for the official recognition of the Haratin as a free community."

Biram has put the abolition of slavery at the front and centre of his electoral campaign.

According to Dicko, other candidates are paying only lip service to abolishing the practice, which has been officially outlawed since 1981, making Mauritania the last country in the world to ban it.

"Unfortunately the other candidates just talk about this issue superficially. Biram has experienced social issues in his childhood and is able to really help the victims of this barbarity."

Another law in 2007 criminalised the practice, recommending stiff sentences of up to 20 years. But some convicted slave owners have served as little as six months in prison.

Asked what chances the Haratin have of turning the election in Biram's favour, Dicko is cautious.

"Haratin will vote in order to change their situation. But many don't vote because they are enslaved and don't have ID cards or documents," he said.

"Even if they could vote, they would vote for their masters, because they are property."