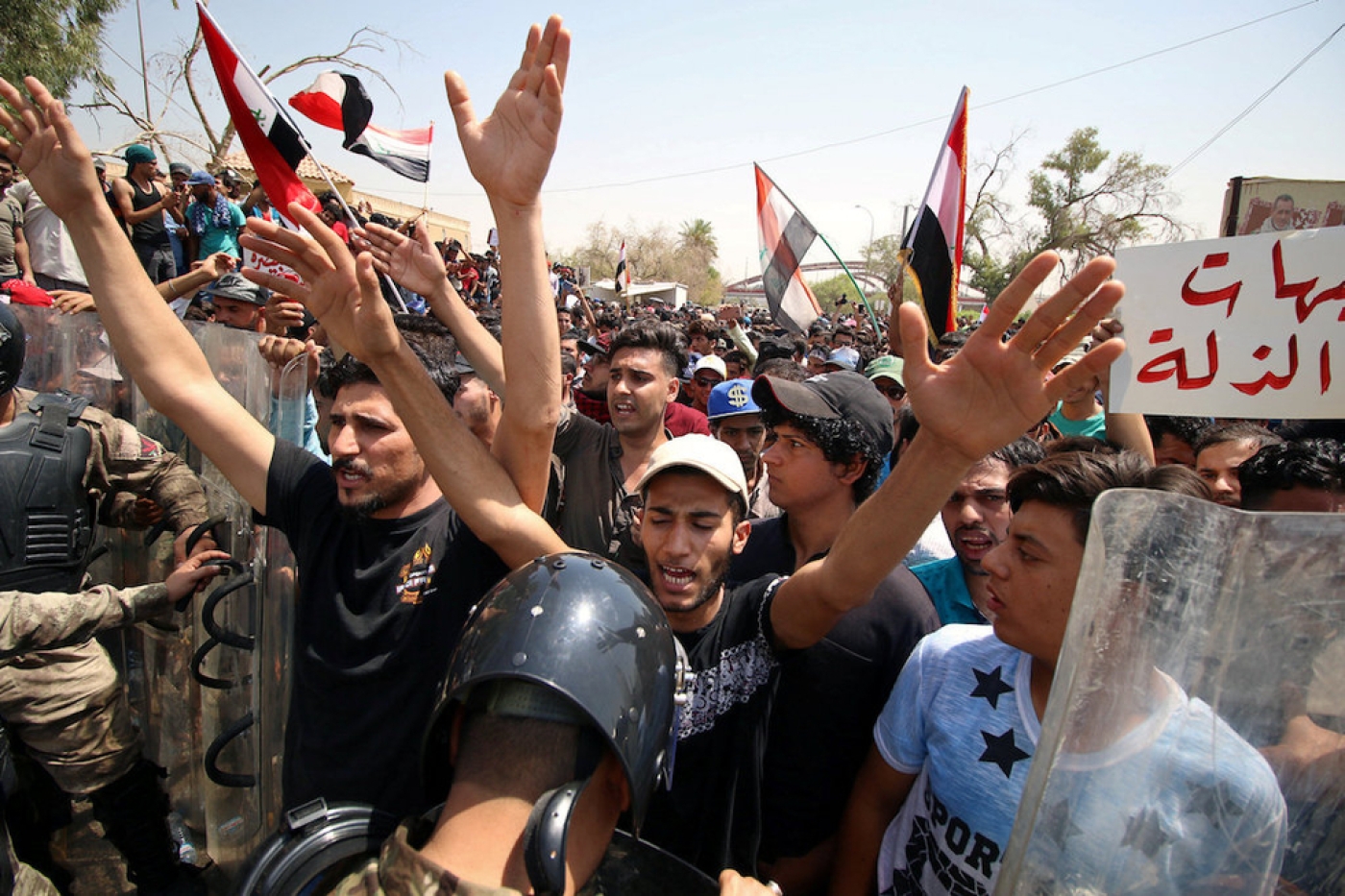 Reports indicate that at least five people have been killed since the beginning of protests in southern Iraq a week ago, as thousands continued to take to the streets to complain about unemployment and a lack of public services, including electricity and drinking water.

Demonstrations which began in the city of Basra on 8 July have spread to the provinces of Dhi Qar, Maysan, Babil, Karbala and Najaf, with the Iraqi government imposing a state of emergency as local government buildings were torched and security forces opened fire on protesters.

A police official told Reuters that two protesters had been killed on Sunday after local forces used live ammunition at a demonstration in Samawa, a city south of Baghdad.

"Hundreds of people tried to storm a courthouse. Shots were fired towards us. It was not clear who was shooting. We had no choice but to open fire," he said.

A health official in Maysan province also said that two people had been killed in the early hours of Sunday morning in the city of Amarah.

The death of a demonstrator in Basra last week was a major catalyst for the protests.

Scores have been wounded across the rest of Iraq as temperatures of more than 50 degrees Celsius stoked anger at a lack of drinking water and electricity in the resource-rich south.

The chief of police in Najaf reportedly resigned on Monday after refusing to fire upon protesters.

Yousif Alshamkhawee, a social media activist in Dhi Qar province, told Middle East Eye that tensions were running high in the provincial capital Nasiriyah and that the main streets had been closed following demonstrations.

He said that protesters had attempted and failed to burn a local government office and that security personnel had resorted to using force against demonstrators.

"I'm afraid about what the government and its militants could do," he said, adding that during previous protests in the city in 2015, government supporters had attacked demonstrators with knives.

"After cutting [internet] connections between us they might do anything."

On Monday, around 200 protesters gathered at the main entrance to the Siba natural gas field in Basra, according to police sources speaking to Reuters.

Security forces have been deployed around the oil and gas fields in order to prevent disruption of what is the Iraqi economy's lifeblood.

Prime Minister Haider al-Abadi ordered the mobilisation of nine Iraqi security forces regiments to Basra on Sunday, including three from the counter-terrorism Golden Division, who were the main force used in defeating the Islamic State group (IS) in Mosul earlier this year.

The government also restricted internet access across the country, as activists in Baghdad called online for a solidarity demonstration in the capital on Monday.

Abadi attempted to appease the concerns of protesters by announcing a "solutions package", including $3bn worth of investment and the deployment of thousands of civil servants. He also visited the province himself, in an attempt to show he was taking the issue seriously.

However, a video posted on social media appeared to show Abadi being escorted away by bodyguards as protesters stormed the hotel he was staying at in Basra.

Video allegedly shows Iraqi PM Haider al-Abadi being whisked away by bodyguards as angry protesters storm at the hotel where he stayed in Basra: #IraqProtests pic.twitter.com/50CN7WLdxx

Much of the anger has been directed against the major political parties in Iraq - the headquarters of Abadi's Dawa Party and buildings belonging to the Fatah Coalition (which is backed by powerful Iran-backed paramilitaries) have been torched by protesters in the south.

Anger has also been directed at Iran, which maintains enormous political and economic influence in Iraq. Last week, Abadi said that Iran, which used to provide 1,200 megawatts of electricity to Basra province, was experiencing a "load on the electrical grid" and as a result was only providing "5-10 percent of the amount", resulting in power cuts.

During protests in Nasiriyah, participants reportedly chanted: “Iran, Iran, we don’t want you anymore, Dhi Qar will not shut up anymore!”

Yousif Alshamkhawee said that protests in the city had been partly spurred on by Iran's decision to cut power to the province, just as temperatures hit new peaks. In addition, locals had long been angry about Iranian vegetable imports undermining local producers.

"And we cannot skip the Iranian support to Shia’a armed militants such as Asa'ib Ahl al-Haq and the Badr Organisation -  we all know about it but we can’t do a thing about that," he added.

"I think you know what those militants have been doing - so I don’t need to say details."

Iraq has been unable to form a government since elections on May 12, which were marred by accusations of voter fraud and a low turnout.

The Sairoun Alliance, a coalition of supporters of Shia cleric Muqtada al-Sadr and the Iraqi Communist Party, gained the largest number of seats in the election on a platform promising to tackle corruption and Iranian influence in the country.

Inside Iraq
EXCLUSIVE: US agrees to staged withdrawal of forces from Iraq, says negotiator
Inside Iraq
Iraqi paramilitaries feel the heat as Kadhimi steps up moves against them
Inside Iraq
Two rockets strike close to Iraq air base hosting US soldiers