On Raqqa's desert roads, water has become a weapon of war. Now a key battle for a Euphrates dam looms large in the assault on IS's stronghold A young YPG soldiers looks at the dead body of an IS fighter, a few kilometres away from Raqqa (MEE/Chris Huby/Agence Le Pictorium)
By
Matthieu Delmas

KOBANE, Syria – Two months since the launch of Operation “Wrath of Euphrates”, a US-led offensive to oust Islamic State (IS) fighters from Raqqa, their de facto Syrian capital, the Syrian Democratic Forces (SDF) continue to capture villages in the countryside west of the city and now have a key strategic target in their sights.

The goal of the first phase of operations, which was launched early last month, is to enforce a complete blockade of Raqqa city and to cut off IS supply lines from al-Bab region.

With the banks of the Balikh river to the north of the city already secured, the SDF’s coalition of Kurdish People’s Protection Units (YPG) fighters and Arab volunteers is now looking to capture the Tabqa Dam, downstream from Lake Assad, in a bid to encircle the IS bastion.

From the village of Jabar, a mere dozen or so mud brick houses, the fighters’ target is in sight.

"We have already covered a good 50 kilometres,” Farhan Abu Asker, a commander of the Liwa Thuwar al-Raqqa (the Raqqa Revolutionaries’ Brigade), told Middle East Eye, “and there are less than five more to go before we capture the dam.”

“This is our final position before we reach the IS front,” he added. “Our comrades liberated the village during the night. Tomorrow we are going keep moving towards the dam.”

Tabqa Dam, the second largest dam in the Middle East which provides the IS stronghold with electricity, is a major strategic challenge in the conflict.

Located 40 kilometres west of Raqqa city, it is crucial to the coalition’s operations, and exceedingly tricky to secure.

Bombing the infrastructure would be an ecological catastrophe for the Iraqi territories downstream of the river, and a humanitarian catastrophe for Syria too. If the dam is destroyed, vast territories in Iraq would be flooded and all of eastern Syria would be deprived of electricity.

Yet in remote villages throughout the region, IS fighters have systematically destroyed hydraulic infrastructures, the water towers in particular. And the damage is severe: water – and water regulation – is a major concern in these territories. 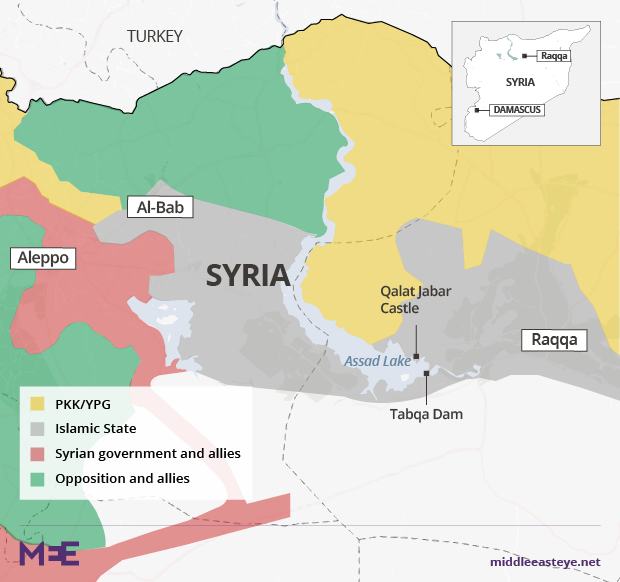 Indeed, subsistence here depends on the Euphrates, which supplies water for farming, so by destroying the water towers IS makes it difficult for the inhabitants to return.

Water is therefore a political weapon, as the operation codename, “Euphrates Wrath”, clearly suggests. As does the on-going operation called “Euphrates Shield”, launched in August by the Turkish army in an attempt to capture the city of al-Bab, east of Aleppo.

The second phase of operations will consist of taking the city itself. Under the agreement reached between internal SDF factions, the Arab brigades, and in particular Liwa Thuwar al-Raqqa, which enjoys strong popular support among the locals, will play a critical role.

The agreement aims to limit the influence of the Kurdish forces after the liberation of the city, by delegating the administration of the city to its inhabitants and limiting the SDF’s mission to security enforcement alone, during the transition period.

READ: The impact of war on Syrian water

Although Liwa Thuwar al-Raqqa announced its withdrawal from operations shortly after the offensive began, accusing Kurdish forces of reneging on their pledge that combat would be led by the brigade and that all fighters would be from Raqqa, Liwa Thuwar al-Raqqa troops were seen fighting alongside YPG fighters.

While the SDF certainly needs Liwa Thuwar al-Raqqa to legitimise its offensive on the city, the Arab brigade, which counts only a few hundred fighters, also depends on support in the air and on the ground from the wider US-led coalition.

In the muddy fields on the eastern bank of the Euphrates, rapid progress is being made. And for good reason: There is no natural cover for IS militants, forced to retreat against the relentless hum of US-led coalition drones, as air strikes by US bombers pave the way for SDF forces.

While coalition special forces advance on battle-scarred roads leading to the front, their mission in the region remains top secret. Media outlets are strictly forbidden in the vicinity.

According to US Defence Secretary Ashton Carter, ammunition as well as 200 additional special force troops have been dispatched to the region in support of the SDF, bringing the total number of US special forces in northern Syria to about 500.

“The coalition is supporting the SDF by providing training, advice, and logistical support. We are also providing material and air support, with targeted air strikes on jihadist positions,” he is quoted as saying.

The US-led coalition has this far provided the SDF with 50 tons of ammunition for the operation, including US-made 120 mm mortars.

Since the launch of the operation against the IS stronghold in Syria, the SDF have captured 97 villages to the north and the west of Raqqa. Last Friday, they took possession of the Qalat Jabar citadel, a ruin dating from the 11th century.

In Syria, in the wintertime, the bodies of IS fighters are kept at ambient temperature – and exhibited like trophies.

“That Daesh (IS) pig was a unit commander. This village is called Shebher. We liberated it on our way to Raqqa,” declared Ahmed Hussein, a young Arab fighter, heavy machine gun raised proudly to the sky and ammo belt over the shoulder.