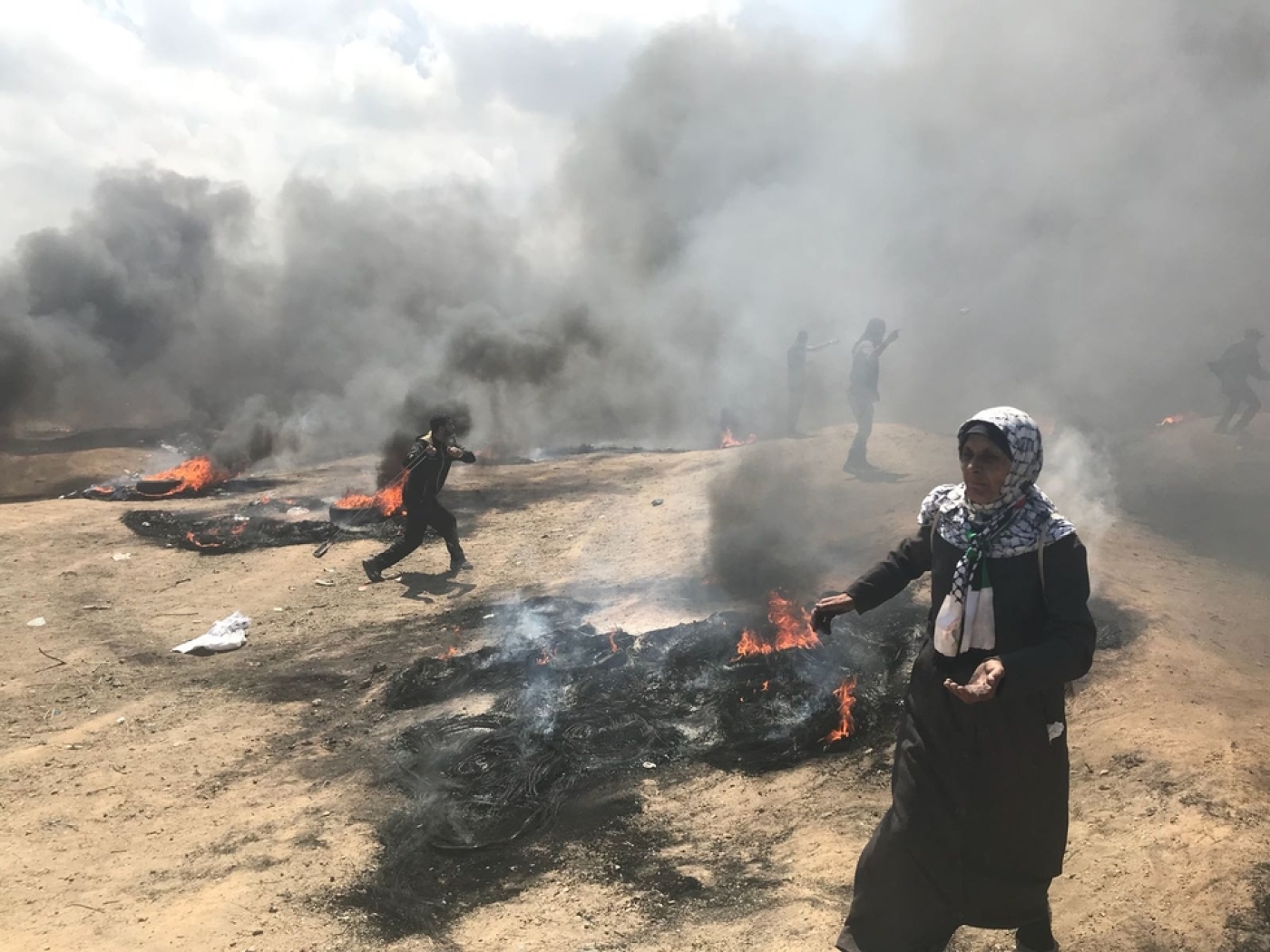 At least 58 Palestinians were killed and more than 2,400 wounded by Israeli forces in the Gaza Strip on Monday as thousands of Palestinians took to the streets across the occupied territory to mark the 70th anniversary of the Nakba, with tensions running high in Jerusalem, Gaza, and the West Bank.

While the anniversary of Palestinians being driven from their land is typically commemorated on 15 May, large demonstrations are taking place the day before to accommodate the imminent start of the Muslim holy month of Ramadan and protest at the inauguration of the US embassy in Jerusalem.

US President Donald Trump’s decision to move the embassy last December has deeply angered Palestinians, who regard it as official US recognition of Jerusalem as the capital of Israel and open support for the Israeli government, to the detriment of any peace negotiations.

The status of Jerusalem has long been a point of contention in the Israeli-Palestinian conflict: the Palestinian Authority (PA) wants East Jerusalem to be its capital as part of a two-state solution, but Israel wants the whole city as its capital.

The Nakba - or catastrophe - saw 750,000 Palestinians displaced from their homes during the creation of the state of Israel in 1948.

Their descendants now number five million refugees, including more than two million in the occupied Palestinian territory alone, who have been calling for an end to the Israeli occupation and the right to return to their homeland.

According to Israeli police spokesman Micky Rosenfeld, thousands of police officers were deployed in Jerusalem on Monday in anticipation of the embassy inauguration ceremony.

Nonetheless, Palestinian residents of the city demonstrated ahead of the ceremony. In Baten al-Hawa in the neighbourhood of Silwan - located just outside of the Old City - Palestinian protesters were met with force by the Israeli police.

Israeli forces also prevented buses of demonstrators from leaving the Old City to head to the US embassy - located in the building that formerly hosted the US's consulate.

Demonstrators in Gaza, who have been gathering for the the past six weeks as part of the “Great March of Return”, once again returned across the buffer zone near the fence separating the blockaded coastal territory from Israel.

The Gaza Ministry of Health identified 43 of those killed in mid-afternoon, but the death toll continued to rise, eventually reaching 55.

The Israeli army meanwhile reported that it had killed at least three Palestinians in an airstrike near Rafah, claiming that they attempted to place an explosive device near the fence.

More than 2,700 people have been wounded by Israeli forces across the territory, according to the ministry.

MEE correspondents on the ground in Gaza reported that Israeli forces stationed behind the fence have been heavily firing live bullets into crowds since the morning, in addition to small drones dropping tear gas canisters above the demonstrators.

According to the ministry, Israeli forces have killed at least 90 Palestinians and wounded more than 11,000 since the beginning of the march on 30 March. The international community has denounced the army's excessive use of force.

Palestinians leaders, whether in the occupied territory or from the community of Palestinian citizens of Israel, accused the Israeli army of carrying out a "massacre" in Gaza.

"A massacre is taking place against unarmed civilians in Gaza. What were [US Ambassador David] Friedman and [Jason] Greenblatt thinking about by choosing #Nakba70 for their shameful celebration of hate? Israeli government must be held accountable. Stop the massacre," tweeted Ahmad Tibi, a Palestinian lawmaker in Israel's parliament.

Ayman Odeh, the leader of the Joint List, which mainly represents Palestinian citizens of Israel, condemned a "bloodbath" while Hamas spokesman Fawzi Barhoum said Israel was threatening Palestinian protesters with "killing and terrorism".

Amnesty International denounced the Israeli army's violent repression of the Gaza protests as "an abhorrent violation of international law".

“This is another horrific example of the Israeli military using excessive force and live ammunition in a totally deplorable way," the organisation said in a statement. "This is a violation of international standards, in some instances committing what appear to be wilful killings constituting war crimes."

West Bank protests: 'Jerusalem is more than just a city to us'

Meanwhile, Palestinians demonstrated across the occupied West Bank on Monday, as at least 1,200 Israeli soldiers were reportedly deployed to counter the protests, using tear gas and sound grenades against protesters.

Many Palestinians were arrested early on Monday morning ahead of demonstrations, according to local media, while several roads and village entrances were closed by Israeli forces to prevent Palestinians from joining demonstrations.

In Ramallah, north of Jerusalem, protesters tried to cross the Qalandia military checkpoint but were met with force. A young man was shot in the village of Deir Nidham northwest of Ramallah.

In the city of Hebron, violent confrontations broke out with the Israeli army forces in the area of Bab al-Zawiya. And in Bethlehem, hundreds marched from Nissan Square towards an Israeli military base located just north of the city, only to be met with tear gas and sound bombs.

'No one was even throwing stones. But just two minutes after we arrived outside the Israeli military base, the soldiers threw sound bombs and tear gas, forcing people to run away'

“No one was even throwing stones. But just two minutes after we arrived outside the Israeli military base, the soldiers threw sound bombs and tear gas, forcing people to run away."

"We tried to avoid the gas because it was burning our eyes and hurting our chests," she said. "They fired at us, but we were just trying to express ourselves and our frustrations with the 70 years of exile we have been living and the opening of the American embassy in Jerusalem."

Allan expressed hope that more Palestinians would take to the streets on 15 May. "Jerusalem is more than just a city to us, it is a symbol of Palestine. We grew up hearing stories of Jerusalem as an Arab city, a Palestinian city, and as the future of our Palestinian state. And we protest so that it will remain this way."

The Israeli army also used tear gas near schools in Hebron city, as well as in the Bethlehem-area village of Tuqu, where students who were passing end-of-year exams sufffered from excessive tear gas inhalation.

Additional reporting from Mohammed Asad and Hind Khoudary in Gaza, Lubna Masarwa in Jerusalem, and Yumna Patel in Bethlehem. 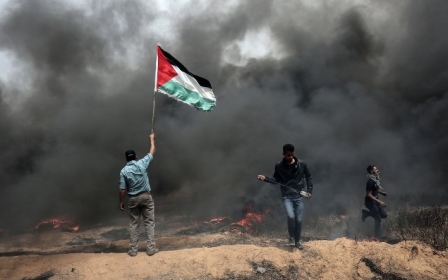