A man went on a knife rampage in a town in southeastern France on Saturday, killing two people in what is being treated as a terrorist attack.

The attack in broad daylight, which President Emmanuel Macron called "an odious act", took place with the country on lockdown in a bid to stem the spread of the deadly coronavirus pandemic.

The reasons behind the stabbing spree remained unclear, although Interior Minister Christophe Castaner spoke of the suspect's "terrorist journey" and counter-terrorism prosecutors are now leading the investigation, AFP reported.

A suspect was arrested after the rampage in a string of shops in Romans-sur-Isere, a riverside town with a population of about 35,000.

The suspect is a Sudanese asylum-seeker, 33, who lives near the scene of the attack, prosecutors in the nearby city of Valence said. He was not previously known to police, the Telegraph reported. 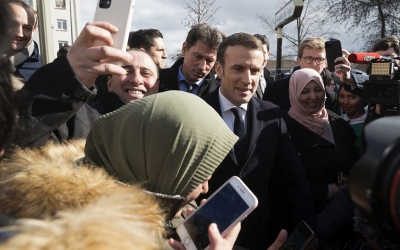 France's war on Islamism: Forcing Muslims to 'live like us'
Read More »

David Olivier Reverdy, assistant national secretary of the National Police Alliance union, said the suspect had called on police to kill him when he was arrested.

Like the rest of France, the town's residents are on a coronavirus lockdown. The victims were carrying out their weekend food shopping on the street, which has bakeries and groceries, according to France24.

The assailant first went into a tobacco shop where he attacked the owner, town mayor Marie-Helene Thoraval told AFP. "His wife got involved and she was wounded as well," she said.

The assailant then went into a butcher's shop where he seized another knife before heading to the town centre and entering another store.

"He took a knife, jumped over the counter, and stabbed a customer, then ran away," the shop owner Ludovic Breyton told AFP. "My wife tried to help the victim but in vain."

Castaner, who visited the scene, said that two people had been killed and five were wounded.

The initial investigation has "brought to light a determined murderous course likely to seriously disturb public order through intimidation or terror", according to a statement from the national anti-terrorist prosecutor's office.

It said that during a search of the suspect's home, "handwritten documents with religious connotations were found in which the author complains in particular that he lives in a country of non-believers".

One of the suspect’s acquaintances is also in police custody, the Financial Times said.

Macron was quick to denounce the attack in a statement on Twitter.

"All the light will be shed on this odious act which casts a shadow over our country which has already been hit hard in recent weeks," he said.

France is in its third week of a national lockdown over Covid-19, with all but essential businesses ordered to shut and people told to stay at home.

A total of 441 people died from coronavirus infections in France over the past 24 hours, the health ministry director said on Saturday.

The death toll in French hospitals and nursing homes since the start of the outbreak now stood at 7,560, Jerome Salomon told a news conference. The total number of coronavirus cases in France was 68,605, Reuters said.

It was not immediately clear if the attack had any link to the lockdown.