Declassified papers reveal details of British efforts to exclude Turkey and Jordan from crisis meeting, and concern that blame over Bosnia could affect trade with Arab states 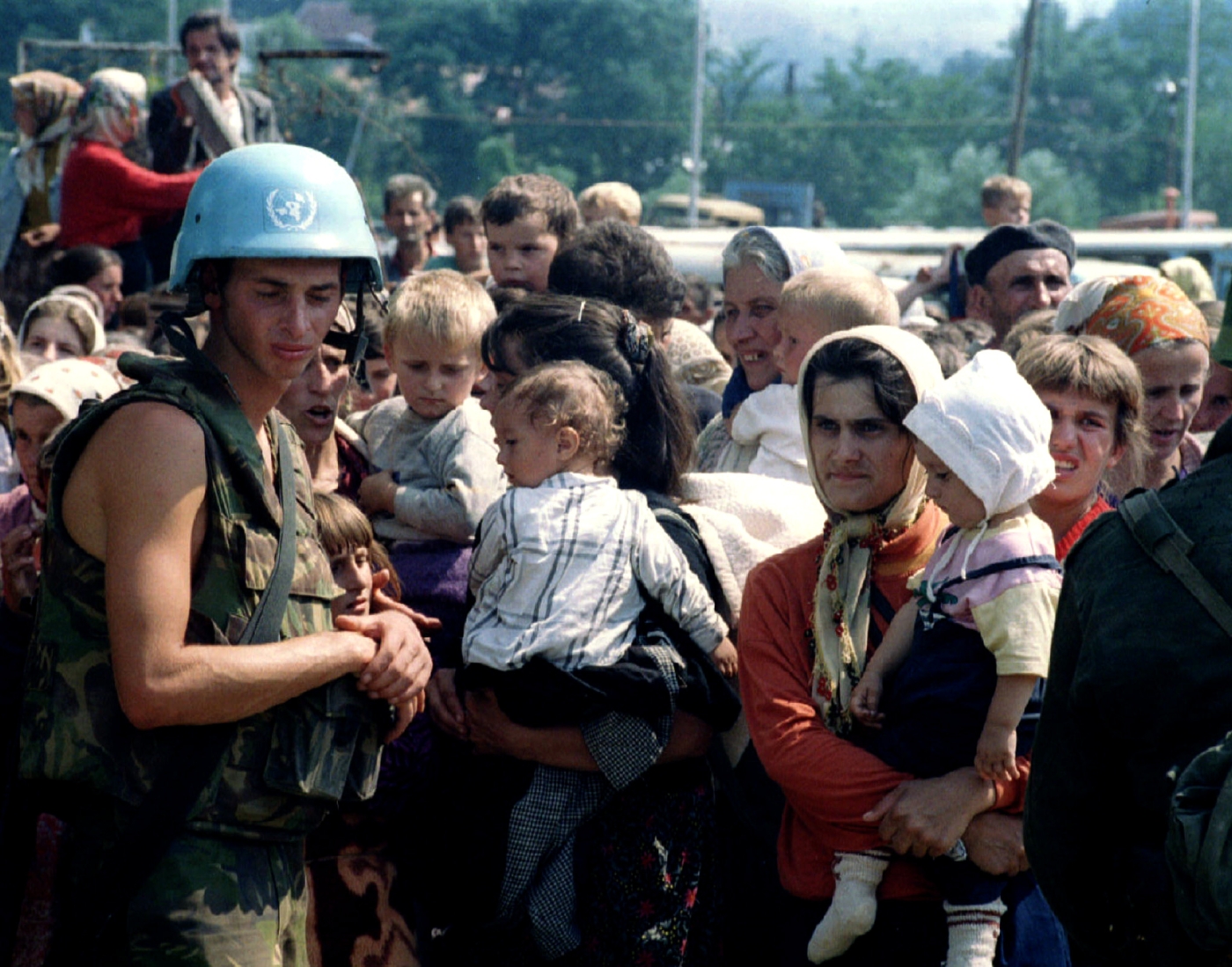 A Dutch UN peacekeeper stands guard next to Bosnian women and their children as they wait to be transported away from the village of Potocari, near Srebrenica, on 12 July 1995 (Reuters)
By
Ian Cobain
, Simon Hooper

The British government attempted to exclude a number of Muslim countries from an international conference that was called following the capture of the Bosnian Muslim town of Srebrenica 25 years ago, recently declassified papers show.

Around 8,000 Bosnian Muslim men and boys were murdered over a period off 11 days, after Dutch UN peacekeepers abandoned the town on 11 July 1995, in the last act of genocide in Europe.

While the killings were in progress, the British government was deeply anxious that its peacekeeping forces in the country should not be drawn into an armed confrontation with the Bosnian Serb forces who were perpetrating it, the released documents show.

Attempts were made to prevent both Jordan and Turkey from attending a conference in London that was intended to find a solution, despite both countries having provided significant numbers of troops to the United Nations peacekeeping force in the region.

But London was also sensitive to accusations from Muslim countries that Western nations were standing by and taking no action to protect defenceless civilians.

On 16 July, around mid-way through the massacre, British Prime Minister John Major received a memo from Edward Oakden, his private secretary for foreign affairs, which included the warning: "We must not allow ourselves to be seen as responsible for 'the defeat of Bosnia' (implications for our trading position etc in the Arab world)."

The copy of this memo that has been made public at the UK National Archives shows that someone in Downing Street marked this point with two ticks of a pencil.

The same day, the British ambassador in Amman, Peter Hinchcliffe, sent a cable to the Foreign Office in London, reporting that King Hussein had the previous day summoned ambassadors from the five permanent members of the UN Security Council – Russia, China, France, the United Kingdom and the United States: the so-called P5.

"Speaking very emotionally," Hinchcliffe said, the king had talked of his shame at witnessing "a second holocaust".

Later that day, the British embassy in Riyadh warned that the Organisation of the Islamic Conference had said it was "horrified by recent events in Bosnia" and expected the UK to take decisive action to halt ethnic cleansing.

Saudi newspapers, meanwhile, were expressing suspicion that the international community was acquiescing in genocide, the embassy reported.

In a move apparently co-ordinated with Jordan, the Egyptian foreign minister, Amr Moussa, summoned the P5 ambassadors to Cairo that day to say that "the UN had been humiliated" and that "the international community could and should not stand and watch".

Moussa said that the failure to halt the Bosnian Serbs contrasted sharply with Western action against Libya and Iraq. The British ambassador, David Blatherwick, reported to London that Moussa was "emotional and frustrated," and warned that Egypt would likely begin arming Bosnian Muslims if the West failed to intervene.

Dutch peacekeepers 'did their duty'

The Dutch troops were among 20,000 peacekeepers from more than three dozen nations who formed a United Nations protection force in Bosnia known as Unprofor.

The UN had designated Srebrenica as one of six "safe havens" where the inhabitants, mostly Muslims, needed to be protected.

However, the Dutch troops abandoned the town and neighbouring villages and retreated to their compound after 50 of their number were taken hostage by the Bosnian Serbs and threatened with execution.

Despite being aware that Bosnian Serb forces were executing Bosnian Muslims, some Dutch soldiers say they had helped to separate Muslim men from women.

On the evening of 15 July, Major telephoned Dutch Prime Minister Wim Kok to say he was outraged by comments made by French President Jacques Chirac, who had publicly described the Dutch troops as cowards. Srebrenica, 25 years on: How genocide denial is adding to survivors' pain
Read More »

The following day, Malcolm Rifkind, the British foreign secretary, wrote to Kok to say: "The United Kingdom considers that the Dutch peacekeepers in Srebrenica did their duty magnificently and with great courage. The Netherlands can be proud of them."

On 21 July, the Dutch troops retreated to Zagreb, where they later held a party.

After capturing Srebrenica, the Bosnian Serb forces soon took another "safe haven" at Zepa and threatened to attack another at Gorazde.

The United Nations would later estimate that around 20,000 people were murdered in the areas around the "safe havens" that it had established.

The declassified papers show that the British government was deeply worried by a possible attack on Gorazde, where 350 men from a Welsh infantry battalion were based.

The UK's Joint Intelligence Committee assessed that the Bosnian Serb forces could mount an attack on Gorazde within days and that the town would fall less than two weeks later.

During the week after the fall of Srebrenica, Michael Portillo, the UK's newly appointed defence secretary, sent a letter to Major giving details of a plan codenamed Operation Screwdriver to evacuate the Welsh soldiers.

The evacuation would be carried out at night, using 30 helicopters that would spend just 15 minutes on the ground. The evacuation would need to be agreed by UN commanders and would take place only once the British peacekeepers had started suffering casualties.

A few hours later, the head of the UK's armed forces, Peter Inge, wrote to Downing Street and the Ministry of Defence to report on a meeting he had attended the previous day with his opposite numbers from the US and French military, John Shalikashvili and Jacques Lanxade.

Inge advised that if the Bosnian Serbs attacked Gorazde, the best option would be to "seek a negotiated withdrawal with dignity as the Dutch have done". The UK would then need to decide whether to join with the French in the defence of the besieged Bosnian capital, Sarajevo.

With the conflict being widely reported in the world's media, the papers show Western leaders as being highly sensitive to public opinion.

Amid the flurry of telegrams, letters and telephone conversations between Washington, Paris and London, Anthony Lake, a senior adviser to US president Bill Clinton, was recorded as telling Major's private secretary, Roderic Lyne, that he would not want to intervene to save Gorazde.

"His preference would be to draw the line at Sarajevo, but he feared the way things were going, the line would really be drawn at Gorazde: CNN and public opinion would force this on us."

The declassified papers show that the British believed the French government to have been divided, with Chirac wanting more forceful action – in line with French public opinion - but his prime minister, Alain Juppe, wanting French peacekeeping troops to be withdrawn.

While the French military is also described as hawkish, the public statements of Chirac and Clinton are frequently denounced in the documents as "posturing".

The papers also show that the British – like the French – were anxious to avoid being blamed for the collapse of the safe havens and the massacre of their inhabitants.

After Rifkind decided to call a conference in London to agree an international response to the crisis, his ministry decided that while Bangladesh would be invited, having provided peacekeeping troops, Jordan and Turkey would not.

In a foreign office cable, Rifkind instructed ambassadors to "rebut strongly any allegation of anti-Muslim bias" if asked why other "Islamic troop contributors" had not been invited.

"If asked, there is no (n0) prospect of extra invitations being sent to other countries now," Rifkind wrote.

The British ambassador to Ankara, Kieran Prendergast, warned the foreign office against excluding the Turks from the talks. The Muslim world would believe they have been excluded because they are Muslims, he warned. "This is an occasion when it will be better to have them inside the tent."

From Cairo, ambassador David Blatherwick also cautioned that there needed to Muslim involvement in the conference.

From Amman, Peter Hinchcliffe pointed out that Jordan was the third-largest contributor of peacekeeping troops in Bosnia, after France and the UK – around 2,500 men.

Moreover, Jordan has "not succumbed to the temptation of seeing the conflict in an anti-Muslim context" and understands the West's problems, he wrote.

Nevertheless, the foreign office was adamant that it did not wish Turkey or Jordan to be present, in order to reduce the pressure to confront the Bosnian Serbs.

"We appreciate that the Jordanians are major troop contributors to UNPF and have been more understanding of our position than most other Islamic states. But nearly all the Jordanian troops are in Croatia. The international meeting will focus on Bosnia. It would not be sensible or practicable to hold a meeting involving all troop contributors."

In the event, Turkey was admitted at the last moment after it made a series of vigorous protests. Jordan was not.

As a result of the conference, the UN gave Unprofor commanders permission to call in Nato air strikes, and the following month Nato began large-scale bombing attacks, bringing Bosnian Serb forces to the negotiating table.

Sixteen years later, the Bosnian Serb military commander, Ratko Mladic, was arrested and sent to The Hague, where he was convicted of genocide and crimes against humanity, and jailed for life.

Radovan Karadzic, the president of the Bosnian Serb republic, was captured in 2008. He too was convicted of crimes against humanity and genocide at Srebrenica, and sentenced to life in prison.

Even after 25 years, some of the UK's official papers from the period are being withheld, on national security grounds.